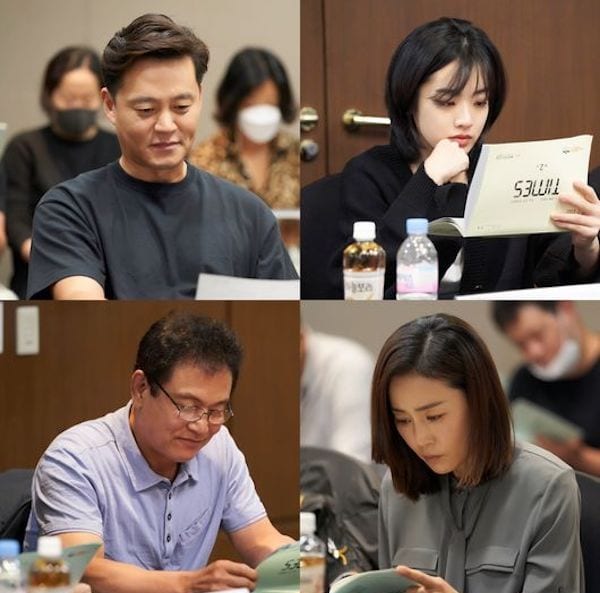 Stills from the first script read of Times have been released, featuring Lee Joo-young (Itaewon Class), Lee Seo-jin (Trap), and more. OCN’s Times is a 12-episode fantasy and political thriller about two reporters from different timelines that can somehow communicate on the phone.

Lee Joo-young plays a passionate reporter in the 2020 timeline, whose father is the president of Korea. Played by Kim Young-chul (My Country: The New Age), this president has been burdened with the truth (we’re not privy to what that truth is just yet). He is a former reporter who became an honest politician that doesn’t overlook crime or corruption.

Lee Seo-jin plays a reporter in the 2015 timeline, who is somehow able to communicate via phone with Lee Joo-young in 2020. Together, they try to prevent the assassination of her father and uncover a dangerous truth. 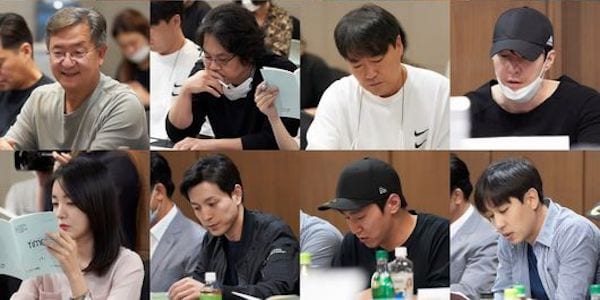 Lee Seo-jin’s character is a reporter who is firm in his convictions. He’s resolute and he’s also a tsundere who can’t turn away people who want help to seek the truth. Moon Jung-hee (Search) plays Kim Young-chul’s staunch supporter, who becomes the next presidential candidate as the story progresses. Her political goals are directly transparent from the beginning.

Song Young-chang (The Lies Within) plays a former president that was involved in corruption. Kim In-kwon (Mr. Queen) plays a founding member of the media company Times that supports Lee Seo-jin and Lee Joo-young as they seek to find the truth.

Representing the actors, Kim Young-chul said a few words at the script read: “With every episode, we promise to consistently review and ponder over how our characters have deepened and how to best express their feelings.” Director Yoon Jong-ho simply said, “We will create history in the time-warp genre.”

What's with Timetravel theme pandemic in K drama universe this year? They want to cheat 2020 huh? Forget the year ever existed.

Interesting that the 2020 timeline is preventing the assassination and not the 2015 timeline.

I love Seojinnie, but the only drama that has been my cup of tea enough to watch is Marriage Contract (*shameless plug* go watch it. So good). This could be interesting, although it'll be behind all my other cop/political/non-romance shows I still need to get to lol

Marriage Contract surprised me because I wasn't a fan of Uee but she was excellent in that drama.

LSJ's other drama I loved was "Lovers" but just couldn't stand the FL's acting.

Oh, I have that on my list. I forgot he was in that. Hopefully it won't seem too dated lol

@crysta Marriage Contract is one of my faves! I fell in love with Uee there and he was such a phenomenal male lead.

Too soon after Kairos.
"We will create history in the time-warp genre." More like re-create.

I'm putting the great cast who mostly behind the acting during the 2020 K-drama hits/blockbusters + The Uncanny Counter without evil spirits + a bit of OCN's Train + a lot of Kairos around the plotlines = excellent fitting to one of the first-ever much-anticipated OCN/cable hit dramas of 2021.

I have trust issues with Lee Seo Jin after his last OCN drama Trap. His character even has similar jobs 😱.

I will try to watch Times. It has both Lee Seo Jin and Sung Dong Il from Trap 😂. Anyways...I do feel that it's too close to Kairos. Kairos set the bar high for any future time-related kdrama thrillers for me. Fighting Times!!!

Finally,I feel attracted to a time traveling drama!
Also, so happy for Lee Joo young to be the FL! Good for her!
I liked her character a lot in WFKBS