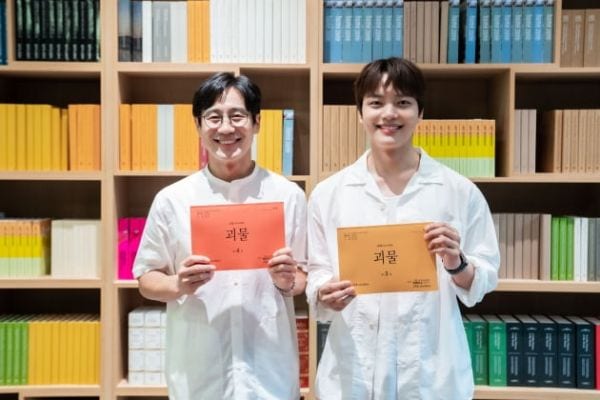 The script reading for JTBC’s upcoming drama Monster was held on December 3. Shin Ha-kyun (Soul Repairer) and Yeo Jin-gu (Hotel Del Luna) co-star as the police duo who use whatever means necessary to pursue a serial murderer, breaking laws and principles along the way. As the case unfolds and the dark sides of multifaceted individuals are unveiled, the drama explores the question of what it means to be a “monster.” Am I a monster? Are you a monster? Are we all monsters?

Shin Ha-kyun plays an eccentric veteran cop at a countryside police station. At one time, he was a rising star violent crimes detective, but now, he’s functionally an errand boy at the Manyang police station. When he partners up with Yeo Jin-gu’s character, he’s faced with the serial murder case that changed his life twenty years ago, and his peaceful existence is once again shattered.

Yeo Jin-gu plays an elite detective who comes down to Manyang police station, hiding a huge secret of his own. He comes from an influential cop family, with his father being considered to be the next Chief Police Commissioner. Yeo’s prestigious father will be played by the charismatic Choi Jin-ho (Awaken). So Yeo Jin-gu’s character has lived his life on the easy tracks until he gets sucked into a case that threatens to change everything. 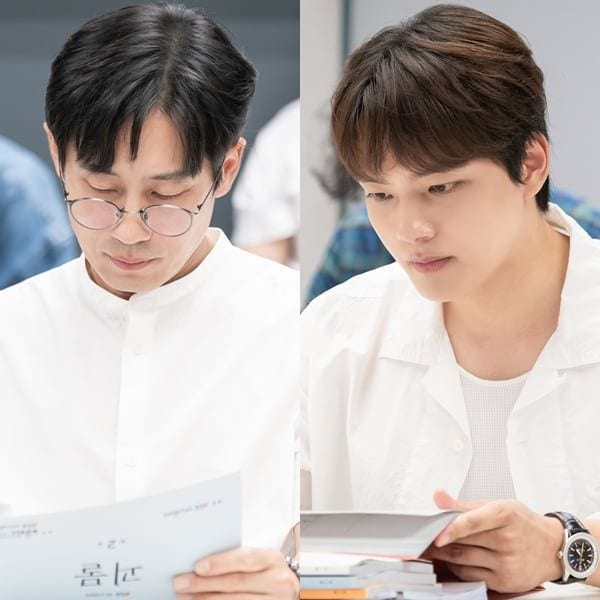 Despite their simple way of life, the villagers become close-mouthed and insular as Yeo Jin-gu and Shin Ha-kyung begin to investigate the case. Of prominent figures in the village, there’s Choi Sung-eun (SF8: Joan’s Galaxy) who plays the chic owner of a butcher shop, nicknamed the “Master of the Knife.” Lee Kyu-hoe plays the good-natured owner of Manyang’s grocery store.

At the police station, Chun Ho-jin (Once Again) plays the chief officer. Other people in the Manyang police station family include Sohn Sang-kyu (Repairing Living People), Baek Seok-gwang (Mysterious Il-seung), and Nam Yoon-soo (Birthcare Center). Sohn plays a police sergeant who leaves like a bullet whenever it’s time to clock out. Baek plays an ambitious police lieutenant with his eye always on his next promotion. Finally, Nam plays Manyang station’s maknae police officer. 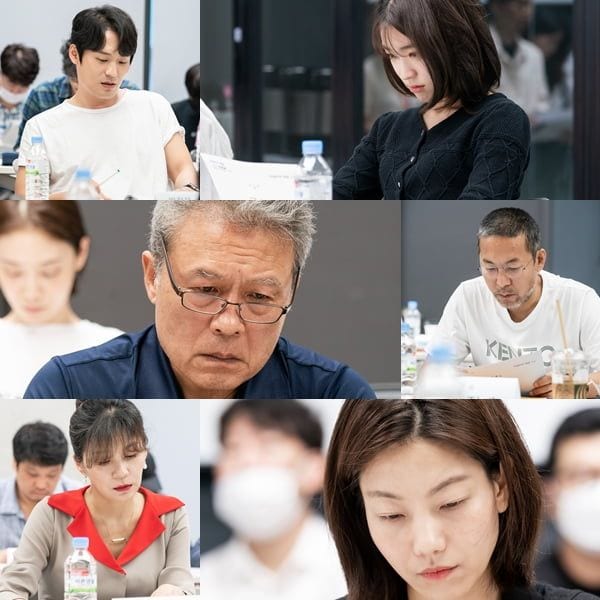 Shin Ha-kyun’s character also has strong ties to Munju, a nearby city. Choi Dae-hoon (Do You Like Brahms?) plays Shin Ha-kyun’s childhood friend and police lieutenant for the Munju city investigations team. He’s also the son of the leading candidate for Munju city’s mayor, played by Gil Hae-yeon (Do You Like Brahms?). Gil Hae-yeon’s character is a Munju councilwoman well-known to be an icon of ambition.

Kim Shin-rok (The Cursed) plays another person in Shin Ha-kyun’s sphere. She went to elementary, middle, and high school with him, and currently works as a violent crimes detective in Munju. Finally on the Munju side, there’s Park Ji-hoon (Tell Me What You Saw) who plays Yeo Jin-gu’s high school tutor and current Munju city prosecutor.

Directed by Shim Na-yeon (A Moment at Eighteen) and written by Kim Soo-jin (Mad Dog), Monster will begin airing in February 2021. 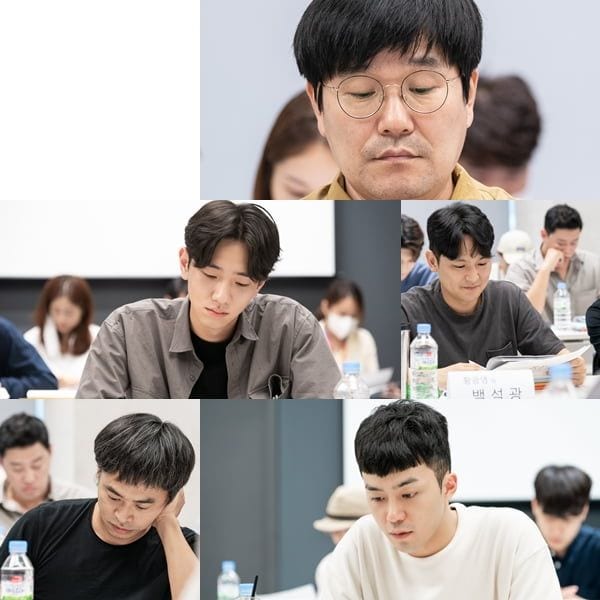 Yeo Jun gu playing a 'elite' detective. Why not just call him genius and show him graduating the academy at 12.

Yes, I am laughing very loud at this casting choice.

Every part of the description sounds familiar. Almost everything that is permissible under the rules of kdramaland has been done so many times before that writers are reduced to just recycling pieces. Sigh.

The story sounds familiar BUT I like the cast and Yeo Jin-gu can act. So thats a yes for me.

I do my own share of complaining about lack of kdrama originality but to be fair, in the last five years, the number of shows which were genuinely original as to plot, structure, theme and/or characters can be counted on one hand with probably a couple fingers left over, but during that same time period there have been, conservatively, two or three dozen shows which can be legitimately described as ranging from very good to outstanding. So the strong majority of shows we love are, in fact, lacking in originality.

Exactly! IMO, kdramas are all about execution. My favorite drama was one that wasn't at all original on paper but made this site fall in love with it, so I never judge a drama on its bare synopsis.

I don't think the issue of originality is limited to K-drama, and I agree that execution is everything. This is especially true of genre TV or cinema, including content from, say, the golden age of Hollywood film noir or westerns.

As for K-drama, tbh on paper Marriage Contract, Stranger and Nobody Knows sounded pretty cliched to me, yet all are brilliant shows that have found fresh and compelling ways to tell their stories. Ultimately, as long as a show has a something true and interesting to say, I don't really care if the story is a million years old.

Of course Monsters could turn out to be quite awful, like Alice...

Back on August 10, 2020 on the first DB NEWS post for MONSTER (on MDL listed as FREAK), this was my comment:

I am watching and enjoying JTBC’s THE GOOD DETECTIVE which has a young(ish), wealthy detective with a higher rank (iirc) (Jang Seung-jo age 38 in rl) partnered with an older detective (Son Hyun-joo age 55 in rl). I believe their characters reflect their actual age. Maybe SJS is playing someone a bit younger. They are not chasing a serial killer.

Now here in JTBC’s upcoming drama MONSTER we will have a very young, wealthy detective with a higher rank (Yeo Jin-goo age 23 in rl on 13 Aug. Happy birthday YJG!) partnered with an older detective (Shin Ha-kyun age 46 in rl). Granted we don’t know what ages both characters will be playing. However we have a 23 age gap In rl here.
What kind of police experience can YJG’s character have? Did he even complete his military service?
Crime is my favorite drama. I am enjoying three crime dramas right now, TGD, TRAIN and FLOWER OF EVIL.
I loved MAD DOG and thought YJG was outstanding in THE CROWNED CLOWN.
I will wait for more information on this.

This is the more information I have been waiting for and my thoughts are still the same.
Crime is my favorite genre and I am sure I will be there when MONSTER/FREAK airs always with a caveat on availability.
I have not seen any of PD Shim's work.
I continue to wait for more information on this.

YJG is best in non romantic roles so I will check it out.

It was the actors and the director who took a weak script in HOTEL DEL LUNA and made it a great show. Yeon Jin-gu was one of those very good actors. This show may have a lot of over-used, even cliche, tropes but his casting bodes well for this drama. I may or may not watch it (I seldom watch police procedurals) but I would not hesitate to suggest to anyone who likes such shows to try it.

According to asiawiki, this writer also wrote The Light in Your Eyes, Weightlifting Fairy, and Awl. This could be fantastic!

Isn't this the almost same plot for Mouse which airs at the same time?