The cast and crew of SBS drama Penthouse is gearing up for season 2 and a new video teaser has been released featuring the main cast. The first season of Penthouse was a big success for SBS, surpassing 30% in ratings and also ranking number one as most watched drama for seven weeks on Korea’s streaming platform Wavve.

The second season picks up from where the previous season left off and continues to explore the upper class residents of a luxury penthouse as they war over social status and all the trappings that come with great wealth. For season 2, the main question being how far people will go for the sake of revenge and to protect their children – and to satisfy their own greed and ambitions.

Most of the main cast make an appearance in the newest video teaser, with Kim So-yeon (Mother of Mine) and Yoon Jong-hoon (Memorist) back as part of one family unit, Eugene (All About My Mom) and Kim Hyun-soo (Solomon’s Perjury) as mother-daughter, and with Eom Ki-joon (Heart Surgeons) and Kim Young-dae (Cheat on Me, If You Can) as father-son. Their fellow cast members Bong Tae-kyu (Doctor Detective), Shin Eun-kyung (An Empress’s Dignity), and Park Eun-seok (Doctor Prisoner) also make an appearance in the video.

Spoiler: click to show
Season 1 ended with a win for the villains. Eom Ki-joon was revealed to be the person responsible for the death of his wife, played by Lee Jia (Penthouse, The Ghost Detective). Kim So-yeon was shown to have covered up her crimes using her wealth and power. And Eugene was left dying.

The new teaser takes us through a wild sequence of events. As the calculating Eom Ki-joon declares, “I think I met my true soulmate for life,” we see prima donna Kim So-yeon performing on stage, looking very glamorous. Behind the curtains, she slips and catches herself on a railing. She looks up in tears at an unknown person off screen.

Cut to Eugene sneaking around, and someone calls to her, “Oh Yoon-ah!” and Eugene speaks to Kim So-yeon, “Why are you so scared, Chun Seo-jin?” Meanwhile, Kim Hyun-soo is still getting terrorized at school and she wearily complains that she keeps getting ostracized again and again. The ever empathetic Kim Young-dae starts to explain, “Rona and I…” But a female voice responds, “We don’t need to be uncomfortable with each other.”

We jump to a poker night where Yoon Jong-hoon, lawyer Bong Tae-kyu, and nouveau riche Shin Eun-kyung are seated together. Bong looks in shock at the contents of the briefcase and agrees, “That woman really was something else.” Kim So-yeon confronts husband Yoon afterwards and he scoffs, “My coming back must really be worrying to you.”

Spoiler: click to show
The police start to announce that, “The culprit who killed Shim Soo-ryun is…” and it cuts to the disguised Park Eun-seok.
Reassuring someone off-screen, he explains, “Don’t worry, I’ll take care of them.” And we see someone getting kidnapped and trying to escape.

The teaser comes to an end with a close-up on Eom Ki-joon as he smiles and pays a compliment, “Just as I thought, you really are an impressive woman.” It cuts to Kim So-yeon immersed under icy water and Eugene throws down the gauntlet (again), “I still haven’t started anything yet.”

Since Penthouse was so huge for SBS, suffice to say there is a lot of anticipation and pressure for the next season. But we’re in reliable hands with the production team continuing to be led by PD Joo Dong-min in the director’s chair and writer Kim Soon-ok penning the scripts.

The new season for Penthouse premieres next month on February 19, and will be airing Fridays and Saturdays on SBS. 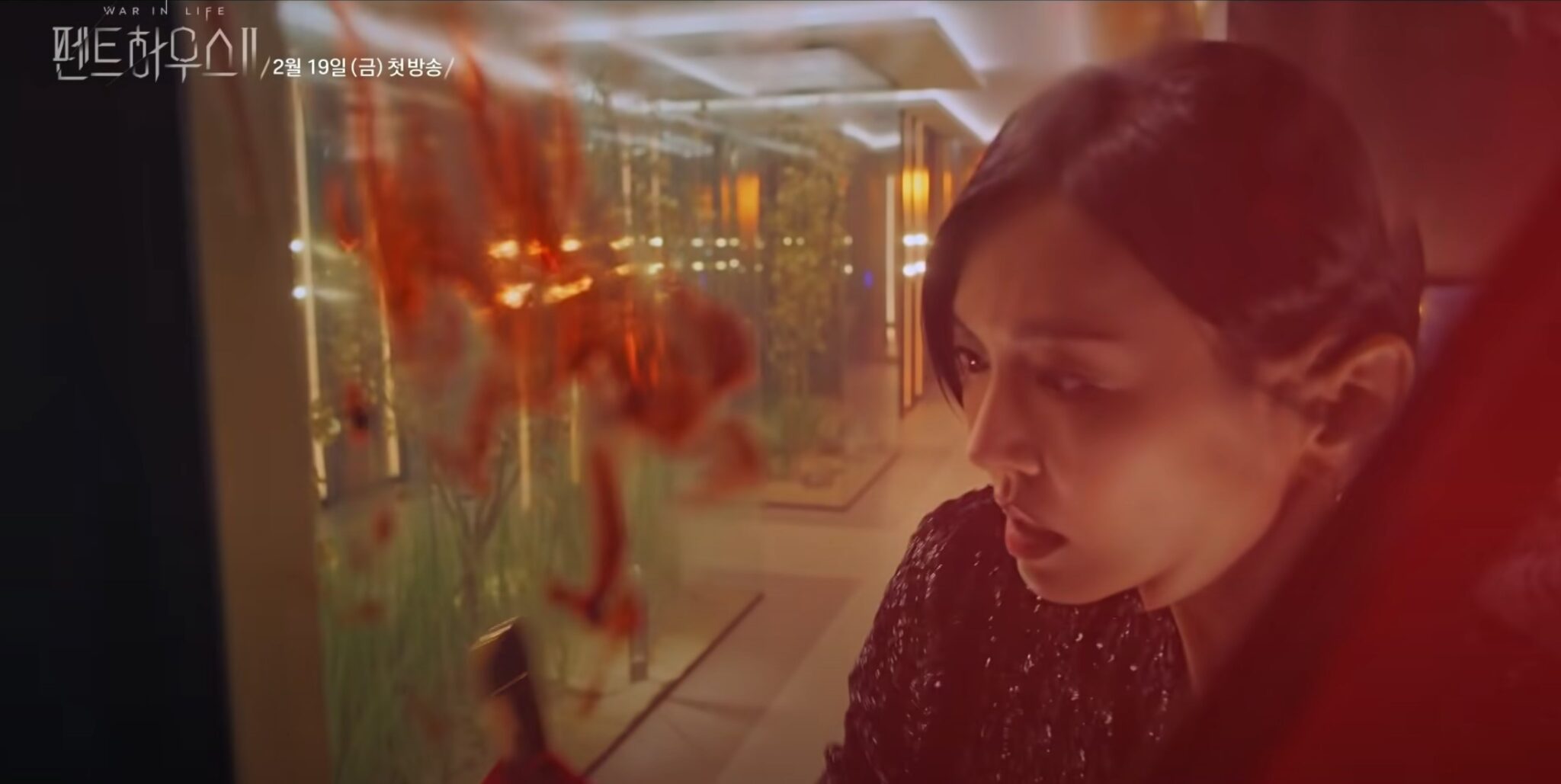 I haven't seen much about the first season of Penthouse on DB, can anybody brief me on what was good and bad about it? I'm considering picking it up before the second season airs. Thanks!!

I don't think a lot of beanies have watched it. I have seen the first episode and dropped it. It was just too makjang for me. Check it out and see if it suits your taste.

Same here.
Currently watching Homemade Love Story and the level of makjang in that one is my limit.
I mostly read comments on youtube under preview videos of penthouse and basically most people are complaining at the level of toxicity.
Watch it only if you like to raise your blood pressure.
I'm sure the show is really good and totally addicting but I'll pass the ride.

If you like a lot of drama, it is for you. I had "dis is tew much" reaction around episode 8 and stopped. It was a lot.

If you like the crazy makjang then, you will like it too. It is an over the top nonsense with a lot of screaming and violence. It is intense and fast paced drama. The actors are doing a good job.
Too bad that I hate this genre. I stopped at ep 4 and watched just Kim So yeon`s scenes without caring what is going on.
If someone enjoys this genre will tell you it is worth it. The others will hate it with a passion. I sugest to watch and see for yourself.

It was very makjang and there were a ton of shady, terrible people, but I still liked it. Twisty, over-the-top, moved at a good pace.

I had a couple of people to root for so that helped. The good guys were pretty clever for most of their plans. I also wanted to see how the villains will go down and get their comeuppance. The finale was obviously a cliffhanger for the second season though.

I haven't seen Kim So Yeon in a while, but her acting was insane.

The bloody piano scene. She really looked deranged. It's really funny that she and basicly all the other characters in this Penthouse walk around with blood all over them. The security is very lax 🤣

If you’re in the mood for loud over the top makjang, give it a go. It is not a subtle show.

Don't get me started about what was bad about it............greedy, corrupt, selfish adults with atrocious children, and so much shouting and screeching and weeping on every episode. I got totally hooked - just couldn't believe how horrible every character was - but can say with great pride that I DID manage to give it up two episodes before the end. And now they are doing a second season, so I'll have to go back and see how the first one ended. If there is any logic, every single character will either be dead, in prison, or in foster care and there should be a completely new cast. But some of the clothes were quite cool. On the good side.

That does not sound like a hole I want to dig myself into.. I'll avoid Penthouse to keep myself from getting hooked like you.

In The Penthouse Special, Lee Ji-ah neither confirmed nor denied whether her character really died, so I'm still holding out hope. I also wished for Min Seol-a's killer to be a twist, but all the actors agreed Oh Yoon-hee is the killer, including Eugene.

If Joo Seok-hoon and Joo Seok-kyung study abroad, then I hope the twins will meet Joo Hye-in in the States and team up to avenge their mom.

I doubt Seok kyung would want to help Hye In, the only people she cares about are her brother and father. I doubt they will meet though, I think Logan will take care of her and she will turn out to also have a great classical singing voice and also go to Cheongah, lol

LOL. True. I also predicted that Hye In will go with the others at Cheong ah high school too. For a person who was in a comatose state all her life (16 years) it was a miracle that she woke up. But in the crazy makjang world everything is possible so, she spoke already after a few hours. The next step is to learn classical music while she recovers in US. LOL

If Joo Hye-in goes to Cheong-A Arts High School, then I hope she will disguise herself and change her name like Gu Ho-dong in order to get revenge in secret and stay lowkey to not be bullied. Maybe befriend Bae Ro-na.

I think Shim Soo Ryeon is dead. Is the mum for the twins revealed yet?

She better be death or the show will be more ridiculous. Another character for Lee Ji ah could be good. This new character could be more interesting.

In my imagination there's another Lee Jiah. And this Lee Jiah is the twin mother 😆.

The most popular knetz' theory is Lee Ji-ah will play the butterfly tattoo twins' birth mom in Season 2, but I'd rather Shim Soo-ryeon be alive and pretend to be her doppelgänger.

My wish is for Sungrok to pop up in one season and claim the twins are his. Imo, the twins look so much like him and Lee Jiah 😂. I somehow feel the twins were cast to match the parent cast and it's a known fact that Sungrok was initially confirmed as Ju Dan Tae before the schedule and cast reshuffle. Honestly...I just want to see Sungrok and Uhm Ki Joon villain battle. Imagine Lee Jae Kyung from My Love From Another Star vs Cha Min Ho from Defendant hahahahaha 🤣.

And being the top-teir musical actors they are...UKJ x SSR can have singing battles. They can also battle with Ha Do Kwon aka the singing instructor and also with Logan Lee, who is also a musical actor 😂. Make it happen Kim Soon Ok writernim. Please.

It will be fun to watch a musical episode as a parody. You really like this genre that you are so eager to see Shin Sung Rok in this drama. I get the impression that you regreat that he is not in Penthouse. I think he made a very good decision to choose Kairo instead of this makjang. Despite low ratings, Kairos was ten time a better drama choice for him. I bet Kim Sun Ok will want him in her other makjang fest, so your wish could become true.

I want him in both because I want him in dramas 🤣. I really like Kairos. I conclude makjang is not really my genre because I didn't really watch Penthouse because I was busy watching Kairos multiple times until the new ep came out 😅.

To my surprise, I enjoyed this makjang-fest more than I thought I would so I'm totally looking forward to the second season.

Its highest nationwide ratings was 28.8%.

I just completed S1. As I commented in the last Open Thread, this was so over the top it felt like dark comedy. The characters here were caricatures, they made unbelievably stupid decisions, and they tend to create more problems for themselves. That said, I couldn't resist watching episode after episode.