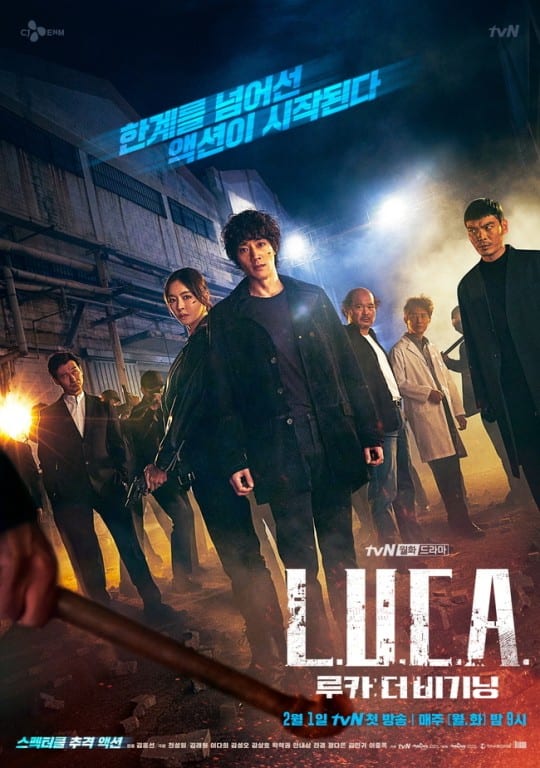 New promos have been released for tvN’s new action sci-fi L.U.C.A.: The Beginning, including a new poster and a behind-the-scenes video teaser.

The drama stars Kim Rae-won (Black Knight) as a man possessing special powers who suddenly finds himself on the run. The complication though, is that he has no memories of his own identity, and has no idea who his chasers are or why he is being chased.

The only person who seems to remember Kim is Lee Da-hee (Search Query: WWW), a police detective in the violent crimes unit. The details are still unknown, but the two decide to team up and fight against the conspiracy that has grown around Kim Rae-won’s character.

The main opposition comes from fellow police detective Kim Sung-oh (Graceful Friends), who is the head of the violent crimes team. Like an animal on the hunt, his determination to catch Kim Rae-won is a force to be reckoned with.

Also desperate to find Kim Rae-won is a biotechnology research team who are involved in a top secret project. And the search is headed by scientist Park Hyuk-kwon (Extracurricular), director of the labs Ahn Nae-sang (Do Do Sol Sol La La Sol), and founder of the research company Jin Kyung (Romantic Doctor Teacher Kim 2).

In the newly released teaser, we get a peek at Kim Rae-won in some of the drama’s action sequences: explosions, fights, and chases galore. And we also get a look behind the camera, and see how practical and digital effects are being used to film different scenes.

The intercutting text screens announce that this is, “tvN’s first action drama in 2021!” And that the “Action scenes push beyond the limit!” The video comes to a close with Kim Rae-won’s narration, “L.U.C.A.: The Beginning premieres February 1.”

Written by Chun Sung-il (Your Honor, The Package) and directed by PD Kim Hong-seon (The Guest, Black), tvN’s upcoming Monday-Tuesday drama L.U.C.A.: The Beginning is currently set to air next month on February 1, 2021. 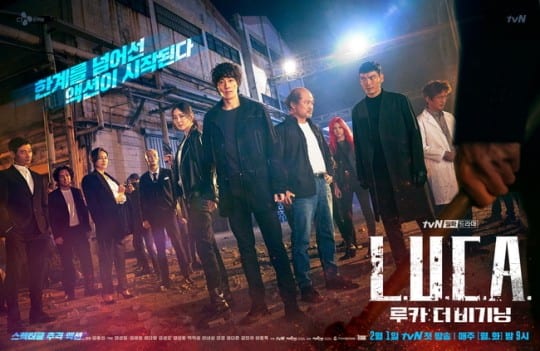 Sounds rather Jason Bourne-esque, being chased and not knowing why. The last thing I saw Kim Rae-won in was indeed the aforementioned Black Knight, which, just..I...honestly, I'm not really sure what that even was, but I did angry cry at the last episode because for some unfathomable reason had watched to the end, somehow believing the show would start making sense.

Anyway, I digress. This isn't generally my genre, but somehow I'm curious!

HAHAHA.
Your comment regarding Black Knight made me laugh out loud. Given the ratings in Korea, I also suffered the 20+ hours of that show. To this day I'm traumatized.

Like, what even was it? I got the premise - though far-fetched - at the beginning, but then it was like someone had a massive personality change, and the writing just took off like it had suddenly become a completely different drama. One of my few regret watches.

Jason Bourne popped into my head as I read the plot, too. Teen son watched that film about a hundred times (apples falling not far from trees?).

I guess Kim Rae-won is stuck in my head as the lead from Doctors. Kim Rae-won as an action hero is kinda incongruous. Not that actors shouldn't be versatile, but it would take a lot of convincing to convince me.

The only drama with Kim Rae-won I have watched is – Doctors and another drama of his I know about is Black Knight. The first one was quite meh and I never tried to watch second one as I was warned before.
I have watched Lee Da-hee in WWW, Beauty Inside and I hear your voice. I quite liked her in all those dramas.
The plot of drama does not seem original. I don’t think I will watch this drama even for Lee Da-hee.

Why this haircut? I mean in The Uncanny Counter, the popcorns were cute on 18 years old boy... but on Kim Rae Won...

The haircut was the first thing I noticed. It looks almost like an ahjumma perm! Kim Sung-oh's haircut is a bit questionable too.

But I think I'll give this a chance, cos I like every single member of the main cast.

I watched this video before and it was more blatant in the teaser.

Not content with interfering with his DNA or whatever, the dodgy biotech people had to mess with his hair.

Will sci-fi thrillers be the trend for the first half of 2021? I guess three sci-fi dramas (this, Sisyphus, and the SiIent Sea) don't necessarily have to make a trend, but they do stand out with lead actors who started stealing our hearts in the mid-2000s - the early days of korean drama mania.

The only person interesting for me here is Lee Da-hee.
Nevertheless, I am not sure I can watch this. Da-hee-ah....I wish you good luck!

omg it does lol

I heard JCW rejected this. If this turns out to be good (hopefully), we really need to question JCW/his agency's decisions...

My ? is Kim Rae Wan is a veteran compared to JCW, and yet he wasn't the 1st choice. I guess, b/c KRW has been more low-key the last few yrs. The last drama was in 2017, he's more active in film. It's just random going from JCW to KRW, two diff. actors in age/vibe lol.