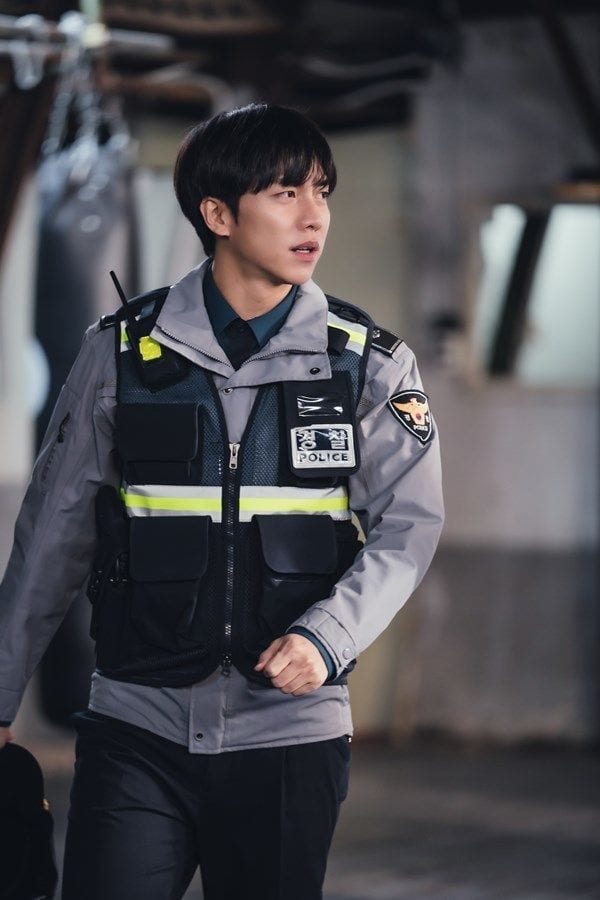 New promo has been released for Lee Seung-gi’s (Vagabond) upcoming drama Mouse. He plays the good-natured, upstanding rookie of the neighborhood police station who ends up partnering with Lee Hee-joon (Mistress) whose character is a ruthless police investigator with his mind set on revenge against the killer that murdered his parents. Together, they pursue a psychopath who is in the top percent of most dangerous and evil human predators in the nation.

Lee Seung-gi’s character is warm-hearted to the point that one of his nicknames is the “Human Vitamin” (in other words, he’s got all the goodness of a vitamin but in human form). People around him even wonder, “How can such a genuinely good person exist?” His personality shows through in the recently released stills as he carefully applies ointment to an elderly lady’s ankle and moves boxes for people in his community. As he begins to track down the most feared serial killer in Korea, something happens and his entire world is upended.

The 15-second teaser begins with a figure in a dimly lit wrestling ring. Lee Seung-gi looks dejected, as he rides in a car driven by Lee Hee-joon. Text is interspersed between scenes, saying: “That person… is hunting…humans.” A shower drain is shown, implying a potentially criminal cleanup, and Lee Seung-gi is found lying on the ground, in uniform, in the rain. An anonymous figure turns away from the scene of people gathered in the rain. Lee Hee-joon’s voiceover says: “Nobody knows, [the serial killer] might still be hunting somewhere right now.” 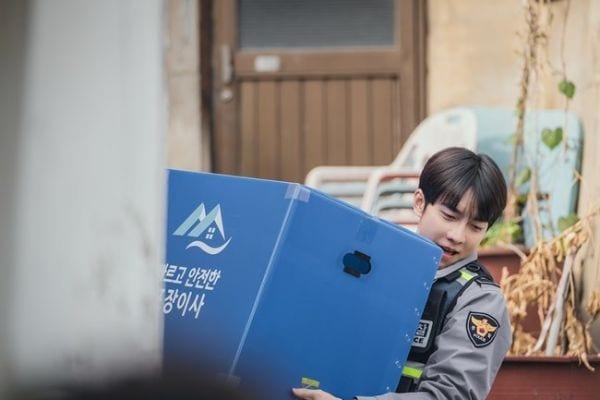 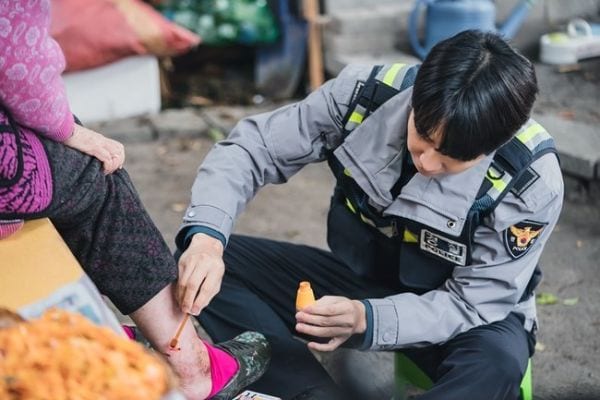 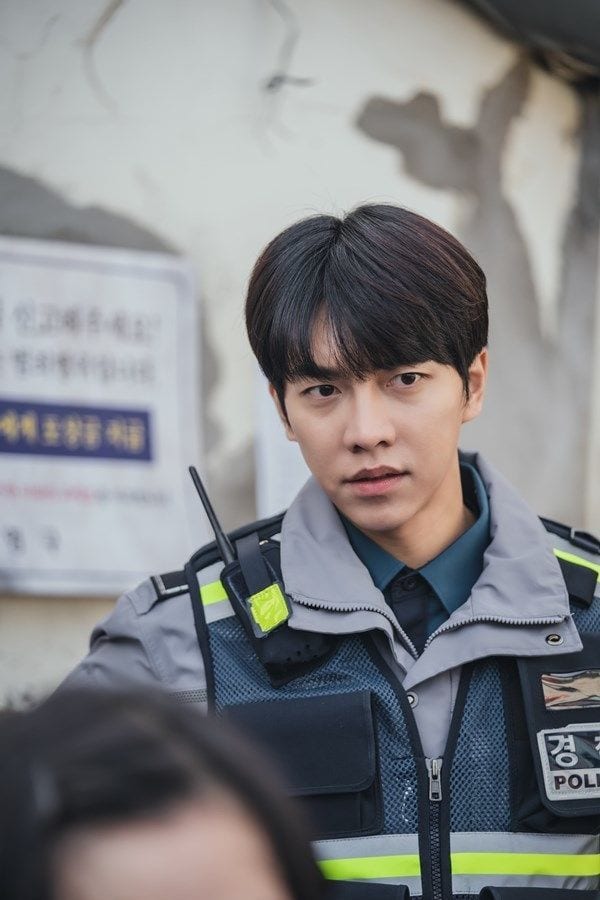 Request to Viki (US). Please pick up tvN’s MOUSE. Thank you for recently subbing tvN’s AWAKEN for us.

Nothing like LSG to make me start probably trash shows with expectations so low they hit bed rock.
*whispers* let the twist be villain LSG. come on show, do it, do it.

I fully expect this show to either make him the villain (TWIST!) or make us think he’s the villain then have him not be (DOUBLE TWIST!).......or you know, go around a plot circle and leave us where we started without resolving the story at all.

wow. The drama not even started yet but the hate... So toxic.

What hate? I love LSG. lol.

I mean the hate towards the drama... Not LSG 😑.

But rest assured, the plot is about LSG as a psychopath but he lives a normal life until one incident that triggers his true self.

Observe below the reasons for my apprehensions regarding the show's written quality ;)

If you are looking for twists, you'll definitely get them: this writer also wrote Black and God's Gift: 14 Days.

I'm just not sure whether you'll enjoy the twists being thrown at you ... also you've probably watched those 2 shows but if you somehow haven't both shows' endings drove many Beanies nuts.

Haven’t seen either shows but i already think @beffels expectations are too high 😂 I just want to to have a show of LSG that at the end i can clearly say yes I like it, go ahead n watch it!

😂 and you say my expectations are too high

I hate this writer. Both of those shows are incredible until the ending. Black is genuinely ruined completely by the last episode. It's such a piece a shit ending. So bad that it was even worse than GG14D's ending, which was really bad itself.

I want to watch Mouse and was anticipating it a lot, but this makes me very concerned. Both GG14D and Black are great shows ruined by absolute garbage endings. They are Game of Thrones S8 multiplied by infinity.

Well LSG is not new to bad endings!
P S : no hate! I love LSG and is a big fan! It's just my frustration of having his recent dramas all end in such a bad note.

I'm still traumatised from Black. Possibly even more than Big. Well, maybe the same amount as Big. Equally as traumatic. I nearly destroyed my television over both of them.

I'm a masochist for this writer's twists. They're usually really good until the end when she goes one giant leap too far and you're like WTF?! I'm in it for the journey, but not the destination which I suspect will suck.

It's LSG. I don't care about anything else I'll be watching.

Also there's a ranking for psychopaths now I guess. How does dramaland always manage to find the top ____% psychopaths in the country lol

I am obviously going to be watching this.

He hasn't had the best of luck when it comes to dramas.

His last good drama was 9 years ago with King 2 Hearts.

After that, it was Gu Family Book, You're All Surrounded, Korean Odyssey, Vagabond...

he really should ask someone to pick projects for him.

But I liked Gu Family Book and You're All Surrounded! Mostly because of the green eyes, Choi Gin Hyuk, Cha Seung-won and the bromance, but I liked them! Am I only one?

YAS had some really great moments, the chemistry of the cast was all there, it was the perfect combination really, (except the love line between Go Ara and LSG...that was tragic) but the pointless plot squandered it all away.

You’re not the only one! YAS is one of my favourites and I also like Vagabond a lot despite the infuriating ending.

I think on paper Korean Odyssey would have looked great (and could have been - LSG and CSW are always fun to watch together, Zombie is great, etc etc) but turned out only OK.

those shows that you mentioned garnered double digit ratings btw. If those dramas are not hit.. then kim soo hyun's IONTBO is a flop also?

“He hasn’t had the best luck when it comes to dramas.” When Gu Family Book and, specially, Korean Odyssey and Vagabond have given him so much worldwide appreciation 🙄😂 if you didn’t like them or didn’t find them good it’s ok but you can’t call SeungGi unlucky

Lee Seung Gi has gotten better with age. I believe the military made him more comfortable in his own skin and it shows with each endeavor he has done since leaving the military. Good for him. I hope he continues to age well like fine bottle wine. ;D

I’ve been watching old 2d1n on YouTube (because apparently watching all his dramas in a row last year was not enough LSG), and it is SO weird seeing him be a baby variety performer who doesn’t really know what to do with himself.

7 parkchuna is still an Errant 🫘

So this is a reverse of LSG’s and Ara’s characters in You’re all Surrounded then! Instead of the rookie-revenge filled-killer hunter-cop, here he’s the rookie-puppy-cop. Whatevs, I’m always in for action star Seung Gi!

I just hope there will be a satisfactory ending for the show. Hwayugi's ending made me throw something. I have not felt such negative emotions for any show since. I did not watch vegabond but going with beanies reaction I am not touching that show ever.

I actually really like Vagabond. If they had a season 2 that finished the story I’d recommend it without hesitation (if you like fun action; if you like intense realism not so much 😂). Unfortunately I think it’s very likely the pandemic will have put paid to any plans they may have had there.

His dramas since military discharge were actually pretty good they just had really bad ending. Bad ending aside, the dramas were well made. Each episode of Vagabond was action-packed and very good. Unfortunately, the “WTH?” ending was just what stayed with the viewer’s mind. It looked like the ending was made with a season 2 in mind.
I hope with his next project it won’t be action again. I miss seeing him portraying a rich guy character.

I agree. I know vagabond gets a lot of hate, and that was my reaction after the last episode, but the show was well written, produced and acted. I actually just came on here to say: THIS IS NOT VAGABOND 2! I will be very upset if they never come out with part 2. It was clearly written to be a two part series.