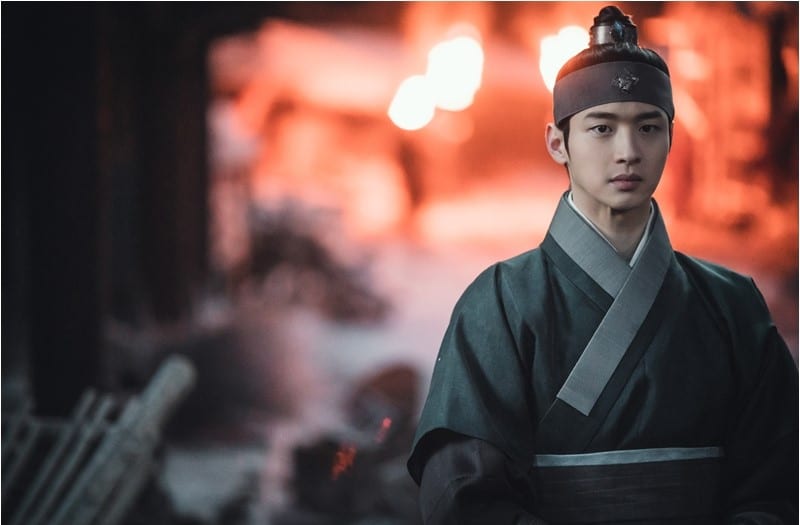 New promos have been released for SBS’s upcoming horror sageuk Joseon Exorcist, including new stills and a video teaser featuring its main cast.

The drama stars Kam Woo-sung (The Wind Blows) as King Taejo (a.k.a. Yi Bang-won), the third king of the Joseon dynasty. While taking a tour of his northern region, he comes across a man possessed by an evil spirit that came from the West and his worldview is changed when an exorcism is performed. Although the evil spirit was sealed away, it manages to break free and feeds off of human greed to gain strength and multiply across Joseon.

Park Sung-hoon (Memorials) plays King Taejo’s first son, Crown Prince Yangnyung. Although intelligent and competent in his own right, he struggles with the anxieties and pressures of being the Crown Prince. And is constantly afraid of failure from trying to fulfill his father’s expectations. These fears manifest into greed as well, not wanting to lose his position and possessions, and it leads him to agree to a dangerous contract with the evil spirit.

Jang Dong-yoon (Search) takes on the role of Park’s younger brother, Prince Choong-nyung (a.k.a Yi Do), who later becomes the great King Sejong. Having devoted his life to academics and born into a royal family, he lived a strictly sheltered life, but the growing danger forces him out of his safe bubble world. Despite his inexperience, he is quick to pick up his sword and joins the fight to protect his country and the people he loves.

The new video teaser starts with young Prince Kangnyung (played by Moon Woo-jin, Alice), enjoying a hunt accompanied by his servants and guards. He lets his falcon loose, commanding it to fly, and a text screen cuts in introducing the drama’s director: PD Shin Kyung-soo who produced Six Flying Dragons and Tale of Nokdu. As the entourage approaches a bridge, the prince declares that his bird must have already caught its prey and orders his guards to fetch it. When the guards return, the prince calls to them from across the bridge but one of the guards has been overtaken by an evil spirit and attacks the group. The servants cry to the prince to run away, but the prince stumbles and the possessed guard approaches him. In voice-over, a man reports that, “Blood sucking monsters have appeared. As they are dead but also alive, they are said to be called living corpses.”

Cut to Park Sung-hoon going to see Prince Kangnyung, who has been tied up and placed in an ice-filled room. The young prince calls out to Park, “Hyung-nim,” and the text screen explains, “A Joseon prince becomes a living corpse.” In the next scene, Prince Kangnyung is moved back to his room where a physician examines him while Kam Woo-sung and the queen standby waiting. Kam asks, “What is inside Kangnyung’s body?” And the physician replies, “If you want to save him, we need a Western shaman.” It cuts to a group of mysteriously cloaked men who bring a priest of Western origin back to the palace. As Jang Dong-yoon helps the priest, a man explains, “This is what is called an exorcism.” And Jang replies, “Does that mean the person can be brought back to normal?”

In a sequence of shots, we see the growing army of evil spirits who attack the palace and claim, “We are Azazel’s solidiers.” Park Sung-hoon confronts a large snake creature and a text screen commands, “Stand against these strange creatures and fight.” In voice-over, Kam Woo-sung orders, “You must bring a Western shaman here and save Prince Kangnyung.” And the servant commits to his task, “Even if it means risking my life, I will bring him back safely.” As the sequence continues, we see Kam, Park, and Jang Dong-yoon fiercely battling an enemy that seems to have a range of powers. And a man warns Park Sung-hoon that, “Your Highness must save Kangnyung before Choongnung in order to make this nation yours.” Jang bravely declares that, “I will stop them before I become a living corpse.” But the person who responds is not hopeful and cautions, “Don’t think that you can stop them. These living corpses are different.”

Written by Park Kye-ok and directed by PD Shin Kyung-soo (Tale of Nokdu, Six Flying Dragons), Joseon Exorcist is currently set to premiere on March 22 and will be airing Mondays and Tuesdays on SBS. 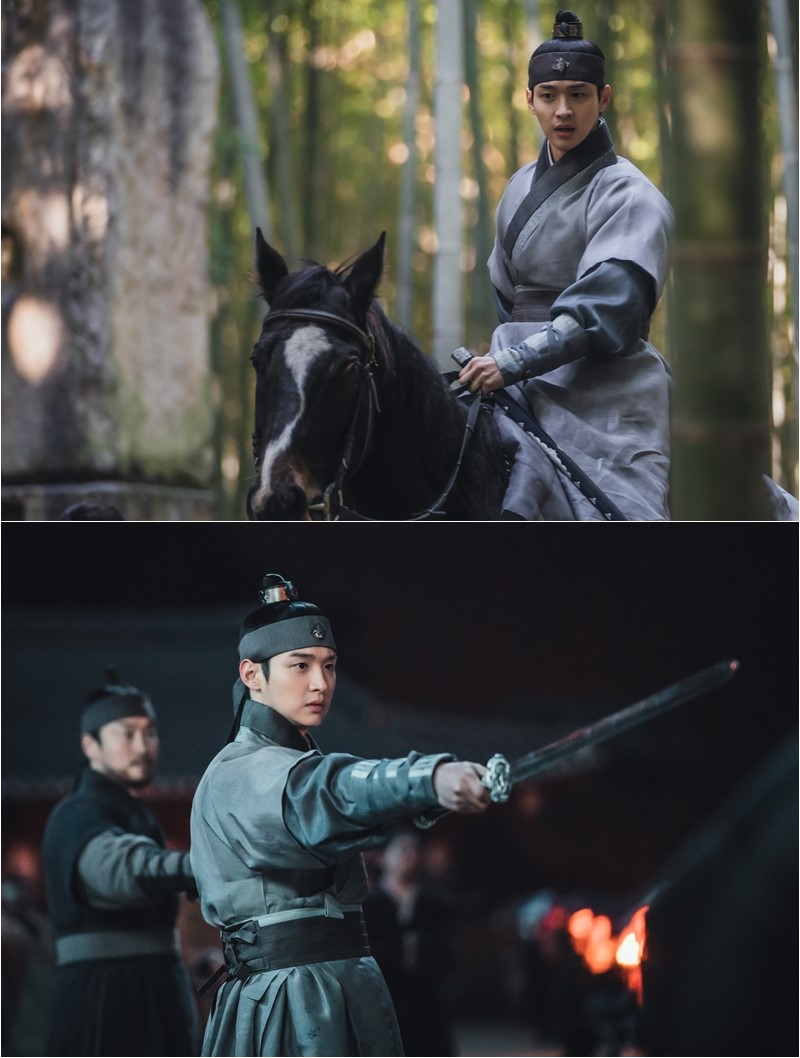 This take on zombies is really interesting to me, for various reasons, but I don't actually know if I'll watch, for uh, well the same reasons lol.
Plus, this might be the WEIRDEST adaption of these historical figures ever? Lmao. Are they gonna include the creation of hangul in it TOO? Skjdafhklj.

This makes perfect sense! It's the contact with the western exorcists & their writing that put the idea of an alphabet to represent sounds into the prince's head...

lkdfjhajsdfa *the linguist in me is so triggered right now pffffffft*

Alternatively hangul could start off as his personal shorthand to write down the incantations needed to keep the demons (zombies?) & ultra snake at bay.

I bet they'll shoehorn it in somehow...

This looks expensively produced, well-acted and genuinely scary...which is a bummer for me because I could happily watch a 100 episode drama about the development of Sejong's governing ethos and weird fraternal politics in the royal family.

Park Kye-ok, the writer of Joseon Exorcist had turned into writing another epic sageuk after Mr. Queen, this time on a epic horror. I knew that the early/first episodes will be competing by another fellow historical drama River Where the Moon Rises (KBS).

I knew that there's no legal streaming website for acquiring Joseon Exorcist yet. I think maybe on Kocowa (US) or Viki (US).

I hate zombie type horror shows, but I love Jang Dong-yoon. What to do?

I love Jang Dong Yoon too but I've never watched a zombie type horror show and will never will (except I'm paid like a million dollars to do so which is unlikely to happen) so nah...

Arf, I couldn't have enjoyed Park Sung-hoon as a good guy for long :( I will have to re-watch Memorials.

So they're not really zombies but are possessed? It always is funny to watch Catholicism in Kdrama :p

I loved Park Sung Hoon in Psychopath Diary and Into the Ring so was looking forward to his next show. But I'm also a scaredy-cat who doesn't do well with horror so this is going to be difficult to watch 😖

Unfortunately, these royal brothers won't be in it together! 😔

Exorcism, zombie-like undead creatures (or vampires???) , political conflicts AND Joseon dynasty? A big fat NO for me. Even Jang Dong-yoon can't convince me to watch this. See you in your next project Oppa!!!

If this story takes place during the reign of King Taejong (1367-1422) then it is at least 300 years too early for any kind of Christian presence in Korea. The Catholic faith arrived in Korea in the 1780s.
Perhaps this is poetic license.

What is of more immediate concern to me is availability. Will SBS’s JOSEON EXORCIST be available on a legal streaming site in the US?
I have paid (full boat) subscriptions to Viki, Kocowa, Netflix and ODK.
There have been no JE teasers on Kocowa which leads me to believe JE will not be available on Kocowa or Viki.

(For the unaware SBS together with KBS and MBC are in a joint venture and own Kocowa. I have noticed a pattern that some dramas from the Kocowa big 3 networks are not becoming available on Kocowa and thus Viki.)

If JOSEON EXORCIST does not become available on Kocowa or Viki I think it may be time for me to cancel my Kocowa subscription.

I am a big fan of Jang Dong-yoon. I loved his performances in SOLOMON’S PERJURY (2016/17), APAD (2018) and SEARCH which he may have used as training for JE.
The production looks great so I am looking forward to JE.

"Perhaps this is poetic license" - you don't say hahahaha

Sic, you caught my sarcasm. I generally try to avoid being sarcastic but I think I slipped here.

You avoid being sarcastic? Oh well, I'll make up for you then.

Thanks @ayalynn123 for the good news. I can stop ranting now.

I'm happy to be able to watch Joseon Exorcist legally!

Is this supposed to be a zombie drama?
Black eyed zombies seem new in the zombie world.

I'll definitely check it out because of the writer (Mr. Queen and Doctor Prisoner), and two main leads plus Moon Woo-jin who is one of the best child actors in Korea right now (and my most favorite).

Can this drama start now?

Jang Dong-yoon is busy these days.

It's official. Someone out there hates me.

What and you're only just realising this now? :P

No, not just realising it. Now it's OFFICIAL.

"The Great King Sejong Meets Dracula!" . . . but, seriously, if they cannot even fit a female character into the story line, I'm thinking they're taking their premise way too seriously. And I'm saying this both because I'm feminist and because I'm an adult male who likes looking at girls while I'm being entertained, not just studly men. We all require our eye candy.

PD Shin directed NOKDU FLOWER and not TALE OF NOKDU.