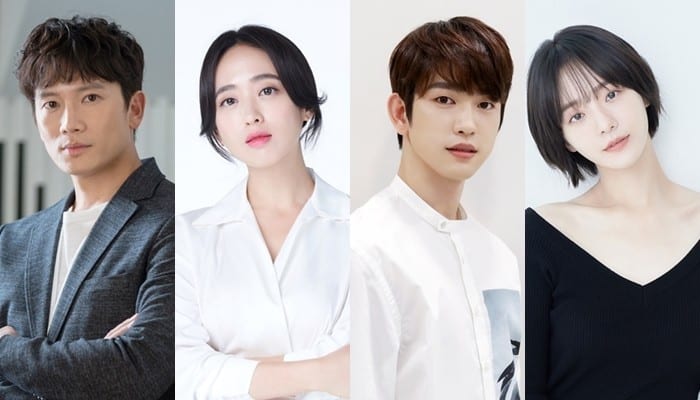 Recently, it was confirmed that Kim Min-jung (My Fellow Citizens) is the latest casting addition to The Devil Judge, the upcoming drama about a courtroom reality show where the entire nation sits as jury. She joins Ji Sung (Doctor John), marking their first reunion since the 2008 MBC drama New Heart. Ji Sung plays the titular judge of this public courtroom, and according to the synopsis, the drama will keep viewers guessing whether he’s a true hero or a two-faced villain.

Kim Min-jung’s character is the elegant, intelligent, and charismatic executive director of a social philanthropy foundation. She’s an almost bewitching character who uses the greed and ambitions of powerful people to manipulate them behind the scenes. In the drama, she’s the lifelong archnemesis of Kang Yo-han, Ji Sung’s character.

Jinyoung (When My Love Blooms) plays a younger associate judge who is part of the model trials department and seemingly the only hope for justice in this corrupt reality. He lost both parents when he was young and had a subsequently rough adolescence. Through his grit and inner strength alone, he managed to become an appointed judge. As he keeps an eye on Ji Sung’s character, he becomes confused about who is truly right.

Meanwhile, Park Kyu-young (Sweet Home) plays an ace police investigator from the regional crimes unit. She attempts to uncover Ji Sung’s secrets in order to find any potential relation to a case of hers. Park Kyu-young’s character and Jinyoung’s character grew up together almost like siblings, so they’re really good friends.

Directed by Choi Jung-kyu (Red Moon Blue Sun) and written by judge-turned-writer Moon Yoo-seok (Miss Hammurabi), The Devil Judge will begin air on tvN in the latter half of this year.

Fun fact, I've started half a dozen Ji Sung dramas, and I haven't finished a single one. Not by any fault of his (I like him a lot), I guess it's just always bad luck or bad timing. Will this be the Ji Sung drama I finish? Probably not.

Lol. I somehow end up watching and completing Ji Sung dramas. Even when dramas aren’t that good. So I guess I will be watching this too :)

I am in the middle. I have watched few of his many dramas, but I have finished them. Ji Sung is amazing, really.
I like his characters because they always have depths.

That happened to me with Doctor John. But I have finished other Ji Sung dramas without any problems. I will still check out this show because I like three of the four leads. Don't think I have seen Jinyoung in anything so there is that.

I actually quite liked Doctor John, I thought it would be the one I finished! Alas, I only made it to episode ten.

I got so far as episode 2 i think. It just did not click with me at the time. I loved him in Secret Love, KMHM and okay with STLDFM.

Save the Last Dance for Me is one I want to go back to! I watched the first two episodes, liked them, but never went back. Ji Sung was so so so so sooo brilliant in Kill Me Heal Me but I still didn't finish it 😂

Writer of Miss Hammurabi + mob boss from My Fellow Citizens... count me in (at least for day 1)

It's funny they just confirmed the cast when they started shooting last month.

Missed seeing Ji Sung in a drama last year. Glad he'll be back. He's a fave of mine.

The cast, PD and writer all look promising. I liked Miss Hammurabi a lot.

Park Kyu-young wasn't casted with Lee Jae-Wook in a drama ? It's hard to follow all this casting news sometimes.

I can't picture Jinyoung as a judge... He looks pretty young.

That’s her other project also airing in the second half of the year. I kept up with her project and she is like non stop lol she always has so many projects!!!

Jinyoung is 27 this year I think, hopefully the styling team can help him to look closer to his age. He does have a baby face

For Jinyoung, I already had issues with Go Ara, L and Park Eun Bin because they were pretty young too. But Jinyoung is young and looks super young. His last roles were teenagers/young adults ones.

Love the cast and writer. I’m in.

I am so excited for Kim Ming Jung. I like the others, but KMJ left such a favorable impression after my fellow citizens, that I want to see her shine.

I don't like courts, crime, politics and corruption, etc... But I really like Ji Sung. Soooo... maybe, maybe I will visit and see if this is a drama for me. 😅

YES! Ji Sung's finally back! I honestly can't wait; the man is perfection

New Heart was my first Ji Sung drama and Kim Min Jung was his love in that. Loved both of them in New Heart.
So it's reunion for them and chemistry wouldn't be an issue. I'm excited!

I read a description of the show. This one got a face palm.