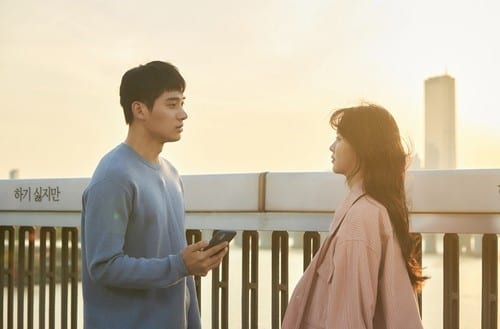 The romance drama is based on a popular webtoon by the same title (written by Chun Kye-young), and Love Alarm 2′s story takes the characters out of high school and into the adult world, four years after the events of the last season. They live in a society where love has become synonymous with the sound of the Love Alarm, a widespread dating app which prompts a notification when someone interested in you gets within a 10 meter distance. But now, the conventions of dating have been further complicated by the app’s evolution to version 2.0 which has two new features: “People you may like” and “People who may like you.”

As seen in the new stills, it’s no surprise that both Song Kang and Jung Ga-ram’s feelings still ring on Kim So-hyun’s app. And the love triangle will take center stage again in season 2. But both suitors have questions about who Kim truly likes and the situation is further clouded by a beta feature that Kim activated as the last season ended, which blocks notifications about her own feelings from sounding on other people’s apps.

On the production side, there’s been a change of directors for the drama’s second season with PD Kim Jin-woo (Suits, Healer) taking the reins. Love Alarm 2 is currently set to release next month on March 12 on Netflix. 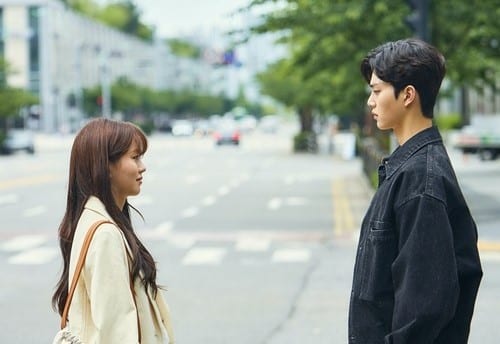 It sure took a while to get season 2.

Finally!! That took its own sweet time. But now I don’t remember much from season one 😥

It's short enough that it won't take long to refresh your memory.

I liked season 1 so this should be interesting. Kim So Hyun is such a busy girl(ahem young lady), I love it.

It looked like all of Korean Netflix-produced dramas like this are totally ended up with excitement and I'm ready for this next Love Alarm season (I happily enjoyed the first season of Love Alarm).

I really found the main theme interesting but I didn't like the main characters except Jung Ga-ram 's one.

I hope they didn't follow fan's wishes but the devolpment of the characters.

I assume they'll be following the webtoon. At least, I'd be surprised if they don't

Curious to see if they do the same # of eps as S1.

Koreans are the best

This show is just breaking my heart how they doing Sun-oh..... like it wasn’t bad enough she embarrassed and broke his heart in highschool, and even after HE still loved you and then you break his heart AGAIN and icing on the cake you date his Bestfriend....... like this shit really hurt my heart😭💔 but then again it is sun-oh’s karma in a way but damn my man’s can’t even keep a new gf because he can’t ring her alarm still wanting you.... definitely think there should be a season 3 and some justify for there love, definitely think she’s taking the easier option the one that won’t hurt as much if she loses🤷🏾‍♀️