Park Shin-hye journeys through a ruined Seoul in Sisyphus: The Myth

New promos have been released for JTBC’s upcoming fantasy mystery Sisyphus: The Myth, including new stills of Jo Seung-woo(Forest of Secrets 2) and a video teaser featuring Park Shin-hye (Memories of the Alhambra).

The story of Sisyphus: The Myth tells us about beings who have hidden their existence among humans and engineer Jo Seung-woo is on a mission to uncover their true identities. Revered as a genius within the field of engineering, Jo was enrolled into KAIST (the Korean equivalent to MIT in terms of prestige) at the age of 17 and now runs his own research company called Quantum and Time. Despite his successful career though, he is emotionally stuck in the past. And he carries tremendous regret about how his brother suddenly died and how he failed to support his brother when he needed him.

However, Jo Seung-woo’s investigations about the mysterious beings puts him in great danger and this development is somehow alerted to warrior Park Shin-hye as well. Coming from what seems like another world, she travels a far distance and wars challenges along the way in order to find Jo Seung-woo and rescue him.

In the newly released teaser, we get a closer look at Park Shin-hye’s character as she walks through a post-apocalyptic Seoul, in what seems to be an alternate or future world. The city appears to have been destroyed a long time ago and all sorts of plants and fauna have grown through and among the ruins.

Coming across an intact BTS poster, Park takes off her gas mask to appreciate it better and remarks, “Nice! A special item!” In commemoration, she puts on her earphones and turns on BTS’s Spring Day which plays over the rest of the teaser. Mouthing along to the lyrics, Park Shin-hye walks through the debris-filled streets and a fallen sign reveals that this area was once the famous shopping district of Myeongdong in Seoul. As if browsing through shops herself, Park stops to check herself in a compact mirror and she steps up onto a pile of concrete to take in the scenery. The teaser comes to an end as it cuts to Park Shin-hye looking at the camera and she wishes herself a happy birthday.

Directed by PD Jin Hyuk (Legend of the Blue Sea) and written collaboratively by Lee Jae-in and Jeon Chan-ho, JTBC’s Sisyphus: The Myth is currently set to premiere this month on February 17. 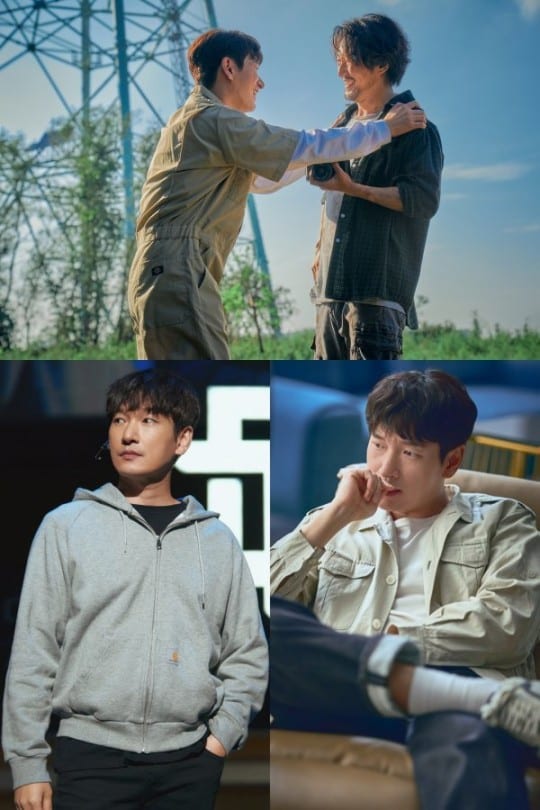 I'm glad you translated because now it sounds like some kind of video game. Did she hear the criticism from that drama I am still a little bitter about and decide she wanted to be active in this one.Hmmmmm. Probably not, but hmmm.

I have to say seeing Jo Seung-woo in a hoodie is a shock to the system- I thought my mans was contractually obligated to only wear suits.

Along those lines we will get to see Lee Joon-hyuk (1984) again out of a suit in his upcoming OCN drama DARK HOLE in which he will be playing a tow truck driver.

Was just thinking about his new drama today!

What I read from article about Han Tae sool is that even though he is a CEO he chose to show his natural self than being an unapproachable CEO. He also like to identify himself as an engineer. I think this says allot about his character. :)

I don't really understand the tone of this teaser...? I think the choice of music + her mouthing along in a meta way + just casually strolling through an overgrown/abandoned city = I'm lost as to how to feel about the mood the show is trying to set

Everything I’ve seen about this drama is so random I have no idea of what it is about or what to expect. I’m just taking a leap of faith here.

Exactly, one moment it handles one plot and the next it seems like another.

It feels random because this one is only a special teaser to present the ost. This one is the real trailer for whoever is curious about the drama: https://www.youtube.com/watch?v=_G4tu5_7Ox8

This is either a MV or cosmetics CF. Why is there PPL in the teaser? Sign of things to come.

Honestly... I am not sure Koreans can handle apocalyptical plots, but Americans can't either😂😂😂😂😂
I am also not sure this could be a good character for the Park girl, but... let's wait and see...
I will follow through your comments, beanies. 😉
Fighting!

i think Koreans (i feel so weird just saying that term but i mean as a whole idk lmao culturally) are better at it than americans (well i'm going to say white americans) tbh but i think their apocalyptic stuff is usually very relevant and like cultural in films at least but it's hard to tackle on TV in the more mainstream. considering it's after sisyphus and camus it's just a shame if the mark can't be met

Well, for sure Koreans will do a best job than white Americans. 😂😂😂😂
Although I should not compare, I know.... 😒

Honestly Park Shin Hye is one of those actresses I like and I feel quite fond of, especially from nostalgic older dramas like Tree of Heaven and You’re Beautiful - but I just hate watching her act lol. Idek what it is.

she's not very good at it lol i like her too tho sorta. i think (or hope) she's gotten better

Her acting is not the best unfortunately. .

I delete my previous commentary because thinking again I feel like that towards Lee Dong Wook. I don't like his acting but he is someone I'm super fond of and I don't why. Lol this is such weird feeling but I guess it happens

i'm the same with go ara too. i hate LDW's actingtho in strangers in hell he's actually good if u like horror or weird shit it's a good show if u havent seen it

I'm indifferent towards Go Ara (I only watched black lol) and I like PSH. But I think it depends what is your cup of tea and what projects you watched.
Yes, Strangers in hell is definitely his best project but I think I need more to change my mind you know. At least he doesn't annoy me so I'm fine lol

In r94 she’s good! Not amazing but since the ensemble and the writing (and it’s one of my fav couples) it’s just enjoyable. It’s what endearaed me towards her LOL. It did wonders.

Feel u for LDW i dont think he’s very good but i do think that if he takes on more balls to the wall notable type characters he can make a more decent impresion (like Life was not a good look or decision it’s a show very cahracter based with actors way way out of his league so...) but lol same

Is she wearing a cat ear headband on her head at the end? Either way, I always try to check out whatever Park Shin Hye is starring in.

oooooooh.... dystopian drama of postenvironmental disaster or what? yes.

You know the series has a hefty budget when they can throw a BTS hit song into the promo.

Let's hope that's not where the budget ended.