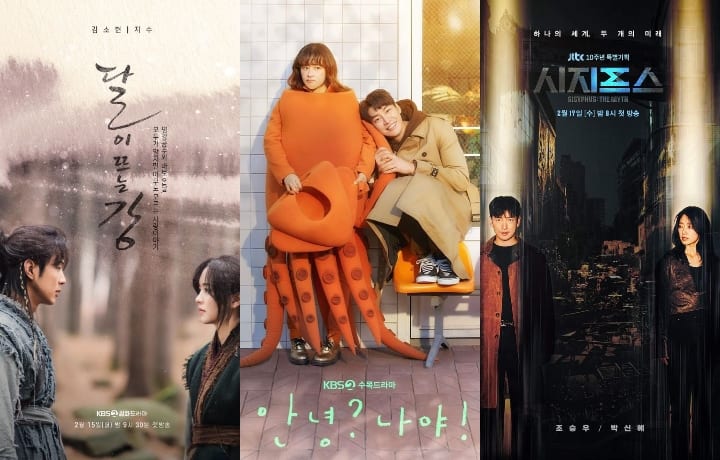 As they say in Jurassic Park parlance: hold onto your butts! With premieres and schedules shifting pretty frequently these days, February is set to gift us with more premieres than I can count. Here’s what we’re looking at in the first half of next week (yes, there’s more to come after that, so stay tuned!).

River Where the Moon Rises 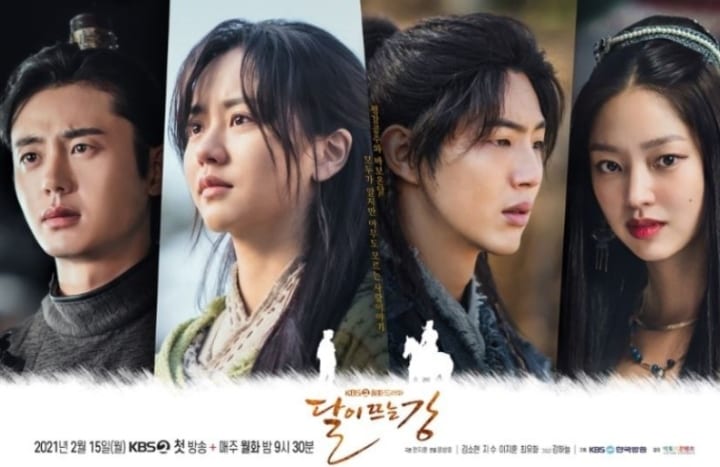 Reasons to watch: The 2021 sageuk invasion continues! Our latest drama, though, looks a little more sweeping and serious to the recent sageuks we’ve had. River Where the Moon Rises tells the story of a Goguryeo warrior princess (Kim So-hyun) and the man she meets (Ji-soo). The drama is directed by the PD from the well-received Wind and Cloud and Rain, and promises a moving tale adapted from folklore. One of the most exciting things about this drama, though, is the re-pairing of Kim So-hyun and Ji-soo after their short drama Page Turner in 2016. In short, I’m hopeful for something epic here. I want tears, clifftops, hair blowing in the wind, tragic demises — you get the idea. 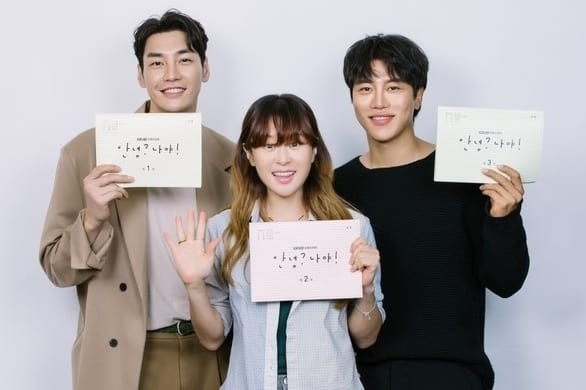 Reasons to watch: Finally, a rom-com in our midst! Though this drama is a little low on buzz (compared to the big-name, big-budget productions coming up), I’m actually really excited to see what this becomes. Choi Kang-hee plays our heroine, who’s visited by her teenage self, and Kim Young-gwang (most recently great in Secret Life of My Secretary) plays the chaebol hero she encounters. The concept is cute, and I’d love to see something almost Dickensian going on here (the ghost of Christmas past, anyone?). But honestly, what piqued my interest the most was the squid costume in the show’s poster. 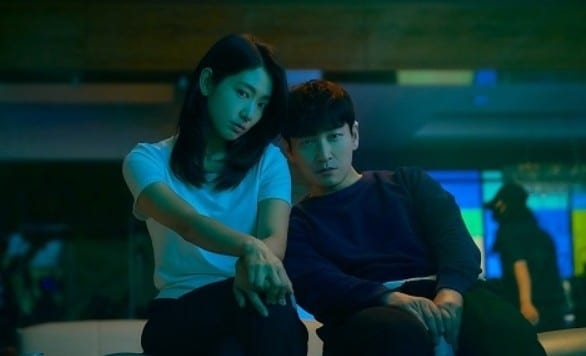 Reasons to watch: Sisyphus, whatever should we make of you? Entirely pre-produced, and with a big budget and a wild fantasy-action story, you are surely one of those high risk/high reward sorts of dramas. I like the cast (Jo Seung-woo, Park Shin-hye), I like the PD (Legend of the Blue Sea, City Hunter), and I really like the premise (a businessman pursuing a dangerous truth, and the warrior that protects him). But can this drama be as great as it wants to be? I sure hope so! I’m ready to dive headlong into something epic and intense, with a story logic that swallows you whole.

Tags: Hello? It's Me!, Premiere Watch, River Where the Moon Rises, Sisyphus

I'm so hyped for Sisyphus and River Where the Moon Rises. So many good shows coming out this month (mostly this week), and I hope they're all as intriguing as they sound!

Yes, Vincenzo and Beyond Evil look good as well although I might put Beyond Evil on the back burner because there's only so much time I have to watch all these dramas :(

I might be busy this week! (Watching dramas that is!)

I'm so excited for Sisyphus and Moon, but you forgot Vincenzo on Saturday. I will try all 4, but im most excited for those 3.

For those of you who haven't read the folktale.
"The Princess and the Idiot: Behind every good man is a great woman."
https://www.korea.net/NewsFocus/Culture/view?articleId=122048

Lee Ji-hoon and sageuks 👍👍 from me.

thanks for the link!

Aren't Vincenzo and Beyond Evil also premier this week?

and Times as well? :D

I'm so done with so many premier this week... :D

Here’s what we’re looking at in the first half of next week (yes, there’s more to come after that, so stay tuned!).

I'm mostly looking forward to River, but I just saw that Hello will have the kid sister from Alhambra :)

You know, the non-crying one.

You mean the only sister from MOA? ;)

Oh boy, this is gonna be a busy week (no complaints though😉)

I think I need to check my coffee supply because I don't know how I'm going to handle all of these premieres!

If I wasn't already excited for SISYPHUS, the picture of Jo Seung-woo and Park Shin-hye alone is enough for me to watch it

River Where the Moon Rises is what I am hyped up to watch. I love the leads and sageuk. I also know about Ondal and the Princess so looking forward to watching this version. 😁

Well, I'm going to be really busy this week.
I'm going with Moon, Sisyphus and Vincenzo for sure.
And I want to try Beyond Evil, but can anyone tell me where is this available? I have to go illegal on the Netflix shows if I want to live watch, something I don't really like, but I can't wait for any of those.

VIU will have it.

Not available on my zone 🤦🏼‍♀️

Not on mine as well but VPN help. If you don't have VPN subscription, you can use browser with built in VPN like Opera and choose their Asian server. I've tested before and it does the trick.

I will definitely have to check, because all this geographic restrictions are getting on my nerves.

It's a million dollar question.
Will Ji Soo gets the girl this time?

Excitement for new dramas 🤩🤩🤩
I am in for River, Sisyphus and Penthouse 2. Will give rest of the dramas a try too if time allows. The days are definitely gonna get busier

River, Sisyphus, Vincenzo - wow, I'm going to have no life. I've never attempted this level of live watching, but I simply have no other option.

Right? I am looking at my current watch list and thinking about dropping a few so I can start these.

Exactly! I've been cranking through some bingers to be done so that I can start these, and I think I'm just going to have to pick them up again later.

I'm also live watching L.U.C.A.
I think in my craziest times I watched 6 live dramas.
I wasn't bored at all, hahahahahahaha.

6?! When did you sleep?? I'm impressed! Did you ever mix up the storylines haha??

i am so spoiled! i had to wait a week for the new dramas to come and i was dying without anything to watch. i even re-watched 3 saeguks while waitng. spoiled i'd say! we used to have to wait a long time for subs to come out and now they are so fast! a BIG thanks to all who tirelessly work on and get them out for us. i have never really connected to Ji Soo but i love Kim So-hyun so i think this will be great especially SAEGUK! they all sound so good so it will be a busy week getting a feel for all of them to see which ones stick in my watch it now list.

I've about watched all of the Netflix shows I've been meaning to watch and am bored. None of these excite me, but I'm so anxious for new dramas, I'll watch anything.

lol noooo I'm gonna go straight from drama slump to watching four dramas a week 😂
Will I be able to cope with this change?

I am quite excited for Sisyphus!!

I am not a sageuk person but this drama is making me curious.

I will probably start watching all new dramas and drop few along the way. At the end I think I will stick with River and most probably Sisyphus.

Doesn't "Times" also premiere this week? You missed that one in your list here.

Anyone know where it can be streamed in the U.S.?

Also, had to go the long way around to see that Hello, It's Me is called Hello, me on Netflix...

Unfortunately right now TIMES joins BEYOND EVIL and MOUSE not being streamed on a legal site in the US.
That situation could possibly change with a late pick up by Viki or ODK. I would think we would know by now if any of those dramas will be on Netflix.
Could any of them wind up on iQIYI? Who knows?
I am also concerned that JOSEON EXORCIST might not be available on a legal site in the US.

Gosh, so many dramas tempting me for live watch. Something that I usually try to avoid since cliffhangers drive me banana.

The good news is that episode one for RIVER WHERE THE MOON RISES is fully subbed on Viki (US). Well done. There is a ratings challenge from actor Lee Ji-hoon:

“If we surpass 20 percent, then we’ll switch clothes with our co-stars, like me wearing Hae Mo Yong’s clothes and Ji Soo wearing Pyeonggang’s clothes, and we’ll do a dance and upload it.”

That is from this Soompi article:
https://www.soompi.com/article/1454523wpp/ji-soo-kim-so-hyun-and-more-talk-about-their-river-where-the-moon-rises-characters-share-ratings-promise-and-more

The bad news (so far) is that it looks to me that JTBC’s BEYOND EVIL and tvN’s MOUSE will not be available on a legal streaming site in the US.

Ohm so little time and so many dramas, I'll stay with Sisyphus and Vincenzo, I wonder who will be victorious in terms of ratings in this sea of premieres.

This weeks ratings will surely be war. Especially the weekend ratings.

@db-staff it looks like you're missing Sisyphus in the "Prime-Time Shows This Week" list in the sidebar! :)

Hmmm. I just finished the first two episodes of Hello and it's nothing like 18 Again.

Gosh, I should have caught up on some old dramas last week when I had a bit of a break. Now there's so many new ones I want to see! Lots of action and thrillers. O:

I haven't juggled multiple live dramas in a while. At most was like 3? 4? We'll see if my attention holds. XD

So many dramas are coming up. I guess Covid messed up drama schedules a lot.
I love Eum Moon-seok but I'll pass Hello It's me since trauma after watching Choi Kang-hee in Good Casting.
I'm watching LUCA and Love (ft. Marriage & Divorce) already,
And
River Where the Moon Rises, Sisyphus, Beyond Evil, Vincenzo and Times will be added. Agh I will be sooo busy!
But I'm sure some of them won't go beyond my Ep.3 wall, Ep.5 wall, or Ep. 8 wall... and will be dropped.
I have a feeling of Beyond Evil and Vincenzo will make it to the final episode....

Soon I will have gone from 0 airing dramas to 5 (maybe 6???), in the space of 2 weeks. Plus two rewatches ongoing. Welp. I guess I can't complain about having nothing to watch now.

Guess who watched Kim Young Kwang and is a fan now? My mom—guess I know where I get my tastes from. She’ll be watching Hello It’s Me, with me!

Ahahahaha!!!!! Women of taste you both are lol. Although I don't think I'm picking up Hello, It's Me, even for KYK, so let me know how it goes.

I enjoy these interregnums. Sometimes I will catch up on a well regarded drama that I have missed. After RUN ON concluded I began my current break in drama cycles so I watched a number of older KBS Drama Specials and 5 Korean/Chinese movies available on Viki and the Korean caper movie THE THIEVES (2012) on ODK. I have not yet watched SPACE SWEEPERS or the Chinese fantasy THE YIN-YANG MASTER: DREAM OF ETERNITY both available on Netflix (US).
now that RIVER WHERE THE MOON RISES has begun it is back to work.

Netflix notif on. Let's see how far my attention span can hold.

Verdict on the premiers? I'm mostly asking about Hello? and Sisyphus because sageuks lose me 99% of the time. Beanies, tell me which of these two will entertain me and also make the voices in my head shut up.

I watched Hello and the beginning is trippy as heck but it has heart. I'm staying for next week's episodes.