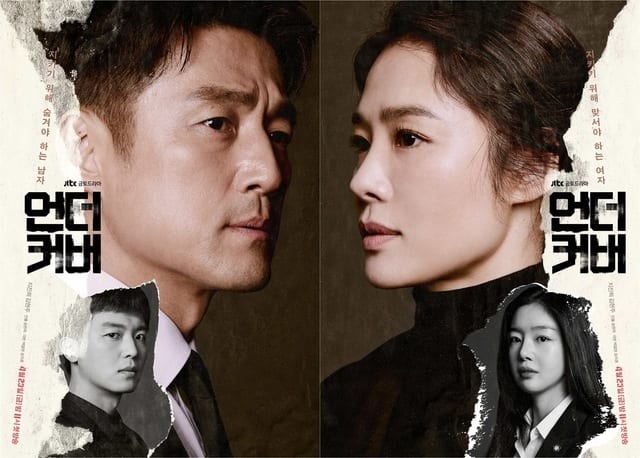 Kim Hyun-joo (Watcher) and Ji Jin-hee (Designated Survivor: 60 Days) show their characters’ complicated relationship in the teaser for upcoming drama Undercover. Based on a popular BBC drama by the same name, Undercover is a legal-action thriller centered around a couple’s relationship.

Ji Jin-hee plays an NSA agent who was recruited into the agency while he was in the police academy. Almost immediately, he goes undercover at which point he meets his wife, played by Kim Hyun-joo. He falls in love while undercover, and they start to build a life together. Years later when she, a successful human rights lawyer, becomes a leading candidate for Chief of the Civil Servant Corruption Investigations Bureau, some suspicious information about her husband comes to light and she begins to doubt everything.

Recently a bunch of promos were released, gearing up for the premiere date next month. Stills show Ji Jin-hee preparing breakfast for his busy wife, running a bike shop with his son played by Yoo Sun-ho (My Strange Hero), and turning around to see if he’s being followed.

The video teaser begins with Kim Hyun-joo pointing her gun toward a crestfallen Ji Jin-hee. She internally questions him: “Who are you?” A flashback shows their first meeting when they were younger. Han Sun-hwa asks Yeon Woo-jin for his name. Ji Jin-hee smiles brightly remembering their beachside frolicking, but their current married life doesn’t seem to be going smoothly. Copy appears saying: “To protect everything… he had to hide.” She sleeps while he steps out of their bedroom, and the next scene shows her watching from a car while he embraces another woman.

After a car chase involving Ji Jin-hee, Kim Hyun-joo is shown in the spotlight at what looks to be a major political conference. In narration, Ji Jin-hee desperately asks Kim Hyun-joo: “Yeon-joo [Kim Hyun-joo’s character], believe me. Please.” A midnight seaport encounter ends in a shooting and a possible drowning. We return to the first scene with Kim Hyun-joo facing Ji Jin-hee, and she screams: “You aren’t Han Jung-hyun [Ji Jin-hee’s character]. Who are you?!” 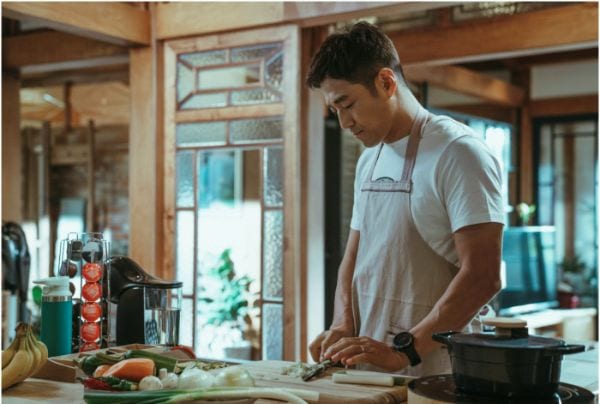 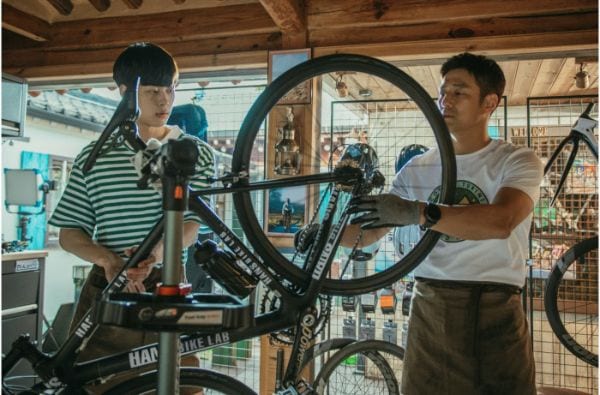 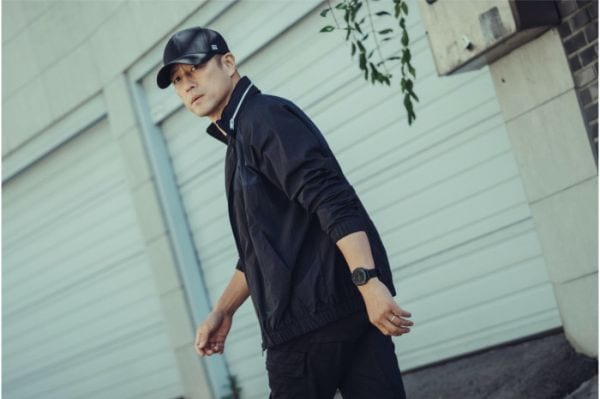 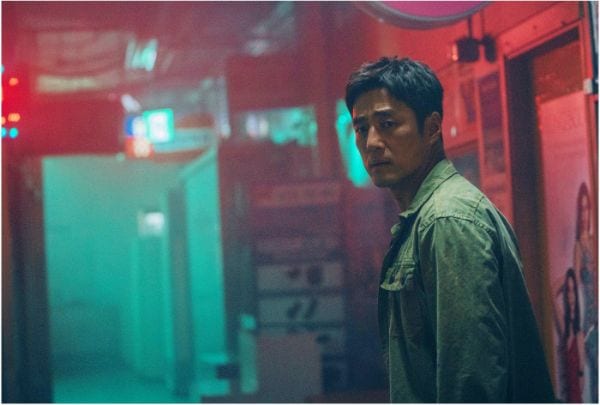 Yeon woo-jin..Yes!
Anyways, I'm here to complain on the lack of updates on Seo In-guk. Like c'mon! I'm parched!!! Can't believe there's no more Weecap on "River where moon rises" either! 😖

These two had the amazing chemistry in I Have Lover. Can’t wait to see this!

Omo, I'm vibrating with excitement! These two are so f* great together. I loved them in I Have a Lover! Eleven years before that, their baby selves starred in Ms. Kim's Million Dollar Quest, a quirky fake-marrige/workplace rom-com. She plays an interior architect who's dumped on her wedding day. He plays the wedding photographer who whisks her away to save her from embarrassment. Fate brings them together when she needs a fake husband and he needs a house. Their lives really get enmeshed when they start a series of businesses together. They stick together through the highs and lows—at one point, they're living in a closet, sleeping inches apart—and finally triumph, professionally and as a family.

Count me on this one!

Kim Hyun-joo was so good in Watcher! I'm excited to watch her in a new drama. Ji Jin-Hee is playing in a new remake, after Designated Survivor: 60 Days. I don't know the original one, so I don't have expectations.

When Yeon Woo-Jin will come back as a lead and not as zombie or younger version?

I am trying to be optimistically excited about this one, without the prospect of Ji Jin Hee and a secret-plagued marriage flaring up PTSD from the last half hour of Misty...

Loved her last drama, did not like his. So I am hopeful this is good.

You didn’t like Designated Survivor? It’s a great ensemble piece and I just finished a rewatch - I’d rate this as one of JJH’s best works.

If you are talking about Misty, I totally understand though.

Count me in - won’t miss a drama with both JJH and KHJ.

Nice to see Kim Hyun-joo and Ji Jin-hee together in what looks like a serious drama. I've watched the original Undercover, which has one very major element that's highly unlikely to be transferred to this version: the two main characters are black people who work/ed in government institutions dominated by white people. I remember the Adrian Lester character, a cop, constantly picked by his bosses to go undercover as a drug dealer because of his race.

That said, IMO Ji Jin-hee and Adrian Lester are quite similar in one way: they have a sort of clean-cut, gentlemanly onscreen image that they occasionally subvert to interesting ends . Both have even played villainous vampire bosses before: JJH in Blood and AL in the pilot of Being Human.

“ That said, IMO Ji Jin-hee and Adrian Lester are quite similar in one way: they have a sort of clean-cut, gentlemanly onscreen image that they occasionally subvert to interesting ends .”

Waaa This brings me back to i Have A Lover, the joy of watching Makjang drama, all the yelling and pulling my own hair. 😂 Still one of my favorite 50 something episodes drama.
Bring it on JJH and KHJ! I watch this

I've been waiting for this show as soon as they announced the casting. I Have A Lover was my first makjang and their chemistry had me biting my pillow through the whole thing. Just writing the title immediately recalls the music—there were only two songs. "Oh, here we go! Here come the feeeeeeelings!"

It's the third time they're in the lead together, isn't it? I was a kid when they were first together in a drama. Can't believe they will be paired again. Nice surprise to see.

Yup—2004's Ms. Kim's Million Dollar Quest. It is my fervent wish that they make dramas together every 5-10 years.

my love for JJH goes way back and i think this match up will make a great drama! they are both great actors and can draw you in so easy.

OMG This just made me remember that I never finished I Have A Lover!! I was about midway through the drama, anyone know if it is worth finishing?

Anyway excited for this, they have great chemistry and are both fun to watch on screen.

I Have A Lover has different patches. Surely a makjang drama but there is deliciously sweetness especially in the middle when JJH met JHJ#2. KHJ plays virtually three different roles with distinction. I followed it through despite long makjang hardly my thing.

There is always FF button for parts you don’t like.

“ Surely a makjang drama but there is deliciously sweetness especially in the middle when JJH met JHJ#2. ”

True, and nicely put. The sound track has two lovely songs - Time by Ryu, and Us Two by Lee Eun Mi.

I will confess that I sped through the first 10 episodes and only fell in love at the beginning of the delicious arc. Then I savored most of the remaining episodes. The main romance was enthralling.

My least favorite character was the doctor, played by Lee Jae Yoon. His acting wasn't the strongest and I honestly felt he was more interested in the little girl than the mother so that "romance" was far less interesting.

My favorite antagonist was the sister-in-law. My bitchy queen. Her slimy husband was excellent too—with a classic Backpfeifengesicht (a face that wants punching)!

Any idea if this will be streaming on Netflix or another platform?