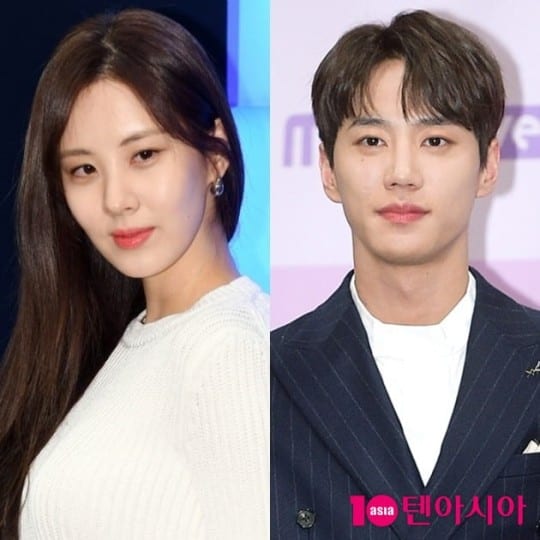 A new rom-com movie has been announced for Netflix, called Moral Sense (working title) and casting has been confirmed for Seohyun (Private Lives) and U-KISS’s Jun (Please Don’t Date Him).

This is her first movie leading role, and Seohyun takes on the role of Jung Ji-woo. To most people, she appears to be emotionless and apathetic. But once you get to know her, you realize that she has a warm and cares deeply for others. By chance, she discovers her something about her co-worker’s predilections that he’s kept secret up till now. And from that point onwards, their relationship begins to develop in a curious way.

This co-worker, naturally, is Jun who plays the character Jung Ji-hoo. Although popular at work, he has a weird interest which he keeps hidden from others. His worst fears are realized when Seohyun discovers his peculiar preference. As to how Seohyun managed to learn his deepest secret, it might be because of their characters’ similar sounding names. An identity mix-up that leads to shenanigans? Sign me up!

Produced by Netflix, the movie will be directed by Park Hyun-jin (Like for Likes, Lovers of Six Years) and a release date has not yet been announced.

It's portrayed in a PG-13 way in the webtoon that focuses more on learning individual interests and boundaries, and willingness to learn about and experiment with what the other person is comfortable with and interested in (e.g. the female lead literally has to do an Internet search on what to do as a dom, because she lacks knowledge; one of her "punishments" for the male lead is flicking him in the forehead, which he finds adorable; etc.).

As a fifty-ish suburbanite for whom Bertolucci films count as "edgy", I will not pretend to be anywhere close to broadminded enough to enjoy this kind of film, regardless of whether it is toned down or not.

Huh. I thought you were joking about the subject matter.

Ooh this is refreshing! Thanks for the info. Jun's casting had me hooked already but now I'm doubly interested.

As much as I love Girls’ Generation, idk how I feel about Seohyun’s acting. I always feel like she’s lacking in some areas as an actress. Fingers crossed, I’ll be proven wrong this time.

I've only seen her in Private Lives, and I thought she did as best as she could in light of the writing and the story just being all over the whole place. So that may have obscured some clumsiness in her craft, but there were moments that I thought she did play quite well. Perhaps it's just a bit uneven and more experience (and a better script) will help.

I haven’t seen Private Lives as I didn’t hear many good things about it. However, judging by what you’re saying, Seohyun seems to have improved her acting and that’s great news for this movie and any upcoming projects she has.

Private Lives wasn't a great show. I FF most of it. It had a great premise and a slick look (the disguises were great), but it tried to be so many things that it ended up being none of them. It was a shame, as the OTP had good chemistry and there were some solid performers...just not much for them to work with.

I have a personal vendetta against the idiotic mess Private Lives turned out to be. They really wasted a good premise and stellar fashion and a good lead couple for this shit. I’ll never forgive never forget

I thought she was really good in Hello Dracula. I had not seen her anything before that but she was memorable to the point that I was saying that she was the SNSD member that should have gotten the acting push back in the day. But that was only a 2-episode special. Private Lives was a confusing mess that I had to drop but yeah, I think that's more the writer's fault than anything else lol.

Netflix kdramas only goes to two extremes, either "OMG MUST WATCH!!" or "meh, sounds like someone is trying to make some basic drama"

I feel that same way. Its just something about them. Like the production quality is good, but there is something that is lacking. Like you said some are really good and some are like blah. Honestly none of them excite me like the ones from dramafever. I miss dramafever so much.