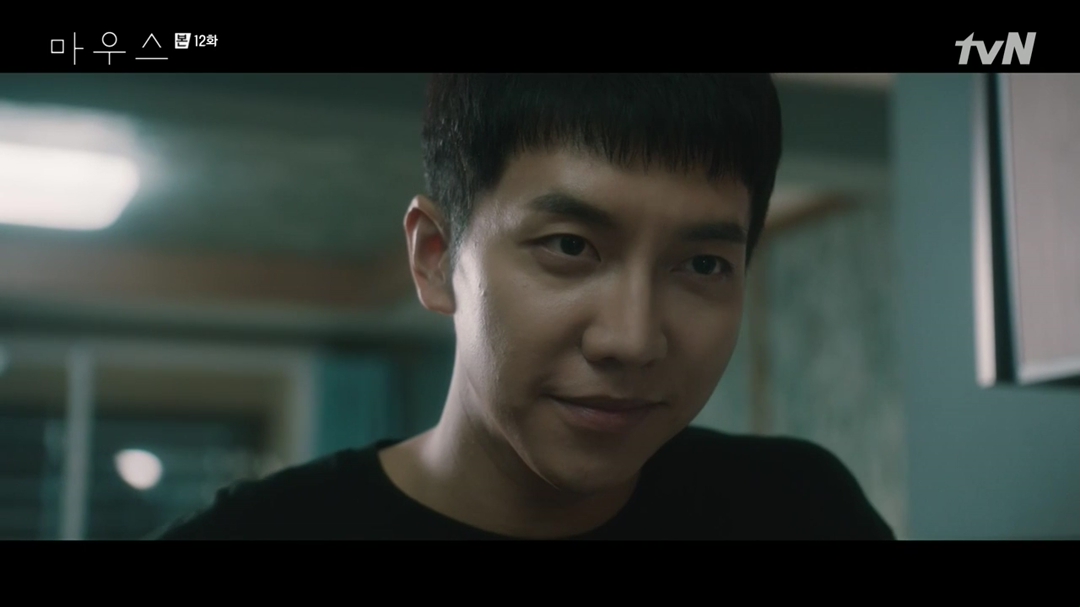 With one despicable psychopath gone, another appears… which might actually prove to be a good thing for our murder-hungry cop. Finally freed from the shackles of her past, our feisty and strong boxing enthusiast has the opportunity to search for her dreams and aspirations.

Please note: There will be no coverage on Mouse from episode 14 onwards. We’ll see you on our Drama Hangout post instead! 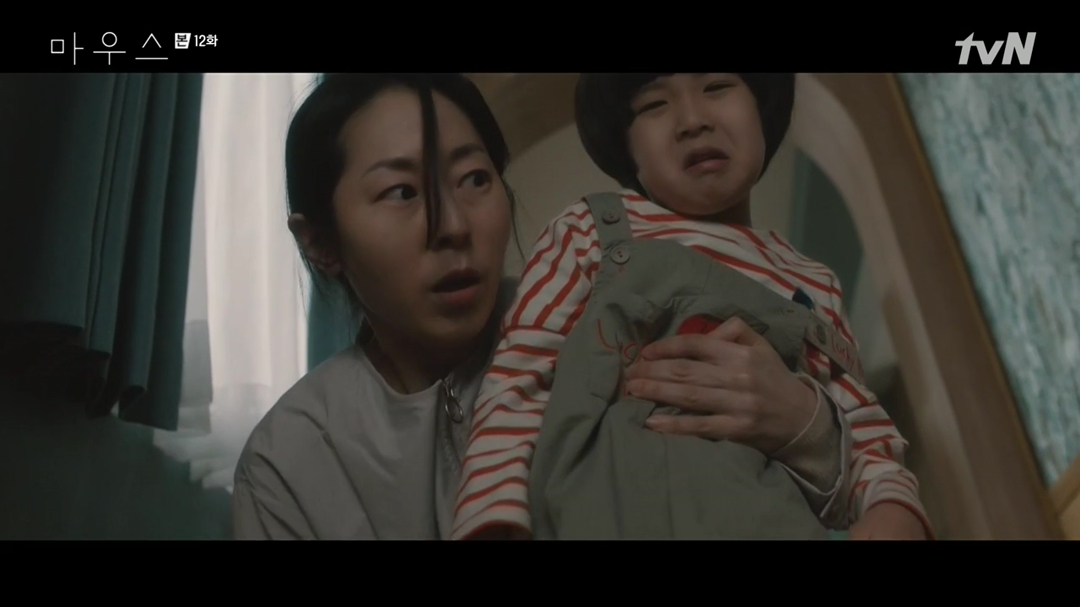 Taking Kang Deok-soo out really did wonders for Ba-reum, who looked absolutely radiant the morning after as if everything wrong with his life was magically fixed. Thankfully, Hoon-seok is still alive thanks to Butterfly the cat who scratched Ba-reum before he could strike his cousin with the wrench.

Butterfly didn’t make it through the night because of this, and Ba-reum really needs to find the remaining kitten a new home before he harms it, too. Curiously, Ba-reum’s aunt can’t even look him in the eye when she picks Hoon-seok up and seems absolutely terrified, although we don’t learn why yet. 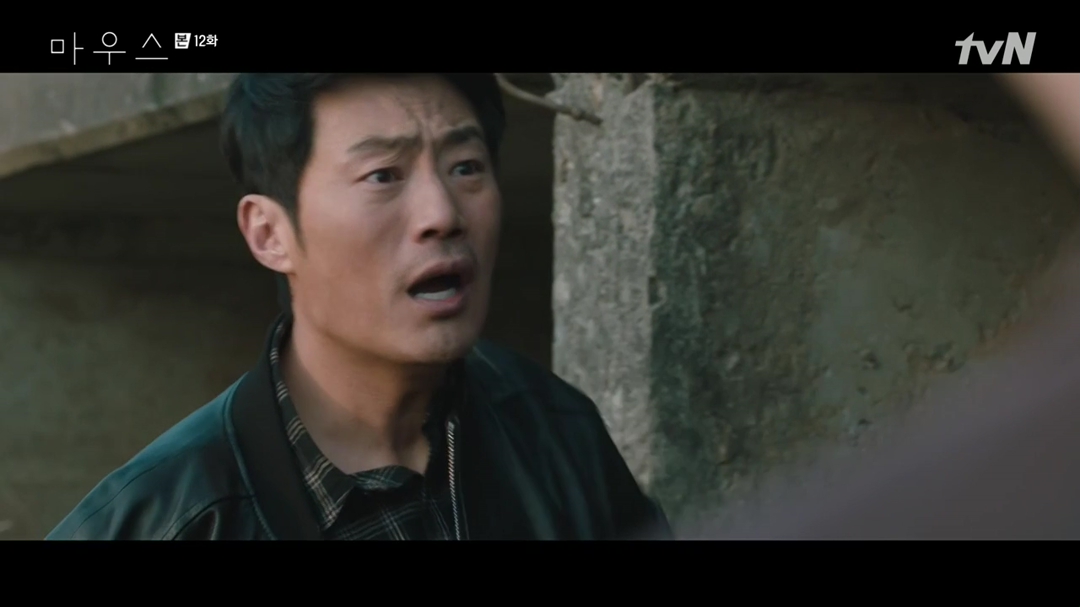 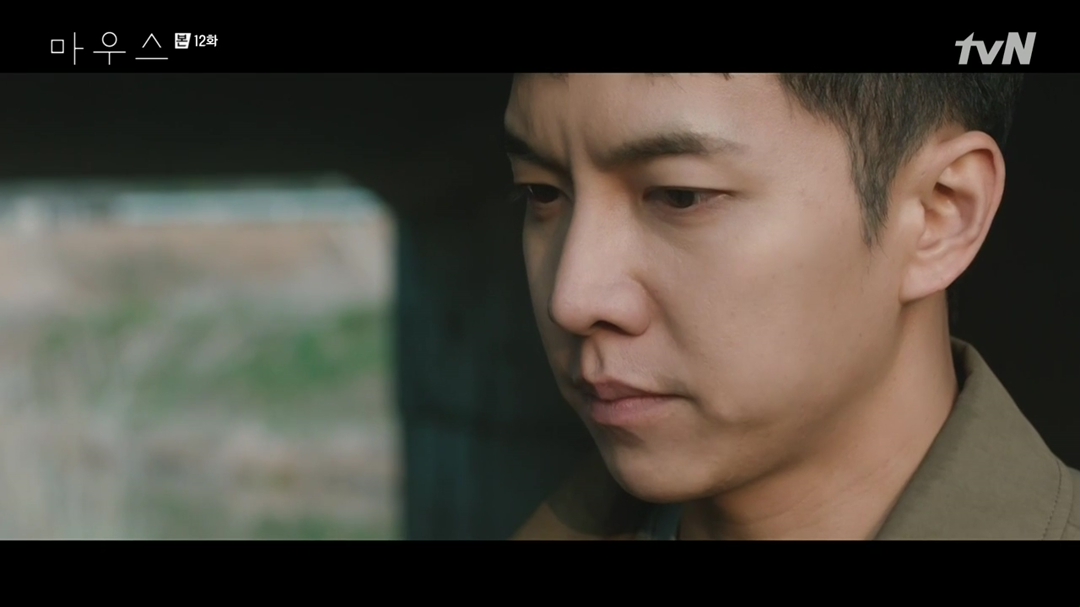 In a disturbing reveal, we find out that twelve years ago, Jae-hoon came across Bong-yi after Deok-soo was finished with her. Annoyed that this discovery would cut into his gaming time, Jae-hoon ignored her desperate pleas to be saved. Deok-soo’s corpse was disposed of in a very similar fashion, under a bridge with a blanket covering his entire battered body.

Throughout the episode, we piece together the events of that night. Ba-reum went to look for Bong-yi and decided to protect Yoo-na by locking her in a cabinet under the bridge, not knowing that she saw the scratch on his hand (which she later identified him with).

He then set up a trap for Deok-soo, gave the sexual offender every wound that was inflicted onto Bong-yi back then (inspired by the “eye for an eye” passage from the bible found in Soo-ho’s evidence box), and castrated him as punishment. This makes Bong-yi a prime suspect in Detective Kang’s eyes, but Moo-chi points out that this has “psychopath” written all over it. 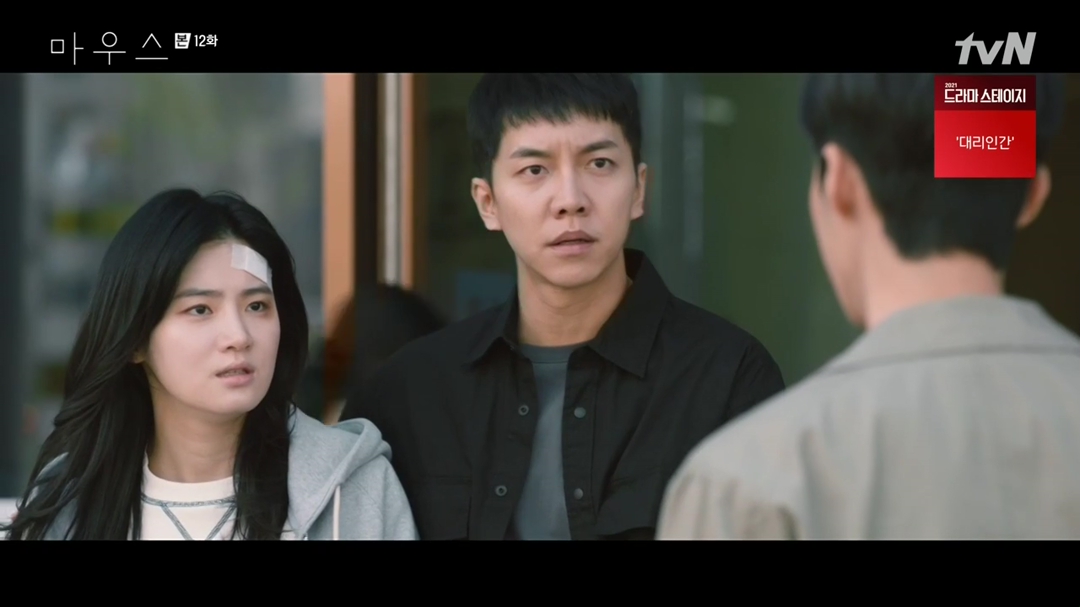 Bong-yi barely defends herself when put in the hot seat, and it’s because she thinks that Moo-chi killed Deok-soo for her (she found the 1,000 won bill at the crime scene). It’s kind of sweet that they’d both protect each other like this, because Moo-chi was prepared to hide any evidence that would incriminate Bong-yi if she really were responsible.

Moo-chi makes Ba-reum increasingly nervous with his scarily accurate explanations regarding the killer’s thought process. At one point, he has to throw suspicion back onto Bong-yi after she’d been deemed innocent just to prevent her from talking to Yoo-na, who recognized that Ba-reum was the killer. He was ready to silence the child, but she was grateful for what he did. 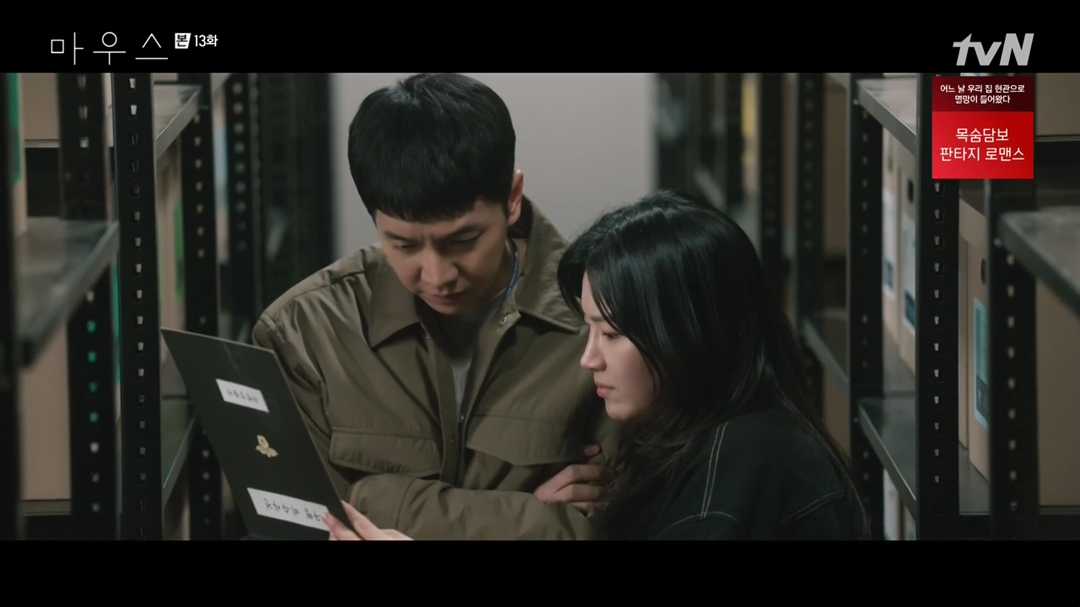 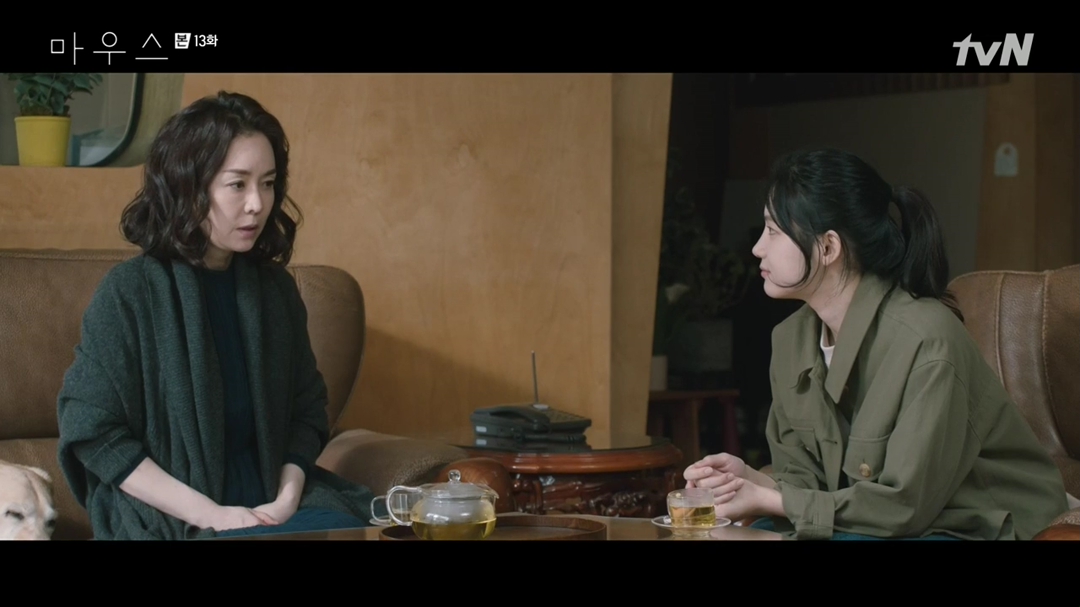 By the end of episode 12, it looked like Moo-chi figured out that Ba-reum was the killer and confronted him about it, but it was a fake out of course. Instead, the murder weapon (planted by Ba-reum) was found downstream near the crime scene and on it was the DNA of Lee Jae-shik, who’s been in jail for the past five years.

Two old cases are brought to light: an unsolved attack on Ji-eun in 1995, and the infamous Suseong Serial Murders which took the lives of ten women between 1997-1999. A man named Kim Bong-cheol was tortured by police and forced to give a false confession as the Suseong serial killer, and Bong-yi (who was hired by Hong-joo to become a writer on her team) has a strong feeling that he’s innocent.

Dong-goo and Ba-reum assist Bong-yi with her goal of convincing the Sherlock Hong-joo team to cover Bong-cheol’s story. She wanted his estranged daughter to know that her father’s not a killer. Bong-yi gathers a statement from Ji-eun because her case had similarities to the Suseong murders, like the fact that her kidnapper ate crescent-shaped apple slices. 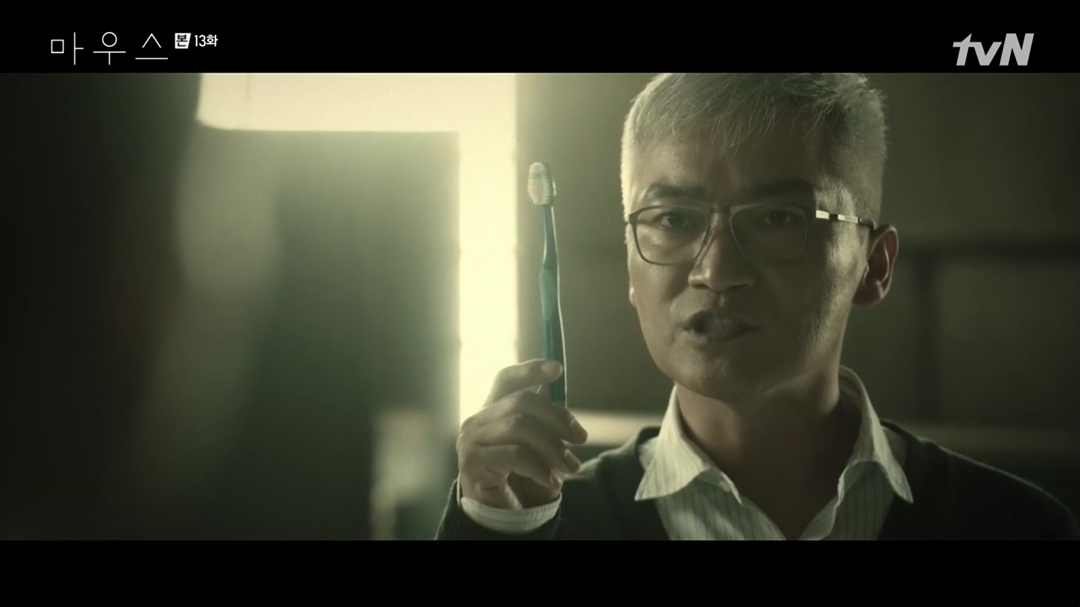 To get people talking about the Suseong murders again, Ba-reum leaks to the press that presidential candidate Shin Sung-min’s future daughter-in-law (a.k.a. Shin Sang’s fiancée) is Kim Bong-cheol’s daughter. The buzz surrounding this case gets them the green light to air an episode focused on Bong-cheol’s innocence.

It turns out that Daniel found two toothbrushes with the psychopath gene from the batch that Ba-reum provided. One was Deok-soo’s, and the other was evidence that was accidentally picked up, belonging to Lee Jae-shik. Things happen fairly quickly from there, but Ba-reum realized that he was the Suseong serial killer and planted his DNA on Deok-soo’s murder weapon to guide Moo-chi towards looking into him.

The episode closes out with Moo-chi catching Ba-reum in the act of killing Lee Jae-shik the night that he’s released from prison. I hope that it’s not another fake out because I’m ready for Moo-chi to learn about Ba-reum’s darker side, especially now that Bong-yi also has evidence that Ba-reum was there when Deok-soo was killed. 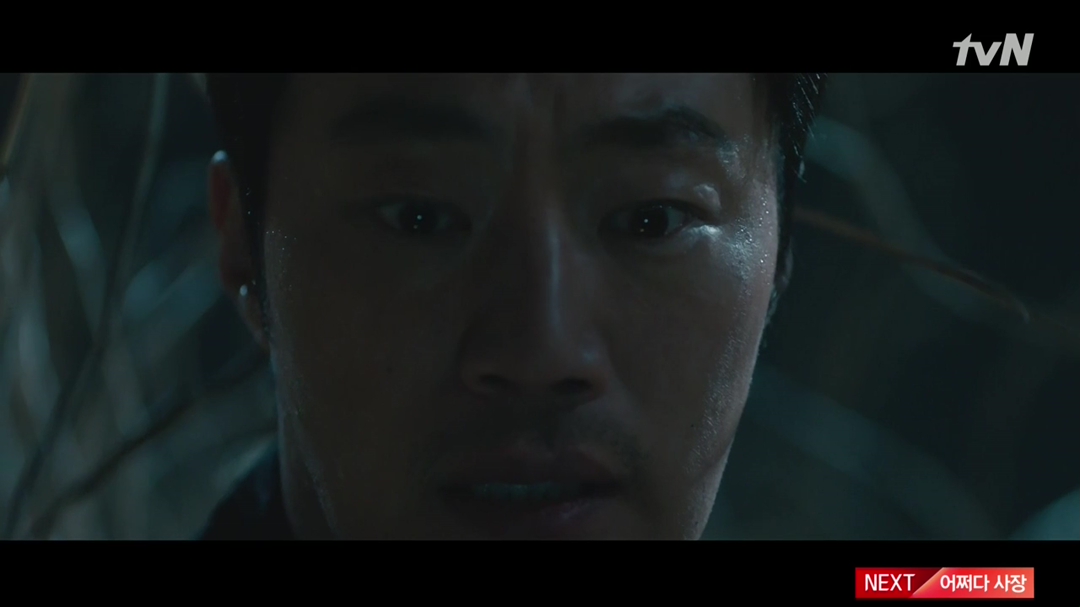 Thanks for the recap! I’m sad there won’t be more but also really appreciate the opportunity to comment without accidentally spoiling so 🙂

I feel like for a policeman/potentially having part of a genius brain Ba Reum doesn’t ask a lot of questions when a man who is allegedly dead shows up and starts telling him to kill people.

I spent a lot of time in these two episodes telling Bong Yi/Moo Chi/various children to not go places alone with Ba Reum, especially in the dark.

I'm getting especially worried for Moo-chi, especially since he was able piece together how Bareum lured, tortured, and killed the pedophile and the whole psychology of it all and even down to likely age range - strong man in his 20s-30s.

Thanks for the recap, even if it is quite short. The main reason I am still watching are the three actors Lee Hee-Jun, Park Hyu-Jun and Lee Seung-Gi. I really enjoy seeing LSG taking on a very dark character. The script is sadly not getting any better, I can hardly keep up with the number of psychopaths. The twist and turns and false leads are confusing and I would not want to recap all the violence either.

It was satisfying to have Ba-reum castrate Kang Deok-soo. Not something that often happens on tv!

I thought this was an unintentionally funny pair of episodes. Quite a few people at or thought to be at the scene of the Kang Deok-soo murder. After Bareum leaves him for dead, both Bong-yi and Hong-joo heard Deok-soo's cries for help and were like "on thanks". Ba-reum could barely keep a poker face and politician lady keeps throwing suspicious looks at him. Bareum went doing some verbal backstabbing - tattling on Bong-yi's clothes change to throw suspicion on her and then letting it slip that Shin Sang's fiance is an infamous convict's daughter.

I was surprised that Shin Sang's dad knew and was so reasonable and human about it.

I thought it was interesting that the 7 sins murders have them murder putting an object of a previous victim onto the new victim and here, Bareum is sort of doing the reverse - planting a hint on the current victim as to his next victim.

Can I ask why you won't be recapping the drama anymore? And where can I find the Drama Hangout you mentioned?

I also want to know where the drama hangout is, LOL.

@dramaaddict @jennee If you guys haven't gotten a chance to check it out yet, here's the Drama Hangout link!

If I am slightly interested in recaping the show ( this and sometimes others, as they come... :P is there a way?) I have been following this drama recap page for years and sometimes I felt I had more to say than just a mere comment. I am quite fluent in english (C1) to do recap and completely in love with korean dramas to find bits of time for it.

does anyone know why there are no more recaps of Mouse? Did something happen?