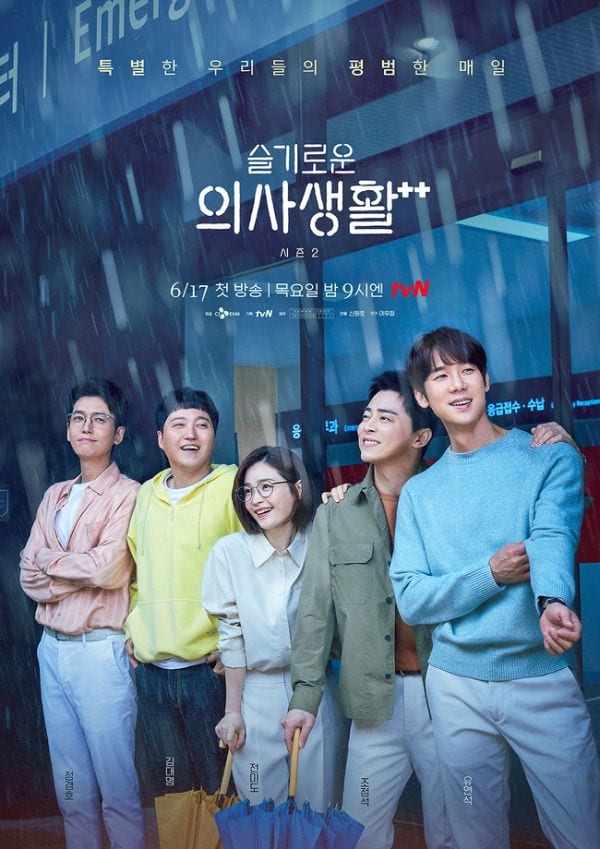 Hospital Playlist is almost back for its second season! After all those cliffhangers, I can’t wait to finally learn what’s happened to the gang. Recently, the poster above was released showing the five doctors after work, waiting for the rain to stop; the caption says: “The ordinary days of our special lives.”

For those of you who haven’t watched Hospital Playlist yet, I highly recommend a binge marathon between now and when the second season starts airing in mid-June. It’s a warm, medical slice-of-life drama centered around the hospital where miracles of life and death occur daily. It follows a close-knit group of five friends that met in med school nearly two decades ago, and are now all specialists working at the same hospital. 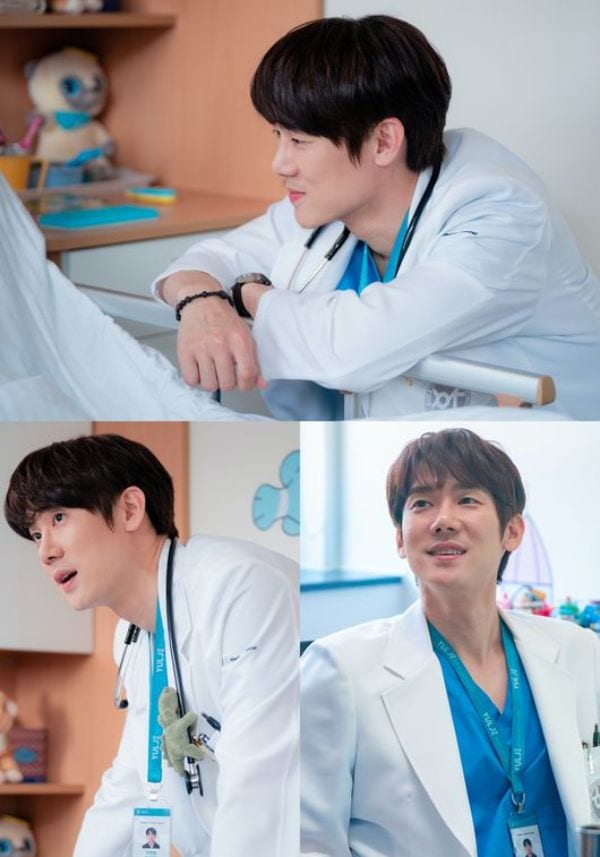 Jeon Mi-do (Mother, Metamorphosis) plays a tone-deaf neurosurgeon who is good at almost everything except singing. Last but not least, there’s Jo Jung-seok (Nokdu Flower, Land of Happiness) who plays a general surgeon that is a popular, cheerful single dad of the cutest kid in the universe, played by Kim Joon.

Still cuts of Jo Jung-seok and Yoo Yeon-seok were also released. Regarding season 2, Yoo Yeon-seok said: “Normally when a drama starts filming, I go through a period of apprehension and worry, but coming to season 2 [of Hospital Playlist] felt like going back to school and meeting friends after a long vacation… Although it was our first shoot in a while, it felt so natural and comfortable, as if we had also met yesterday.” 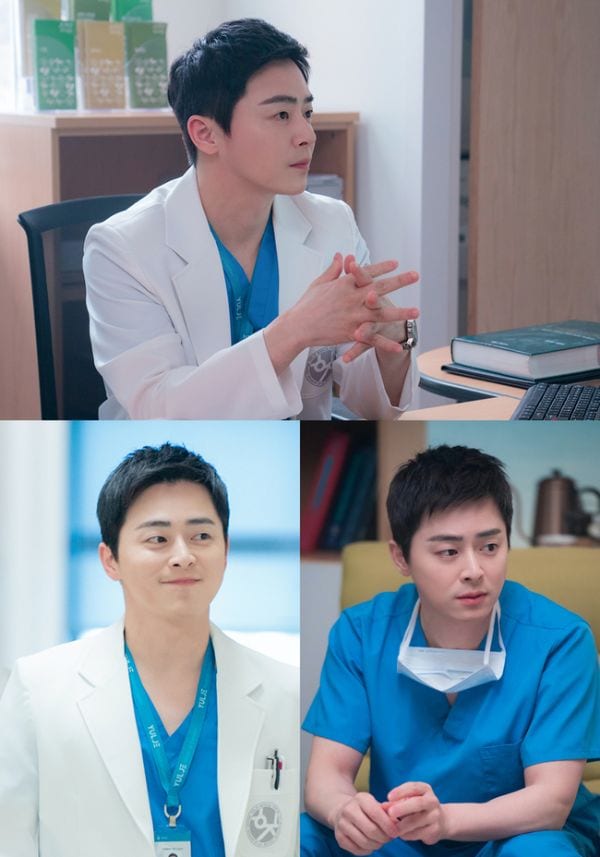 The best gang is finally back!

For once, I'm really happy to have a second season for a Kdrama.

My only complaint with this drama is the love stories. I didn't like them. The pacing of the different relationships was too fast for me, I couldn't feel their love connection.

At the beginning I shipped Jun-wan and Song-hwa... Maybe that’s my own personal preference coming through? Haha
But yeah, I didn’t buy the love stories.

Me too! I think the only couple I could think of.

That feeling of rejoining old familiar friends spills over from the cast to us. So looking forward to spend time with these characters again.

And, in the poster, it's raining! Is that a hint??

My first thought too when seeing the poster!

Of course I am looking forward to the return of HOSPITAL PLAYLIST 2.
I love all five doctors but I think pride of place has to go to my favorite Jun-wan (a rl favorite Jung Kyung-Ho) who was the first of the five to become a Chief.

I am also I am sure in a district minority who thought Jeong-won (Yoon Yeon-seok) should have followed his heart and should now be studying to become a Catholic priest.
(Nevertheless I am looking forward to watching YYS in HP2.)

To me it seemed clear all along that Joeng-won's desire to be a priest was a way of running away from his true calling- because he cared so much for his patients and he experienced so much pain whenever he lost one. He simply could not see what others could see- that his attitude actually made him a great doctor.

We will have to see what happens in Season 2 but the way things ended up for him at the the end of the first season struck me as being very much in keeping with a Catholic point of view.

Looking back now almost two years and I have only the one viewing, for me HP evolved from a medical drama into almost into a romantic drama with the various romantic plots that appeared.
I was never really convinced about the Gyu-wool/Jung-won pairing. Rosa of course was very pleased. At this stage for Jung-won to give up the priesthood for romance I really didn’t buy.
You may have a point on his decision to continue with medicine but this idea of the priesthood will probably be always somewhere in the back of his mind no matter what the further holds for him.

My first time watching I also didn't feel the JW-GU connection. But I keep rewatching some scenes in yt and it made me notice some details (and I should've expected a lot of small details knowing this is a ShinLee drama) that I didn't see the first time so I rewatched the whole drama. That's when I noticed JW's reactions and nuances towards GU when they have a scene together. Then their story started making sense in my head. I've never moved on since 😂

To be fair to the others, Junwan is the only male associate professor in the group, presumably because he was exempt from military service. I think Iksun mentioned it once.

I missed the gang so much ❤️. I am counting down the days till season 2.

If YYS was in my med school class, (and he would have been if the timeline here was real life) there’s no way I wouldn’t have dated him. 😂 HP2, get here sooner. Gah, these stills!

I’m rooting so hard for the gynaecologist and his resident! Please drama gods let it be so!

Can’t count the number of times I rewatched season 1! Can’t wait to jump into season 2!! We have been super spoilt fans, I am sure there isn’t another show with such detailed bts vids released regularly for fans! Pretty sure the way the bts vids are made can be used in film
School to teach students film
Making!!! Love love love everything about this show, I mean every thing there is!!! ❤️❤️❤️❤️❤️

I just can't help blushing!! June 17 odinii 🤭🤭🤭
If there's a Time stone, I would gladly go to that day too see the gang again especially Lee ik Jun.😍😍
No more hindrance to IkSong couple plz!

I loved Dr.Jin hwan and YYS’s character the most while its first ep was aired in, but I’m now missing the sunny Ik-jun and his cute, clever little kid the most.

You must be reading my mind, I've never been happy for a sequel this much! I really don't mind them doing this every year

“it felt so natural and comfortable, as if we had also met yesterday.”

Which they probably did 😆

Don't watch it if you haven't yet!!!! Wait for season 2 to end and binge-watch both :D

Simultaneously ecstatic and gutted. 1 episode a week is painful but each one is so so good.... CANNOT WAIT.

Wish we could have Season 2 of Smart Prison Living...

Isn't the same writer of Racket Boys that will air the 31 May?

Yes. The writer is the same for Smart Prison Living (Season 1) and Racket Boys.

EXCITED FOR THIS!!! I missed them so much!!!

I have a feeling they'll incorporate the pandemic into the story..

Looking forward to the blossoming love between Gyu-wool and Jung-won. Not sure why some of the comments here are against it. Of course we all have our opinions. For me it is better for Jung-won to fall in love now than be a priest. Better to fall-in-love, experience it so no regrets in the future. God wants everyone to be happy! Wishing hopes are not dashed in this season!

I recently recovered from a Kdrama slump and HP season 1 helped me make a comeback.. so excited for HP2. thanks @tineybeanie