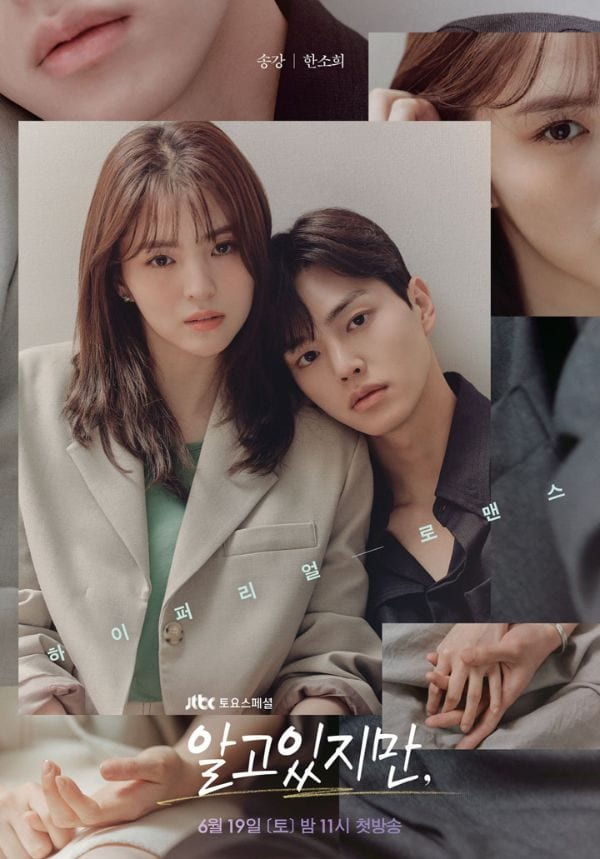 The latest teaser from Nevertheless reveals a strong spark of chemistry between Song Kang (Navillera) and Han So-hee (A Couple’s World). Based on a popular Naver webtoon by the same name, Nevertheless is a love story between a woman who doesn’t believe in love but wants to date and a man who doesn’t want a relationship but enjoys the feelings caused by romance. According to the poster above, Nevertheless will be a “hyper-real romance.”

Han So-hee plays Yoo Na-bi, a woman who was burnt by her first love so much that she no longer believes in love or destiny. However, when she meets Song Kang’s character, Park Jae-eon, she’s compulsively attracted to him like a butterfly to a desirable flower. He’s a lover to many, but not exclusive to any woman until he starts feeling strange things for Yoo Na-bi.

These two twenty-two-year-old youths fall helplessly into a sometimes recklessly sexy, sometimes passionately sweet relationship, knowing that nothing good may come out of it. Park Jae-eon is an art college student who is polite and warm-seeming, but rather aloof and indifferent about others. He is especially careful about drawing an emotional line with people of the opposite sex. But all his line-drawing comes to naught when he meets Yoo Na-bi.

The teaser begins on a snowy night, with Yoo Na-bi holding a bouquet of roses, wondering what love is. A man whose face is not completely revealed is shown helping Han So-hee write “love” on her art sketch. She smiles, but the next scene hints at a potential betrayal and her face turns dark. In the voiceover, a girl gossips about Yoo Na-bi: “With a pretty face like that and no good judgement when it comes to men, obviously her love life is in disarray.”

Copy appears onscreen: “Separation is one moment… two people who met as if by fate” Yoo Na-bi meets Park Jae-eon at a bar. She asks who he is, as he asks whether he can sit down next to her.” After he writes something on her arm, he bends down to gently kiss it and she flinches in surprise. He tells her that he likes “Na-bi” (in this case, it’s not clear if he’s referring to butterflies or Yoo Na-bi). They enjoy some playful heart-stopping moments at her art studio and on a warm spring night with flower petals floating all around. In Han So-hee’s final voiceover, she says: “I’m probably not imagining this feeling of starting something new.”

No lie, I thought the actress was Song Hye Kyo! O.o

Lol yeah they have strong resemblance! She is a younger song hye kyo. Also there’s an older actress who I think looks like song hye kyo as well - Kim yeo Jin, she’s the actress that plays mom to kim da mi in itaewon class.

@tazzo Hi! I see the similarities with Kim Yeo Kin, especially when she was younger. They're all gorgeous ladies!!

Hi @mewcrazy they really are!

Fingers crossed this turns out to be a good drama!

Same! When I saw the poster I totally thought it was her. But she looks different in action xD

That purple hoodie!!! It's Lee Hyuk and Oh Sunny couple hoodie in TLE! 🥲

I know where this is going and it's a no from me. It's a hyper real contemporary romance indeed and I see enough examples of that in real life, but for those that want something different from the usual romance kdrama this might be it.

Did you read the webtoon or are you saying this based on the premise? For me this just looks like they will end up together anyways because its a Kdrama.

Based on the webtoon. Of course the kdrama could be different, but even based on the premise the male lead seems like as much of a fu**boi as in the webtoon. It could be a well written drama even if it follows the webtoon, but I just know spending time watching that kind of story is not for me.

what is the webtoon plot?
she falls for him , he breaks her heart then realizes she is his true love?

or does she realize life is worth more than that and she needs to learn to love herself?

No and no. I don't want to spoil it here in case someone who plans to watch might read but if you want to know another user described it in detail in the comments of the post announcing the casting of Song Kang and Han Soo Hee from March 17th. https://www.dramabeans.com/2021/03/song-kang-and-han-so-hee-confirmed-for-new-drama/

Absolutely. I need a lot of skinship though. I want Something in the Rain, without the latter half.

I need a good romance!

Hyper-real contemporary romance? What does that even mean? xD

I thought this was a still from the Song Hye Kyo - Jang Ki Yong drama.

Considering I know what this is about and how it goes down... I will wait until it ends to see what happens. Then I will decide if I watch it or not.

That said, I am sure the chemistry between these two will be absolute fire!!