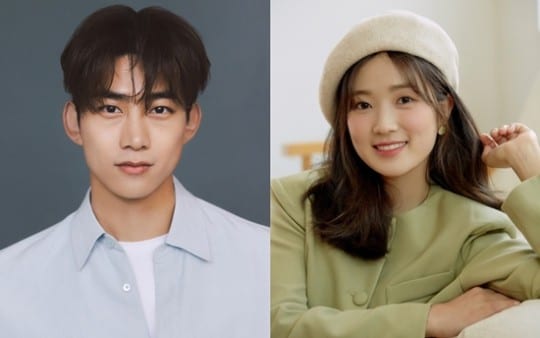 Taecyeon (Vincenzo) and Kim Hye-yoon (Extraordinary You) have both confirmed casting for tvN’s upcoming comedy sageuk Tale of the Secret Royal Investigator and Jo-yi.

Set sometime in the Joseon period, Taecyeon takes on the role of Ra Yi-on who is a nobleman with a true passion for food. If he could follow his dreams, he would move someplace just outside of the city where he would open a small dumpling restaurant and live a quiet life. But due to family and social expectations as well as actually having some intellect, he passes his state examinations with flying colors. He’s given a top level position as a government official and he soon receives confidential orders to become a secret royal investigator. Rising in prominence, he’s the pride of his family, but he lacks ambition to exceed beyond expectations. He clocks in/out exactly on time and makes sure to take full advantage of his break times so that he can eat dumplings and savor every minute lounging around at home.

Kim Hye-yoon plays the character of Kim Jo-yi. For three long years, life with her husband was a daily battle due to his addiction to gambling and his over-attachment to his mother. When she asked for a divorce, he refused. She then turned to a legal approach and sued her husband instead. But as she waits for the lawsuit to get finalized, a sudden wrench is thrown in her plans when an investigator unexpectedly appears in town. Despite social stigmas against divorce, she has a more practical and open philosophy, and understands that sometimes life hands you lemons and divorce can happen to anyone. Her dream is to start her life anew after divorce and find happiness for herself again.

Casting news had been floating around for a few months now and I’m excited to see that the drama has landed on Kim Hye-yoon and Taecyeon. I’m having a little trouble picturing them in a sageuk, especially since their roles in Extraordinary You and Vincenzo are so fresh in my mind, but I’m willing to be patient and see what the Joseon era holds for us. The drama is set to air in the latter half of 2021 and will be directed by Yoo Jong-seon (Designated Survivor: 60 Days) and written by Lee Jae-yoon (Handsome Guy and Jung-eum, My Unfortunate Boyfriend)

Hum.. I'm super happy for Kim Hye-Yoon, she's a great actress and she was lovely in the sageuk parts in EY.

For Taecyeon... He's not the best actor (I still laugh when I think about the BTS where the PD couldn't make him fall at the good place and in the good position), sageuk will be a challenge...

So the Secret Royal Investigator is the new trend?

The plot sounds interesting. I guess I'll wait for when the promotional material starts being released.

I hope it's a lighthearted sageuk a la 100 Days My Prince.

Why does this sound so much like me at work? lol ---> He clocks in/out exactly on time and makes sure to take full advantage of his break times so that he can eat dumplings and savor every minute lounging around at home.

They keep putting this poor actress with giants. At least put her with someone close to her height. Kim Hye Yoon is a delightful actress, as for Taecyeon, it is always nice to see his face.

Lmao that’s my exact sentiment with Taec. Not a great actor, but his face and those giant ears sure are nice.

Yeah, that's what I thought too! Why always super tall guys? They should put her with Kim Min-jae, Yeo Jin-goo, etc, closer to her height....

The giants to emphasize the "com" in the romcom. The similar sized leading man would make it looks like melo.

Lol, that is certainly a reason

He’s a cutie pie and this role seems to fit him. He’ll just have to play the cutie pie. Perfect!

So the super-fit government official loves eating and lounging all the time....sure.....What the heck is in those dumplings?

Why is this a sageuk and not just an office drama? I'd watch that and just put my historian lenses away.

Taking the fusion out of confusion

It's like the writer watched a lot of youth costume dramas on iqiyi and called it "research".

-sion vs -cian... simple error by the writer.

So, to get back to your wig thread, which wig style would look best on Taec? Joseon style or something more flowing like from Hwarang?

I wonder if a beanie could do some mock-ups...

All that matters is that it highlights his ears

Depending on how deep his cover is and how often, it's likely as a nobleman it's a safe bet maybe 1/2 the time that he won't be in disguise. So at least some of the time he'll have swept up hair into the knot (can't think of the name of it atm) leaving his ears in full view. 👀

Same. When they mentioned eating I could only think of Junho and the Beanies love of watching him eat in Good Manager and JBL.

Yep, the sageuk setting seems a bit off.
Oh let’s throw in a divorce to make the lady progressive & ahead of her time.

Yeah, I don't know about the divorce part.

Women in Joseon had no right to divorce.
Men in these cultures always had ways to get rid of women however. But those women certainly didn't have a post-divorce renaissance.

Yes, that's why I was expressing my doubts about that part of the drama's plot. I wonder how it will be explained.

Fool that I am, I tried to do a simple web search because I was pretty sure this wasn't a thing either, and the second result introduced me to an 18+ movie I did not know existed before now: Joseon Scandal - The Seven Valid Causes for Divorce . 🤣

That movie sounds vaguely familiar. And I do remember hearing about certain justifications for husbands to divorce their wives.

@peridot
You’re right. There were indeed seven official “reasons” men could divorce women, including failing to produce an heir and “talking too much” (no comments). However, they couldn’t take a second legal wife if the first one was alive, which gave married women some protection.

Women were expected to obey their fathers, husbands, or in the absence of these, their sons. I don’t know enough about their legal rights, but divorce was not one of them.

We talked a little bit regarding this in BOSSAM Episode 5, where the scam of the day was regarding a concubine who wanted to become a legal wife so her son would be legitimate (not allowed). The first wife had been kicked out for failing to have a son.

I like the casting (Taec is back so soon after Vincenzo!) and I appreciate that it’s a sageuk comedy, but that writer makes me extremely nervous.

Hmmm I'm not sure about this writer...

I like Taecyeon but I never thought he was good at playing a serious deep role but for some reason, his roles are often too serious.
He seems like a super nice cheerful guy in real life, I'd like to see him playing a nice regular guy for once.
(I liked him in Bring it on Ghost)
I think comedy will be good for him but sageuk might be a challenge?

Divorce in the Joseon era and Taec in Hanbok?
Brain does not compute

Brain doesn’t have to compute. And you have another Joseon Secret Agent. This drama is calling you!!!

So, a style question.

Joseon style hair and garb for Taec, or something a bit more flowery like Hwarang? What’s your flavor?

I think they’ll go for the full Joseon, according to what Taec has posted on his IG and Twitter.

Awww..i was hooked as I read dumpling store and then imagined him being Dae Jang Geum...but then it became royal investigator ☹...continue reading and he's like Hotaru from Hotaru no Hikari. Hahaha

Both ML and FL characters sound quirky. Bring on the dumpling eating show! I hope he makes different version of dumplings in each ep. Tbh, when I read dumpling and drama together I remember Kim Woo Bin in Heirs. I can't recall if he made dumplings or his hair looked like a dumpling 😅

Taec & food sounds about right but Taec, food & trying to do minimal work is spot-on perfect 😆

You know it!
Now I’m reminded of all this BTS 2PM videos where Taec is taking a nap 🤣

I was thinking of Wild Six where he was all about spending & touring instead of trying to complete the mission.

Sounds like a comedy. Anyway the male lead's life experience is almost exactly the same as mine, except that I chose the path myself because I'm not rich enough to just sit down and collect rent.

I could use some dumpling p o r n... or may be Let’s Eat Joseon Edition.

I feel so bad for Jo Byung-gyu! Those nasty, false rumors have dented his career. I hope he comes back stronger!
P.S. Had he gotten this role, it would've been such a cute reunion with Hye-yoon.

I love Sageuk and this one sounds most entertaining. From the description, I am unable to see it as anything but a comedy, it am willing to be proved wrong. Having watched Vincenzo (who hasn’t?), seeing Taecyeon as a “good “ person might be hard to do especially as he was SO good at being bad and manipulative!

I fervently hope THIS series makes it to the Australian audiences - we miss out on so many Kdramas. If worse comes to worse, and once again we Downunder miss out, I will live vicariously through Dramabeans reading their wonderful recaps!