Set against the backdrop of the Gwangju Uprising in May of 1980, a young med student and a nurse meet. Though the two are from different worlds, they fall deeply in love, but their happiness soon turns tragic in the wake of political violence and social unrest.

Set against the backdrop of the Gwangju Uprising in May of 1980, a young med student and a nurse meet. Though the two are from different worlds, they fall deeply in love, but their happiness soon turns tragic in the wake of political violence and social unrest.

Youth of May: Episodes 7-8 Open Thread 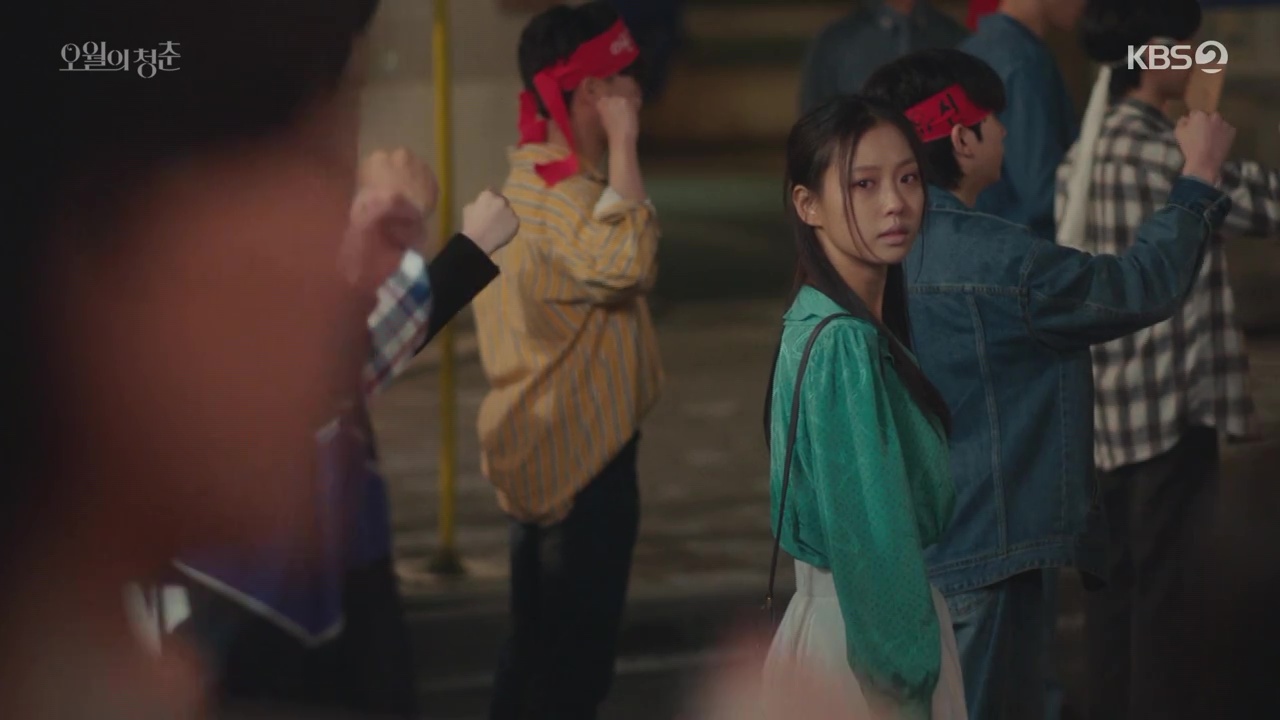 How many times can this drama break and mend my heart? (Answer: Infinitely.) Our couple’s journey has had many highs and lows, and we’ve reached a point where their love and attachment is so strong that the lows hit hard. If this were any other drama, I would think this is the worst it can get… But history has other plans. 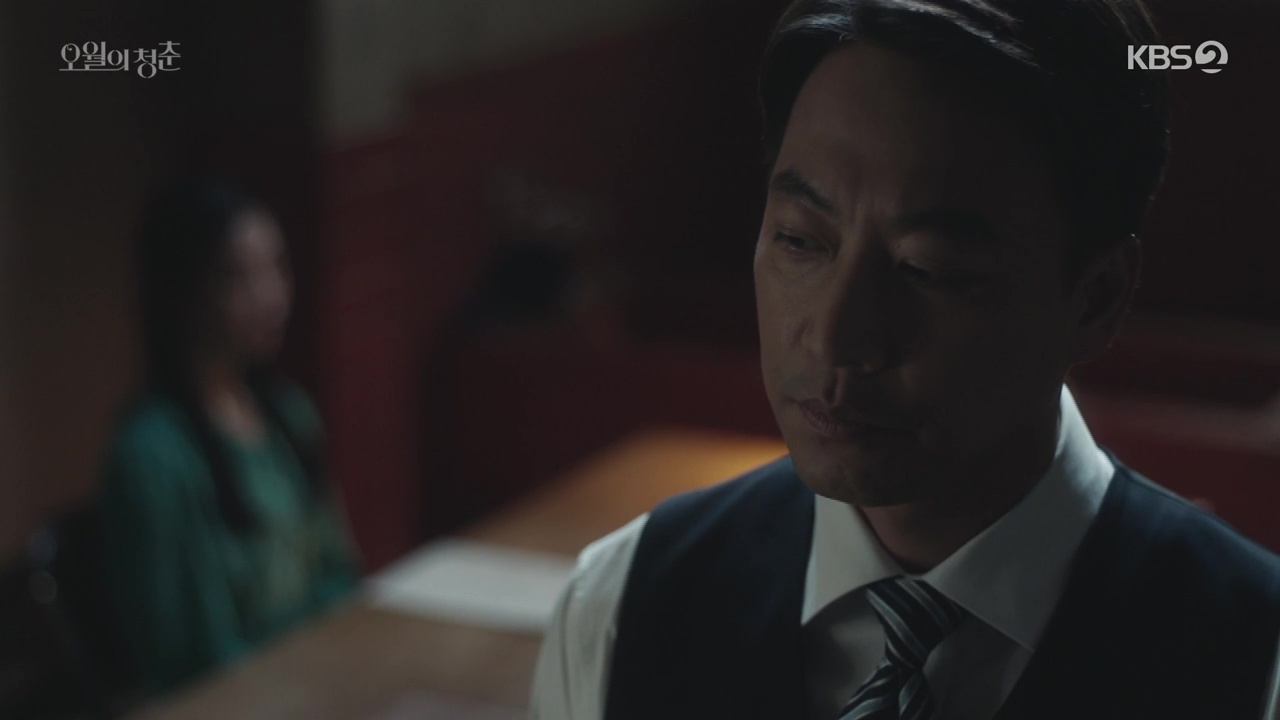 Now that we’re halfway through the drama, things are really picking up. There’s so much thrown at us, and so fast, that I often have to hit pause to collect myself. Right off the bat, Myung-hee is brought into Ki-nam’s headquarters, and Ki-nam uses her connections to student demonstrators in order to halt her passport application. But Myung-hee knows that the real reason Ki-nam is doing this is Hee-tae.

Speaking of whom, Hee-tae hears that Myung-hee never came home and goes crazy trying to find her. After getting nothing out of Soo-ryun and the police, he decides to check Naju, where Myung-hee said her parents live. He, of course, doesn’t find her, but he does have a sweet interaction with her parents (who are delighted to know that their daughter is dating a med student from Seoul, haha).

Just as Hee-tae is leaving Naju, he sees Myung-hee trudging towards him. He can tell that something’s wrong, and he tries to take her hand, but she coldly dismisses him. She tells him to leave, which he reluctantly does, and continues on to her parents’. And, facing her father, the first thing she asks is, “Is it true that I’m a commie’s daughter?” Oh gosh, the immediate change in the air… 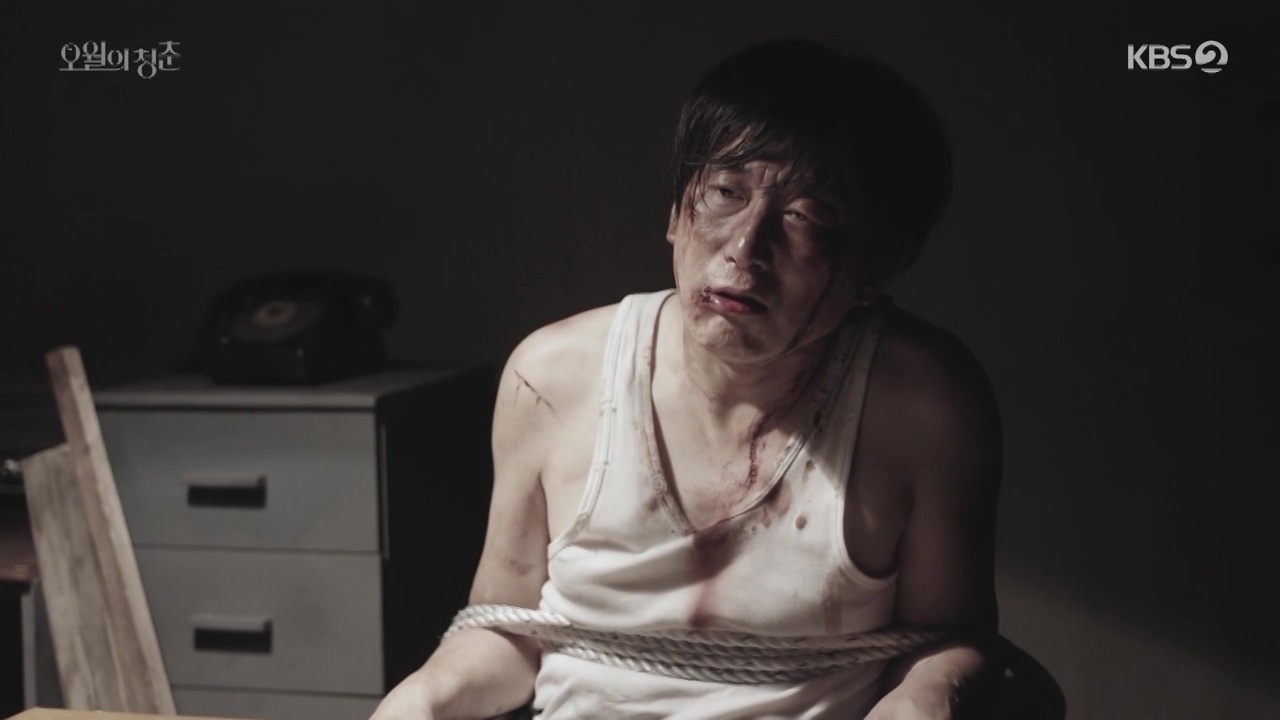 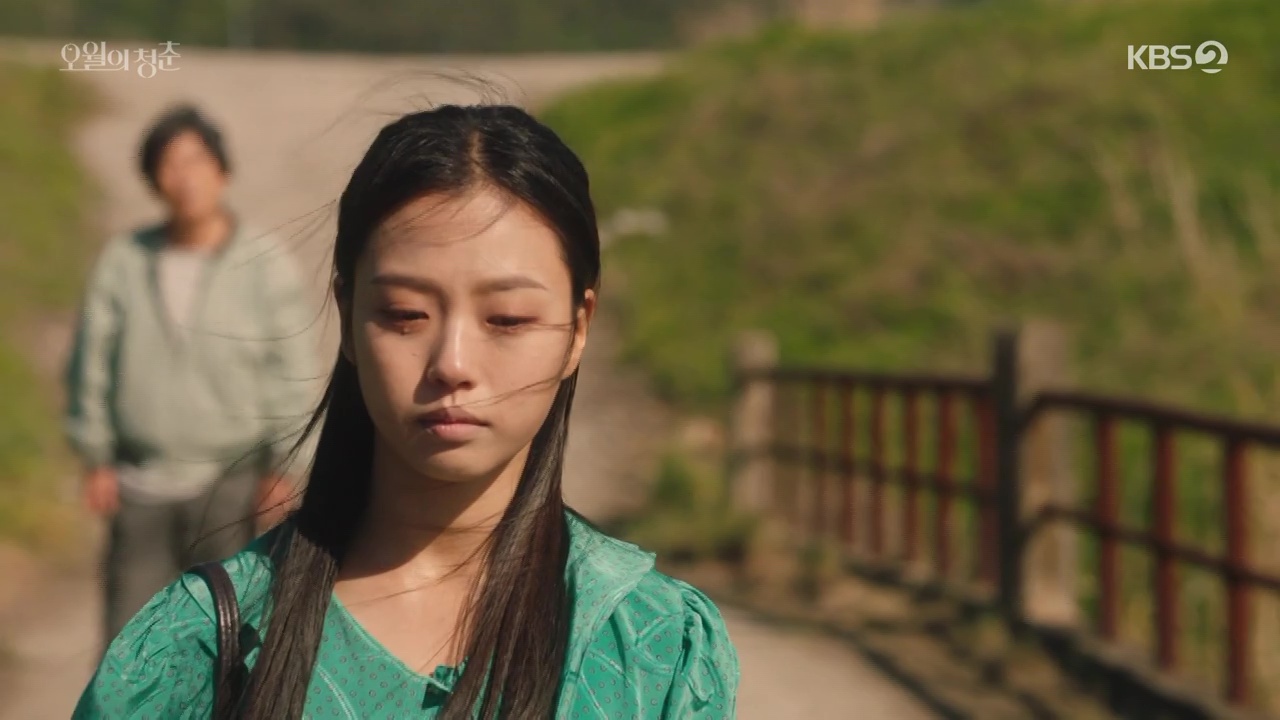 According to Ki-nam, Myung-hee wouldn’t have been able to leave the country anyway, because her father violated the National Security Act years ago. Ki-nam was neighborhood buddies with her father, yet he was the one who had him tortured and permanently damaged his leg. Her father wanted to hide this from her and just leave it in the past, but she cries that it’s already affected her. The least he could’ve done, she says, is have told her all the bad in her life wasn’t her fault.

Myung-hee heads back home, to Gwangju, where Hee-tae is waiting. He’s now desperate to know what’s wrong, as she keeps ignoring him. Finally, she blurts out that she’s running away because she’s scared of him. She reveals that because of Ki-nam, she can’t study abroad, and she’s scared of what else might happen if they’re together. For a second, I was genuinely worried she blamed Hee-tae, but flashbacks tell us that she’s only saying this to protect him. Ki-nam threatened to ruin Hee-tae if she didn’t leave him — as if I didn’t hate this waste of human space enough. 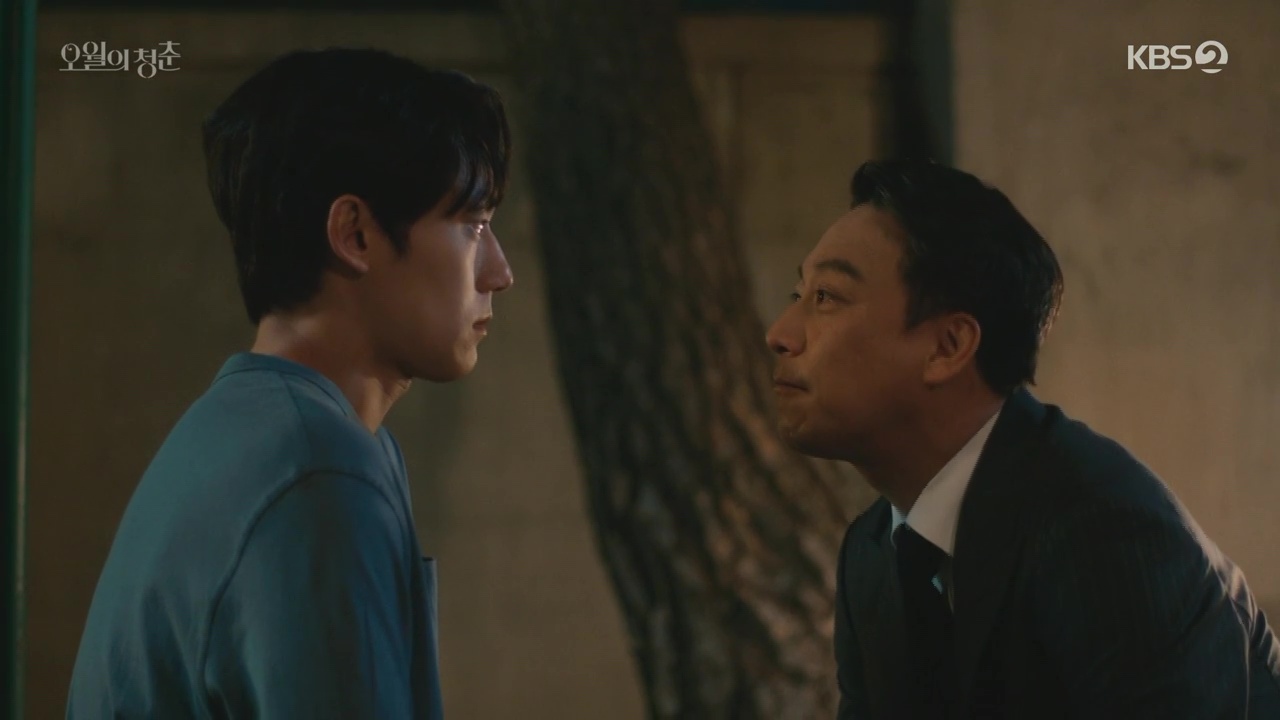 The following scene where Hee-tae confronts Ki-nam is absolutely chilling. You can see how determined Ki-nam is to take Myung-hee down, and you can see Hee-tae practically breaking apart as he begs him to leave her alone. Hee-tae is on his knees, crying that he’ll marry Soo-ryun, but Ki-nam already expected that of him. For now, Ki-nam orders him to return to Seoul with Soo-ryun; Myung-hee’s well-being will depend on how well he behaves.

Meanwhile, Soo-ryun finds out about Myung-hee’s situation and, feeling more guilty than ever, she finally, finally tells her family the truth. Her father and brother argue over the matter, leading to her father getting hospitalized for chest pains. With that, Soo-ryun tells Soo-chan that she’ll take care of the problem herself. She’ll move to Seoul with Hee-tae.

The night before Hee-tae and Soo-ryun are supposed to leave, Hee-tae stops by Myung-hee’s boarding house. He gives her her earring back, apologizing for it being broken. “That’s how I am,” he says. “Anything that gets close to me gets broken.” He says goodbye by telling her to stay strong, and she wishes the same for him. They part, with her closing the door between them. Only then, on their separate sides, do they allow themselves to cry. 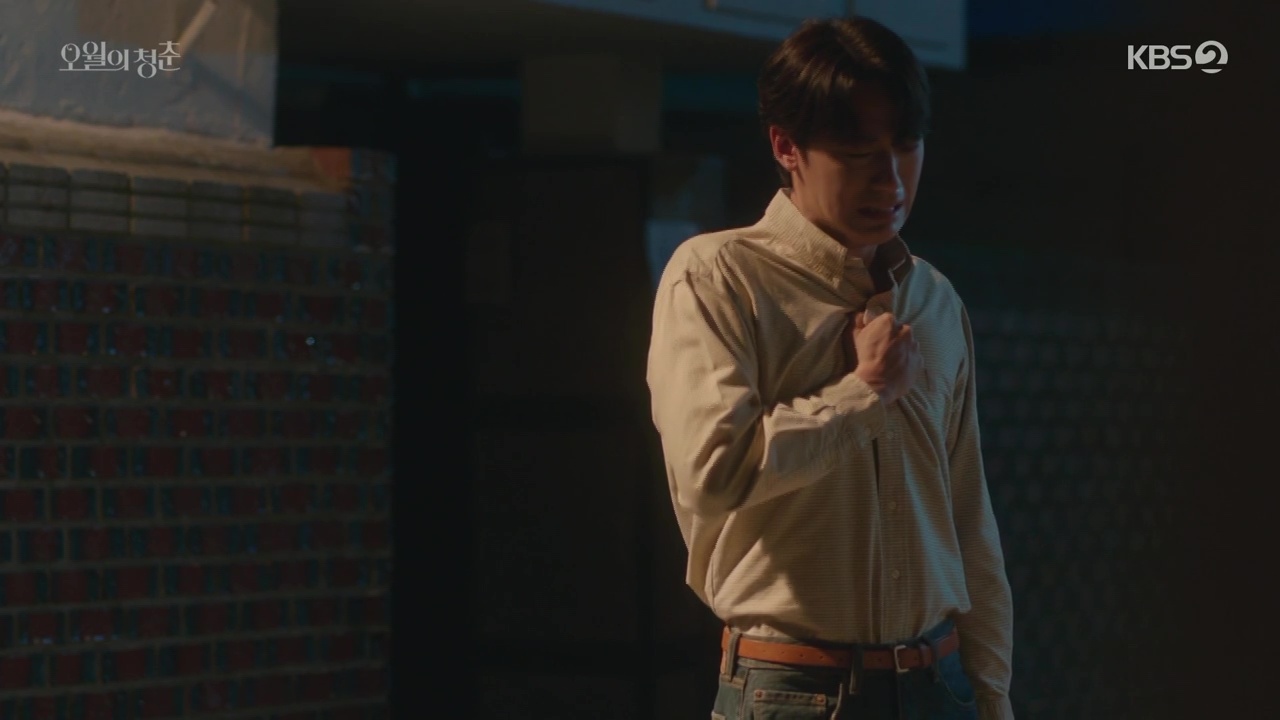 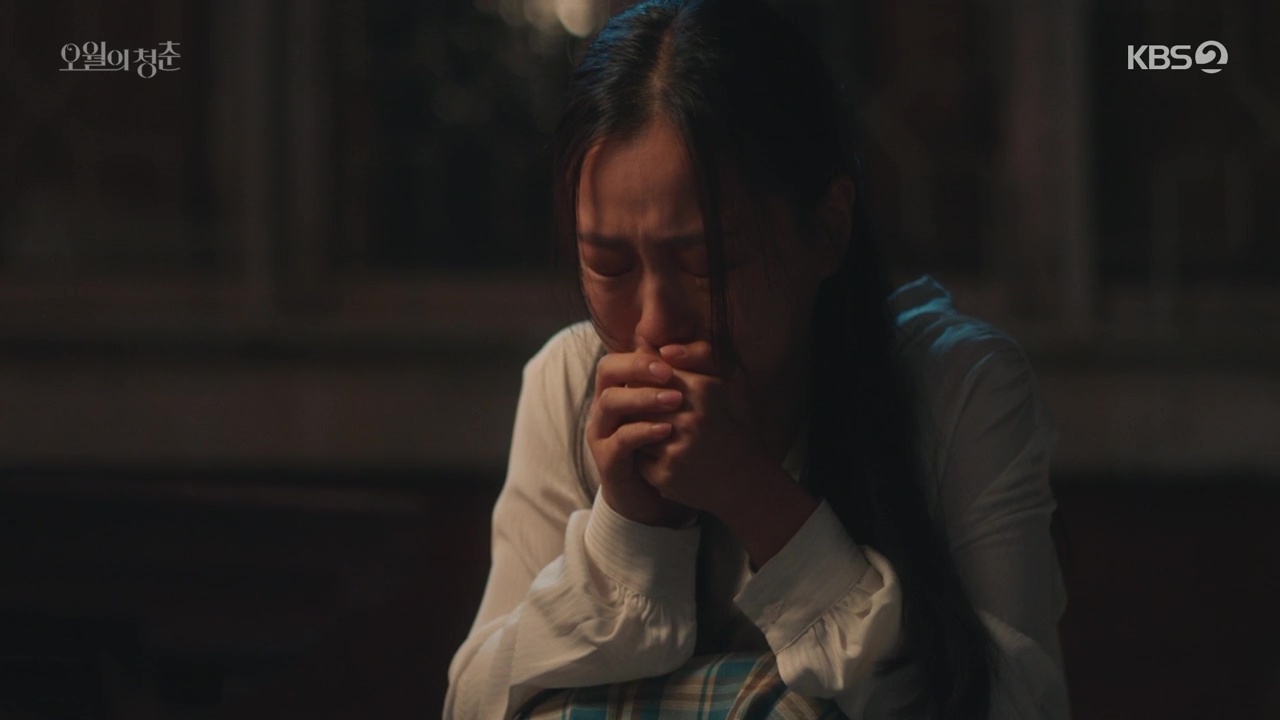 Ughhhh, this sucks. I mean, it’s great because our main characters are taking on what I think is understandable noble idiocy. But, god, it’s awful for them. Hee-tae and Soo-ryun are sent off to Seoul and become awkward roommates. Soo-chan is doing everything he can to get Myung-hee her passport, feeling terrible for ever getting Ki-nam involved. And poor Myung-hee is keeping herself busy at work and home to keep her mind off of Hee-tae.

There are two other characters I’ve been interested in — Hee-tae’s friend Kyung-soo and Jin-ah’s older brother Kwang-kyu, who are both in the military and happen to become good buddies. With the help of Kwang-kyu, Kyung-soo manages to sneak a phone call to Hee-tae’s apartment. Unfortunately, Kyung-soo gets Soo-ryun on the phone instead and never gets to reach Hee-tae. Soo-ryun has been hanging around the apartment, while Hee-tae constantly goes out. She’s just itching to get back in the fight, especially when news breaks that Seoul protests are being forced to disperse. 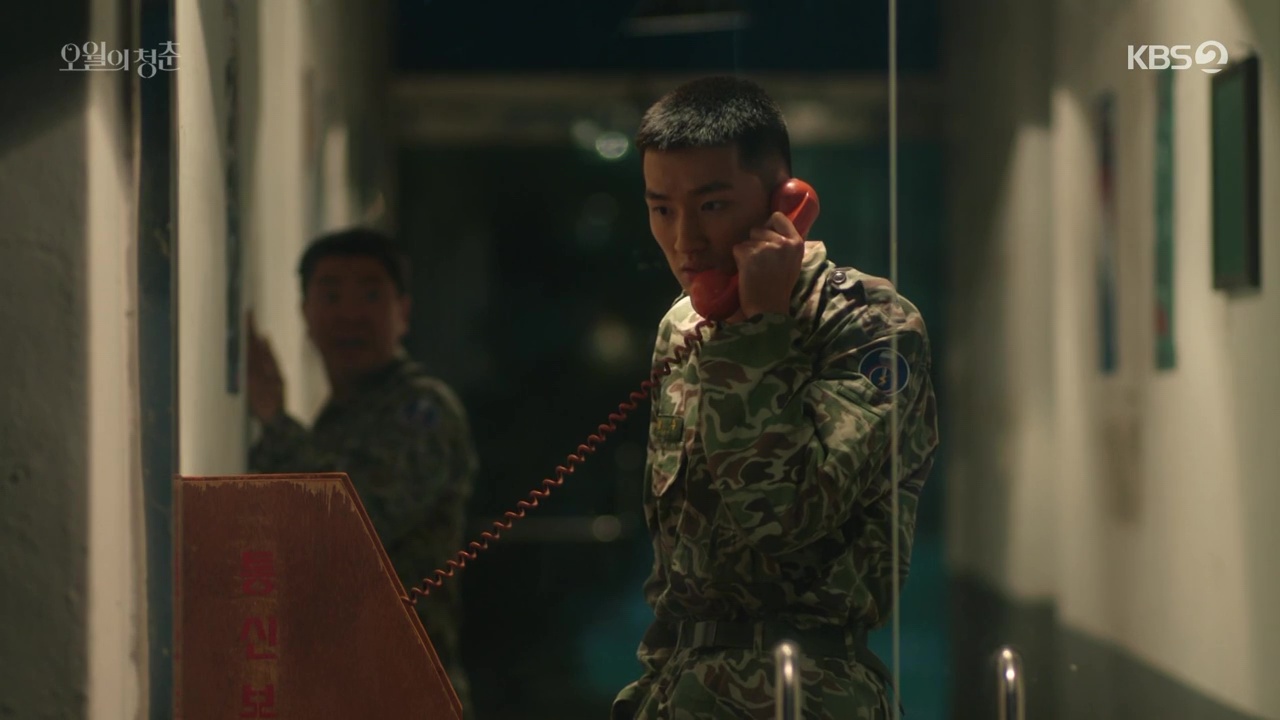 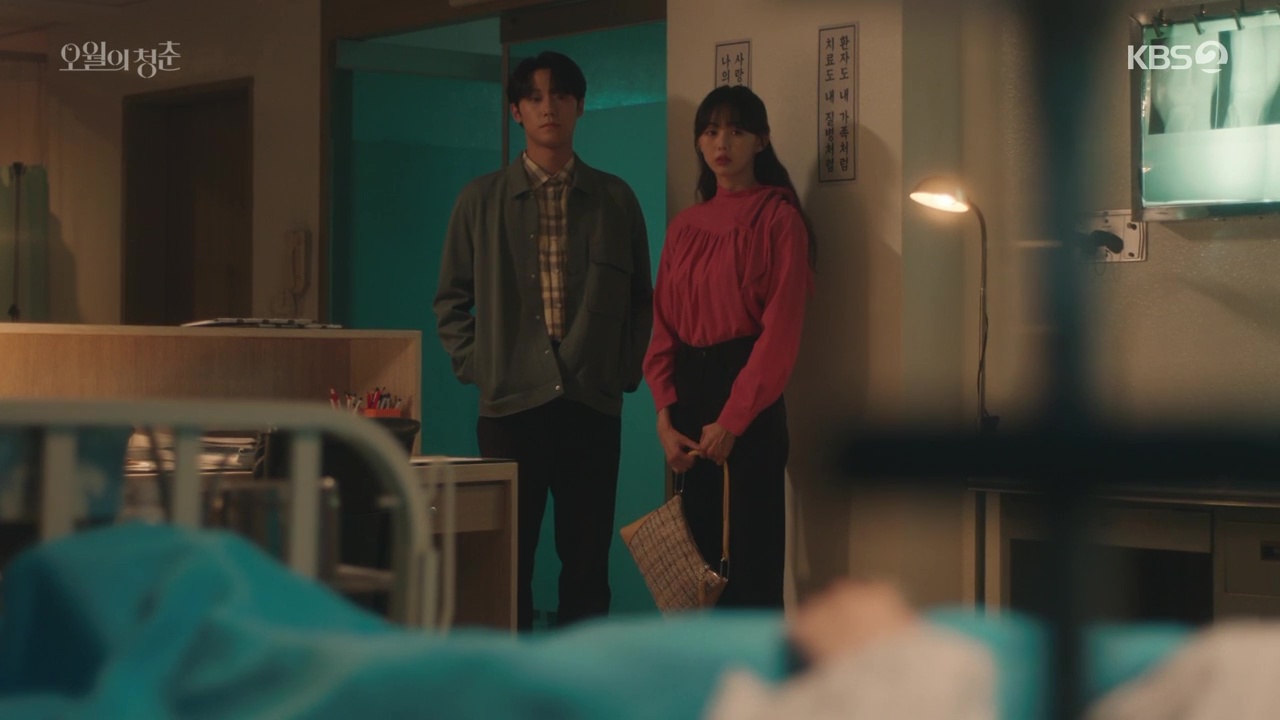 Soo-ryun eventually accuses Hee-tae of punishing her by avoiding her, and she cries that she knows his misery is her fault. To her surprise, Hee-tae firmly tells her that he doesn’t blame her and he never has. He takes her to the hospital, where he’d been going all this time, and reveals the reason why he went to Gwangju and the blind date in the first place: Seok-chul.

Seeing Seok-chul changes something in Soo-ryun. She sees how brave Seok-chul must’ve been, and she wants to be brave too. So she decides to return to Gwangju, to Hye-gun’s hideout, to be where she belongs. She encourages Hee-tae to return as well, revealing her last conversation with Myung-hee and Myung-hee’s true intentions behind their separation.

Soon, Seok-chul is safely transferred to Gwangju. Myung-hee is the one who handles the paperwork, and just seeing Hee-tae’s signature gets the emotions going. She later has a cathartic moment with her preacher, admitting that Hee-tae had become a reason for her to stay in Korea. She leaves the church, heartbroken that her reason is gone… until that very reason shows up in front of her. AHHH. 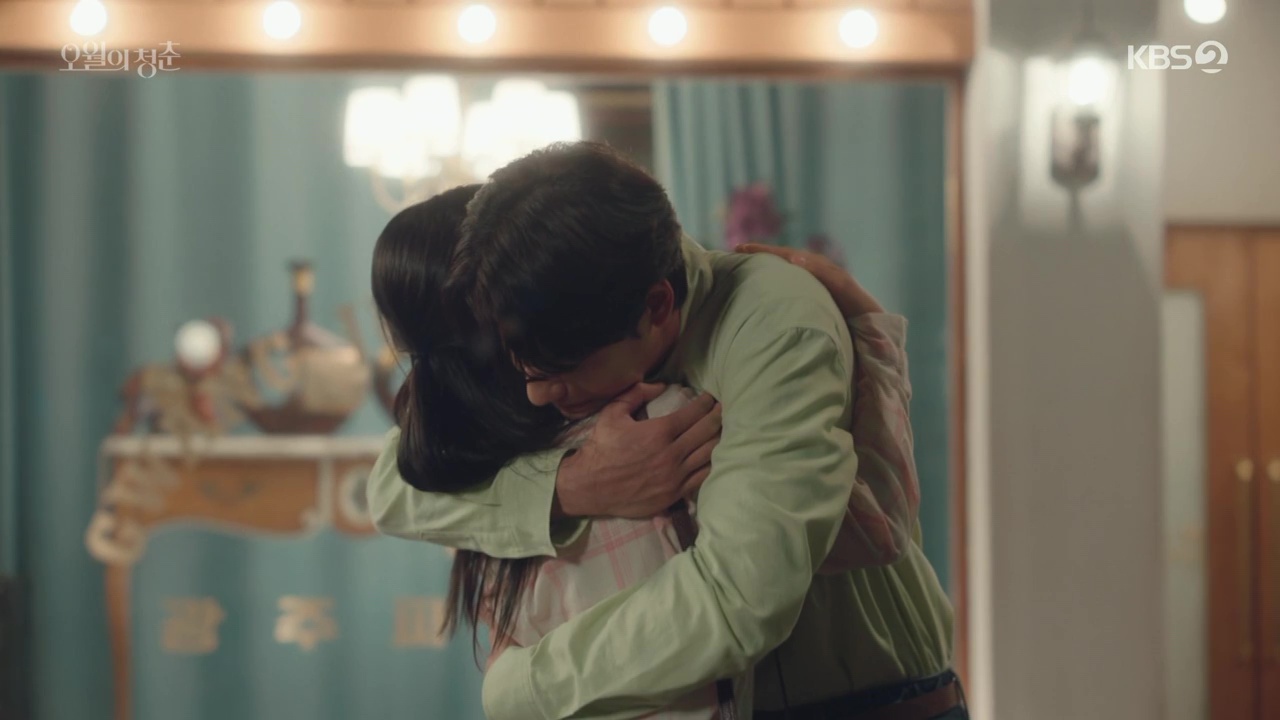 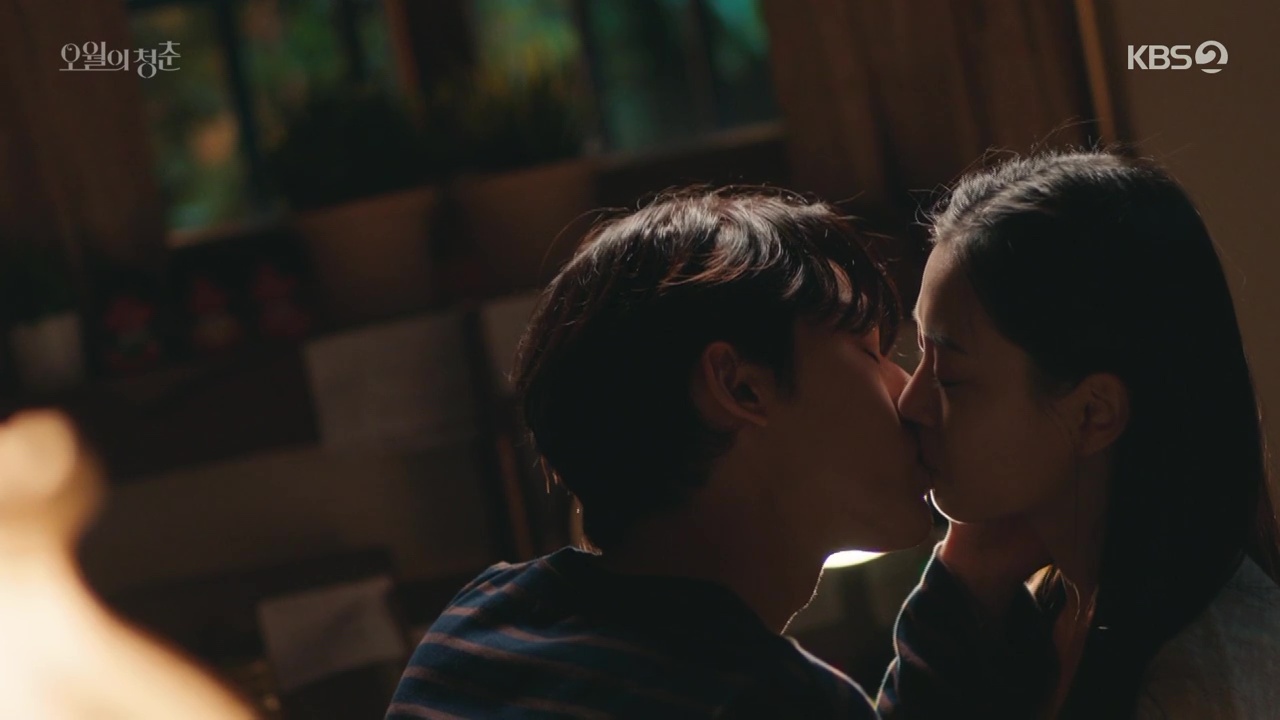 Staying where he is, Hee-tae says, “I know I shouldn’t have come… But I want to be with you and stay by your side.” He gets choked up, asking if he can step closer. But she’s one, two steps ahead and runs into his arms. I’m a sobbing mess as they clutch onto each other. This freaking couple just does things to me.

Hee-tae goes home with Myung-hee, and they confirm how much they mean to each other. How much they changed each other’s lives. He assures her that she doesn’t have to be afraid anymore, and he kisses her as tears fall down her face. At the same time, Soo-ryun arrives at Hye-gun’s hideout and finds it completely ransacked.

Oh, here we go. The Gwangju students were so fired up after the news in Seoul, and now Ki-nam and the Defense Security Command are calling for emergency martial law. Soldiers are immediately sent out, and we see a truck carrying both Kyung-soo and Kwang-kyu headed straight for Gwangju. The visual of the truck passing the sign is haunting, to say the least. Things are about to get real. I thought I was ready, but I don’t think you can ever be ready for something like this. 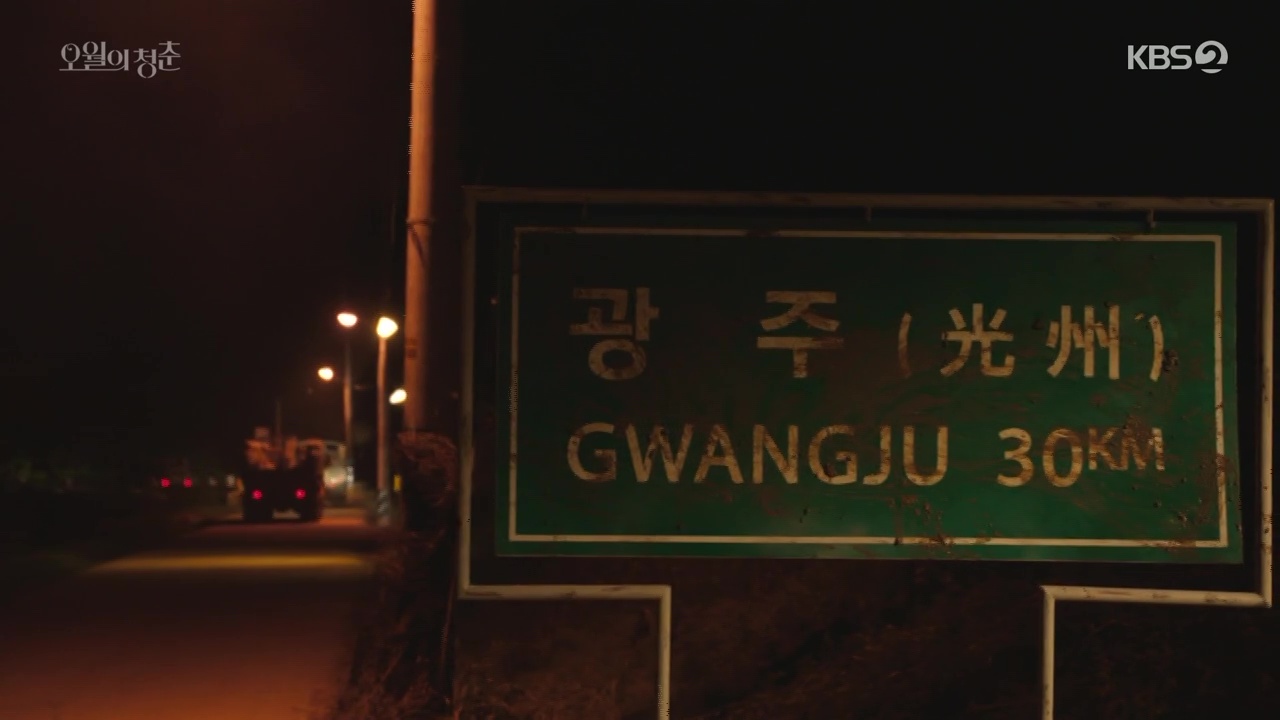 So Hee Tae's dad's cartoon villainy is unfortunate. Even if her dad had that in his past Hee Tae's dad could still figure out a way for her to leave. He is being cruel for no reason. As for Soo Chan, he is both pushy and sympathetic. He really wants to help her, but he doesn't know how, so he pushes until she is uncomfortable. I feel like he is the one whose bones they find, but who knows. It could literally be anyone.

I wish they make Hee Tae's dad to be more layered rather than just a pure evil that does not resemble human. That would've make the story much more interesting.

I agree. Because they are showing the Gwangju Uprising and the people in that position did horrible things, let's just say it was probably safer to make him pure evil.

That's a good way to describe Soo-chan. I really like him and hope the bones are not his. I could see Soo-ryeon dying but who knows.

I think the skeleton is Soo Ryun.

And maybe the guy at the train station is her friend who gave her the student manifesto?

I cried for and with Hee-tae and Myeong-hee again. Things are coming to a head now but I'm glad to see our leads together at least.

The 'Gwangju' set in the show takes away a little bit of realism from the protest and demonstration scenes. The scene with the military convoy driving past the Gwangju scene finally made it seem real and imminent.

The soldier's watch being the same as the one found with the skeleton - red herring or was he actually the one (among many) who died?

Was it the same watch? I couldn't tell. We've seen two pocket watches so far. The soldier's and Myung-hee's dad's.

It seemed to have the same broad strap and large dial but yeah I'm not completely sure.

Yes, I keep thinking that the sets for Gwangju make it seem so small and the main street set looks like it belongs in a musical. Maybe seeing the movie Taxi Driver has given me a bias. It was so well done and so gritty and real feeling.

Yes exactly! 'A Taxi Driver' was my point of comparison as well. And yeah the musical thing is exactly right. You feel like somebody is going to start dancing round a lamppost any minute now!

Well, the taxis look exactly like the ones in Taxi Driver.

I have this weird feeling that things are going to work out somehow for our OTP. My theory is that the body discovered at the train station in the beginning was evil Mr. Hwang's. Or, I could be totally delusional in my desperation for a well-deserved happy ending for Hee Tae and Myung Hee. We'll see in two more weeks...I am going to lose it if anything bad happens to the dongsaengs though...

I'm really starting to think that maybe our couple will get their HEA. Maybe. That skeleton maybe someone else's right? I think it maybe equally heart breaking but I just want hope.

I have some difficulties to understand Hee-Tae. He's super smart and nice but he's living in ideal fantasy when everybody knows that his father is a monster, he knows it too. I agree that his father's acts shouldn't influence his life but it's in an ideal world. I have no issue with him dating Myung-Hee but he should use his brain to do it smartly.

Lee Soo-Chan was great. He was angry against his sister and father who used Myung-Hee and didn't care about her as long as they could save themselves.

Lee Soo-Ryeon used to see the world turning around her. Even when she was angry against Hee-Tae, she made it about herself.