A glimpse at our cast and college life in promos for From A Distance, A Green Spring 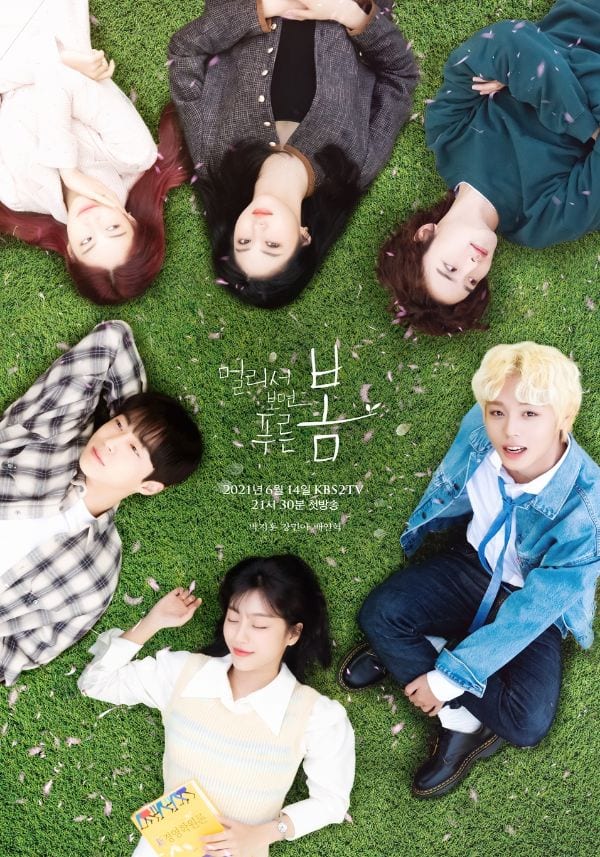 The poster for campus romance drama From A Distance, A Green Spring features its six main characters lying together on the grass on a sunny day. Although college life seems like a brilliant time, full of potential, this drama depicts the harsh, cold realities of university students. The title refers to youth (chung-choon in Korean). The characters that make up the hanja for youth mean green spring.

The teaser begins with a famous Charlie Chaplin quote:

“Life is a comedy in the long-shot, but a tragedy when seen in closeup.”

Enter Park Ji-hoon (Flower Crew: Joseon Marriage Agency) playing the part of Yeo Joon, a freshman that is beloved by everyone but hides a darkness inside. In the teaser, he’s shown being admired by a ton of girls on campus, and he has even more followers on Instagram. He boasts that after he went to orientation, he gained a fan club. The hashtags that introduce him roughly translate to: “#Face-restaurant,” “#Handsomeguy,” #MyungilUniversityGod.”

On the other hand, Nam Soo-hyun, played by Bae In-hyuk (My Roommate Is a Gumiho), is shown pitifully. He barely catches his much-needed sleep standing up on buses and works endless part-time jobs in the rain to pay for his tuition. In his voiceover, he sounds defeated, “Dating? Leisure? A guy like me can’t afford to do that.” The hashtags around him say: “#Nationalchampionofdirtspoons,” “#Alwayslackingsleep,” “#Unrivaledpsycho.”

Kang Mina (Beyond Evil) plays Kim So-bin, who works extremely hard but is devastated by the gap between her expectations of the fruits of her labor and reality. As she spends yet another night at the library, she ponders to herself, “For me whose only strength is working hard, I don’t think I can endure with only that.” She’s described by the hashtags: “#Earnestandtimid,” “#Zeropresence,” “#14yearonesidedlove.”

In the final scenes, these three characters are shown at some of their lowpoints, and Park Ji-hoon’s voiceover says, “Green chung and spring choon [referring to chung-choon]. Don’t make me laugh. It’s probably a just green dream from afar.”

In this teaser, the character descriptions for the other characters played by Kwon Eun-bin (Dear M, Youth of May), Woo Da-bi (Dear M, Live On), and Choi Jung-woo were not released. Hopefully, the next round of promos will contain some juicy details and shots of these three.

KBS Monday-Tuesday drama From A Distance, A Green Spring, directed by Kim Jung-hyun and written by Go Yeon-soo, will begin airing on June 14.

Unfortunately, I think this drama has got nothing going for it. Neither the plot not the actors spark any interest.

I hope Dear.M actually sees the light of day.

Hum... his hair are distracting.

It's always funny how a character can be so famous just because he/she's handsome/beautiful. It's so weird.

But I suppose it is possible in Korea, where people go so crazy for plastic surgeries, and they are very influenced by the appearance.

Meanwhile, it looks like four years in the making production since 2017 and this one of the shows that producing for hardest four years even though during the Covid-19 pandemic. I think it was badly affected one of these. Also, Seo Kang-joon had a hard time on dyed his own yellow hair.

Still so excited to see what these actors will bring to this project. Thank you, @tineybeanie for the news recap.

A good coming-of-age story is always my cup of tea. I hope it is executed well.

Now, the all important question:

Who gets the girl?

From what I have read from other about the webtoon the romance is between Yeo Joon and so Bin.

Oh no, not watching this then. The SML characterization seems more interesting than the typical hot ML

Not to comment about the plot and cast, honestly I don't know most of them. But what struck me the most (so that I have to log-in and comment after several inactive years) is, how did they use the same poster concept of Soulmate - the iconic Kdrama 2006, and no one pointed out? I'm sure first generation of Dramabeans readers can remember how big Soulmate was on Dramabeans around that time.

Here's the link to the Soulmate poster, or you can just google it.
https://www.dramabeans.com/wp-content/uploads/bpfb/tmp/soulmate.jpeg