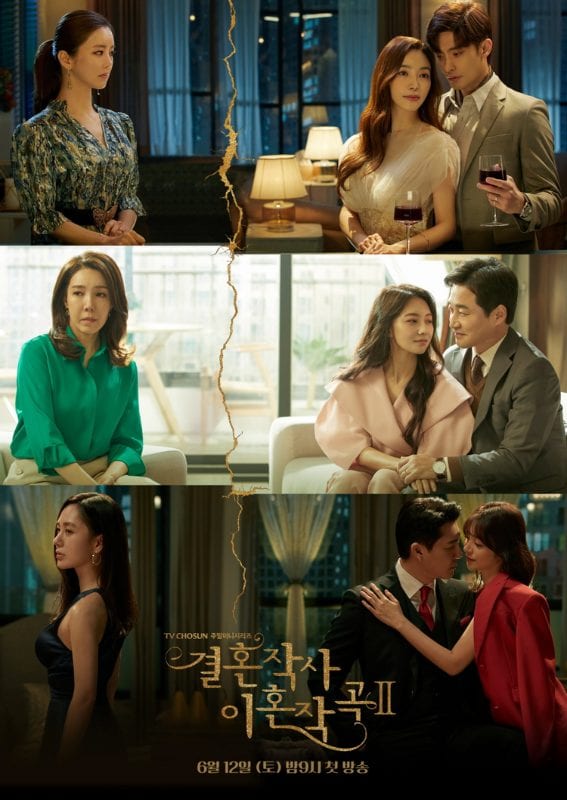 After being a bit of a sleeper hit in its first season, Love (ft. Marriage and Divorce) is back with Season 2! The production promises an exciting season that will show what happens when Pandora’s box is opened. What is in Pandora’s box, you ask? Why, the fury of three women — in their 30s, 40s, and 50s — as they react in the aftermath of heartbreak, infidelity, adultery, and other painful things along those lines. These women have had their marriages crumble and now find themselves at odds with their unfaithful husbands and their new lovers. Sounds dramatic.

I did watch season 1 and regretted immensely. I do not care for any character enough to go through season 2.

I am not touching this show even with 10-foot pole.

For a writer known for her crazy makjang dramas, the first season was more boring and tedious than anything, especially the second half. I don't know if I'm masochistic enough to try the second season.

I watched the first season - reluctantly - and managed to struggle to the end. The youngest of the betrayed wives was so unpleasant I couldn't but feel slight sympathy for the cheating husband but the other two husbands were so boringly typical of men going through mid-life crisis I don't think I could stand another season of them. I wish the wives 16 episodes of satisfying revenge, and the two men a lifetime of regret. But I won't be watching.

The most enjoyable part of part 1 was when the daughter of the 50s couple read her father for filth. I have never witnessed a character so accurately and precisely describe the utterly hypocritical behavior displayed by the father and his incessant need to be allowed to cheat. Daughter took him to task , it was highly satisfying.

The rest was just a way to give each man a "reason" why his cheating was justified. But there's never a reason to cheat.

I hated that Part 1 ended in the most non-ending way possible. It was just the end of an episode. It wasn't even a natural pause in the storyline. Part 2 will be all the more makjang simply bc they want to be like Penthouse. It's all blah, blah, blah.

The creepiest part is the stepmom thinking she has a "chance" with her stepson. EWWWWWWW!!!!!

I agree I love the scene of the daughter showing her Father the accountability of being infidelity's without screaming with her Father. She voice out in a controlled voice the disappointment and feeling of hurt the way her Father betrayed them. Also the young married couple I don't tolerate of cheating But, I sympathize with him the way his wife treated him and lead to cheat his wife. However, is still not an excuse to cheat. I hope this seasons 2 will give justice the story to the spouse who been cheated.

First, I was interested, wanted to know how they all would solved their marriages' problem. The scene and act where the daughter of the 50s couple confronted her father about the affair was good. But, it turned out that almost all the boys were the bad guys, one extended to his father (who not so secretly in love with his first love). Yeah, that pedestal on first love again.

Then it escalated to just a simple festival of adultery, which you didn't have to have a reason to join the party, just enjoyed it to the max, you didn't even have to buy the ticket and the hell with everyone else.

So, I left and never turned back. If one kills several people, he/she would be called a serial killer, then this drama was about serial adulterers or row of adulterers... Do they also be punished by locked forever in mental institution?

Anyone else have a problem with getting kicked out of the website? I've tried to post 3x.
Ive never seen a kdrama that has so many viewers leave early in season one never to return. The comments included it was too real and the behaviors were too close to home.
Based on the tedious pace and writing I predict Sung Hoon will be the only happy ending. They're writin Hye-Ryung as the most spoiled, self-absorbed character in some time. The professor doesn't stand a chance with the actress and A-Mi will self implode her relationship with Yu-sin.
Looking forward to rehashing episodes with everyone!

This is a sordid tale of how to justify adultery. The husbands are all horrible. Sung hoon's wife is self-centered but he should have talked it over with his wife and gotten a divorce before hooking up with someone.
I watched a few episodes and stopped because I found the conversations and actions boring. No character development.