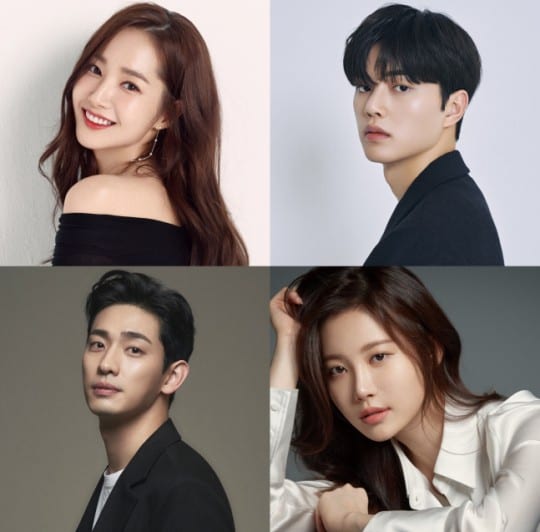 Taking a slight spin on the usual office setting, our characters work together at the National Weather Service where we’ll explore office dynamics as well as the turbulence that occurs when love sparks between co-workers.

Park Min-young takes on the role of Jin Ha-kyung, whose job focus at work is general forecasting. Her character is strictly by-the-book and she keeps clear boundaries between the different areas in her life. Whether it be work, self-care, or personal relationships, everything is neatly compartmentalized and she never mixes business with pleasure.

Song Kang’s character is Lee Shi-woo, who handles forecasting for special/severe weather. Having a free-spirited soul, he likes to think outside of the box. Due to his confident but humanistic nature, his colleagues find him easily approachable and he gets along well with others.

Yoon Park plays Han Ki-joon, who works in communications and is a spokesperson for the weather bureau. Although frank, he is an intelligent and compassionate speaker, and he was quickly recruited by the communications team after initially being hired for general forecasting.

Last but not least, Yura plays weather reporter Chae Yoo-jin. Her dream had been to chase storms and to make an impact by reporting about weather warnings live on the scene. Once she was hired, she was assigned to “weather and lifestyle,” and soon learned that even general weather can be unpredictable and that the job is not as middling as she thought it would be.

Directing for the drama is PD Cha Young-hoon (When the Camellia Blooms), and writing will be done collaboratively by Sun Young and Kang Eun-kyung (A Couple’s World, Ms. Temper and Nam Jung-ki)

The National Weather Service is a different office setting, the writers are promising, but I'm Song Kang-ed out. I really like Park Min-young, but I'm not interested in this pairing at all.

Another Song Kang casting. Does he ever rest?!
Make the audience miss you gosh

The audience can miss him during his military service.

Every male kstar goes through that and every fan expects that. It seems he is being overworked imo

Park Min Young noonaing again. I'm not sure I'm a fan of this pairing, they are over a decade apart. It bothers me when the sexes are switched and it bothers me now. Hmmm, Song Kang is a busy lad, but I get it for him. Work until you are established, than we miss you when you go into the army.

Nope, I totally get where you're coming from. Even though they're only 8 years apart, Song Kang feels a lot younger (probably due to his playing high schoolers so often) and Park Min-young's been playing a working professional for a decade (since City Hunter in 2011), so the age gap feels much bigger.

I'm disappointed that I'm not more excited to see PMY in a drama again. I feel a bit underwhelmed for some reason. Maybe like @missh I'm a bit Song Kang-ed out myself? Maybe like @beffels I'm not crazy about the decade+ noona-ing? I know I'll at least give it a go, and since PMY can create chemistry with a potted plant, it could be interesting.

It was @kafiyah-bello but I also agree with the sentiment. Noona romances in general aren’t my favourite, especially when the age gap is big - they’re nearly all the same, cold unlovable business woman discovers how to exist as a person through magical perfect child-man (I don’t like it in reverse much either). There some good ones though, and I like PMY so I’ll probably try it too.

@beffels I see where you're coming from! I'm partial to Noona romances done well, I recommend A Witch's Love with Park Seo-Joon and Uhm Jung-Hwa. A good reverse noona is Marriage Contract with Uee :)

A Witch’s Romance (Love) seemed to kick off several Nona kdramas that followed. I liked it very much.

I liked A Witch’s Love, there are definitely some good ones! My Lovely Sam Soon is another I really liked. It’s just a lot of the time it feels like they forgot they needed a story to go with the older woman/younger man dynamic.

@beffels Sunbae comes to mind with regard to a drama losing direction. Rowoon was cute for the first few episodes, but the plot quickly ran out, same with Temperature of Love. I want a good drama with great chemistry and excellent plot, please.

Agree about Marriage Contract - that drama punches well above its weight.

Thank you, beffels! This is why I shouldn't type late at night.

Apologies @kafiyah-bello! I thought you were 100% spot on, even if I clearly wasn't.

Oh no worries friend, lol. I think we are all just a little wary of this pairing, but Park Min Young is so great at chemistry.

I feel like PMY plays the same person in all her dramas. Her characters are interchangeable at this point.

I am not going to say PMY will make anyone forget Bae Doona or Kim Nam-Joo, and while I can see some overlap between her characters in Secretary Kim and Her Private Life with the one described here (squared away professionals), I think it an overstatement to comment that her characters are all the same. Her other drama roles (I am unaware of her film work) in the last ten years, such as A New Leaf, Healer, Queen for Seven Days and Weather Is Fine could not be more different.

Even worse for me cause even though Healer, Weather, and City Hunter are all different from her rom-coms, she still gives me the same vibe in all of them.

That's cause she chooses the same types of dramas over and over. It's always romance. I've never heard her take a role as a cop, for example, or do dark, thriller dramas. A switch in genres would be a breath of fresh air for her.

It may seem that way due to recency bias -- while all her projects have a romantic component (that is true of kdramas in general) her first rom-com was Secretary Kim.

I will probably check because I liked Ms. Temper and Nam Jung-ki.
(Though the weather setting makes me want to rewatch Jealousy Incarnate instead...)

Please let it be with Han Yeri when that happens. I love their pairing in Age of Youth.

But yeah, i hope he gets a lead role soon.

I totally agree, even when he showed up in Age of Youth 2 I was screaming!! I need more of them

Park Min-young and Yoon Park is the OTP ha ha ha. No I dont hear you..... 🙉
Make it happen drama Gods.

He's also a "genius", but I'm not sure if that is really necessary.

I like noona romances but Song Kang's charm doesn't work on me and there is Park Min Young and I love her... What a dilemma!

I really like Park Min Young but Song Kang despite being everywhere is still quite green. I wish Yoon Park was the ml instead as I think of the two he's the better actor but I guess he's not popular enough.

I'd love to see PMY with Lee Seung-gi. They have great chemistry in Busted!, and I think they'd be a fab OTP - and not necessarily a traditional romcom, either.

dang, Song Kang be taking over dramaland tho