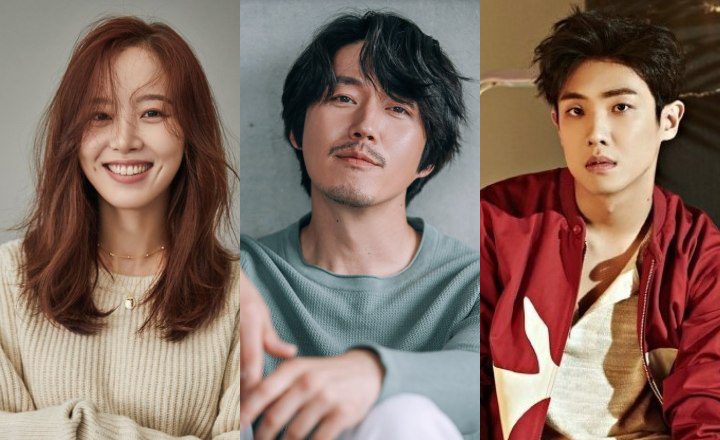 Kang Hanna (My Roommate Is a Gumiho) has been offered the female lead in KBS’ new sageuk drama, tentatively called Red Heart, and she is positively reviewing the offer. If she accepts, she would be acting opposite Lee Joon (Father is Strange) and Jang Hyuk (Tell Me What You Saw).

Red Heart will tell the story of a fictional Joseon-era crown prince turned king, Lee Tae (played by Lee Joon). Born the eldest son of the king, he gains the throne after a coup. Lee Tae dreams of absolute monarchy and becoming a more powerful ruler than his weak father had ever been.

The role Kang Hanna is considering is Yoo Jung, a woman whose free-spirited nature couldn’t be restricted, even by the strict Confucianism of that time. Lee Tae falls for her free-spirited nature and chooses her as his crown princess, which plunges her family into great danger. Caught in the middle of a power struggle, she must choose between her love for Lee Tae or her family’s plans for revenge.

Jang Hyuk will play Park Kye-won, a powerful political figure who played a major role in helping Lee Tae successfully instigating the rebellion. Though once allies, after Lee Tae takes the throne, Park Kye-won’s goal becomes turning the king into a “royal flower,” i.e. a decorative figurehead that he can control.

If Kang Hanna accepts this project will reunite Kang Hanna and Jang Hyuk; they previously worked together in the 2015 sageuk film Empire of Lust. I always love her in whatever role she plays so I’m very excited to hear that she’s already considering her next project, and in a lead role at that!

The drama will be written by Park Pil-joo (Shall We Live Together, First Love Again) and has yet to announce a director. Red Heart is expected to premiere in 2022.

Kang Hanna in a lead role- FINALLY. Its about time. The description of her character sounds like one which can fully employ her wit and humor. I hope she takes the role and that the writing is at least decent. Let us hope this show can also attract a decent director.

I admire Jang Hyuk and can see how he would be very effective as the antagonist in this drama.

Hopefully having the kings "fictional" might save them from the fate of Joseon Exorcist even if they make a mistake (??)

I'm not even a sageuk fan but I'm watching this because Kang Hanna finally has a lead role.

I like Jang Hyuk mainly in sageuk roles, he was so good in My Country!

I'm happy for Kang Hanna, she deserves a lead role!

Jang Hyuk and Lee Joon are two of my favorites. Jang Hyuk is always great in sageuks but this is Lee Joon's first, I believe. I hope the director is good.

Same... I'm excited for the premise and cast of both this and Red cuff sleeve (no holes in acting and non-fluff sageuks) but what's up with the writers being the handicap?? I want some good serious sageuks after what seems like forever but I'm more than wary about the scripts.

RED HEART will be a KBS 2 production. I wonder why it is getting plugged by JTBC:
https://news.jtbc.joins.com/article/article.aspx?news_id=NB12017873

At MDL there is no director listed. Writer Park seems to be in-house KBS with her/his last drama in 2018. I guess it is early days so as of now for me the best thing going for RH is that Jang Hyuk has committed to it and either he needs the money or he is confident about this project.

Judging Jang Hyuk’s project choice in these couple of years, he seems to be transitioning into a character actor, which is not a bad thing and adds longevity to his career.

Nonetheless, I do think he still has years of lead role credential in him. Look at Money Flower, it is totally a Jang Hyuk show - mesmerising with gravitas.

I did wonder for a bit what drama offers were coming his way after his supporting roles in both 'Wok of Love' and 'My Country'. He was the lead in 'Tell Me What You Saw' with Sooyoung last year which had pretty decent ratings for OCN, so all is well. He also gave OCN their highest ratings with 'Voice' which has gone on to have multiple seasons. The first season of 'Voice' only came out four years so that success coupled with the recent success of his last drama should have lead roles continuing to come his way. Love Jang Hyuk in sageuk and with Lee Joon cast and Kang Hanna hopefully on board, this drama is a can't miss for me. I loved Kang Hanna in 'My Roommate Is a Gumiho' and really hope she gets the role. Lee Joon as the male lead just puts a smile on my face. I've been watching his career in film, music, and television since his role as the younger version of Rain's character in the Hollywood movie 'Ninja Assassin'.

Kang Hanna is FINALLY a female lead. I’ve waited so long for this. Maybe there’s some justice in dramaland after all.

Please be good show, I love my girl Kang Hanna and I really need her to lead a good project

Yay Finally!!!!! I love Kang Hanna! I'm so glad that she got her lead role!

She was so good in Empire of Lust. Will be looking forward to this, glad that she's finally given a lead role.

Solid casts! I'm not a fan of Sageuk drama but with these amazing casts, I'll give it a try. Jang Hyuk as a mastermind is such an interesting role. Also Lee Joon in Sageuk? I know he's a really good and versatile actor and I hope he did well in this drama.