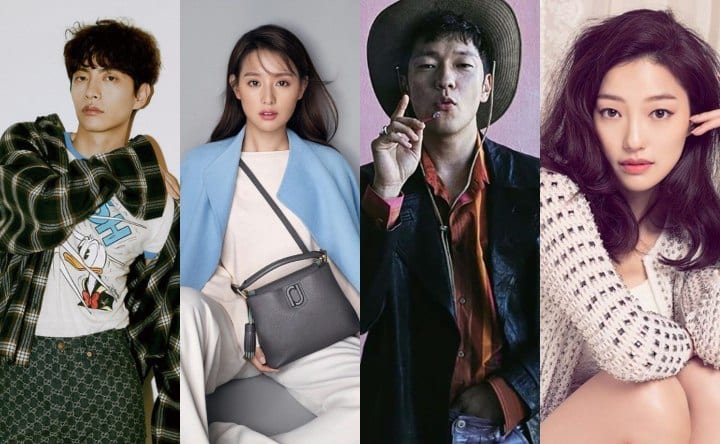 JTBC’s upcoming drama My Liberation Diary has confirmed its main cast with Lee Min-ki (Oh! Master), Kim Ji-won (Lovestruck in the City), Sohn Seok-gu (Designated Survivor: 60 Days), and Lee El (When the Devil Calls Your Name) in the lead roles. The story is a tale of three siblings who want to escape their suffocating lives and a mysterious stranger.

Lee Min-ki will be playing the role of the second-oldest sibling, Yeom Chang-hee. He’s living life without any ambitions or dreams and is often ignored by the rest of his family. He had once hoped to break free from the sidelines, but his desire for a more exciting life didn’t quite pan out. He speaks in an uncomplicated manner and everything that he states is oddly logical, so no matter what he says it’s hard to get mad at him.

Kim Ji-won will take on the role of Yeom Mi-jung, the youngest child in the family who wants to be liberated from her tedious, mundane life. Being extremely introverted and timid, she has lived her entire life feeling completely alone and unfulfilled. She has a friendly smile which can suddenly turn cold.

Sohn Seok-gu will play the mysterious, charming Mr. Gu who appears in their small village, a place that no one ever comes to. Having lost his way in life and feeling empty, he exudes a strong smell of misfortune and is constantly drunk. But one day, Yeom Mi-jung suddenly approaches him.

Lastly, Lee El will play Yeom Ki-jung, the eldest child of the family with a fiery personality. Having spent her whole youth working and commuting to Seoul everyday, she is unhappy with her life and is desperate to find love.

The drama will reunite Lee Min-ki and Kim Ji-won who previously appeared in the film Detective K: Secret of the Living Dead and Lee El and Sohn Seok-gu who starred together in the drama Matrimonial Chaos.

Directed by Kim Seok-yoon (Law School, The Light in Your Eyes) and written by Park Hae-young (My Ajusshi, Oh Hae-young Again), My Liberation Diary is set to air in 2022.

I've been waiting for this confirmation for SIX MONTHS now. It seems like as dramas are allowing more time to film due to the new labor laws, productions are waiting until right around the time filming starts to make official confirmations.

I'm one of the world's biggest My Ajusshi fans (self-proclaimed) and have been waiting with bated breath for Park Hae-young's next drama. The fact that her script is going to be paired with such a great director and cast is honestly giving me goosebumps. I don't want to get my expectations too high but GOD I'm excited.

I've been a big fan of PD Kim Seok-yoon since I watched and loved This Week My Wife Will Have an Affair, and my love was cemented with Law School. The show had a bit of a rough start with its editing but really settled into a nice groove after a few episodes. He really chooses some interesting scripts.

I've loved Lee El from the minute I saw her as Jamie in Liar Game. She stole the show with a performance I'll never forget. Sohn Seok-gu was absolutely terrifying and vile in Mother, but terrifically so, and his other projects are high on my list of things to watch. It's no secret that I'm a big fan of Lee Min-ki's work, and as much as I love his zany romcoms (let's forget the last couple existed) I'm super excited to see him back in what seems like a more dramatic role after he was so so great in The Lies Within. Kim Ji-won will always be my Choi Ae-ra and I was one of the few who really related to her character in Lovestruck in the City despite not loving the drama as a whole. I can't wait to see her in what sounds like another relatable role.

So, yeah, you could say I'm a little bit excited for this.

Check Son Seok-koo gu in sense8, he's so hot and charismatic in it, his chemistry with Bae Donna is bomb.

I loved Kim ji won in lovestruck in the city and the drama, I found her character (unpopular opinion) more relatable than choi aera. But yh love that's she's not playing it safe by doing a romcom.

@mindy Just wanted to say a quick thank you for finally explaining why productions these days are taking such a long time to film compared to before. (Monthly Magazine Home took ~9 months to complete filming when a 16 ep series usually only took 3 months!) I didn't realize new labor laws had been passed & just assumed it was due to Covid and productions trying to spread out scheduling to avoid having too many staff and actors congregating together at one time.

No wonder some stars aren't confirmed to be in a certain drama until sometimes like a month after they've even started filming! They've also seemed to have gotten a lot stricter in not allowing actors to post pictures of their characters or sets on their social media whilst filming (to the dismay of fans). Oh how the times have changed...

Actually these days, all 16-ep dramas take up to 6 months for filming. But, JTBC in particular seems to be pre-producing their dramas this year. Most of their drama which started airing in 2021 finished filming 2-3 months before their first airing date like Sisyphus, Law School, Undercover and even Monthly Magazine Home, not sure about the others though. Even their upcoming drama Fly high butterfly finished filming last month, but no airing date yet. And pretty sure even Reflection of you and Snowdrop will be done before they announce a date.
But there definitely must be many internal issues going on, and not just in JTBC. Because currently airing dramas like TVN's You are my spring and KBS's At a distance, spring is green, were supposed to be spring dramas and were supposed to air earlier around march-april during spring in Korea, but they are airing now in their summer season due to delays.

Thanks so much for the expanded explanation! I am pretty shocked at how many shows are pre-produced these days since I remember alot of dramas were scrambling & filming scenes the day right before they aired (crazy!). On the one hand, this is great for staff & actors since I'm assuming this means they don't have to work 16 hours/day; but on the other, it's odd that they don't release full confirmations on casts until like a week before they're airing & there's nary much publicity on the actual filming (I wouldn't have known that MMH was really actually filming unless I didn't follow some the cast's social media).

I wonder if the delay in release of dramas this year is due to a combination of factors like covid & the upcoming Olympics? I haven't come across an English article reporting on this year's drama delays/postponements/increased pre-productions so I've always been curious on this sudden departure from the norm in the Korean film industry....

You are not alone in the role of biggest self proclaimed fan of "my ajusshi".
For me, it is my number one in my list. Mother, by the way, is my number two.
Great acting! Great great...

This PD also did This week...? EXPECTATIONS!!!
I'm trying to keep them low but this is all around a really good team. But nope, I won't hold any, seriously.

Same, @mindy. I tried to keep my expectation low, but with this kind of team behind it and that intriguing character concept, my expectation is already sky high. Finally, I'm going to watch Lee Min-ki again. Because This Life is My First felt like decades ago already.

I am excited for Sohn Seok Gu.

Exciting stuff! My misters writer and a talented cast to boot. It's been a while since I enjoyed a slice of life type of show so 2022 needs to come sooner

I'm excited for Sohn Seok-gu and Lee El. I like that it's about three siblings and a mysterious stranger.

Great cast & writer , should be good

Omg.. The writer of "my ajusshi"!
That's a yes for me! And the director of "the light in my eyes" has proven to be also very excellent!
I also like that the drama is about siblings (again) and not "typical love story".
There is so much "meat" in family relationships, so many possibilities that writers don't explore, because they always focus in the relationship between a man and a woman! So I am happy with this writer.
Oh, I am excited! There is something to look forward in 2022! 🎆🎊🎉

Intriguing. I will check this out.

I love the casting and the story is interesting! I can already picture Sohn Seok-gu in a mysterious stranger! He always chooses interesting but weird roles :D

Personally, I prefer Oh Hae-young Again to My Mister.

Anticipation is an understatement for a drama with this writer, PD and cast (and who can resist SSG?)

What I find interesting are the three siblings’ descriptions:
- LMK’s character sounds like his role in I Really Really Like You;
- KJW seems reprising her timid girl role in What’s Up;
- LE is a OHY lookalike.

Ultimately, this is a dysfunctional family not dissimilar to the one co-penned by Park Hae-young in I Live in Cheongdamdong, one of my all time favourites.

How I wish someone would fully sub that show. It is so funny.

There's a certain number of actors that it just makes me happy to hear they've got another job and can put food on the table. Lee El is one of them. I don't know why.

My favorite writer is finally coming back. *is crying happy tears*
Even though it's still for next year. Still, it's good to havr an upcoming show to look forward to. And the cast is, as usual, perfect perfect perfect.

so obviously am watching this...

SO excited for this line up AND writer oh my god

Ohhhhhhh my oh my.... Am I dreaming? I just love everything about this show and I'm totally excited. I love the fact that Minki, Jiwon and Lee El are siblings. I'm a little bit tired of romantic comedy, so this is good for me.

oh, and the writer is amazing.

Sohn Seok-gu did a great job playing the philandering husband of Lee El in 'Matrimonial Chaos', a criminally underrrated series also starring Doona Bae and Cha Tae-hyun. That may have been the best Lee El role I've seen to date. It's on Viki but you'll have to do a word search to find it buried in the archives.

Usually I get excited over a drama because of the actors. This time, though, because of the writer. Her works My Ahjussi and Another Oh Hae Young is in my Top 10 dramas of all time. And I can be veeerrryy cranky dramafan.