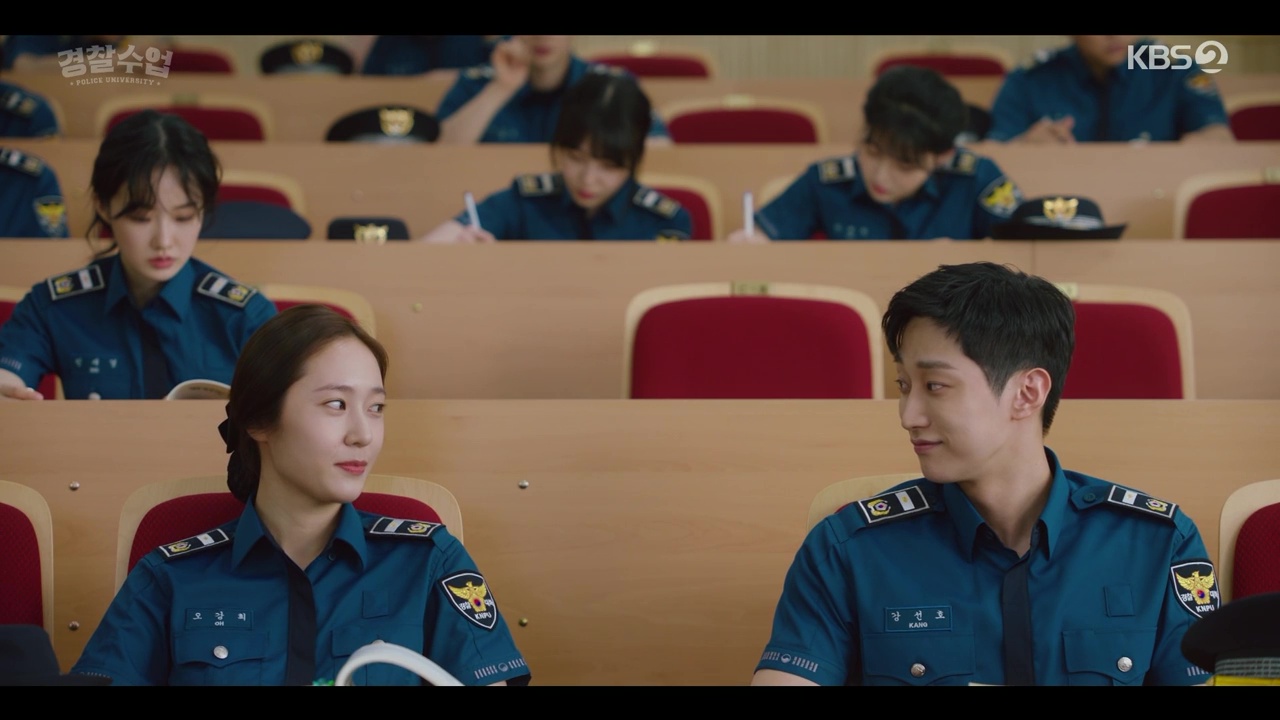 Full steam ahead! Instead of dragging out our reveals and making us wait for dynamics to shift, Police University delivers it all this week, and more. From the rigorous academic and physical challenges at the university, to the social challenges, love rivalries, and even the growing connection between the illegal gambling ring and the university, our plot is in full motion. 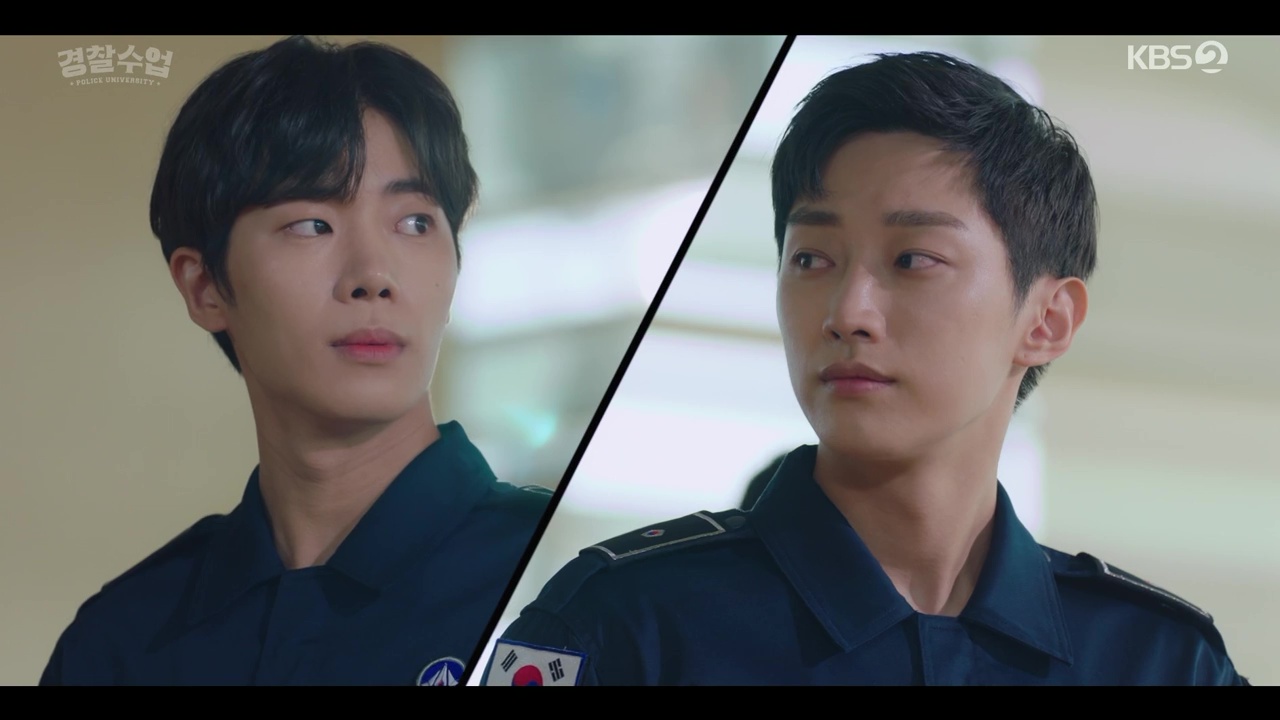 In our cliffhanger last week, Dong-man realized that Sun-ho is his hacker friend Yoon, and this is an important first step in changing his perception of Sun-ho. I really liked how the drama transitioned their relationship this week — just quick enough, and just organic enough, for it to be believable. Above all, it’s refreshing to have characters that are willing to change their perceptions and biases about a person when they really get to know them. And so we go from the bullying of last week, to a budding understanding — and even a possible partnership.

But first, Sun-ho and his fellow cadets have to get through the rest of their challenges, pass the screening process, and get officially accepted as cadets. This takes up most of Episode 3, and culminates in the strategic battle of a paintball war. 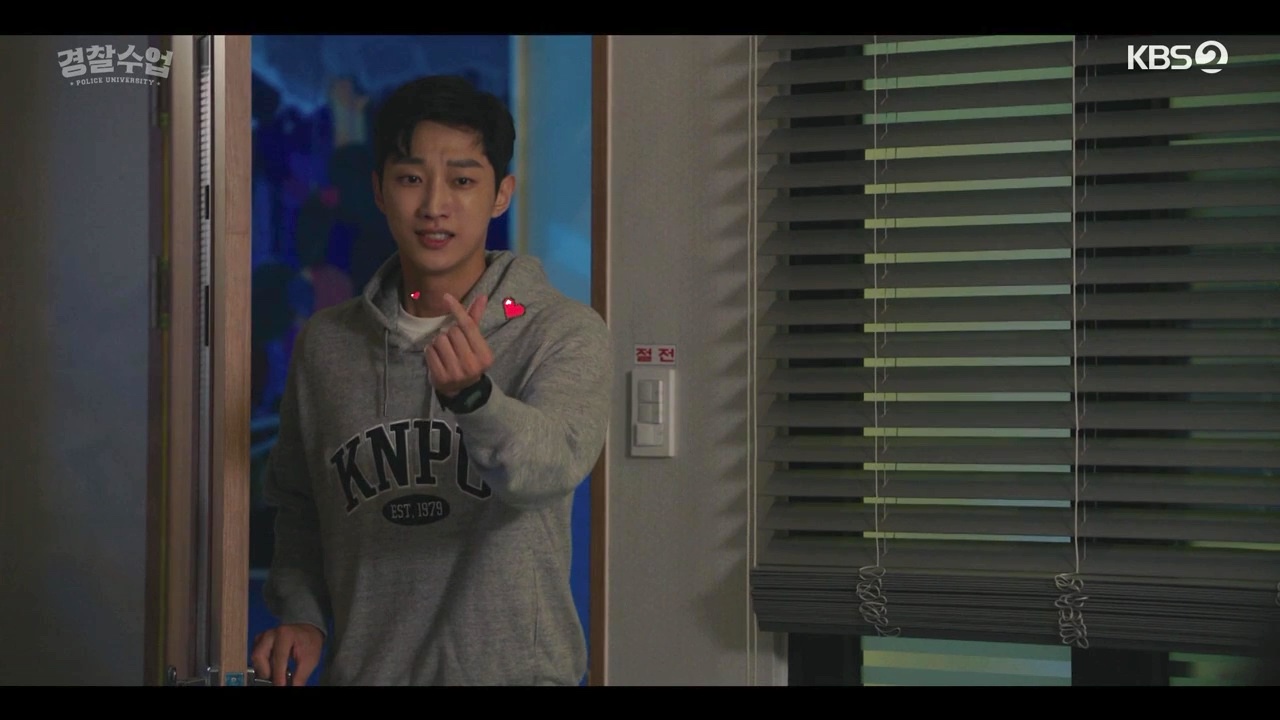 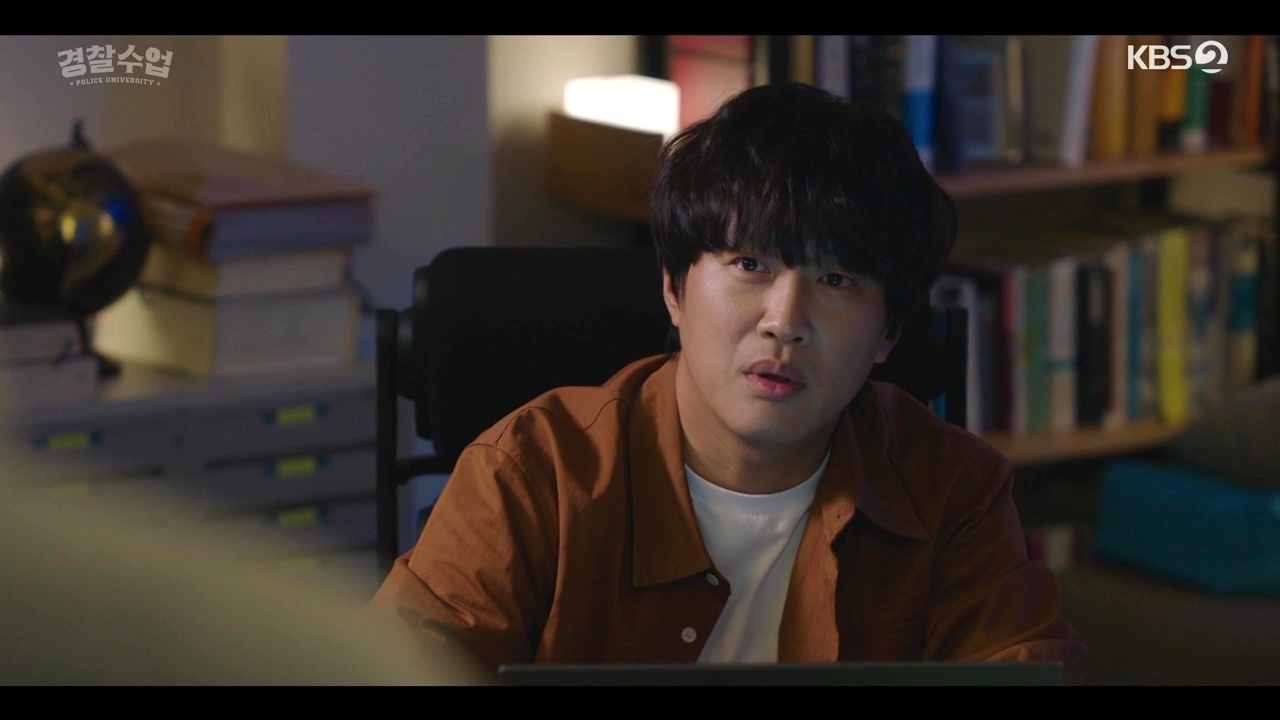 Kang-hee’s team is on top, so they pass the round. That leaves Min-kyu and Sun-ho’s team to face-off in the final round. There’s no doubt in anyone’s mind that Sun-ho’s team is the underdog — and the team members know it as well as anyone else. But it’s also Sun-ho’s chance to really show what he’s made of, and he continues to show the character and qualities that will make him a great officer down the line.

To start, he’s not afraid to ask for help, and he doesn’t let his ego get in the way. In fact, he all but begs Dong-man to help him strategize. However, this paintball battle is more of a psy-op than anything. The kids are thrown into the exercise a day ahead of schedule, and as expected, it’s full of conflicts and dire decision-making. Through it, we see Sun-ho’s earnestness and desire to excel — and so does Dong-man, thanks (in part) to their web chats. So, despite a serious injury during the exercise, and a lot of bungled plans, both teams are told that they passed. The exercise was less about being the winning team, and more about the lessons learned. 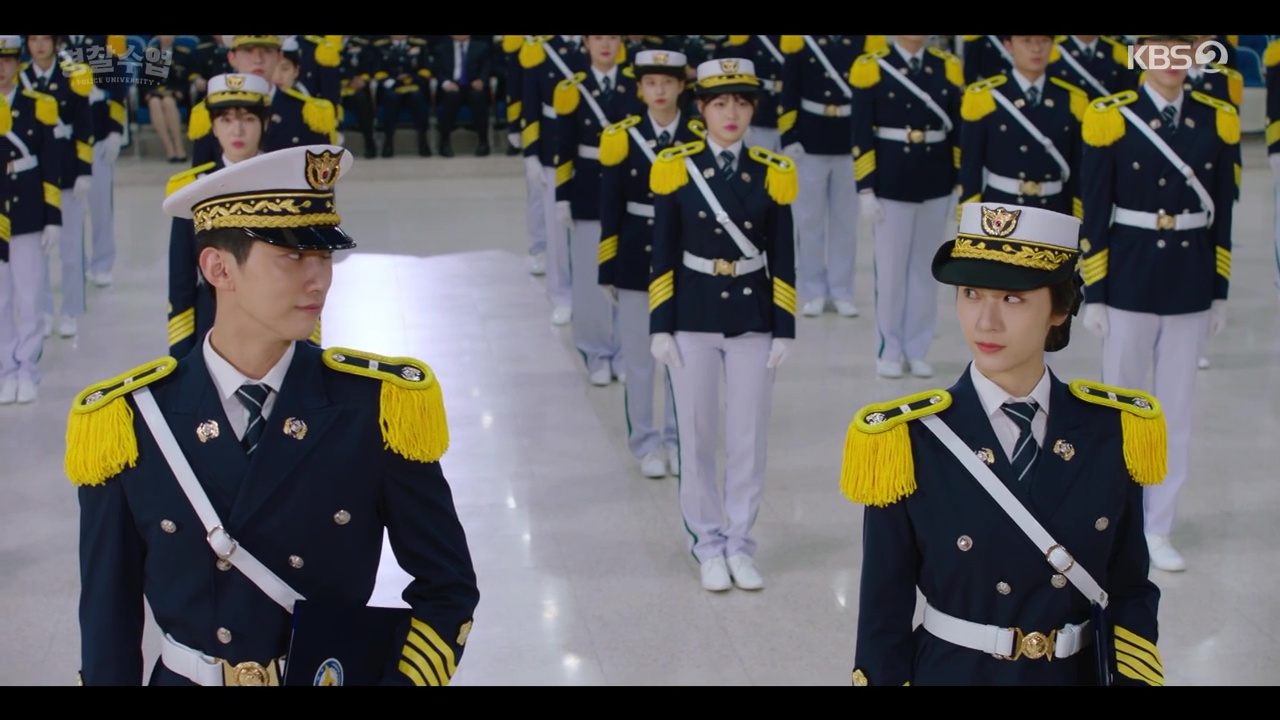 With that, our cadets get their official welcoming ceremony into the university, and it’s quite a cute scene. The cadets are in formation, looking spiffy, and at the end of their swearing in, the group turns around to bow and show respect to their parents in the audience. It’s quite touching, and Sun-ho’s dad is there beaming, but unfortunately this brings up a lot of drama for Kang-hee.

I’m already loving the relationship between Sun-ho and Kang-hee. Despite the fact that Sun-ho knows he’s not a great match when up against Min-kyu, he’s so adorable and confident. He bumps Min-kyu out of his way and approaches Kang-hee in his dirty, exhausted state, just after the paintball battle. He tells her outright: she was the reason he came to the police university. And as to the person he hinted at having a crush on, her guess was right: it was her. 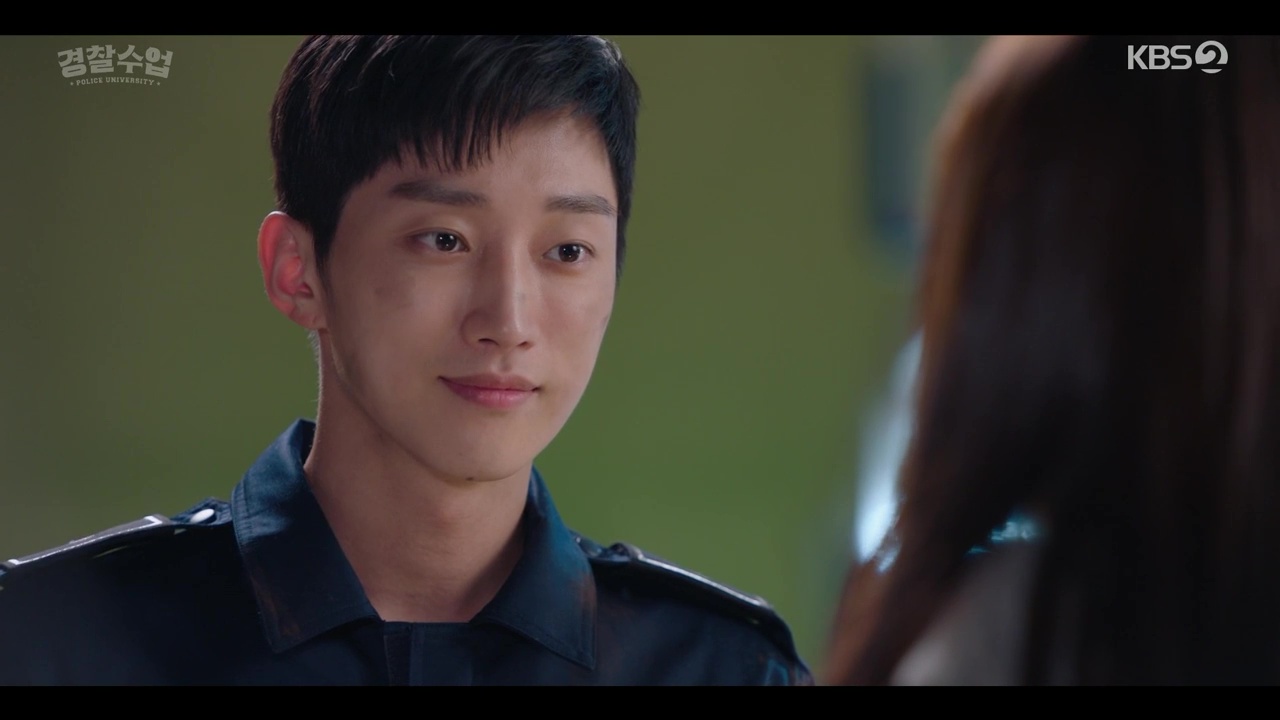 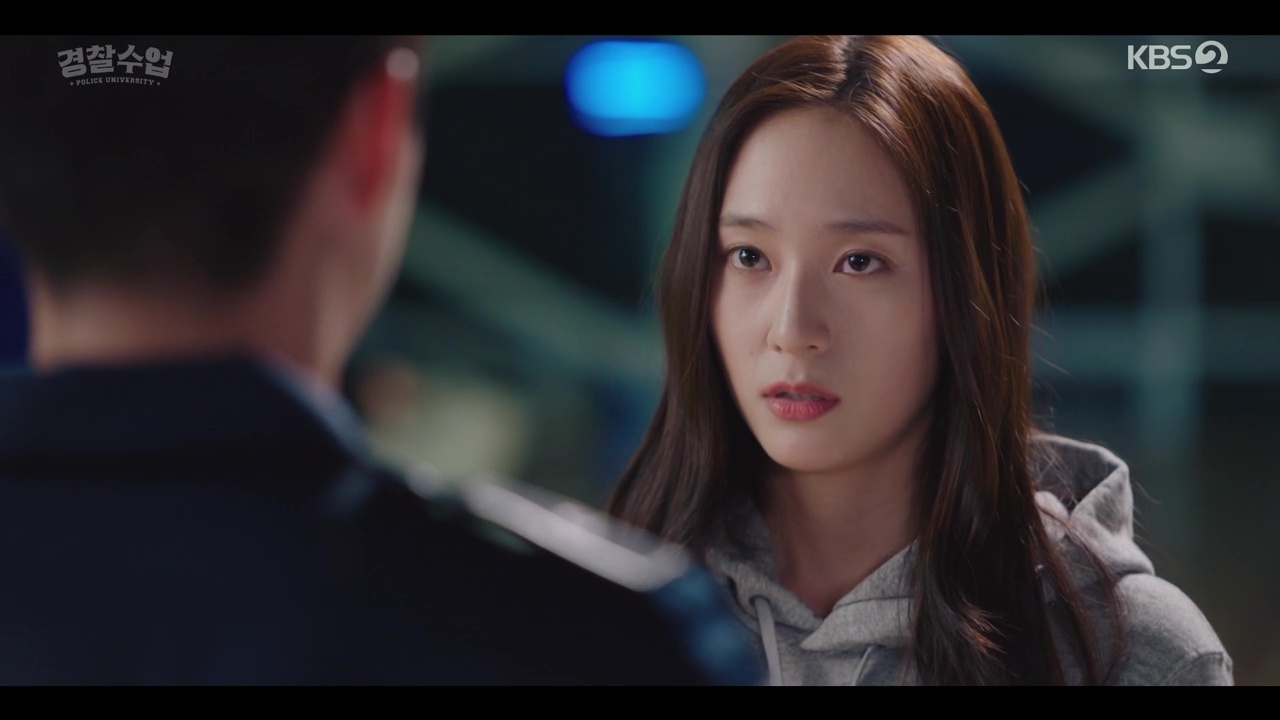 It’s quite early on for a confession, but I’m liking it — we see Sun-ho’s confidence under pressure (and competition), and we also get to enjoy their relationship as it unfolds. With Sun-ho’s confession out in the open, things actually stay quite friendly between them. There are many (adorable!) shared glances and cuteness, but there’s also emotional support. Sun-ho, how did you learn this so fast?!

When someone at school posts a video and reveals the fact that Kang-hee’s mother has multiple criminal convictions, the mob (in the shape of the cadets) comes after her. Almost everyone turns against her, saying the daughter of a criminal can’t become a cop. But Sun-ho’s around to cheer her on, encourage her — and also use his newfound detective skills to find out which student was responsible for posting the video. 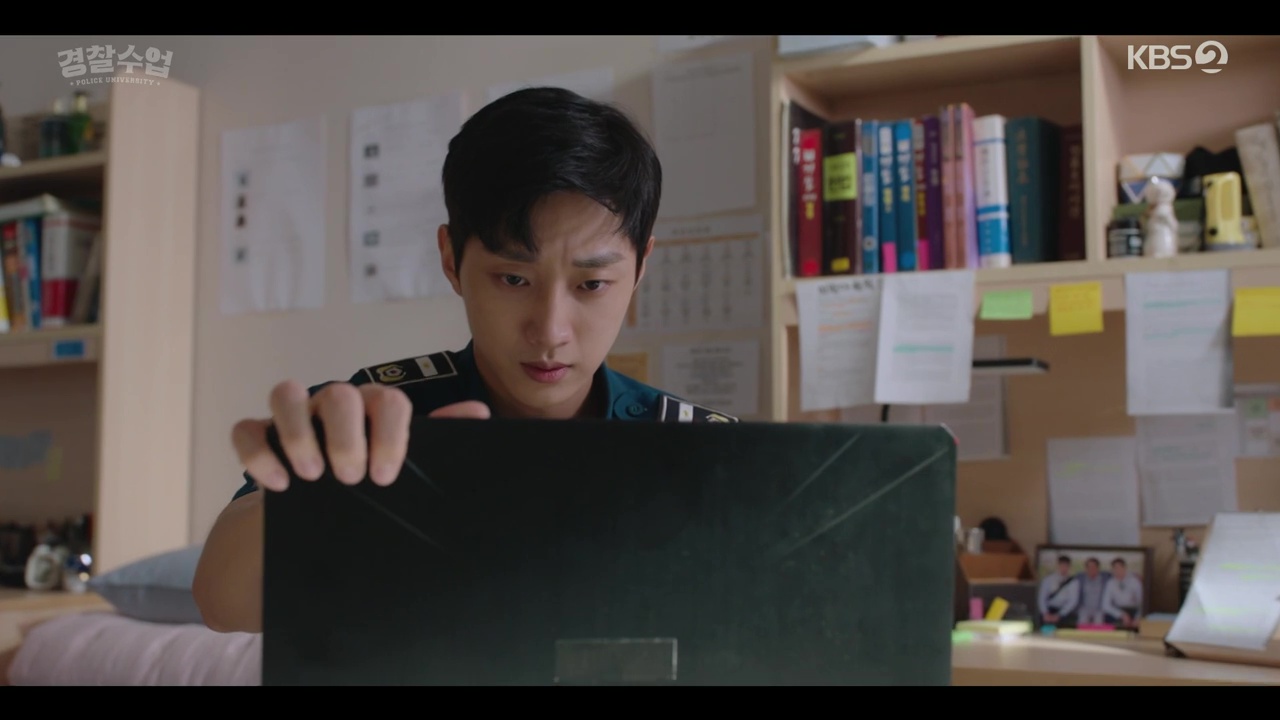 It’s at this point where we get a great overlap between Dong-man and Sun-ho, and get a sense of what they’ll learn from each other. Dong-man’s partner gets brutally attacked when he makes the brave decision to tell Dong-man the truth: the illegal gambling ring is on the move and they’re under deep cover at the police university. This sets hot-tempered Dong-man into a rage, and his principles go right out the window.

In his desperation, he confronts Sun-ho, calling him Yoon, and confirming that he is, indeed, Bird. At first Sun-ho is understandably confused that the hacker pal he thought was a peer (and friend) is actually a hot-headed detective-turned-professor — and he’s even more upset that Dong-man ask him to hack illegally once again, to help him solve the case. 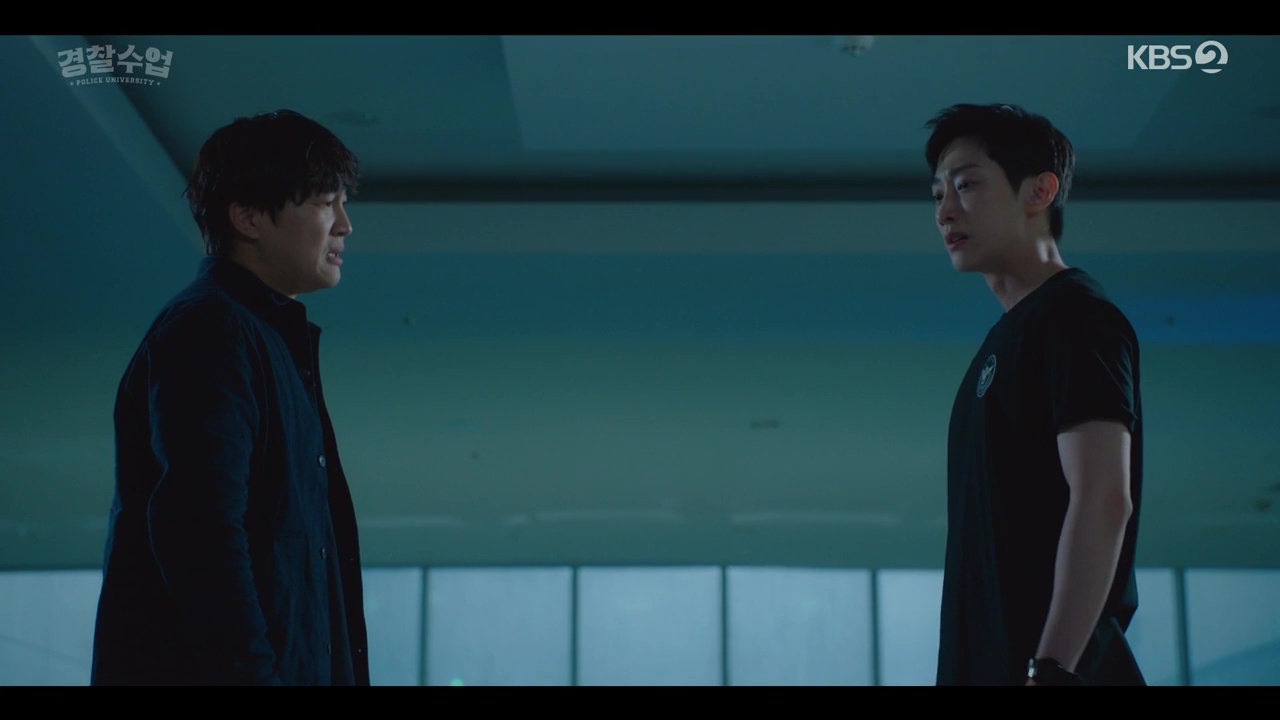 It’s a great moral dilemma the drama sets up here, as is the tension between the two characters and their world views. Dong-man might have acted high and mighty, but his loyalty to comrades and his determination to punish the gambling ring supersedes his respect for playing within the rules. On the other hand, Sun-ho is desperately trying to change his path, turn from his illegal hacking ways, and become a police officer that respects the rule of law.

This dynamic plays out between the two for much of Episode 4. Sun-ho accidentally tags along while Dong-man is in the heat of his investigation, and what he sees changes Sun-ho’s mind about Dong-man and also influences him a lot. He’s like a sponge! He reuses Dong-man’s sneaky interrogation tactic to find the student that posted the video about Kang-hee, and he also sees Dong-man’s drive to solve a case and punish the criminals in their midst. 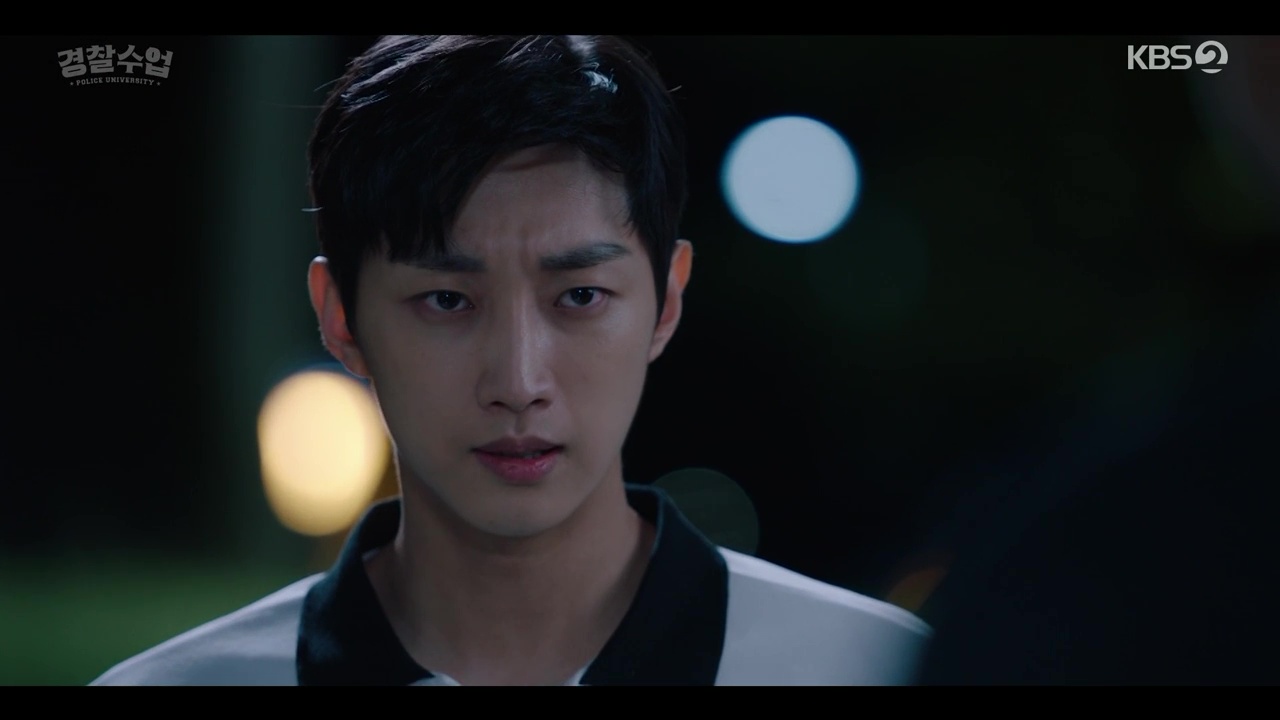 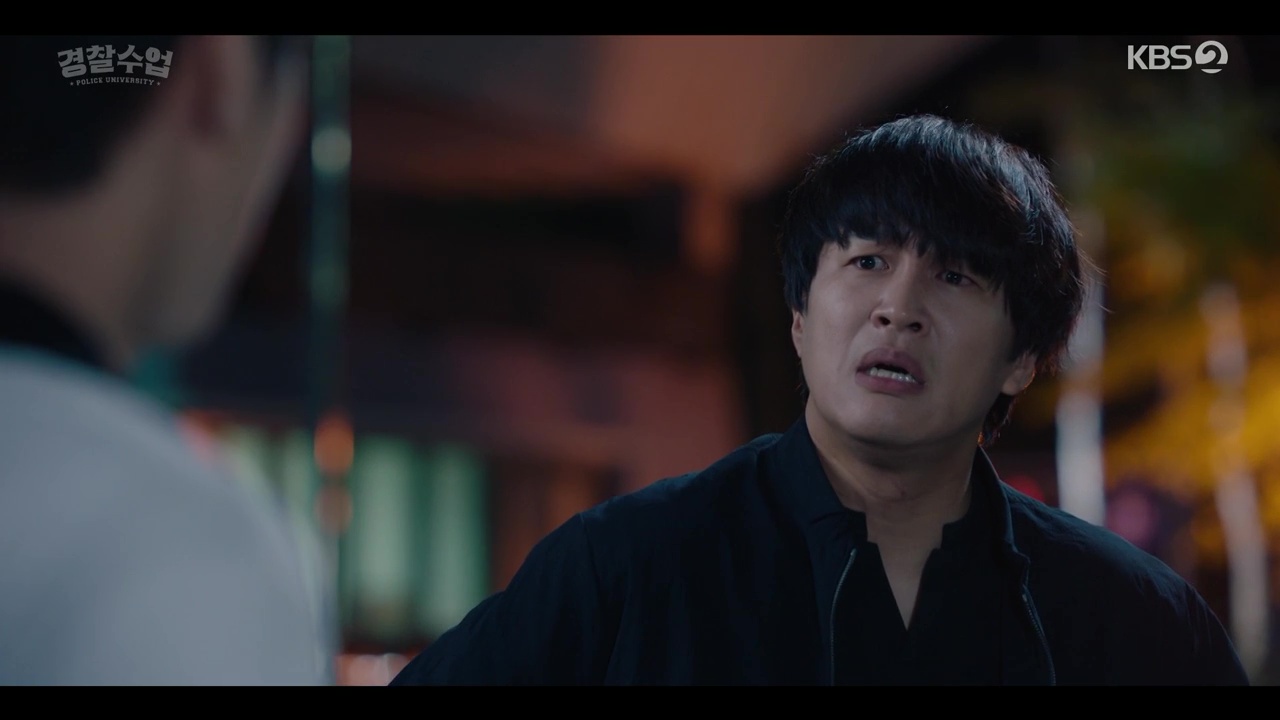 Without even realizing how it happens, the two organically go from at each other’s throats to being pretty communicative and understanding of the other. Dong-man comes to his senses and apologizes for asking Sun-ho to break the law again, and in our ending scene, Sun-ho asks Dong-man if he’ll let him help. He wants to bring down the gambling ring too, but he wants to do it the right way — not as the hacker Yoon, but as a police cadet.

It’s a great moment between them, because it’s got just the right amount of lightness, humor, and that buddy copy partnership we’ve been waiting for. But at the same time, there’s also enough character development, depth, and detail here to make the whole thing feel full and exciting. This is going to be the start of a beautiful friendship. 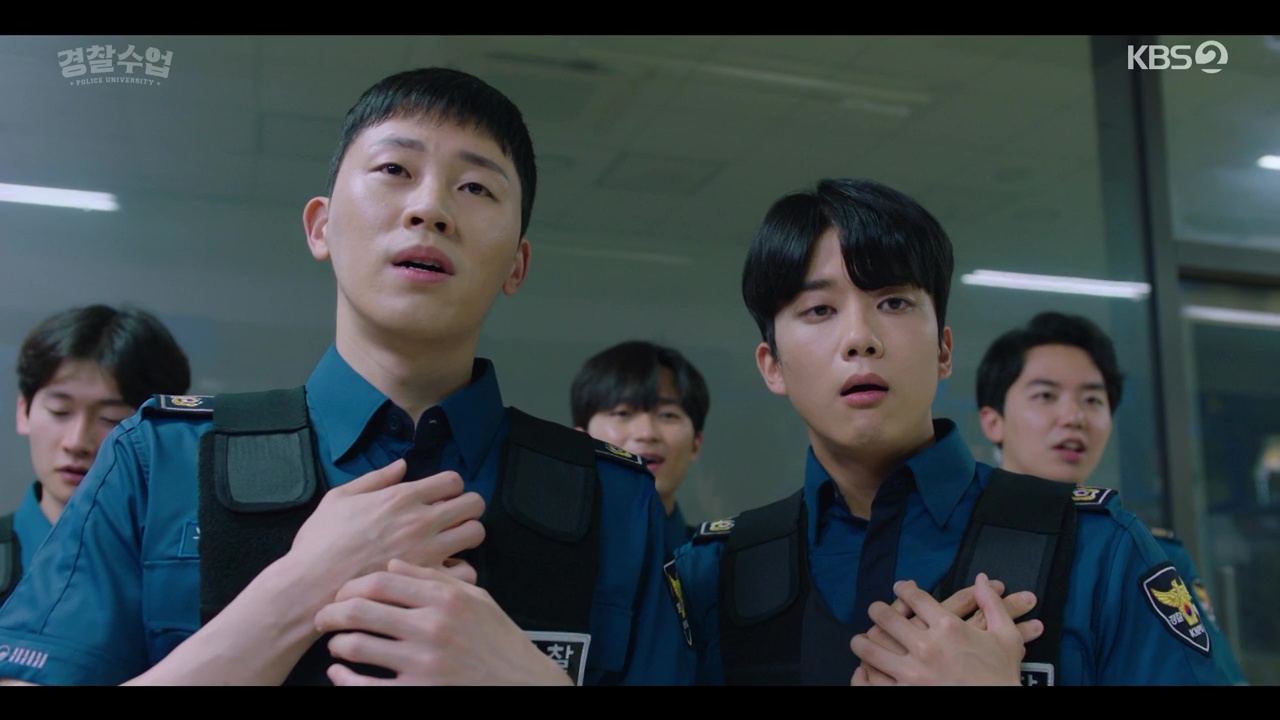 How is this show? i watched ep 1 and was not impressed

hang in there. it gets better and better

This show is so adorable, lol. I'm glad they are not at each other's throats that was getting tedious.

This week was much better than last week. Looking forward to the upcoming bromances and actual crime-solving!

Structurally this drama resembles INTO THE RING: The first 3 episodes are about the election or getting into the school and then the real story starts in episode 4.

I for one appreciate that the reveals happened so quickly- this will allow for a much more thorough drama. It is getting better as it goes along.

That makes sense! Into the Ring is one of my top favorite kdramas. It had a refreshing narrative and timing.
I get the same vibes from Police University, and it's quickly climbing to the top of my all-time faves list. It's young, fresh and has amazing cinematography.

This is my new favourite drama! It's nothing new but I like how refreshing it is, it's such a simple drama but I really appreciate the characters and dynamics within the academy.

I really wanted to like this show just because I’m a big fan of Cha Tae Hyun lol. But somehow Jinyoung is not engaging at all. Is it just me who thinks he’s not that good an actor 🤔

Barely managed to finish ep 3. May still give it another shot if I’m bored enough haha!