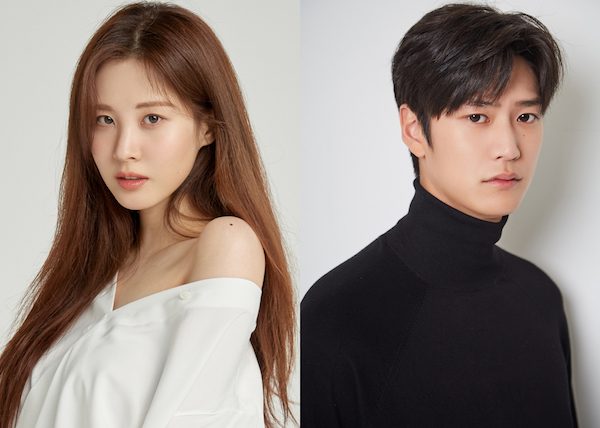 SNSD’s Seohyun (Private Lives) is embarking on a new project with rising star Na In-woo (At a Distance, Spring is Green). Based on a popular webtoon, this upcoming drama is a fantasy romance called Jinx Lovers. It’s about an unlucky, poor man who has accepted his ill fate, and a goddess with a cruel destiny who’s hidden away from the world by a chaebol family.

Seohyun plays the goddess who can tell a person’s future just by touching them. She’s a bit naive and idealistic because she grew up so isolated, locked in a room by the aforementioned chaebol family. One day, seven years ago, she escaped the room to explore the world, and there she met Na In-woo’s character. They spent a day together that seemed like a dream, and ever since, she’s wanted to be in the real world.

Na In-woo plays a fish peddler at the Seodong market whose streak of bad luck began after he met Seohyun seven years ago. He lost everything then, but when he meets her again, he begins to recover the memories of skills he once had.

Godhood must mean something different in Korean mythology than in the West if mortals with money can lock up a goddess. Unless the show refers to a demigod, in which case, I am just being a scold about semantics...

Is it me or Na In-woo look like Kenichi Matsuyama in the photography?

Please, for the love of God, don't let the series end in another 'Noble Idiocy' trope!

Given that it is based upon a webtoon there is at least some hope that we will be spared that.

I've never liked Seohyun, to me she is wearing the goody-good innocent mask. So fake. Gives me the creeps.

Funny because she dislikes that innocent idol image too. From the roles she took and the lyrics she wrote (for herself and SNSD), it's obvious that she tries her best to break free from that innocent image SM gave her lol

I have no idea what she's like in RL but I first saw her in the mini-drama Hello Dracula and she completely blew me away.

That she played a gay character made me think she was someone who made interesting choices in her acting career.

So, this sounds like a gender-reverse, *anti*-DAYS (doom at your service). Should I be worried? -_-

Looking forward to Seohyun. I enjoyed her performance in Private Lives.

I will try this one- it could be fun.

I'm going to give this a chance but only for Na In Woo. The guy seems to have decent acting skills. I haven't really seen much of Seohyun to know what make anything of her.