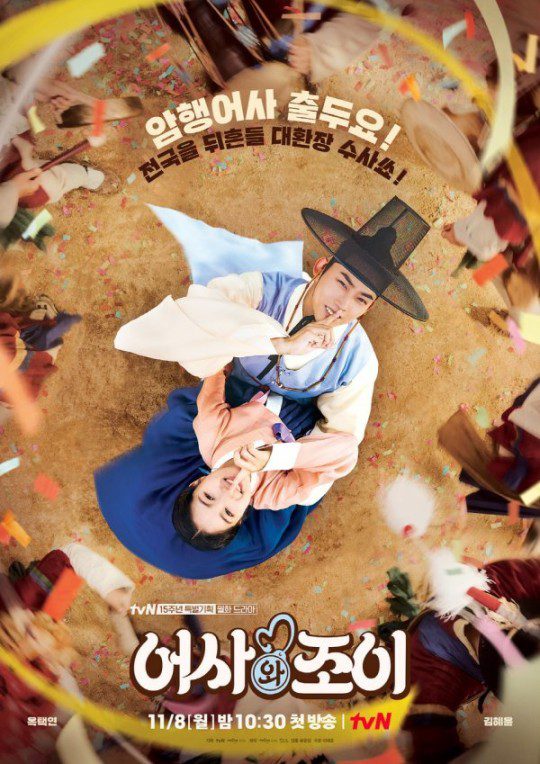 More promos have been released for tvN’s upcoming comedy sageuk Secret Royal Inspector and Joy, including a new poster and video teaser.

The drama stars Taecyeon (Vincenzo) as a reluctant government official whose true passion is food. He starts his shift on the dot and stays not a minute after he’s done, and he relishes every second of his breaks. Still, he was enjoying a peaceful life when all of sudden he somehow becomes appointed as the king’s secret inspector and his life turns upside down.

As he starts his new duties, he encounters the young divorcee Kim Hye-yoon (Extraordinary You). Despite the taint that divorce brings on her reputation, she is optimistic about her return to singledom and is determined to find happiness for herself in this new chapter of her life.

In the newly released poster, we see the two standing under a swirl of confetti and ribbons, and they put their finger to the lips asking the audience to keep their secret. The tagline reads: “Presenting the secret royal inspector! The investigative show that will shake up the whole the country!”

The teaser opens on Taecyeon looking impressive with his royal badge and we hear the king commanding him: “You will become the king’s eyes and ears, travel across the country, and eradicate corrupt officials.” But the king’s voice falters when Taecyeon suddenly falls over, and the camera follows the badge as it sails up into the sky. From behind Taecyeon, Kim Hye-yoon deftly catches it and confidently holds it up for the audience. This prompts the king to resume his speech: “I command you to eradicate corrupt officials!”

Min Jin-woong (Nobody Knows) and Park Kang-seob (Hell Is Other People), run up from behind to stand beside her and, together, the three of them smile at the camera. It cuts to a text screen that reads, “A crazy investigative show,” and it’s followed by a quick montage of Taecyeon and Kim Hye-yoon working together on each case and running into trouble. The final shot returns to Kim holding the badge and looking sheepish while Min and Park both avoid Taecyeon’s gaze. Scolding the trio, he says incredulously, “You dare hit the royal inspector?”

This cast lineup has a lot of potential and I am in the mood for a zany comedy though so I hope this one is a win! I must admit I chuckled when I saw Min Jin-woong and Park Kang-seob’s character names, Yook-chil and Gu-pal. They combine the Sino-Korean words used for numbers, so Yook-chil would mean Six-Seven, and Gu-pal is Eight-Nine.

I will watch, it looks amusing, but I am not seeing romance with these two, I am seeing sibling vibes, hmmm.

I really liked Taec in “Let’s Fight, Ghost” and the vibe he had with Kim So Hyun; I know it was romantic in the end but got there through a long period of very older-brother attitude that never completely went away. It sounds odd to say, but Taec does very well being natural and comfortable with actresses in a casual way, when other actor pairings with large age gaps have felt a little stiff. I’ve wondered before if it’s his American childhood sort of asserting itself, an easy lapse back into the kind of gender-neutral friendships he probably had a lot in middle school. Whatever it is, it does seem to work in that I don’t pick up any sort of lech vibes, just a sort of amused camaraderie.

I will watch it for Kim Hye-Yoon! She will be so spunky and funny!

I prefer when her hair are down, because her braid on the top of the head looks pretty fake :p

This looks sooooooo fun. I can't wait to see my favourite cute ears in action!!

November is the month of babes in hanbok, yeah!

Looking forward to some madcap comedy! I enjoyed the last secret royal inspector drama (though it started off rough) and hope for the same level of enjoyment!

This looks super fun! I hope that they keep up the comedic vibes all-throughout. Taecyeon is cute as always and I absolutely adore Kim Hye-yoon. Looking forward to this.

Between this and Red Sleeve Cuff, I’ll have a grand time fangirling.

I will be watching this one

Someday, I hope to see Inspector Clouseau in a kdrama.

Kim Hye Yoon is so cute!
If they stick to comedy and avoid cliched sageuk intrigue this could be very promising