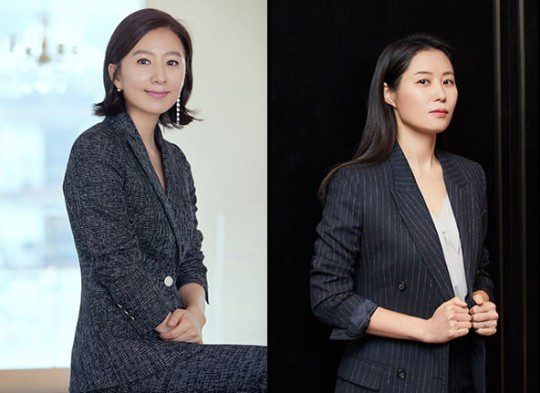 Netflix drama Queen Maker has just announced Kim Hee-ae (A Couple’s World) and Moon Sori (On the Verge of Insanity) as its leads.

Kim Hee-ae takes on the role of Hwang Do-hee. She’s well-known as an expert in branding and image-making, and she runs a tight ship as the head of strategic planning in a large conglomerate. Kim is highly respected for her deft handling of any crisis the company faces — but everyone is completely taken aback when she suddenly decides to help one of their opponents, Moon Sori.

Moon Sori takes on the role of human rights lawyer Oh Seung-sook, who specializes in labor laws. For years she has been a thorn in the side of large conglomerates, trying to bring them down for wrongful treatment of employees. Passionate about justice and protecting the oppressed, she will fight against all of society if she has to in order to create a better world. With this goal and determination, she joins the running to become Seoul’s next mayor.

Written by Moon Ji-young (tvN’s Who Are You) and directed by PD Oh Jin-seok (People With Flaws, My First, First Love), Queen Maker is currently in the planning stages and a release date has not yet been announced.

Oooh I'm in for Moon So-ri. Love her.

Kim Hee Ae is best in serious roles, the woman just has PRESENCE.

I'll watch anything with these two woman.

What a dream duo! Two very charismatic women in the same drama! I'm so ready :D

If this is not an adaptation of a HBO production starring Jessica Chastain and Viola Davis, it's simply because they forgot to make the latter, lol.

Timely. I just rewatched Midas, one of my faves from years ago, just to see Kim Hee-ae again & listen to her elegant, whispery voice. Moon So-ri has seemed sort of sour and unexciting to me in the two dramas I've seen her in (Life 2018 and Verge of Insanity) but maybe the two together will generate something.

If those two drama don’t excite you, try watching Moon So-ri in Life.

No way am I skipping a drama with these women as leads.

The writer and director don't sound terribly interesting, but if BOTH Kim Hee-ae and Moon So-ri have signed on for this, it must have something going for it.

Ditto. The writer-director duo don’t sound exciting but if these two queens pick this project, there’s no reason why we shouldn’t watch it.

Love the premise! Commenters' of the actresses involved sounds promising

This actresses are game! Definitely gonna tune to this one when it airs.

Moon So-ri gave a wonderful performance in VERGE which snuck up to be one of my favorite dramas of the year.
The description of her character in QUEEN MAKER is almost the reverse of the role she played in VERGE. In VERGE she was the bane of many a company employee many of which could not stand her guts.
The one thing that might give me pause from watching her new drama is the political angle in the plot. I am not crazy about overtly political dramas. INTO THE RING was an exception and I really enjoyed it.