Script reading for KBS’s fusion sageuk When Flowers Bloom, I Think of the Moon 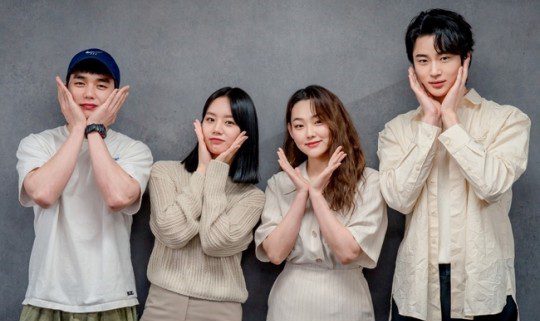 New stills have been released featuring the first script reading for KBS’s upcoming fusion sageuk When Flowers Bloom, I Think of the Moon. Present at the reading were lead actors Yoo Seung-ho (Memorist), Hyeri (My Roommate Is a Gumiho), Byun Woo-seok (Record of Youth), and Kang Mina (Hotel del Luna).

Set during a period in the Joseon dynasty when strict prohibition laws were enacted against alcohol, the action romance story follows the principled government inspector Yoo Seung-ho as he tries to enforce the ban. While chasing down alcohol-related illegal activity, however, he runs into alcohol brewer Hyeri and, naturally, complications arise.

Rounding out the main cast, Byun Woo-seok plays the troublemaker crown prince who likes to sneak out of the palace for drinks, and straight shooter Kang Mina is the only daughter of a well-to-do family on the lookout for a husband.

Supporting cast who were also present at the reading included Choi Won-young (Reflection of You), Jang Kwang (Dal-li and Gamjatang), Im Won-hee (Move to Heaven), Kim Ki-bang (Should We Kiss First), and Bae Yoo-ram (Taxi Driver) among others.

Written by Kim Joo-hee and directed by PD Hwang In-hyuk (Doctor Prisoner, The Gentlemen of Wolgyesu Tailor Shop), When Flowers Bloom, I Think of the Moon premieres on December 20. 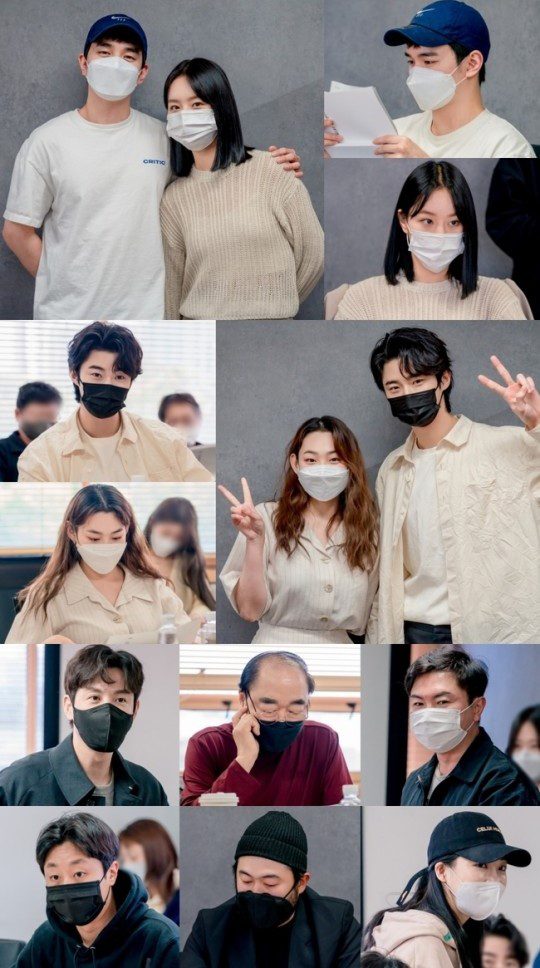 Except unlike Red Sky, I think this one is closer translation. RIP.

The “l” is added. Original is one of those pronoun less fragments. Have to see the context to know…

I kind of like it since it's symbolic/reference to the female lead's character.

RED SKY - Hong Chun Ki is the title of the novel and the name of the female protagonist. Her name is equivalent to "Red Sky Heaven."
http://www.hanbooks.com/hochkivv.html
RED CUFF SLEEVES - I believe this refers to the court maids' red sleeves (in the novel). The female lead is a court maid.

Ah! I did wonder what Hong Cheon Ki meant, as that was the Korean title of the show.
Still it makes me think the lovers should've been singular... Mr. Third Prince's SL love wasn't THAT much to write home about :P

These new writers are not confident enough to write a female-centric sageuk like the writers of old.
They have to change it to sell the pretty and tall new male leads.

An AI would be more original? If only because it doesn’t really know any better.

Clearly this is the work of that ultimate destroyer of creativity, the Creative Ideas Committee!

Reddest Moon of Moony Redness would about say it for 2021 for me.

How many dramas does LT refer to in this potential drama title? (5 points)

You can not imagine what image this brought forth.

At least they didn't try to wedge 'Nokdu' into the title.

When I begged the Drama Gods for a YSH Chrissy pressie, this is not what I had in mind. I'm being punished for not liking Subway or underwear in a can.

😂🤣🤣🤣, then we are all being punished. We stand with you in unity, we will not cave on dislike of can underwear and Subway.

Can’t speak for anyone else, but I stand in solidarity with you in dislike of subway and can underwear.

That title is a mouthful, Jesus.

I am…not as excited about this as I want to. Yoo Seung-ho back onscreen should make me overjoyed, but the rest of this cast doesn’t inspire confidence.

Perhaps it’s not too late to write in a time slip for Yoo Seung-ho’s character from Joseon in WHEN FLOWERS BLOOM to current time in WORK LATER, DRINK NOW. Talk about culture shock.

So, which Prohibition was leakier - the US one or the Joeson one?

Eunuch Jo himself from THE CROWNED CLOWN the wonderful Jang Gwang is part of the cast WHEN FLOWERS BLOOM. I hope he is written as a good guy like he is in D&G. Maybe he will play Hyeri’s kindly bootlegger father from whom she learned everything she knows about brewing.

I wonder if she finds a way to brew alcohol without rice? LOL
Drinking alcohol was forbidden because they needed the rice primarily to feed their families (during natural disasters) instead of using it to make alcohol.

*... don't make me want to go down an alcohol rabbit hole at 1/4 to midnight Kiara why!*
You can obviously brew alcohol without rice, it's just a matter of whether or not that was common or even a thing in Joseon and I need to KNOW now... dangit.

... Korean Black Raspberry wine, Korean Plum wine, cherry, multiple other kinds of fruit wines, plus the distillation process of soju, (of which the traditional kind goes back to at least the Mongol invasions if not Silla), also uses wheat, which you can just make alcohol out of itself... I'll come back to this tomorrow because really it's... now 11:56 but now I want to see the making of fruit wine and soju in a sageuk why am I like this...

(... what I mean by that is, in the same way I wanted Red Sky to be actually just a Korean Traditional Painting documentary, with heavy emphasis on Dancheong, I want to see a very aesthetic and well shot exploration of Ancient Korean Alcohol making processes and chemistry, with specific emphasis in fruit wine and soju... and we do not know what kind kf alcohol our FL makes here yet as the description just says "brewer" ...)

Probably not common in Joseon as the fermented rice-based alcohol.
I'm guessing this law was enforced because of a drought so that would impact rice, wheat, fruit production also?
What do you think?

Probably not as common for sure, no, but fruit wines have been around since Goryeo at least.
Along with wanting to know when this drama is set, I am struggling to find more information on the Joseon Alcohol Prohibition laws themselves. I found this site: http://www.beksejuusa.com/HistoryOfKoreanWine -
that says the Prohibition was enacted for ALL of Joseon? Do you have any farther reading on this at all?
bokbunja-ju- made from Korean Black raspberries- would be possible to make from foraging alone perhaps, but a drought-based famine would make even that hard. I have no idea if Rubus coreanus was grown as a crop in Joseon lol. Or what was for that matter, in terms of fruit. *more rabbit holes to go down.*

Sic,
I wish I were interested enough in this show to do more. BOSSAM at least was inspiring and worth the brain cells despite having issues with it towards the end.
I miss our wise and adventurous @pakalanapikake. She would be into this, no matter what.

Anyway, I would bet on the fruit wine being brewed or through trade as far back as the three kingdoms, Shilla especially.
Seorabeol, Shilla's capital city, has been the cosmopolitan city of that era to a lesser degree than Chang'an.
(IIRC, the young Deok Man had some Arab friends in QSD).

I know... honestly I'm impressed that I managed to go this far off a script reading post alone... since honestly the drama doesn't interest me THAT much either pfft.

Seorabeol was the 4th largest city in the world at its peak! So undoubtedly! They were trading as far as the Byzantine Empire, if not farther.
(Sort of related? I also read in my rabbiting, that they learnt the distillation process for Soju specifically, off the Mongols who got it from the Arabs.)

I read some while watching BOSSAM. It was inspired by the drinking poem at the gibang (eps 1).

I'm interested in the ingredients and which alcohol was easier and cheaper to brew since our Joseon candy girl is poor.

I haven't done much reading on the subject but will try later.

Looks like traditional Korean Rice Wines and Soju are made using a starter called nuruk- a cake of wheat, barley, mung beans or rice, wheat being the most common, which is left to ferment and grow mold, enzymes, yeast and bacteria, in a warm space (the ondol room) for several weeks. This is then used as the starter for the alcohol process by adding it to rice and water.
The enzymes in the starter turn the rice starch into sugar, then the sugar is consumed by the yeast, which produces the alcohol (short version.)

I don't know which would be cheaper or easier to brew, although I did read that traditionally women were the alcohol brewers in general. I feel like knowing when this drama is supposed to be set would help a lot, but it might just be "Vague General Joseon" (honestly, so annoying. The Joseon Dynasty lasted 500 years.) and we'll have to figure it out through inference and other means.

Well, it sounds like the inspector is a country pumpkin. The only king who would give talented lowborn and outcasts a position in his government was Sejong. He also ordered alcohol prohibitions during natural disasters.

They are so vague. This could also be Taejong's era who first implemented the alcohol law or any king since it's not an authentic sageuk.

Kang Mina and BYS have worked together a few times. hmm are they dating? lol.. just kidding but yeah Kang Mina always works with super hot men.. I swear she saved a nation in her past life

What Yoo Seung-Ho did in his past life to deserve that? In his last sageuk, the writer messed up the story, in this one he is surrounded by Hyeri who is still very bad at acting, Byun Woo-Seok who is pretty forgetable and Kang Mina who is not bad.

8 Sera is back 😋 but forgot the old account's password🙄

So many sageuks with famous sageuk child actors this year but the only one I was able to finish was Bossam Steal The Fate.

Hi Sera. WB.👋
That happened to me too, so I made a new account without the capital letter. 😆

Sera!!!! Oh my gosh. Hope you either remember the password or rejoin us on a diff account!

Seeing YSH in a normal role ( without any superpower or special ability) is not normal at all..hehe. I think the cast combination is a bit.................Don't know what to say, Speechless.

Somehow I get the feeling that Hyeri’s character will be another version of Deoksun (R88], this time of Joseon era. Just like Her character in gumiho as Deoksun in college.

I ill check this one out- but am a bit skeptical.