Lee Dong-wook, Wie Ha-joon tussle in the shower for Bad and Crazy

The teaser begins with Lee Dong-wook relaxing at the sauna, but suddenly, someone in a helmet (Wie Ha-joon) comes in and begins to beat him up. As the teaser continues, the two are mixed up together in ensuing events, and Lee Dong-wook always seems to be on the short end of things. He’s kicked by Wie Ha-joon in an elevator, and their motorcycle ride ends up with multiple head bumps for Lee Dong-wook. He finally asks who Wie Ha-joon is, and he replies that he’s a hero. Lee Dong-wook, clearly thinking that this guy is out of his mind, reacts badly.

We then get our first glimpse of Cha Hak-yeon (Secret Royal Inspector and Joy), who plays the infinitely good and warm-hearted rookie cop on the team. He’s confused because he had seen a blood-drenched hair in a certain bathroom earlier, but now it’s gone.

As the teaser continues, Lee Dong-wook senses that something is awry, and this begins the true partnership between him and Wie Ha-joon. They follow clues, but at every step along the journey, they end up tussling with each other. Wie Ha-joon tells Lee Dong-wook: “Prove to me that I’m really crazy.”

We also get a few cuts of Han Ji-eun (The Witch’s Diner) in the teaser — she plays a fellow cop who can’t stand injustice. She also happens to be Lee Dong-wook’s character’s ex-girlfriend. The last scene shows the three of them busting free on a tanker truck, and it finally seems like they’ve achieved a balance of friendship and teamwork.

Friday-Saturday drama Bad and Crazy, brought to us from the team that did The Uncanny Counter, will begin airing on December 17. 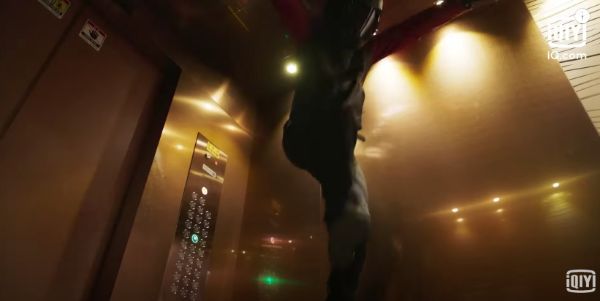 Saying I cannot wait for this drama is an understatement. Here for Wi Ha-joon playing a manic puppy. Also, what is it with Lee Dong-wook over the past few years? His glow-up has been A+, and he was already good-looking before. Whichever hair stylist is responsible for his look from Wook Talk to today deserves.

LJW is looking mighty fine in the sauna. Just wondering if he manages to keep that towel on while mixed up in the scuffle. 🙈

Great trailer. It looks like it's going to be so fun.

I wasn't going to watch this one because I'm very much not a Lee Dong-wook fan, but the trailer looks kind of fun. I might give it one episode.

So we need IQIYI now to see this? Sigh...

Oh that's too bad. It does look like it's worth the hassle with vpn and the headache inducing website. Fingerscrossed!

I'm not a LDW's fan and I dont watch Squid Game, but I really really love Wie ha-joon in this drama! Cant wait for ep. 2!