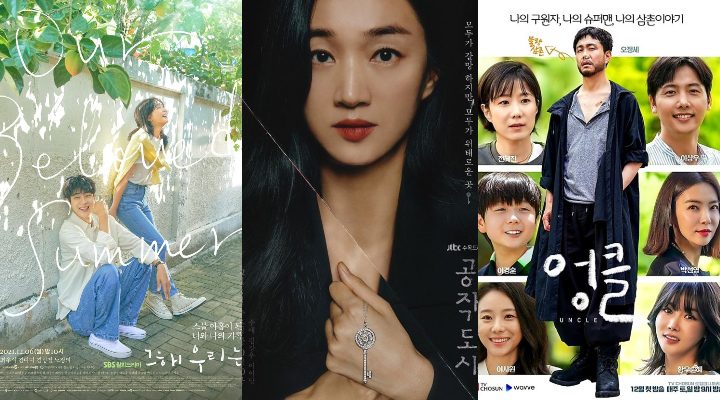 I never thought I’d say this amidst all the new dramas we’ve had the last few weeks, but I’m ready for some new ones! It feels like I’ve been waiting a long time for that drama that hits me with frying pan level infatuation — maybe it’ll be here this week? Headed our way is another summery romance, a psychological chaebol mystery drama, and an ensemble comedy that remakes yet another BBC drama. 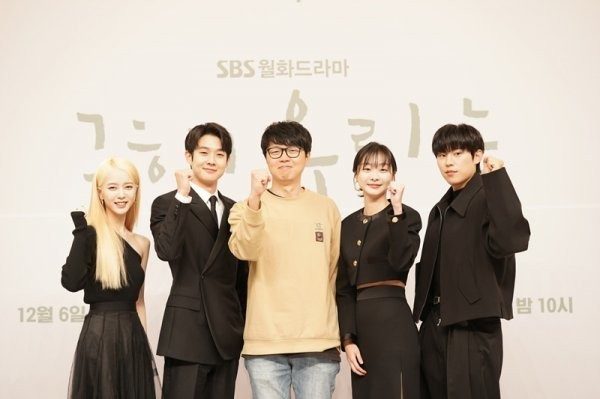 Reasons to watch: Choi Woo-shik is back in dramaland — and back starring with Kim Da-mi. In Our Beloved Summer, they play feuding high school classmates that develop a love-hate relationship. It sounds like they hate-date as teens, break up, and then find themselves crossing paths again as adults. Will history repeat itself? Methinks it shall. Dramas with two storylines are often fun, and I expect we’ll get to see a lot of antics from these two. It sounds cute enough, but will there be enough substance to hold the story together? I’m hoping so, because feuding only gets us so far. 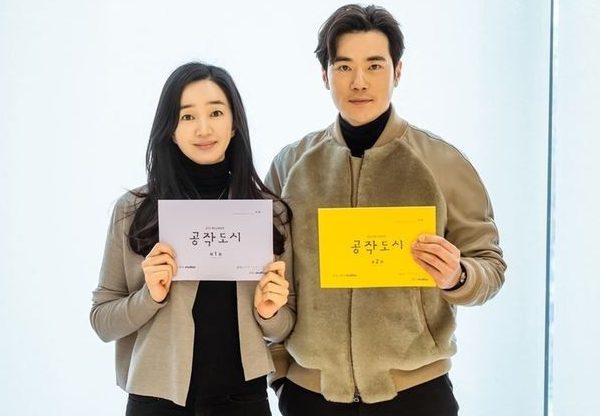 Reasons to watch: Another return to dramaland — this time Su-ae is back! I will admittedly watch anything she’s in, but my favorite from her filmography is Mask. So, the fact that she’s again playing in an intense and psychological chaebol story piques my interest. She leaves the love of her life to marry Kim Kang-woo and join his mega chaebol family as their second daughter-in-law, so there’s no shortage of drama from the start. The story will explore nifty things like greed, corruption, power, and ruthless ambition: the things that chaebol dramas are made of. Let’s hope this one is a sleeper hit, and not just a sleeper.

Reasons to watch: Mixed feelings on all the remakes we are seeing in dramaland lately, but I guess if it means a platform for Oh Jung-se, who can complain! In Uncle he plays the eponymous character — a lowlife musician who’s broken off contact with his family. When he takes in his young nephew, though, his life starts to change. It sounds heartwarming from here, but I’m also seeing a lot of sit-com references — at any rate, I expect this to take on a particularly nice K-drama tone. Maybe a nice drama for the holiday season?

Excited for Artificial City, tempered for Our Beloved Summer (I need a fluffy drama) and may watch Uncle.

Please be good, "Our Beloved Summer!" I love the cast and the hate-to-love trope is my catnip, so I really hope this one works.

"Uncle" doesn't sound like it would have enough story to fill 16 episodes, but maybe it's more complex than that summary indicates.

"Artificial City" is a drama I'd normally reject out of hand as I fear I'll hate every character, but maybe it'll surprise me.

You forgot Taejon Yi Bangwon on KBS1 starting on 11th Dec with 32 episodes.

This is the first traditional epic sageuk since 2016.

I'm excited for Our Beloved Summer and Uncle looks good too.

I had no idea Artificial City was premiering this week. Jtbc has been terrible about promotion and creating buzz this year, but I feel like this one really slipped through the cracks. I will probably try it if one of the legal streaming sites gets it.

I get the impression that Uncle will make me cry a lot...

I'm a little bit tired by rich people doing bad things... So not sure that I will test Articial City.

Enemies to lovers is my favorite, and Choi Woo-shik and Kim Da-mi have such great chemistry.

I'm ready to cry my eyes out in Uncle.

Artificial City is 20 episodes??? Why!! 20 episodes of makjang!!! Why is everyone trying hard for another Penthouse?? Let it go!!!

"King of tears, Yi Bang Won" premieres on KBS this weekend, too. And "Uncle" and "Show window" are missing from the currently airing drama list!

Bad news: I probably won't have time to start it until after Christmas :(.
Good news: By then I'll have a few episodes stacked up that I can binge!

I am looking forward to Artificial City just for the cast because Su-Ae and Kim Kang-woo can do melodrama right. My only hesitation here is because many of Kim Kang-woo's dramas tended to flop due to awful writing. I've been waiting forever for that miserable cycle to be broken for him. Here's to hoping this drama will be the one!