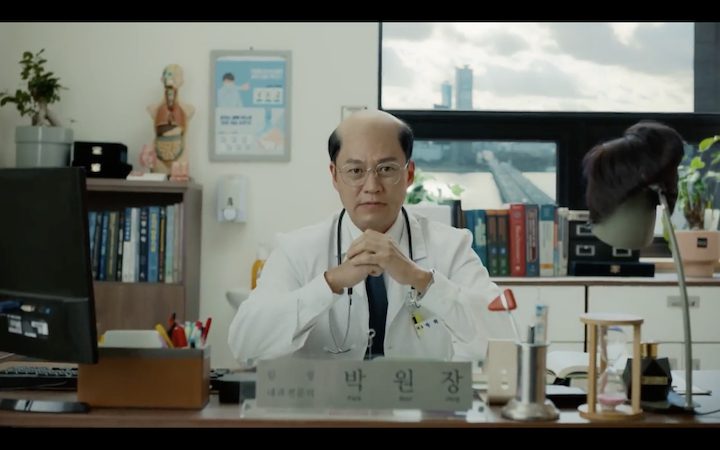 Well, this isn’t what I expected. More low budget sitcom than high production cable comedy, Dr. Park’s Clinic is about as quirky as I expected, while not delivering the laughs I was hoping for. Maybe it was just me? 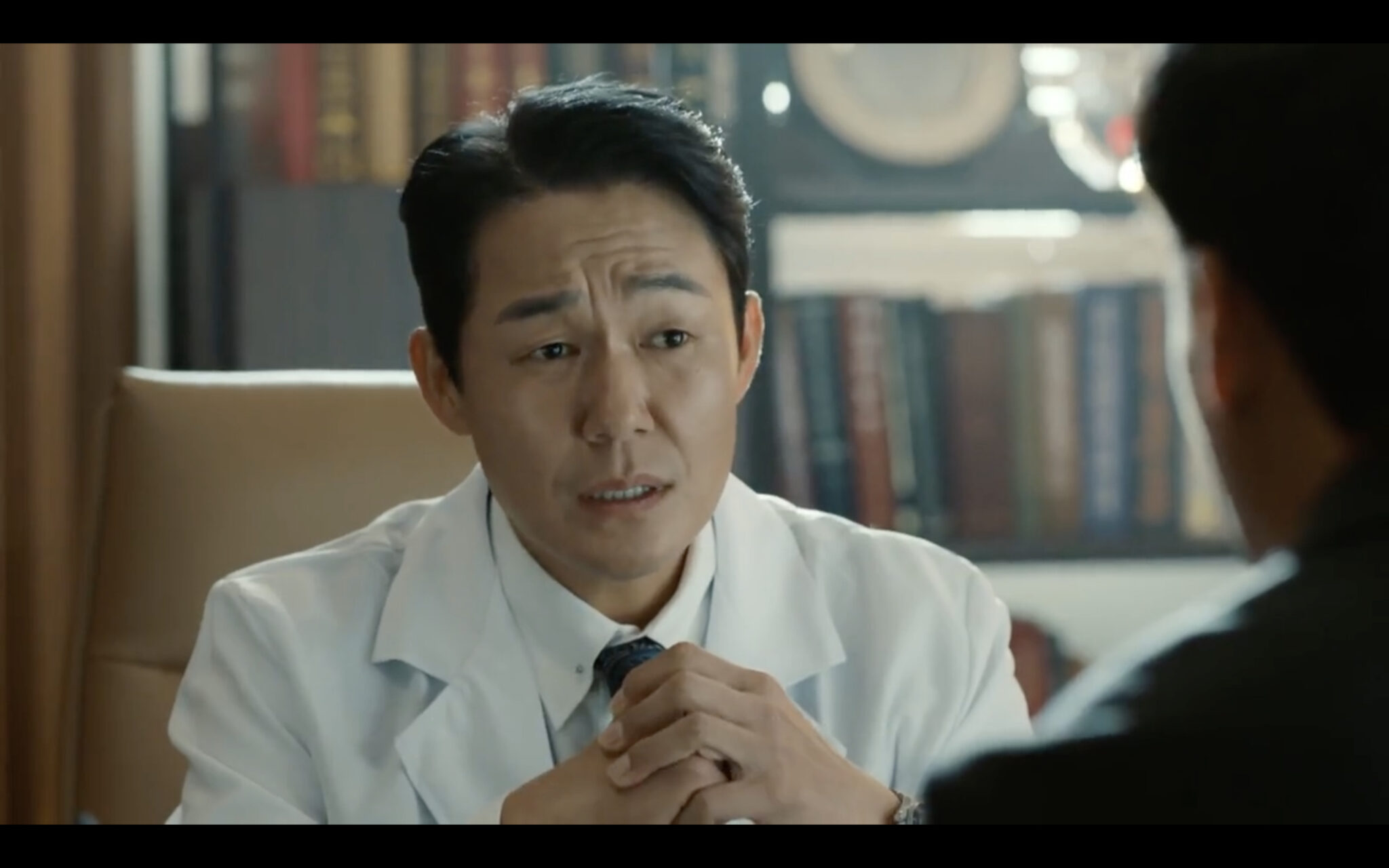 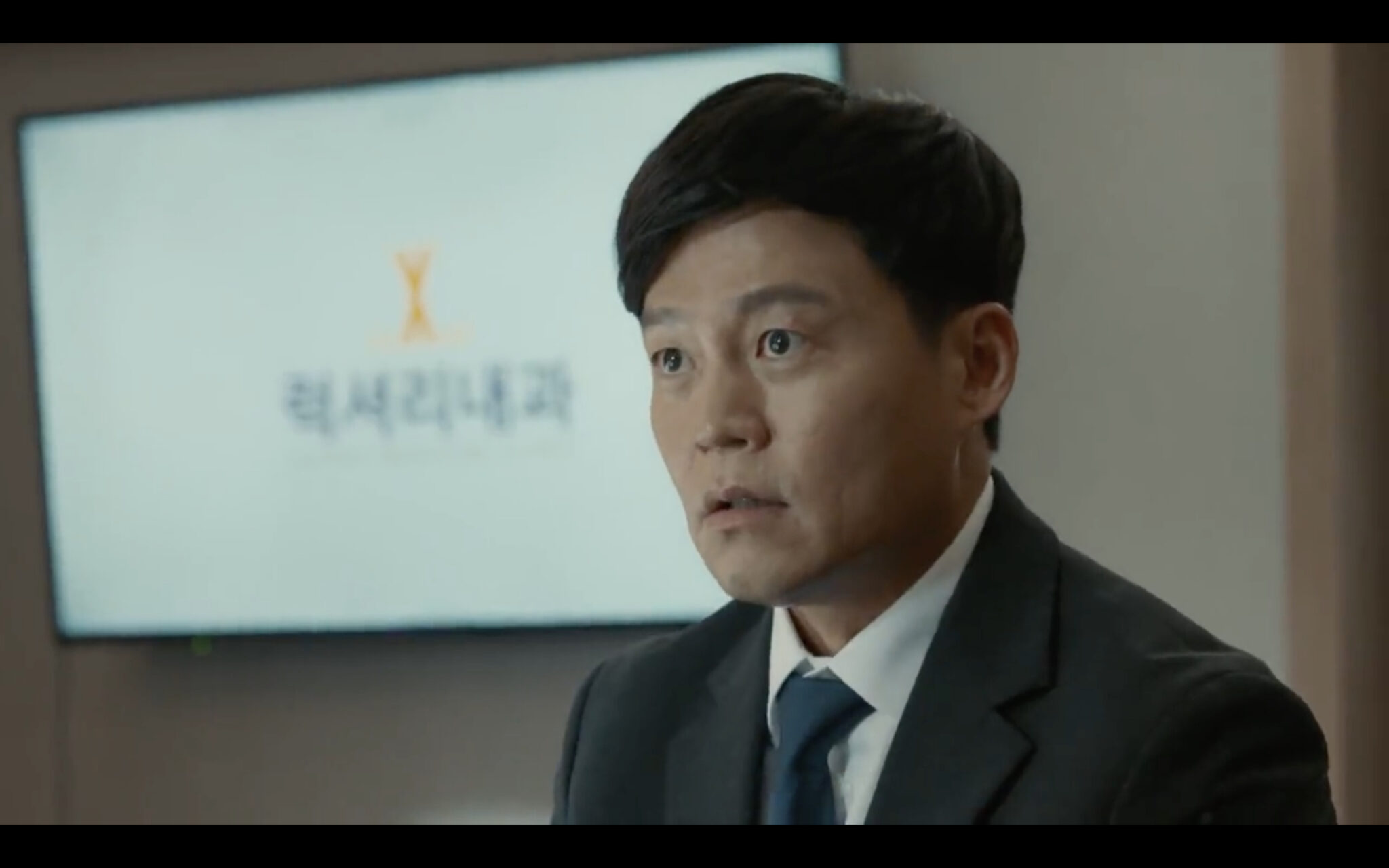 I really wanted to laugh, but I’ll admit right off the bat that this drama didn’t do it for me. It wasn’t the performances or even the premise — I think it was the execution. Trying a bit too hard, perhaps?

The drama opens with a fun cameo from Park Sung-woong, a super successful doctor with a flashy car, fancy office, and patients that worship the ground he walks on. This guy is the pinnacle of success (according to our story anyway), and it’s just what our hero DOCTOR PARK WON-JANG (Lee Seo-jin) dreams of. He visits his idol, and the contrast between the “successful” doctor and our hapless and misguided hero couldn’t be more sharp. 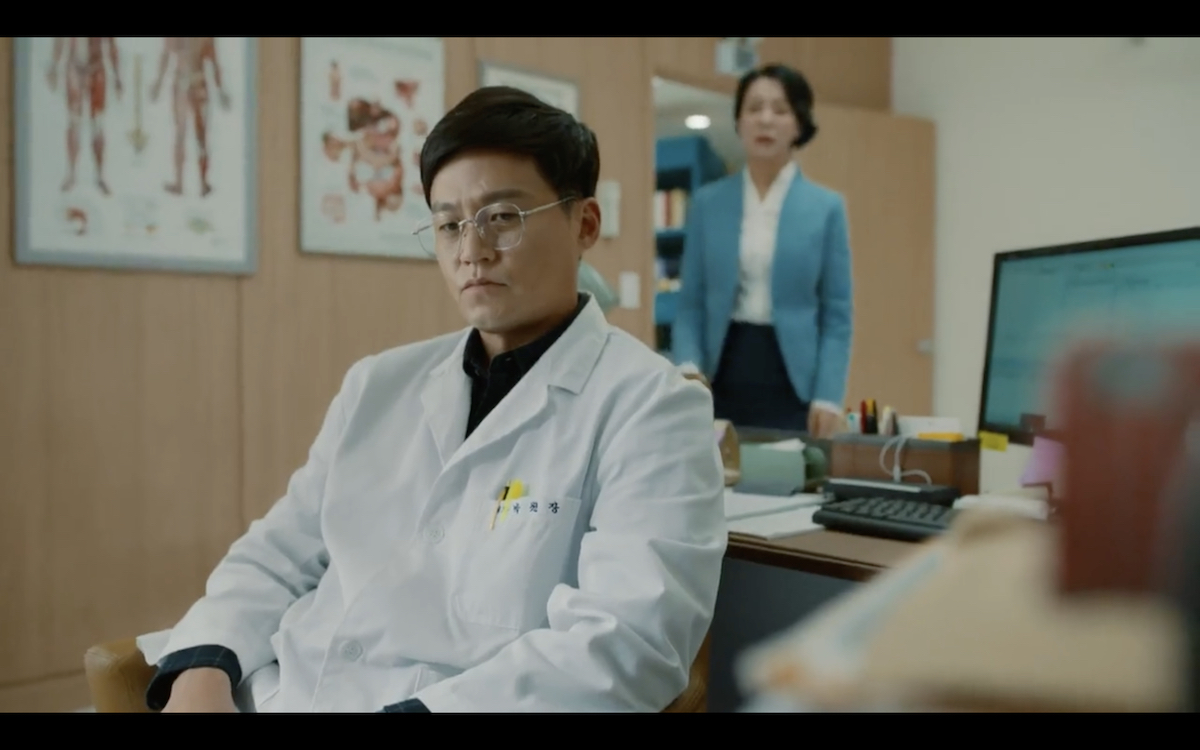 To contrast the flashy entrance of Park Sung-woong, we watch Won-sang enter his brand new clinic. Everything about it is the polar opposite — from the penny pinching to the empty waiting room.

Won-sang not only has lofty dreams of material success, but he also has a household to support. His wife SA MO-RIM (Ra Mi-ran) is spending his money before he makes it, even though half of it is good-intentioned and in celebration of him finally opening his own clinic.

It’s so hard to explain the tone of this drama — and that’s the part that didn’t land for me. Interspersed throughout all these character introductions and plot setup is a mockumentary and fourth wall breaking element I wasn’t expecting. We watch Won-sang, his wife, or the nurse that works for his clinic, act out the scene in front of them — and then we cut to them talking directly into the camera and cutting the BS, so to speak. 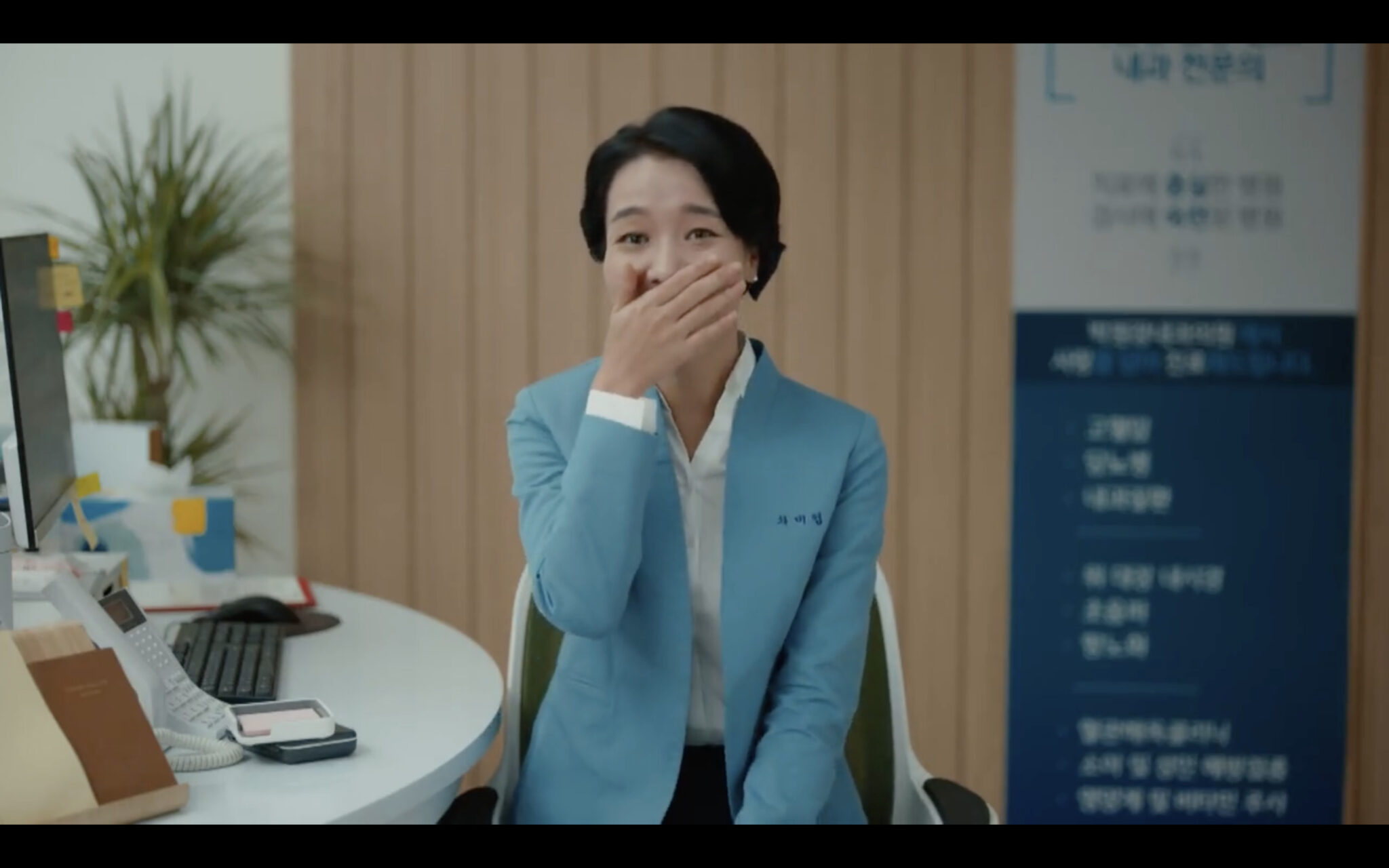 One example of this might be one afternoon when NURSE CHA MI-YOUNG (Cha Chung-hwa) goes into Won-sang’s office. She’s concerned that he needs to eat and lays it on thick — but when we cut to her mockumentary segment, we learn she only cares if he eats today because she’s craving a dish from a nearby restaurant that will only deliver if you order more than one serving. While I completely get the humor at play, and how the mockumentary direct address segments are supposed to subvert the story, I can’t say I actually enjoyed it.

Which leads me to a bit of criticism I wasn’t expecting to have to make: the production comes off as quite low budget. I was expecting different of a TVING original, but I guess they’re going for that daily sitcom feel, shaky handheld camera work and all. There’s nothing wrong with that in and of itself, but it’s a bit jarring when you’re used to the super crisp and gorgeous productions we see in the regular primetime slots. My eyes are used to a feast. They are spoiled. 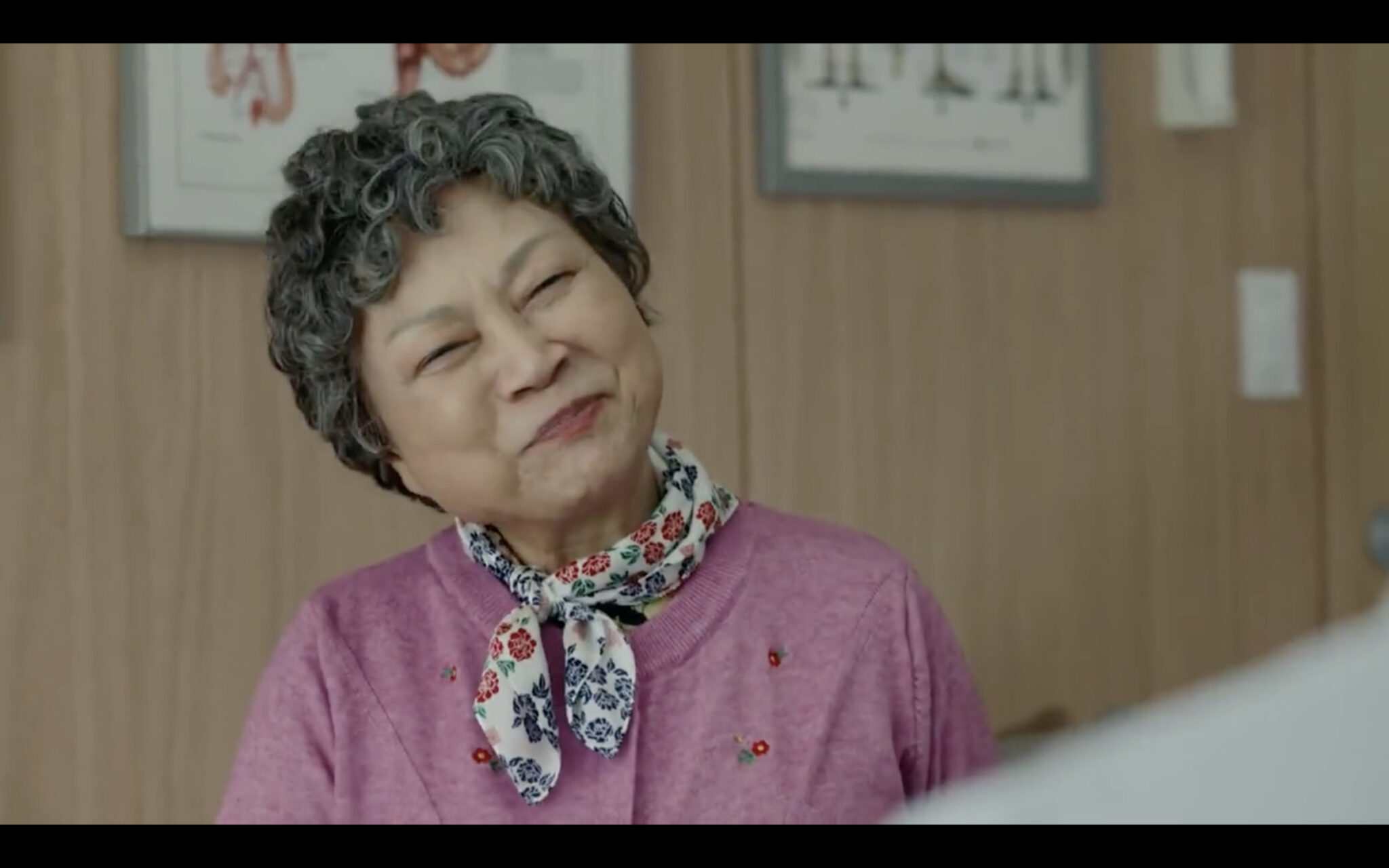 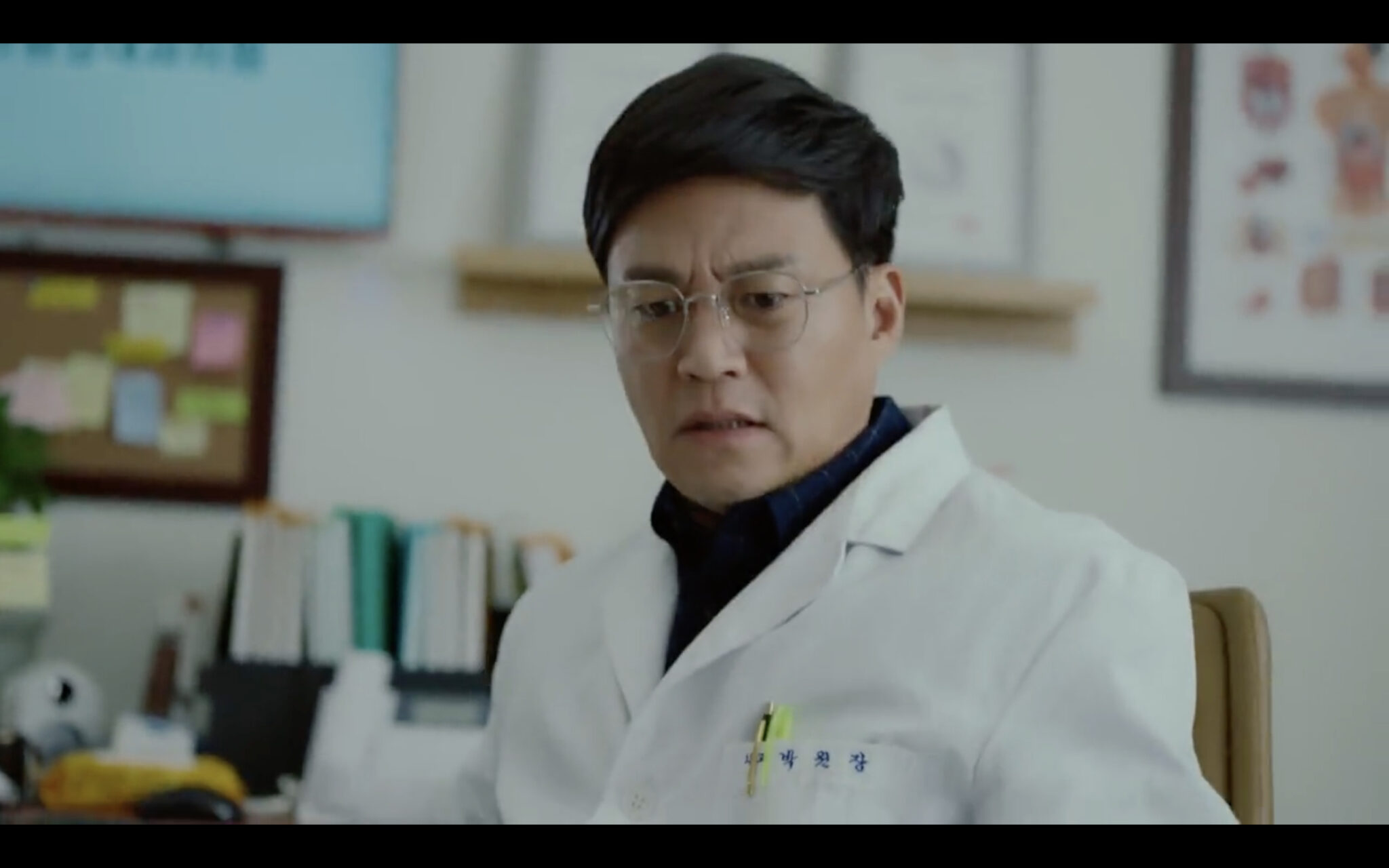 Won-sang is struggling to get any patients whatsoever, and reaches out to nearby professionals with their own medical practices. Here he gets all sorts of twisted advice, like the female gastro doctor’s advice to offer patients sympathy by way of exaggerated baby talk. She even gets Won-sang to practice her line about how much your rectum must hurt, and assuring her patient, “I’ll make sure your rectum smiles brightly!” Again, this should be funny, and I love Lee Seo-jin and want this to work, but I still feel like I’m sitting on the outside of this story and I can’t get in.

That brings me to my main takeaway from the drama, which is that the characters are not presented in a way that makes us relate to them, or feel for them. While we can share Won-sang’s horror when his first patient finally arrives and it’s a halmoni who wants her scraggly toenails cut (since it’s a mock-horror LOL moment), it still doesn’t pull us into the characters or the story. Again, this could be just the drama’s style and storytelling. I’m admittedly fresh out of experience with sitcoms, and there’s never been one I really enjoyed, so perhaps it’s my perspective that’s out of whack here. 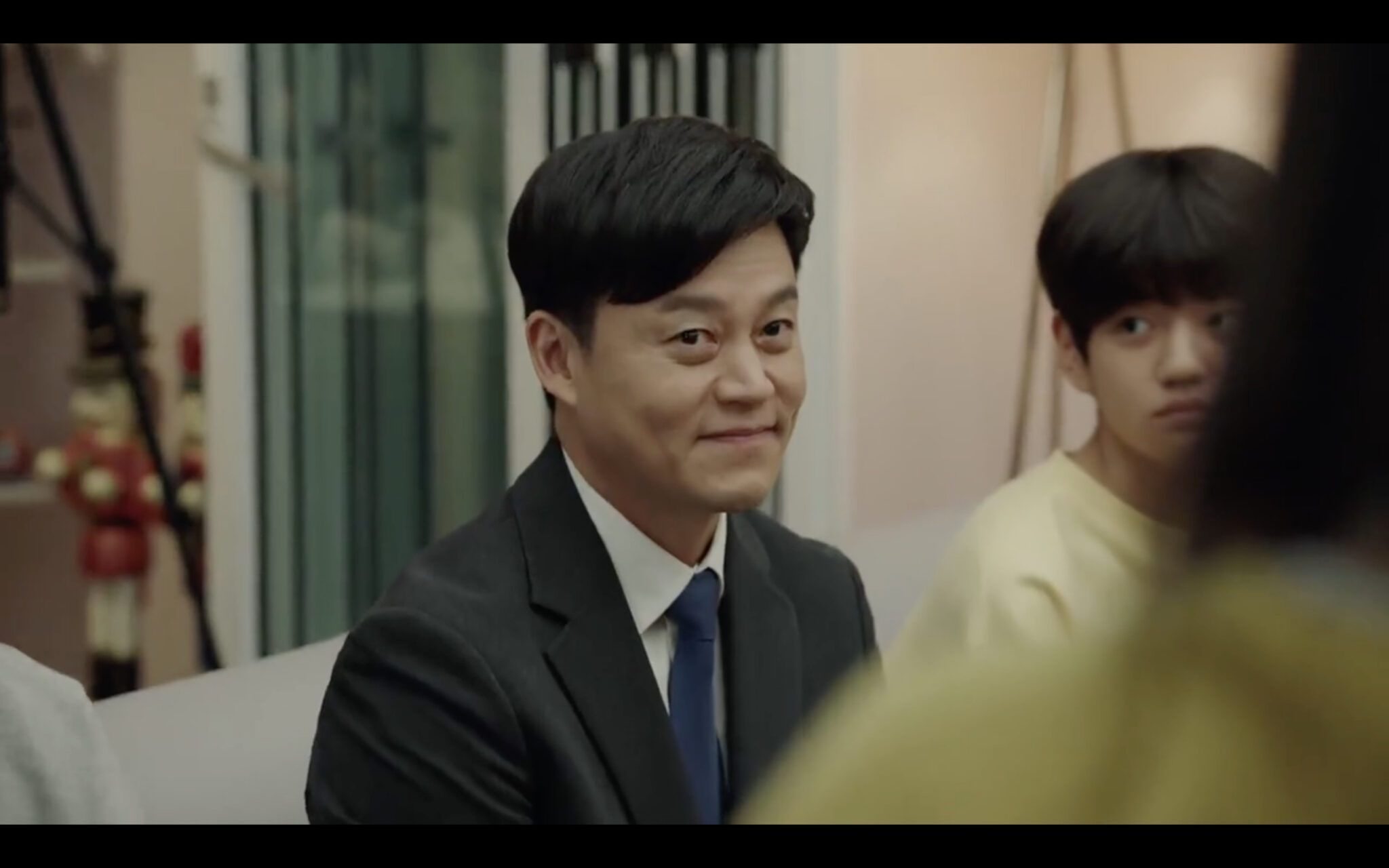 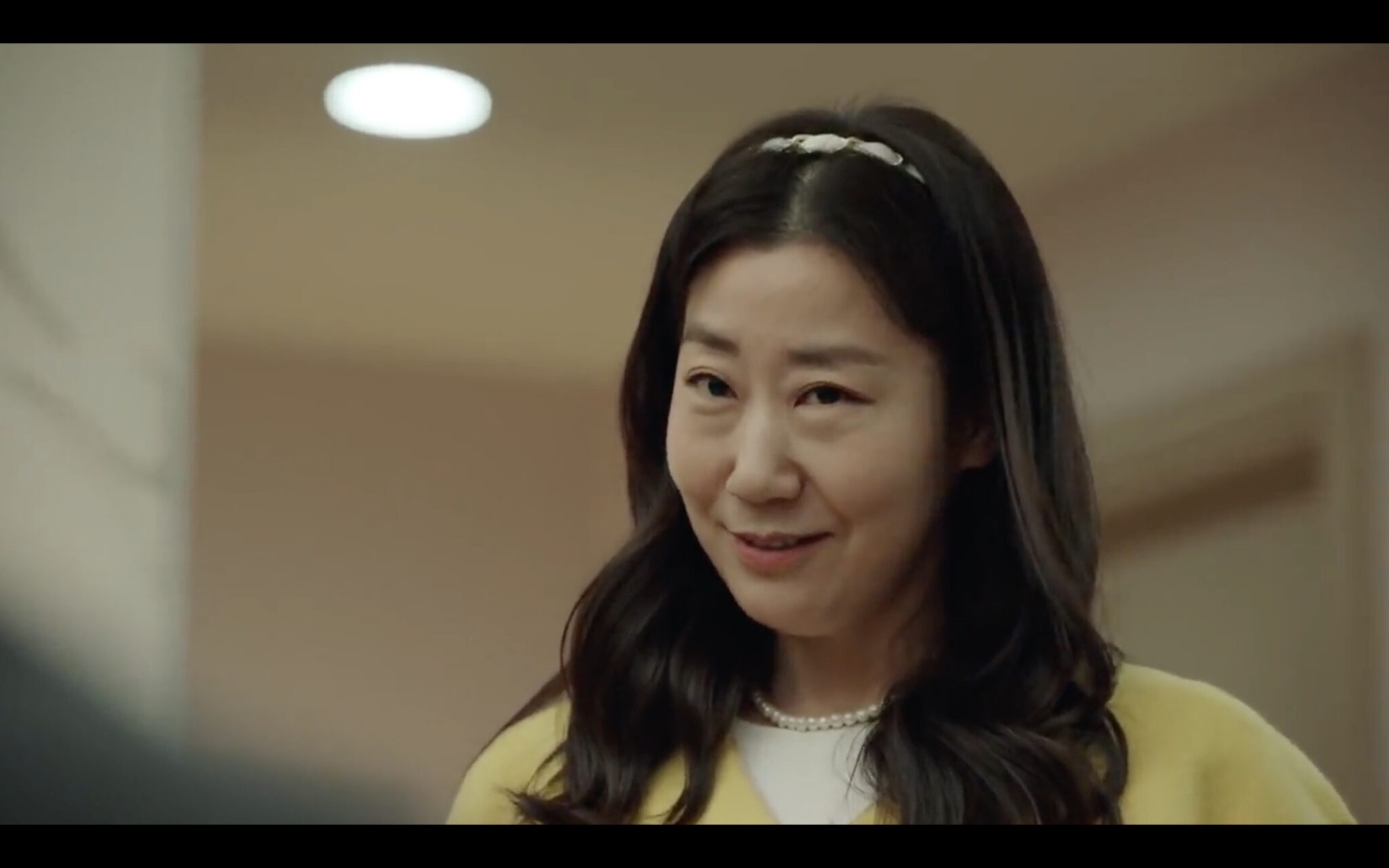 That being said, it is hard to get attached to the characters or their dreams. Even though we see sad evidence of Won-sang’s shortcomings (both present and past, especially with that awful NICU flashback), I don’t feel for him in the way I want to. And it’s not just because I know his motives are suspect — it’s just because the story isn’t delivered that way.

Perhaps the answer for this is in the balance of satire versus story. If I went into this expecting a fully fleshed out comedic drama (which I surely did) and got a barebones satirical sitcom instead, that in itself explains the dissonance.

I’m sure there will be others that really enjoyed this, though, and the tone and delivery are indeed different — and there’s elements to the story that really work. Lee Seo-jin’s constant eyebrow waggle at his wife is great, as is the flat-out way the drama calls out Won-sang’s motives, or how he treats his kids, or the PPL intervals — I just wish it was delivered in a different package.

Editor’s note: We’re rejigging our usual opening reviews into first impressions to better reflect what they are (erm, first impressions). It’s also a way for us to survey interest in continuing to cover the drama. 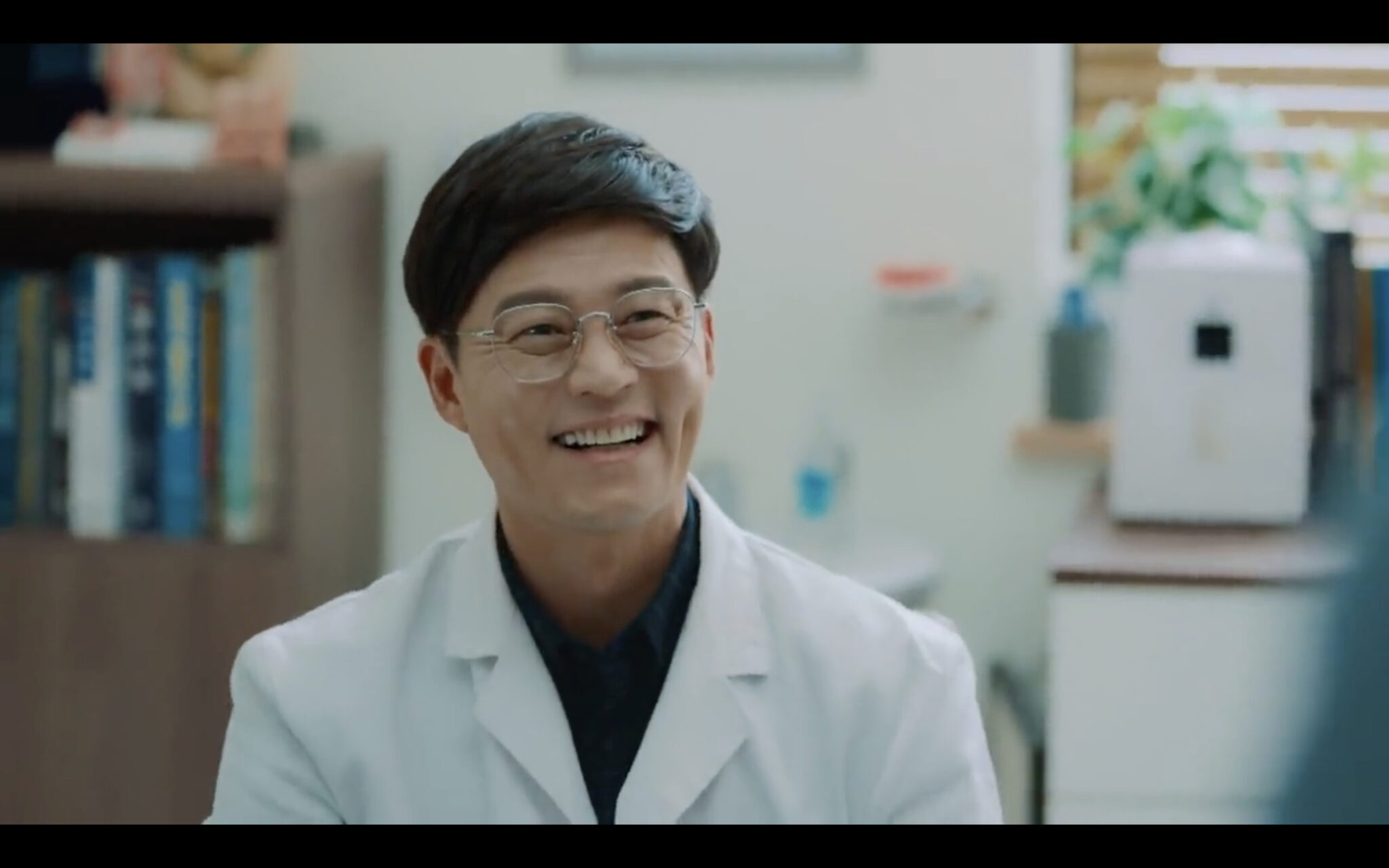 I was expecting to be a little more silly. It end up being great as a background drama.

“Currently Airing” doesn’t include web dramas or smaller cable channels. Despite the increase in high-profile web dramas, I can understand. There are so many OTT services that it would probably be hard to judge what to include and what to exclude.

I am keeping a very close eye on KakaoTV: this is where I found Mad For Each Other and The Great Shaman Ga Doo-shim. And the reason I'm saying this: the writing of dramas seems a lot more mature and, how shall I put it, less-cliché-ed, maybe? Not sure, but it's the one OTT I'm tracking very closely. (I'm gearing up to watch their latest offer too, Would You Like Cup of Coffee.)

Good point, but Lord Cobol also expresses my level of interest in this show- which is pretty low at this point.

'Show window', 'Uncle' and 'King of tears, Yi Bang Won' are missing from the list. For me, it does not matter if they air on smaller cable channels, even their ratings are better. Moreover, 'Yi Bang Won' is not on a small cable channel, it is a weekend drama on KBS! I don't know why they are ignored, I hope the'll be invluded soon!

@missvictrix
I don't think your non-experience with Korean sitcom is the problem here. Even with my expectation for the usual silly sitcom vibe, this drama just didn't deliver. The execution is just off, somehow.

I have to agree about the drama coming off as low budget. Going for sitcom vibe doesn't have to mean incapable of being a feast for the eye. If Super Family back in 2017 managed to look like high production comedy and deliver both laugh and heart, this one should be able to achieve the same.

This one’s right up my alley. I thought it was hilarious.

If you like Rob Reiner mocumentaries, and cringe shows like The Office, you'll appreciate this one. It’s a glorious mashup of those two styles.

I thought the first two episodes were okay.
I was expecting like Pegasus Market type of nonsense but this is more like The Office like @gidget mentioned.
I'll watch the next episode to see how it goes...