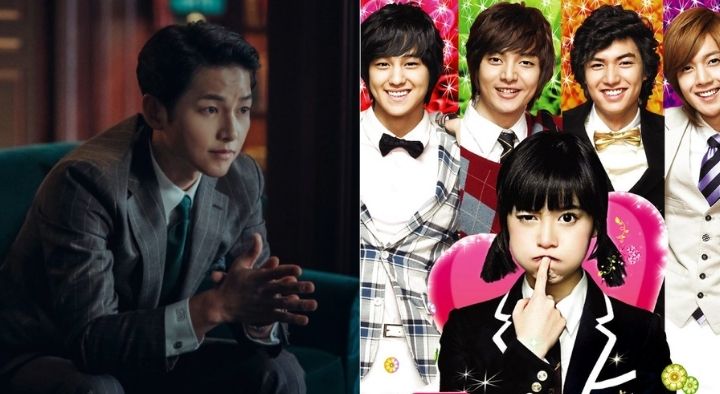 Chances are, if you’ve been around Dramabeans for a bit, you’ll not only know what mutant baby dramas are, but you’ll find yourself looking for them whenever we post a new Staff Spotlight.

The mutant baby drama synopsis used to be a staff-only feature, but it’s too fun not to share with the community. So, we’re taking a loose-ish twist on it with our few feature, Drama Mashup!

And now for your prompt:

Blockbuster drama Vincenzo and Hallyu classic Boys Before Flowers have an unholy alliance and produce a mutant baby drama. Describe the plot.

Truck of doom wipes out nice couple in provincial Korean town, leaving a brother-sister pair of orphans. Older brother makes the noble sacrifice of distancing himself from his toddler sister, who has the prospect of being adopted by a nice, young couple who are not in a position to take both of them. Oppa is subsequently leaves SK via overseas adoption.

Fast forward 14 years -- oppa returns to SK fleeing a mafia power struggle and learns that his sis attends school with a suspiciously handsome quartet and decides to play (fairy) godfather by intimidating the four into (1) watching out for sis (but only respectfully) and (2) the quartet acting as bait in his plan to take down various chaebol baddies by attacking their soft flank -- i.e. through their incredibly shallow and obnoxious daughters.

Secondary comic plot line: not content to watch over sis from afar, oppa goes undercover at school as a teacher of modern European history, who manages to make an organized crime analogy for any significant historical event or issue that comes up. Naturally, he becomes the most popular teacher at the school, raising the suspicion and jealousy of another (faux) teacher, who is actually a shyster lawyer who wants to investigate rumors of a cache of stolen WWII gold which could be buried somewhere on school grounds.

When an night accident with no witnesses and evidence leaves a foreign lawyer more dead than alive a young high school girl saves him...When the man wakes up he finds out his memory is shattered and he only can remember glimses while his bag holds the key to his identity...The unknown man makes a proposition to the highschool girl to help him find out who hurt him in exchange of ofering her a solution out of her money problems and bullying...
The man posing as her cousin shortly finds out the famous so called F4 kids at her school might be the ones who provoked his accident making him vow to destroy the one who left him for dead...

Generic but will add adores as well...

A down to luck poor scholarship student in a prestigious school with dream of being lawyer decides to move into a building which is about to be torn down. Things are getting better. Her school is the best in the country and her building hosts a law firm where she could work part time which will bring her one step closer to her dream. But everything shatters on the first day of school as she incurs wrath of notorious F4. The head of F4 is the youngest son of the founder of pharmaceutical company Babel who are trying to torn down her building.One rainy night F4 follow her home. She spots them at entrance and she had enough. They are about to catch her but strange thing happens. The weird Italian lawyer with weird connection to building’s bird population saves her and beats up F4. She teams up with this weird oppa and one equally weird unni to bring down F4 along with Babel. After Babel is destroyed, they open a law firm called Lawyers over flowers to fight injustice in the world (also bad Italian food)

OMG this is gold. Lawyers over flower's !!

During her stay for 14 years, she had a perfect grades in her own educational life, she had a successful goals for the mafia family and even meeting the supposed-to be the first Italian F4 members or coulda been the first-ever European F4 (or even a boyband quartet).
After 14 years, she went back to Korea to start a new life: a lawyer which she want to destroying the Babel building. After that, her plan to demolishing the Babel building was successful and as a result, her family congratulated her for being the best 15 minutes of fame person in the world so the worldwide trending created a global frenzy by her. From her meeting the Italian F4 members during her 14-year stay in Italy with a richest mafia family to her celebrity lawyer who wants to demolish Babel, she was now an international celebrity thanks to Twitter, Youtube and even other social media platforms.
She then got the most expensive gold as a gift for both of all the Korean and Italian F4 members which both enjoyed a lifetime successful musical careers even the successful solo careers up to this day.

Later, the former high school girl-turned-lawyer was now one of the most successful Kpop idol of all time with each of her hits already a global smash hits.

A son of italian Mafia by his Korean Mistress, Vincenzo Junpyo Cassano had to transfer to a korean high school due to familial problem where he met a group of school richest but weak who mistook him as a chaebol foreigner. Together they took over the school and fought the school bullies who happens to target on poor kids, one named Hong Jandi whose father is a pro bono lawyer and attended the school on scholarship who Vincenzo and his 3 friend's happens to like. One day Vincenzo witnessed a hit and run case involving Hong Jandi's father and one of Vincenzo's friend who turns out to be evil and they both fought to protect each other.

Vincenzo Cassano arrives in Korea looking for his gold, which is buried underneath a school basement. This is also where F4 hangs out and watches mafia movies. They start a Vincenzo fan club, while Vincenzo and his sidekick Inzaghi plot to empty the school so they can blow it up.
One day Inzaghi flies into Geum Jan-di, who drops her ice cream on Gu Jun Pyo's feet. Gu Jun Pyo is smitten. His mother repeatedly tries to break up the pair and ends up crossing paths with Vincenzo. He vows to feed her super spicy kimchi if she hurts any of his fans...

Has anyone been here long enough to remember this Pasta-Best Love Mashup? https://www.dramabeans.com/2011/06/best-love-pasta-mash-up-birth-of-a-new-power-couple/
Too bad the video is no longer available. It was hilarious.

I found the video: https://www.youtube.com/watch?v=wUYB3osOoUI

😂😂😂 thanks for sharing….although Dokko Jin deserves better than the guy from Pasta (I can’t even remember his character name, I disliked him so much 😅).

Thanks for sharing, you guys, that was great! And it makes me realize how much of kdrama is shot in parking garages 😂

After being betrayed by his family, Vincenzo travels abroad to attend a prestigious university in Korea run by four girls known as The Mob 4. Known for their wealth and beauty, these stylish punks encourage their classmates to torment any student who challenges their authority or unrivaled hotness. To his annoyance, Vincenzo soon becomes “the chosen one” after pointing out that their little red-card game is illegal, and they should all be in prison. Unaware that he was quite the little mobster himself back in Italy, an intense battle of wills commences, and an even grander love story unfolds, as Jan-di, the head of the Mob 4, falls for his roguish charms after he dangles her out of the school’s three-story window!

OMG! all these comments are gold! Wouldnt it be fun to have a corner on DB for mutant baby fanfic. I'd read the hell out of all these plots.

It is a beautiful day at an elite high school in Seoul and various Porsches, Bentleys and Audis are driving up to the main gate. A scarlet Lamborghini loaded with four impossibly-good-looking young men (clearly in their early twenties and one with a really bad perm) drives slowly, with clusters of girls wearing the shortest skirts and acres of makeup shriek as the go past. Suddenly a gold brick falls straight on to the bonnet of the car, narrowly missing the driver, another one lands Five meters away, and as the students scatter to avoid this dangerous rain of gold bricks, a hot air balloon with the unmistakeable “Bye Bye Balloons” logo sails slowly overhead, sinking inevitably groundwards despite the the attempted unloading of ballast. The basket crashes down, taking out two cars a motorbike and an ancient bicycle. The red car disgorges it’s 4 occupants who walk menacingly towards the basket, now covered in the collapsed balloon. There is a pause. The fabric heaves. Out steps a tall handsome man clutching an ice hockey stick. There is a further convulsion and a small bespectacled woman emerges, carrying a gold brick in each hand. Three pigeons flap their way out of the basket.