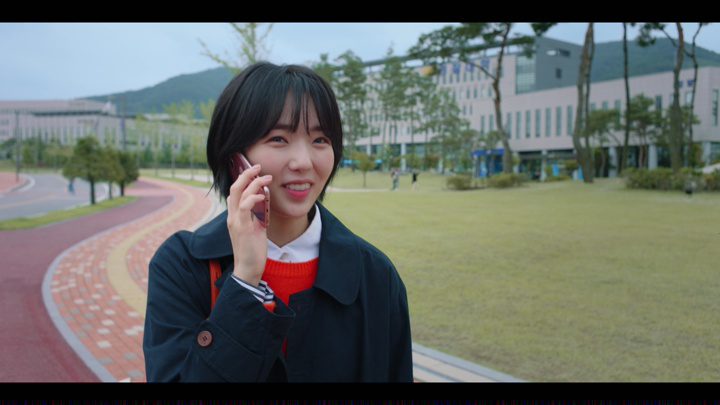 I imagine most of us who watched Police University went into Rookie Cops expecting something very similar – a lovable, youthful ensemble with big dreams and lots of lessons to learn – and I’d say we weren’t wrong. (I’m not complaining, either.) Although this first episode of Rookie Cops wasn’t all sunshine and rainbows, overall it delivered on the cute, fun premise, while promising plenty of heart-tugging emotions along the way. 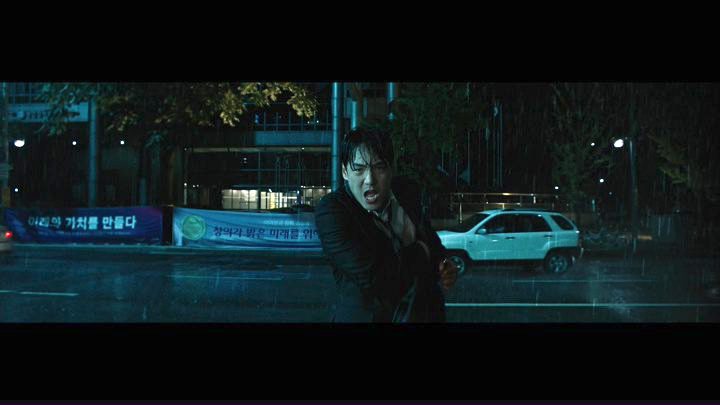 I will say, as soon as I pressed play, I had to do a bit of a double-take. The drama opens on a prologue that was much darker than I expected (and much darker than the rest of the episode), wherein we see a man (cameo by Kwak Si-yang) engaged in a bloody fight with what looks like an entire gang. Every time it seems he might get away, more of them show up, and eventually he’s taken out by a Truck of Doom. As he bleeds out in the street, a voiceover tells us everything started with that man’s death.

From there, we jump into the cute, youthful vibes we were promised as we meet our two main characters. In particular, the scenes that feature our main female lead, GO EUN-KANG (Chae Soo-bin), are often sprinkled with whimsical little animations to illustrate her emotions. 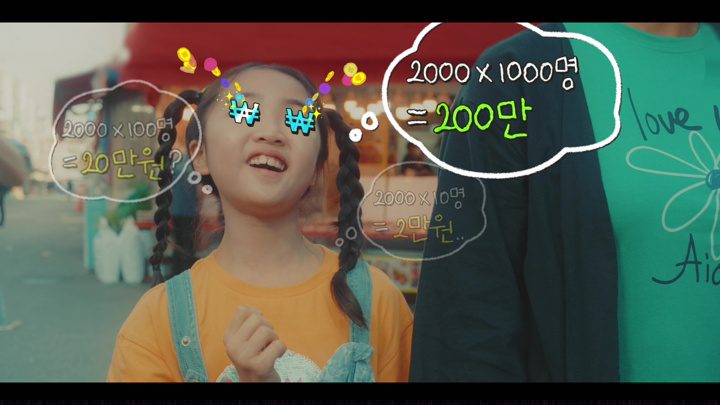 After drifting from one life ambition to the next, she’s finally landed on becoming a police officer, at least initially so she can be close to her crush. (Notably, the two of them do seem to be good friends, and he’s very supportive of her aspirations. So it’s not quite as stalkerish as it sounds.)

However, she also views attending the police academy as an escape of sorts — a way for her to break out into a life that’s solely her own. As the younger of two sisters, she always seems to shoulder the blame and the responsibility when things go wrong or there’s extra work to be done. 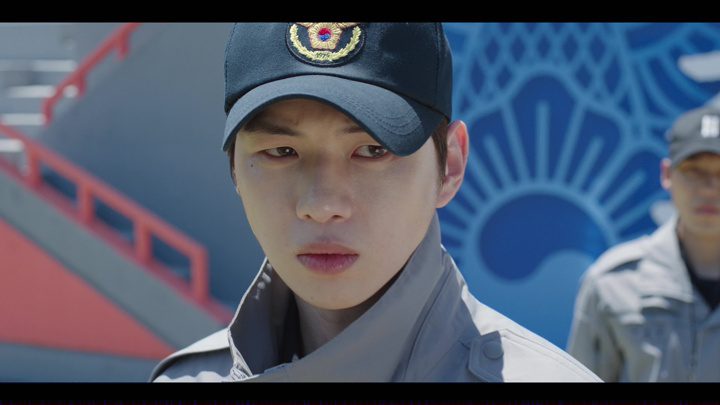 Our male lead, WIE SEUNG-HYUN (Kang Daniel), on the other hand, seems to be driven more by outside expectations. His father is a famous and decorated officer, and he definitely carries the weight of having to live up to his father’s reputation.

While Seung-hyun’s father tries to keep their relation on the down-low to avoid placing more pressure on him – and says he wants him to choose his own path in life – he’s also pretty absent from Seung-hyun’s life in exchange. 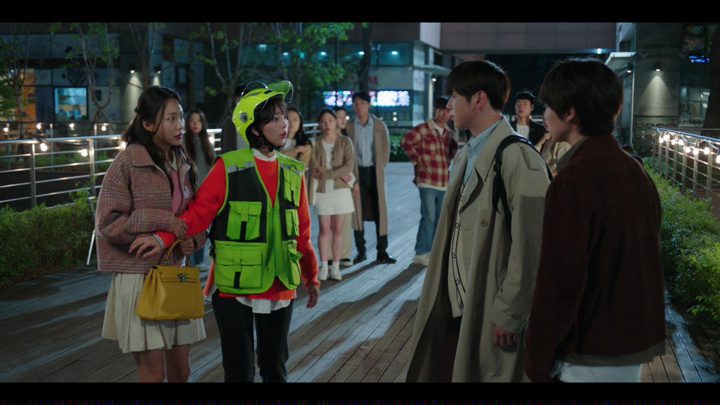 Naturally, Eun-kang and Seung-hyun have an antagonistic first meeting. This meeting happens when Eun-kang’s sister is caught with a new boyfriend just a few days after dumping Seung-hyun’s close friend (whom she dumped right after accepting an expensive handbag from him for her birthday).

The encounter shows us that both Eun-kang and Seung-hyun are fiercely protective: though she disagrees with her sister’s actions and later presses her to return the handbag, Eun-kang defends her sister from the accusations in the moment. And Seung-hyun, who had demanded an apology on his friend’s behalf, immediately steps in when the new boyfriend gets wrist-grabby and belligerent. 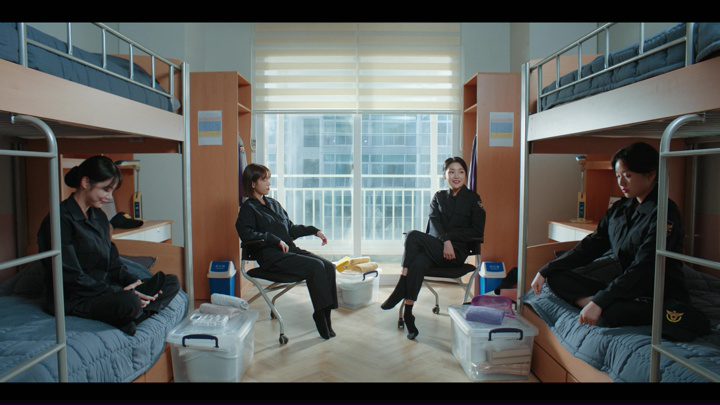 When we get to the police academy, we’re introduced to a slew of important characters, but I thought the drama did a pretty good job of presenting them to us succinctly and effectively. For one thing, it contains the major characters in two groups of four roommates, which makes it easy to have several of them interacting at one time, and provides a natural excuse for them to introduce themselves.

I especially appreciated the scene where they had to exchange their personal belongings for academy-issued ones. Each student is permitted to keep one or two small items from their personal luggage, so we get to see a glimpse into their personalities and priorities by what they choose to hold onto.

Bubbly SHIN AH-RI (Chun Young-min), for example, pouts when she has to part with all but one pair of shoes, while quiet and aloof KIM TAK (Lee Shin-young) packed almost nothing in the first place, and opts to leave behind his beanie, too. 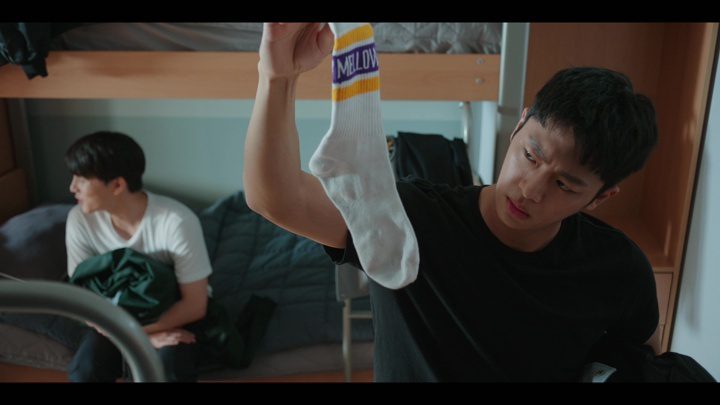 One major takeaway that I got from this first episode, is that our heroine is in for a bit of a rude awakening. Like I mentioned earlier, her scenes are punctuated by cutesy animations, and she’s full of hope for a wide-open future. Though she’s initially rejected from the academy, a spot opens up for her last-minute, which means she joins the rest of the characters a few days into their training. That causes her to miss an incident that drives home to the others just how difficult of an undertaking they’ve begun.

One of the new recruits (cameo by Shin Ye-eun) is so exhausted and beaten down by the harsh instructors, that she buckles. It’s hard for the other trainees to watch, but if they try to advocate for her (as Seung-hyun does, earning him the instructor’s disdain), they’re chewed out, too. Eventually, the recruit drops out of the academy altogether… opening up the spot for our heroine. 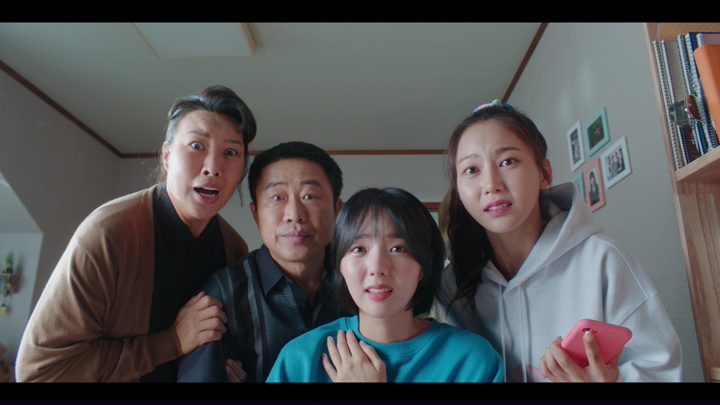 In contrast to the sobering conditions that gave her that coveted spot at the academy, Eun-kang arrives after all of this goes down, and is blissfully ignorant. She literally skips through the hallways, certain that her new life is going to be full of freedom and promise.

Eun-kang narrates at the end of the episode that her twenties were about to become a roller coaster ride — and if this episode is any indication, I have a feeling that’s exactly what Rookie Cops is going to give us.

From dark and grim to silly and cute, there’s a little bit of everything in this drama so far. Here’s hoping Rookie Cops will keep the emotional core it establishes in Episode 1, and take us on the journey with Eun-kang and her hopes and dreams for better things to come. 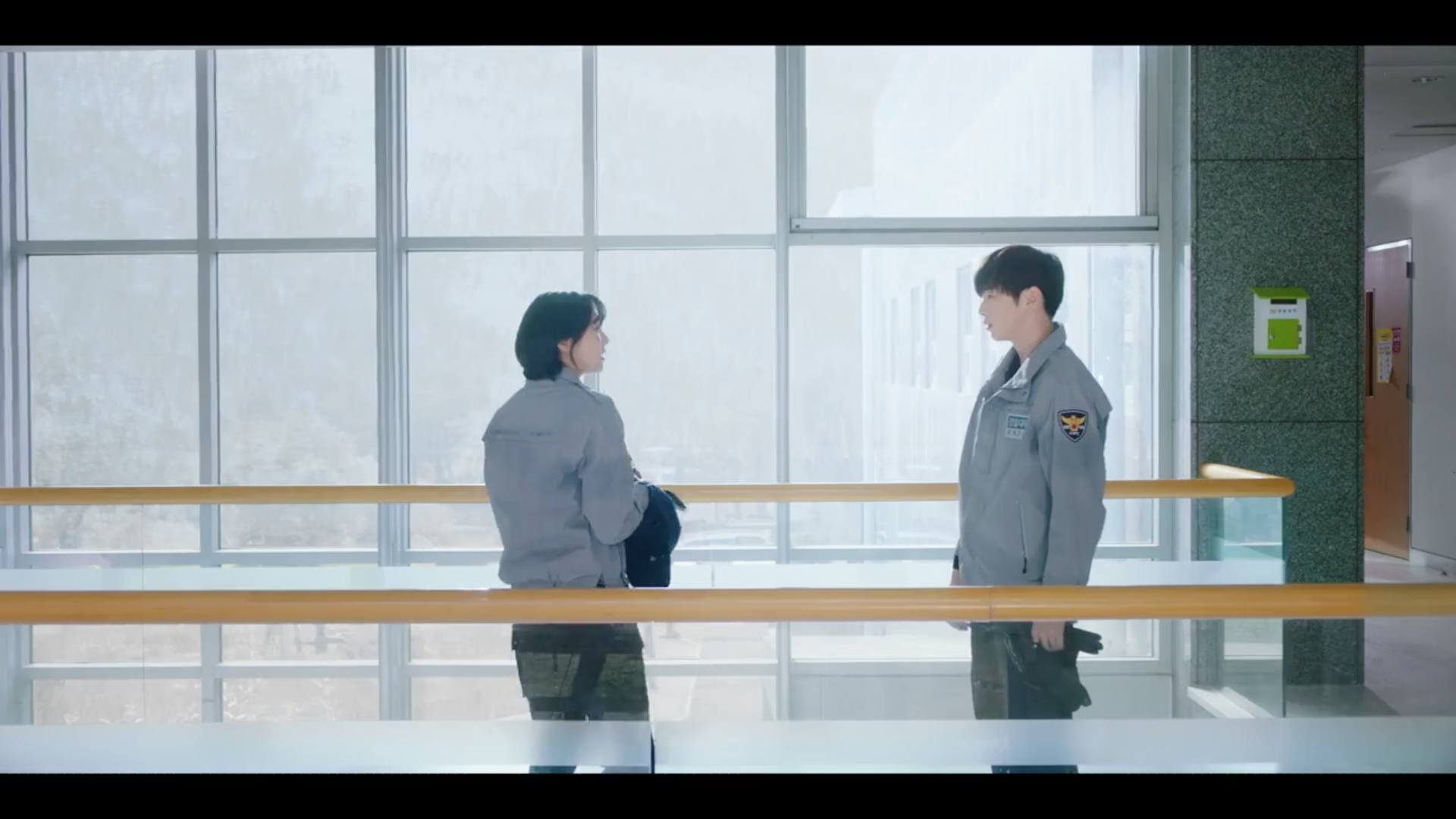 Yup, this is Police University part II. I have to say though Kang Daniel, not a good actor. Chae Soo Bin is carrying all of their interactions. That being said, I enjoyed it.

Agree! I’m a fan of Kang Daniel but objectively I’m not impressed at all with his acting skills, even compared with other idols. But then again, it’s his first so hopefully he’ll improve.

I completed this week's episodes (Episode 1-2). I am so happy that Kang Daniel and Chae Soo-bin are totally great acting performances especially the other main and supporting cast. I am totally excited for looking forward our fun next episodes to come. So I kept watching these all of the puppies for now and it's a super teen comedy-drama show that I had so much invested already at all and truly loved with this Kdrama!

Same! I loved the first two episodes, especially Chae Soobin's performance in this. I'm a huge fan of her and I'm so glad to see her back playing such a cute, fun character. The first two episodes seem promising so I hope they can keep up the pace for the upcoming episodes. I really liked Police University initially but became a bit bored towards the last couple of episodes, so I hope it won't be the same case for this one.

For what it’s worth, I’m a Disney subscriber and complained to Disney via live chat that their Korean content isn’t available in the US @ help.disneyplus.com

So annoying, isn't it? WTH?

I told them it was insulting to US subscribers. They said they would pass it on to the content management people 🤷🏼

So no legal avenue to watch this in the US?

We, alas, face this all the time here in Australia... with content licensed in the US but not for us here. It is honestly the most frustrating thing in this day and age of global media! Ultimately if they can't get licensing for it, they won't show it :(, we even have music removed from some of the drama's shown on netflix due to licensing rights, its so jarring!
Then they scratch their heads over the fact that pirating of streaming content is so high :/

Disney announced that ‘Snowdrop” will premiere on Disney+ in the US on Feb. 9. This is 10 days after the final episode. Maybe this is what will end up happening to all their shows here.

I had no interest to watch this eventhough I have D+ subscription,,but I love reading DB's first impression post so here I am, then I read 'Kwak Si Yang', ooww loove him, so yup I will watch the first ep even just for his cameo *I'm not reading the rest of the post right after kwak si yang's name, so I'm now anticipating whether I'll see him smiling in the show,,,or in despair, haha, thanks for the review @mistyisles

With Rookie Cops, I hoped it wouldn't be like Policy University. I wished they focused on the students learning their job like in Life but in comedic and light drama.

But no... It started by Kwak Si-yang being killed. And the second episode was way worse on this point.

The trailer and intro are really misleading!

For the actors, it's hard to judge for now. Chae Soo-Bin is cute in this role, Kang Daniel didn't have so much to show. I'm happy to see cutie Lee Shin-young, I like him since CLOY. I thought after How to Buy a Friend, he will get other main roles.

Chae Soobin is a radiant bundle of joy! Her character is like an excited beagle. I ADORE HER. I'm honestly happy to follow Eunkang on any adventure, but I might be slightly biased.

Other than that, how the show opened was really really weird and made me groan. Less murder and violence and more cute please.

I actually thought it was a movie the characters were watching, lol.

It's keeps on amusing me that we find a set of people who are pressing further just so as to carve their own voice and have peace of mind; and those who despite all their effort, cannot get out of the shadow predecessors have set. The contrasting pressure never ceases to spark a thought each time that theme plays out, IRL or in dramas.

8 parkchuna is still an Errant 🫘

I was absolutely not interested in this drama despite CSB being the lead - can’t believe she’s doing a teen drama! But anyway i’ve seen positive comments on her character and i do adore a spunky CSB so i might check this out for her after all.

After the disgust that netflix is ​​doing with Kdrama, it is to be hoped that Apple does not do worse.

I’ve enjoyed most of Netflix’s K drama. Crash Landing on You, Itaewon Class, It’s Ok to not Be Ok, Kingdom, Hospital Playlist, SweetHome, Vincenzo. They have had very few that I haven’t enjoyed.