The chase begins in new promos for Disney+’s Grid 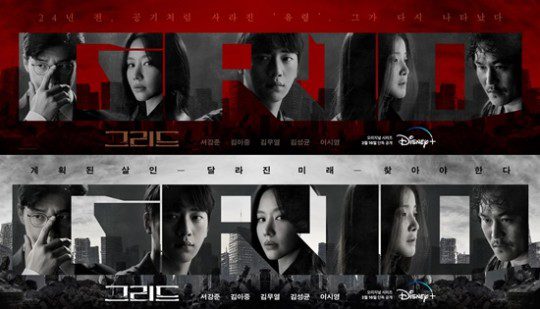 The Disney+ mystery action-thriller Grid has released new promos ahead of its premiere next month, including photos from the first script reading (from last May), and a new video teaser and character stills.

The story imagines an earth that would have been destroyed by solar winds if not for the saving act of a being called Ghost. After creating a protective grid barrier around the world, she disappeared without a trace and now, 24 years later, she has mysteriously returned.

In an ensemble cast, Seo Kang-joon (I’ll Find You on a Beautiful Day), Kim Ah-joong (Live Up to Your Name), and Kim Mu-yeol (Juvenile Justice) are part of the government and police groups who are chasing Ghost and determined to find as much information as they can.

Meanwhile, the criminal and murderer Kim Sung-kyun (D.P.) unexpectedly finds himself under the protection of Lee Shi-young (Sweet Home), who plays the unknowable Ghost.

The teaser begins with Seo Kang-joon deep in investigations and he reasons, “Rather than us going out to look for [Ghost], we need to make her come looking for us.” As Kim Ah-joong and Kim Mu-yeol help look for clues, Kim Ah-joong wonders, “Why did she appear in front of me?” and we flashback to when she witnessed Ghost disappearing in front of her. In contrast, the disinterested Kim Mu-yeol muses, “Even if her identity is revealed, it doesn’t matter.”

Next, we jump to a text screen which reads, “Pursue the mysterious being who saved humankind” before the teaser cuts to Kim Sung-kyun screaming in frustration: “If I catch you, you’re dead!” In a quick sequence, we see Lee Shi-young on the chase. Giving a small laugh, Lee warns, “Don’t let it slip out of your hands.”

Production for Grid has been led by writer Lee Soo-yeon (Forest of Secrets 1, 2) along with directors, Khan Lee (The Divine Move 2: The Wrathful) and Park Chul-hwan. The Disney+ drama premieres on February 16. 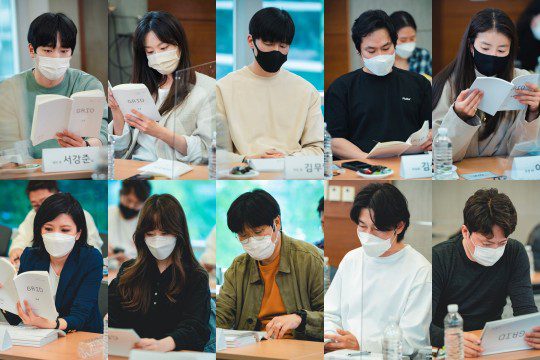 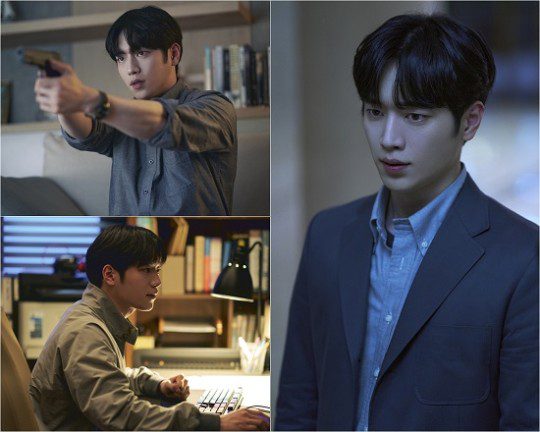 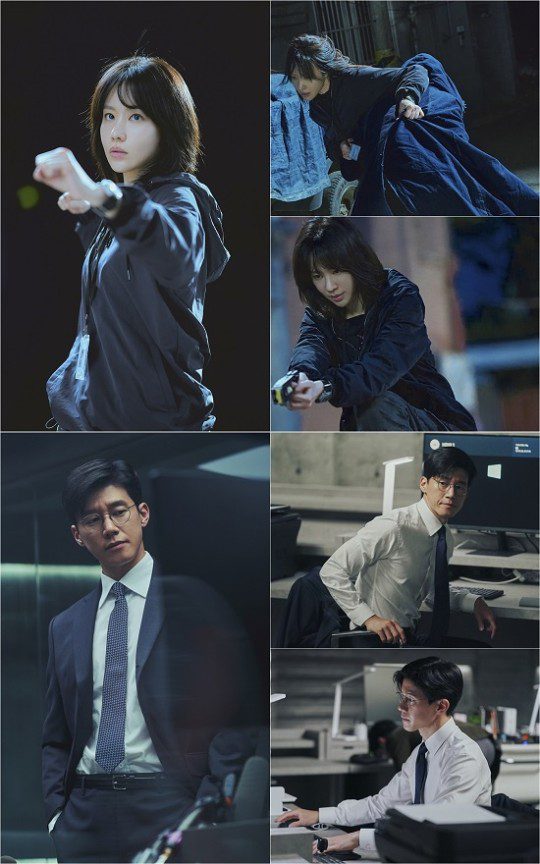 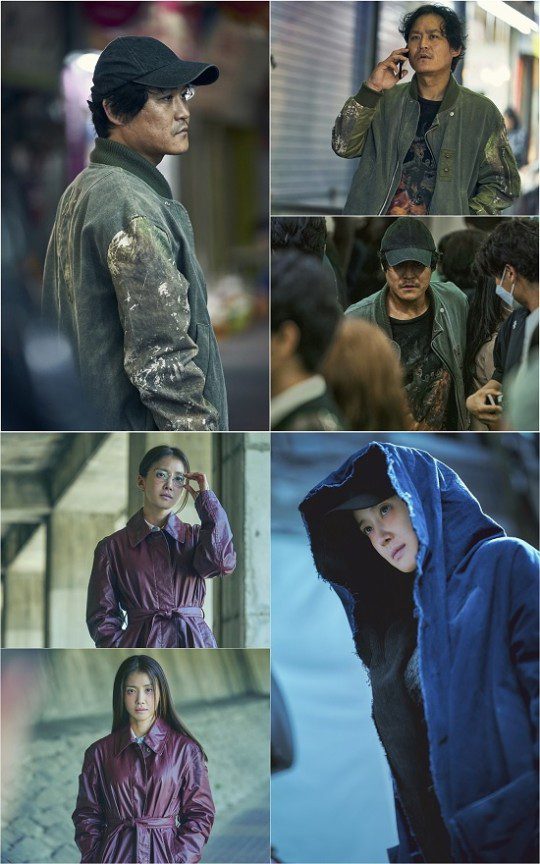 I didn’t know Disney+ had joined the Kdrama world. And with gritty stuff, no less. Interesting.

More and more, I’m seeing the way Netflix has disrupted the industry, for good...and bad

It's hard to know what think about it with this trailer... Who is Ghost? She saved the world when she was a teenager? Why they are chasing her now?

The casting is good!

Oh dear, writer-nim never took a science class. Instead of calling the protector Ghost, she should have been named Magnetosphere.

What is the point of this when it won't be available worldwide? I'm beyond upset! Watching it illegally is annoying!

Kiss six sense is a webtoon still unfinished. It's a pity or maybe not.🙄🤨

I LIIIIIIIIIVE because Lee Sooyeon comeback

Excited to see how this all goes, love the cast and cautiously optimistic :3

Yes! I was glancing through and nope, nope, not interested until - what, this is a Lee Soo-yeon’s production!!

Why does this have to be on Disney+??? I hate watching illegally, and they seem determined not to release their k-dramas worldwide.

I don't really understand what the story is about but the casting is good.

Disney + have lots to learn and catching up to do before they can be as good as Netflix. What’s the point of doing a drama if ur not going to let everyone see?

The writer is good, cast is good, and I can’t believe I’m saying this, but I wish it was at least on Netflix. I have Disney+ US, but all these Korean titles seem to only be released in Asia first (and only?). It’s annoying. Does anyone know any VPN’s that you can use on more than one device (we have a fire stick, Roku, AppleTV and an iPhone).

ExpressVPN
NordVPN
Are good and work on 5 devices

It's very annoying. Are they also subbing it in English? Netflix has been around much longer, and I still don't like their sub. I don't see Disney+ doing any better.

I’m assuming they will since not all of Asia speaks Korean. Australia and New Zealand are part of Disney+ Asia, I believe.

Snowdrop is supposed to be available on Disney+ (Star) a week after it completes airing in Asia. So this may be the plan for their future releases. It doesn’t help here in US because we don’t have STAR as part of Disney+. Maybe they will add it to Hulu here.

This thriller gave off quite a strong sci-fi vibe, which is one of my least favorite genre. But it has Lee Soo-yeon at its helm and I couldn't help being extra excited. Given how she managed to take an unusual approach at medical genre and produced something high quality like Life, I'll trust her to do something similar with her sci-fi project.

Science fiction in dramaland has been a hit-or-miss genre for as long as I can remember. However, if there’s anyone who I can trust will be able to handle it, it’s Lee Soo-yeon. That writer can do no wrong.

That cast! It’s so good to have Seo Kang-joon and Kim Ah-joong back. I swear these two somehow look even more beautiful than before in the promos - how is that possible? There isn’t a single person here who’s a weak link. I’m so excited.

Now, it would all be perfect if not for that damned Disney+ thing. I don’t have the streaming service because I don’t want to pay that monopolizing corporation even more of my money than they end up getting (I’m broke, okay?), nor do I intend on getting it just because they got into the kdrama business. But it wouldn’t even matter now would it? Because they’ve geo-blocked access to these shows only to Asia. Such a stupid business move. And here I thought these people wanted to squeeze out every dollar we had.

Right!!!! Who ever made that decision is living under a rock. It’s like they are unaware that not only there are Koreans living on the other side of the world that would be interested in watching these kdramas, but also many many non-Koreans would be too. Do they even know about BTS, Blackpink, Kpop, Squid Game, Parasite...?? They are loosing so much money because most people are watching these kdramas illegally rather than subscribing or renewing their subscription.

I hope they will at least release them worldwide once they are done airing. I guess only time will tell since there has been no announcement so far.

Even if they release it later its not the same as watching it while it airs! How did Disney learn nothing from the whole SG phenomena! They are the most frustrating OTT platform! Why can't Netflix or Apple have this at least they air it simultaneously!

As usual I am in total agreement with you. @oldawyer gave me excellent advice a couple of weeks ago in terms of temporary subscriptions, and Lee Soo-yeon would be enough to get me to pull the trigger temporarily (well, that and the fact that my wife loves Hamilton, which streams only on Disney--but do we really need to see that again? Its not like its a well done love confession scene in a Kdrama which reveals new depths of emotion every time its re-viewed!)

Not only are Seo Kang-joon and Kim Ah-joong two of the more attractive actors in Kdramas, I thought Seo Kang-joon was the highlight of an otherwise mundane romance When the Weather was Fine, and Kim Ah-joong was certainly someone I'd have rushed back from the Joseon period for in Live Up To Your Name! (Although, tbh, if I was a time-traveler, I'd rush back from the Joseon period for anyone, man or woman!)
As others have said, its hard to figure what Disney is thinking here. Obviously there must be some stats that have convinced them that the viewing market is more globally segmented than it is. I've long been annoyed with Netflix's strategy which is somewhat similar, although not quite as restrictive. I'd be interested to see what the costs would have been in releasing it to the U.S. vs. the potential revenue from new viewers--I bet they are drastically underestimating the latter.
Let's face, it though, Disney has for decades been an annoyingly conservative company in terms of handling content, especially given their cultural dominance. Look at the big hits on Disney + -- stale Marvel comics blockbusters, Star Wars rehashes, and their own animated features from decades ago. Netflix has at least been a little more daring!

Since I doubt Disney is going to change plans based on the loss of my 30 dollars or whatever, it looks like I'm (as usual) going to be dependent on Dramabeans for my vicarious experience of the show!

Disney+ premieres Snowdrop in the US on Feb 9th. This is 10 days after the finale. Netflix had similar deals on some of their Kdramas (JTBC) that it couldn’t air in US until the series had completed its run in South Korea. Disney may have a similar deal. So this may be the process of all their shows. They will air, we just have to wait.

I want to watch Lee Shi-Young in another drama so bad but I have very strong opinions about Disney and I think I may have to give this one a miss unfortunately even if I could stream it :(

Ummm, not to be completely shallow but whoa does Kim Mu Yeol look great! 😍

he'll forever be our beautiful banker...

IKR? It also helps that he's a darn good actor and can carry a drama.

He really is. I hope this will bring him more and bigger roles.

So Lee Si Young is like the Michele Yeoh of Korea, always in action 😂 😍😃😃