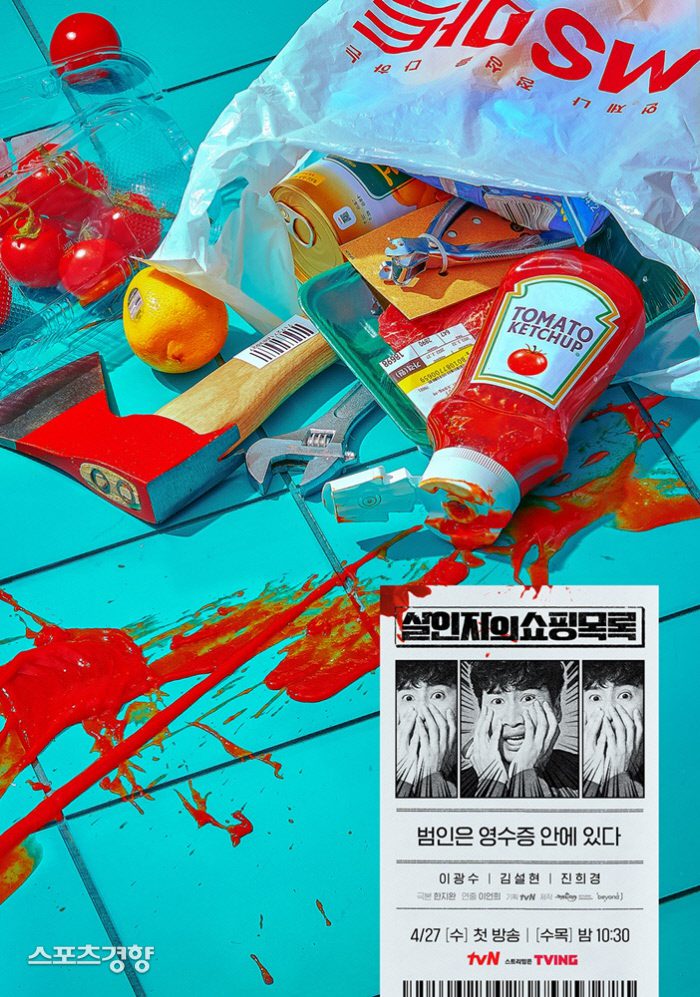 Fun and campy promos have been released for tvN’s upcoming Murderer’s Shopping List and I’m stupidly excited to see Lee Kwang-soo (Live) in a new comedy-mystery.

The story takes place in a quiet and ordinary neighborhood where a mysterious murder incident occurs out of the blue. The only real clue to the murderer’s identity, though, is a receipt from the local supermarket where Lee Kwang-soo works as a cashier and his mom Jin Hee-kyung (Was It Love) is the owner. Teaming up with police officer Seolhyun (Awaken), the three put their heads together to try and help solve the crime.

The new teaser begins with Lee Kwang-soo trying to search between the gaps beside the store counter while Seolhyun is busy investigating the crime scene. The music is tense as Lee squeezes himself between the furniture and grabs the torn paper receipts. Examining each shred carefully, he tries to piece them back together and his voiceover is repeated in the appearing captions: “The culprit can be found in the receipt.” Suddenly a customer arrives off screen, throwing a bagged fish onto the counter and scaring Lee Kwang-soo. We hear the customer asking to pay for his purchase and he tells Lee to throw out the receipt.

After the drama’s title card, the music takes a comical turn and we cut back to Lee Kwang-soo still trying to sort through the torn receipts. Jin Hee-kyung peers over Lee’s shoulder to see what he’s doing and gets angry when she realizes what he’s up to. Jin scoffs, “What do you think you’re doing? Do you think you’re CSI or something? What is this?!” She grabs Lee in a headlock, reprimanding him, and Lee cries, “Mom!” in protest. Seolhyun watches the scene unfold with growing panic and the teaser comes to a close as she quickly sneaks away unseen.

Excited for this! I really like this approach to investigating the murderer. It’s been a really long time since I’ve seen Lee Kwang-soo in an acting role.

That poster is art.

Was The Great Seducer worth watching?

Did you watch Roommate? Shin Sung-woo was charming.

I'm gonna say no, The Great Seducer is not worth watching, although I unironically loved it because of the bad trio Woo Do-hwan, Moon Ga-young, and Kim Min-jae, who had insane amounts of chemistry.

The Great Seducer may be bad, but that trip will forever be iconic. I mourn to this day that they were cast together in that dumpster-fire instead of the masterpiece they deserved.

*that TRIO will forever be iconic.

This is why you double-check for typos, folks!

It was a really bad trip. 🤣

It was a terrible, horrible, no good, very bad trip. But those precious few moments of Woo Do-hwan, Moon Ga-young, and Kim Min-jae together will go down in kdrama history.

I will look for Roommate, then. He started out as a famous hard rocker in the old days.

Oh, now I remember Roommate! Didnt Shin Sung Woo turn out to be a good cook, or sort of all-around Mom?

Yes, that was him!

The Great Seducer is dreadful and a waste of three super talented young actors and quite a few older ones as well.

Those three were in a bad drama?? Together, all at once??

Thank you! I'm sure you heard my sigh of relief.

It looks weird and fun!

I am hoping MURDER’S SHOPPING LIST will at least be picked up by OnDemandKorea (ODK)and justify my yearly subscription.

O/T. The last drama I watched on ODK was the excellent THE GOOD DETECTIVE (2020). The good news is that THE GOOD DETECTIVE 2 was in production until Son Hyun-joo contracted the coronavirus. Here is the story:
https://www.soompi.com/article/1515120wpp/son-hyun-joo-diagnosed-with-covid-19-the-good-detective-season-2-halts-filming
Hopefully SHY has recovered and production can continue.

The poster is great. I'm excited to see Lee Kwang-soo back on the small screen, in a role that looks perfectly suited to him. Hopefully, with only eight episodes, it's a tight, fun little comedy-mystery.

Weird shenanigans in supermarkets do tend to appeal to me, so here's hoping.

You know Sic when I was living in Queens (NYC) and scoured about the frozen food section of local Asian markets to see if they carried Melona bars you would sometimes come to mind lol.

I've been told I have that effect... :P hehehehe

Will watch for Lee Kwang Soo because I love that guy. Still not convinced about Seolhyun's acting chops but I liked her on Running Man.

I have only two Lee Kwang-soo dramas under my belt and enjoyed him in both: (the somewhat maligned) HWARANG (2016/17) and the great LIVE (2018) in which his mom was played by none other than the wonderful Yeom Hye-ran.

O/T. Yeom Hye-ran fact: In 2018 she appeared in both LIVE and LIFE. She was terrific in both. One of my favorites.