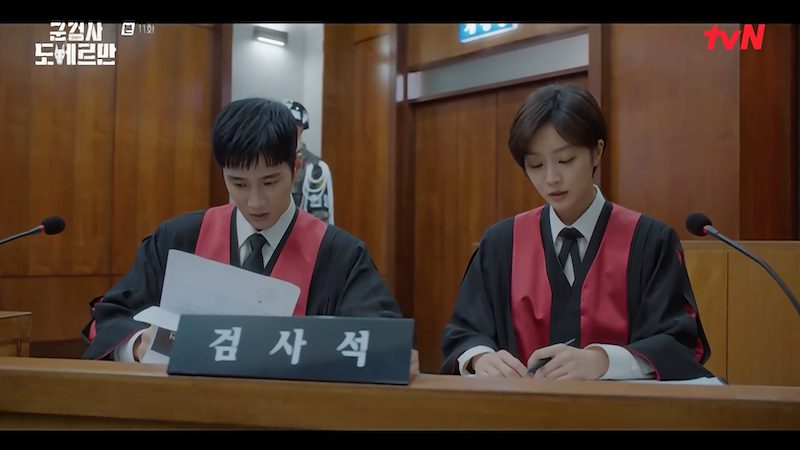 Now Noh Hwa-young becomes one of my favorite villains. She is single mother (love her son but at the time still want to discipline him, not spoil him too much, though somehow does in the wrong way. but single parenting never easy), the first female major general in the army (she saves her female aide from sexual assault though for her advantage), she is psychopathic yet she is doing her deeds in graceful way, she is arrogant, but know to bow her head and calculate when to strike back even from the back. Ahh so much contradiction. I dont want her to fall, I want her to become 1st commanding army general, or 1st female SK president. Haaa 😂 She is up there with Mishil.

I think that these 2 episodes were my favourites!

Some complexity was added to the villain that is No Hwa-Young, beyond her objective of getting to the top of food chain in the military and I love it.
Sang-Ki and Ahn are the funniest shippers who are also "unrequited lovers" 😂😂😂😂

The disappointment for the week is definitely Mr Kang. I started getting suspicious of him last week but I'm still shocked that he's actually siding with Yong Moon and betraying Woo In/Bae Man

I love that little tension between Do Bae Man and Cha Woo In 😍. They should keep it at that though

That ending was scary! I think poor Sang-Ho is the one that snapped 😲😲

The show gets its gears running when they delve into the seediness of the military. That ending with the shooting was haunting, and very well done. I know due to gun laws in Korea we rarely see that type of visceral shootout in a public space, but wow that was eery.

While Jo Bo Ah and Ahn Bo Hyun drew me in this show at first, I feel like the writer (looking at her films, it was like ah I see!) she know how to insert comical humor with upright positions quite well. Its the supporting characters who are hilarious, and the scene stealers for me esp. Ep 9-now.

No Tae Nam is another character who has been surprising, while he's still awful for what he's done. He's slowly trying to combat his mother, and do what's right. It's interesting that D.P really opened the water gates for showing what goes on in the military, which is great.