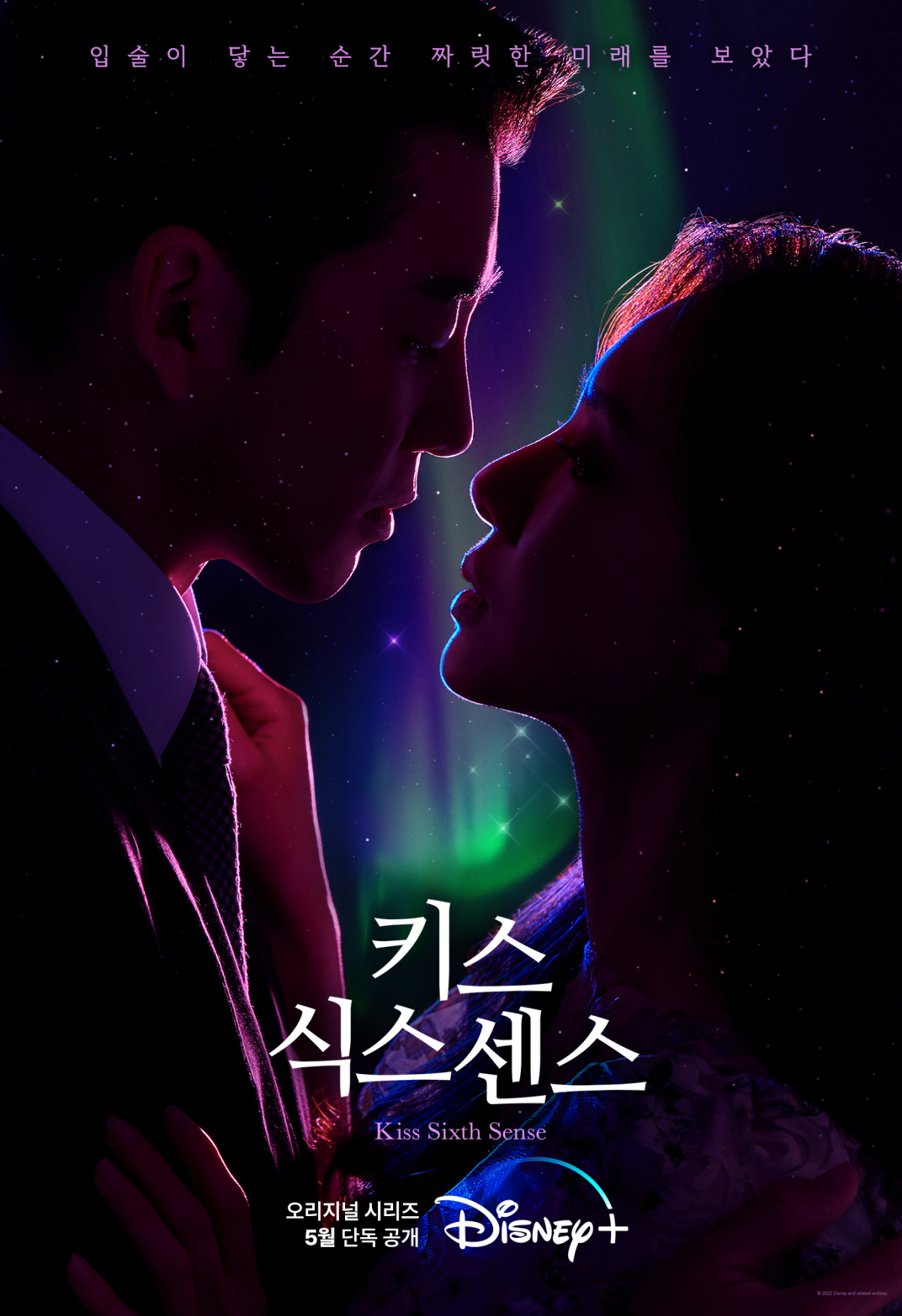 Based on a popular webtoon by the same title, the romance stars Yoon Kye-sang as Cha Min-hoo. Talented and successful, he’s won top awards for his advertising work and is considered an ad-making god. What most people don’t know, though, is that Yoon has super heightened senses and his ability to see, hear, smell, taste, and touch is 10x more than the average person. As a result, he’s incredibly sensitive and easily irritated.

Although competent and skilled in her own right, working for the prickly Yoon Kye-sang is challenging and often stressful for Seo Ji-hye, who plays the character Hong Ye-sul. But she is hiding a curious power as well: when her lips touch another person, she’s able to see that person’s future. Although she doesn’t know where her ability comes from, everything she foresees has always come true. As if life isn’t stressful enough for Seo Ji-hye, ex-boyfriend Kim Ji-suk has suddenly come back into her life, too. Playing Lee Pil-yo, Kim’s character is an acclaimed film director who still has feelings for Seo. (Sigh, another second lead role for Kim Ji-suk — the drama gods are so cruel).

Focusing on Seo Ji-hye, the first video teaser begins with Seo walking over to the window with her coffee as she muses, “Isn’t the lobby nice when it rains?” On cue, rain starts to fall outside and a shocked Hwang Bora (Dal-li and Gamjatang) asks, “What? How did you know?” Seo explains in voiceover, “I don’t think anyone will believe it. But when my lips touch someone else, I can see their future.” The appearing text screen reads, “A person with the power to see the future.”

We then cut to Seo Ji-hye on the job where Yoon Kye-sang gives her a hard time: “Assistant Manager Hong Ye-sul, if you don’t have what it takes, then don’t bother trying.” As these things happen in dramaland, Seo and Yoon share an accidental kiss and Seo complains, “I knew from the start that I shouldn’t get involved with that jerk.” A text screen then cuts in, reading, “Foreseeing an unexpected future,” before we jump to what Seo sees in her vision. The teaser comes to a close as Seo bemoans her fate, “I saw a future that should not ever happen. Me, in the future, with Cha Min-hoo… What are we doing!?”

The second teaser is from Yoon Kye-sang’s perspective, as he reprimands his staff during a meeting: “If you’re going to treat this like a college group project, then you should start paying tuition too, right?!” The following text screen reads, “A prickly and sensitive personality,” and we quickly transition to Seo Ji-hye running up to get Yoon’s attention, unaware that he’s changing clothes. An annoyed Yoon asks her, “What do you think you’re doing?” In a sequence of shots, we see and hear Yoon calling for Seo several times, “Assistant Manager Hong!” and then randomly questioning her, “When did you start wearing perfume?” But Seo simply retorts that she isn’t wearing any.

In the next text screen, we read, “A person whose five senses are abnormally developed.” Cut to Yoon Kye-sang quickly stepping in to catch Seo Ji-hye when she falls backwards. He nags, “I told you over ten times. As a PM, you need to prepare for what could happen in all possible scenarios.” Enter Kim Ji-suk who suddenly appears before Seo, saying, “I came back. I mean, I missed you.” Extending his hand, Kim tries to make peace. A distracted Seo gets saved by Yoon in another almost accident, which perplexes him. “In the five years that I’ve known you, do you know that you’ve been acting like a completely different person these past few weeks?” Catching the sound of her heart racing, the teaser closes as Yoon asks Seo, “Do you like me?”

I know Yoon Kye-sang was in G.O.D which was part of JYP, but man he looks so much like Jinyoung (Got7) in that still/wearing the black glasses. I like Seo Ji-hye a lot, she's very elegant and yet can be a hoot when she leans in her comedic chops.

I wonder if this will be another Disney+ original where they squander the potential for popularity/viewership by making it only Asia exclusive. Their tactics don't make much sense, considering how they do a better job promoting their Western contents.

Glad I'm not the only one who thought that looked like Jinyoung. I was like- wait, how did they age-up Jinyoung to play a younger Yoon Kye-Sang? Then I realized it was YKS in all the scenes! :O :O

Its so uncanny lol, esp when he wears the black frames?

Also Yoon Kye-sang deserves a bit of recognition in terms of being a part of a famous idol group, and transitioning well into a multi faceted actor since. One of the OGs!

Kim Ji-suk as a second male lead? After MMH, landing this kind of second lead role is even...more cruel. ' A future with Cha Min-joo ' = A love struggle we know has already ended before it began. I do love the supernatural elements.

I know, right? He is so often cast as 2nd lead. They're wasting a huge talent.

His kind of second lead should have his own love story, instead of fighting for the FL. Just like we had in My Unfamiliar Family. I've seen his lead characters dramas and he's good. They're really wasting his talents.

It’s a little tricky with KJS. He always steal scenes when he is a SML, but I seems like he doesn’t have that kind of luck with general male lead roles. He was wonderful in My Unfamiliar Family, but that’s probably also because it is more of a whole cast show instead of the traditional OTP show. If I remember it correctly, before MMH he had 20th Century Boy and Girl, right? Somehow I didn’t finish that drama. Perhaps with his outstanding talent, he is blessed more in great SML roles?

This premise sounds like a disastrous mess…I’m totally into it. Except for Kim Ji-suk as the second male lead. We as a society have evolved past the need for SLS. Just give him an alternate love story ffs. Seo Ji-hye is so pretty. I would watch anything with her in it.

"We as a society have evolved past the need for SLS."

Well said! Love triangles if used well can be fun, but most of the time its time consuming and takes away from seeing couple/romantic moments as a result. 16 episodes to show that imo is not enough. The irony since news of Park Min Young's new show is rumored to have a love triangle. Just give SL's alternate love stories pls!!

I think the weirdest plot with magic kiss was the Japanese drama "Todome no Kiss" but it was really good. I loved the relationship between the leads.

This one looks fun and sexy. The actors are good and I really liked the fact they're not too young. He's a CEO looking like a CEO!

Kim Ji-Suk is too good to be a second lead :( But after Monthly Magazine Disaster, I guess it could be an opportunity.

Yes Todome no Kiss was fantastic! The premise would be a bit much for a kdrama, but it was perfect as a jdrama.

100% true on Yoon Kye-sang actually looking like a believable CEO. Always laughably funny whenever they cast twenty-somethings to play such high-ranking people.

I'm happy to see lovers of Todome no Kiss here! This drama was a little gem.

Agree that Todome No Kiss was really good! It was the amazing OST song Sayonara Elegy that made me look up the show and I watched it along with Todome No Parallel. Which then led to consuming a lottt of Yamazaki Keno content.

The OST was good and his role in the drama was funny. I like Yamazaki Kento, he has an interesting career.

I don't know there is Kim Jisuk in it. Suddenly excited
But it is Disney
Convoluted

Very happy to see YKS in a light romcom finally but sad for KJS as 2nd lead again, why why why?

Ugh didn't know Kim Ji Suk was in this. He looks so hot with his 'stache~ I wish he'd be the lead in a (good) rom-com soon.

There was Top Star Yoo Baek . Very cute and sweet rom com though I think only about 20 people saw it :)

I did watch part of that, but never finished... mostly due to the lack of Eng subs. >.< The subs I read were iffy too.

Logging on here after more than a year just to say:
I also see my future with Yoon Kye-sang... when is it going to start already?
The cast (except Yoon Kye-sang, I haven't seen him doing comedy) looks super funny, I am sure that their comedic timing will be impeccable.

I hope Kim Ji-seok gets his own love line, or whatever actual plotline that makes sense. It's kind of bittersweet to see him back on my screen but as a second lead.

On another note, Yoon Kye-sang looks so good, like, it practically breaks laws to look that good.

I cannot watch a single kdrama on disney other than Snowdrop - I am in the US. Are they available here?

I would really watch Yoon Kye-sang in anything even if it's a total mess, but dear drama gods let this be on a streaming service I can acces!

I am reading the Webtoon currently and it is pretty good. And the whole romance is super cute (and hot). I love the ML character in the webtoon and I LOVE Yoon Kye-sang. However, both the actors look older than their webtoon counterparts (that is actually good for ML and hope this means the FL is less silly in the series).

I don't get why they are wasting Kim Ji suk on second ML though. So far in webtoon the character is just a prop. A generic ex, who was not shitty but not memorable either. Unless the story turns his character into something more or the series changes his role, it is a waste.