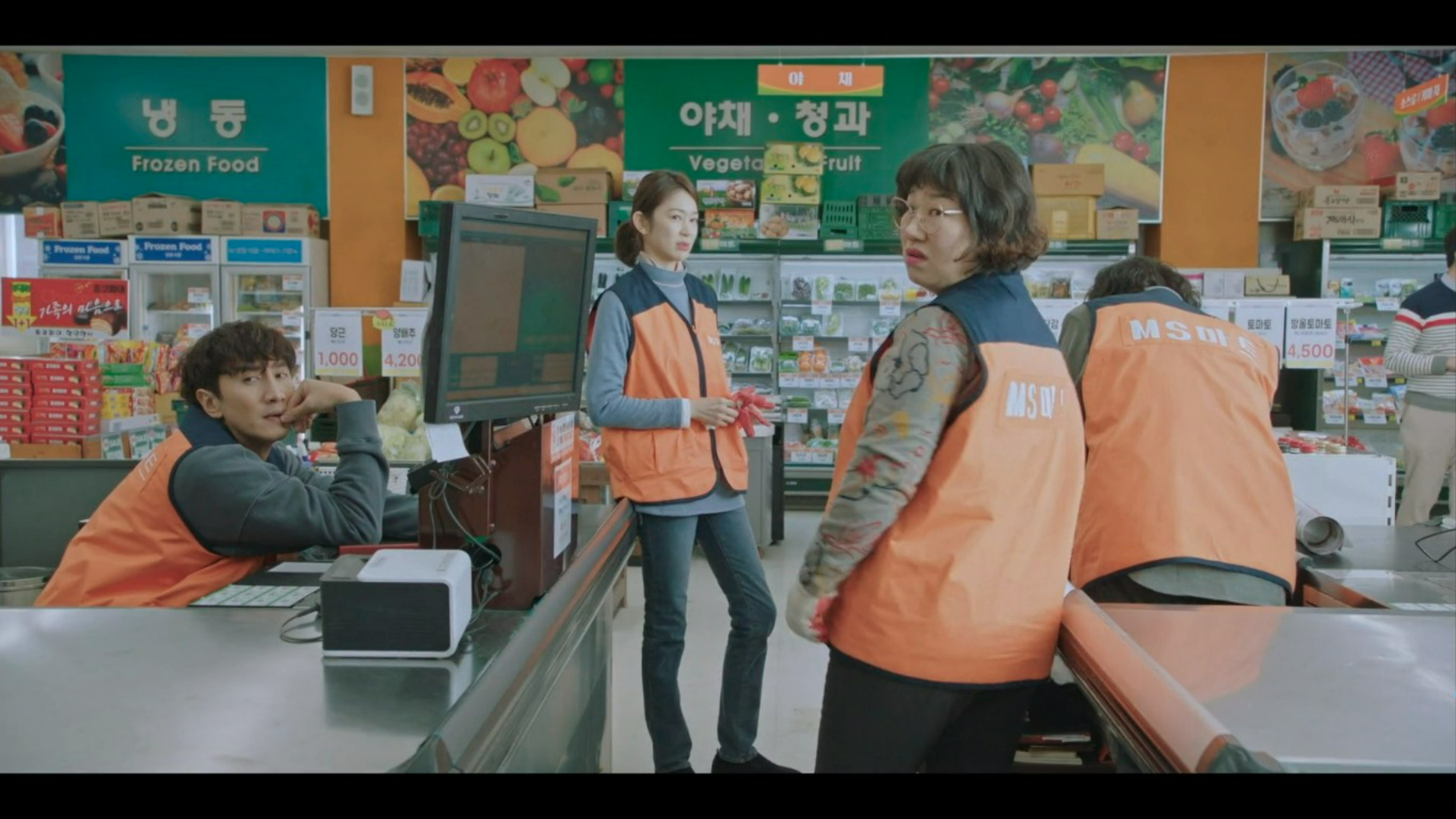 The crime comedy The Killer’s Shopping List gets off to a surprisingly leisurely start, introducing its cast of characters and the neighborhood they call home. Although it takes place in Seoul, the vibe is more small town, at least with regards to the mart at the center of our story. Our family mart has already had its claim to fame due to a brush with a criminal in the past, but it looks like a more serious crime is headed their way. 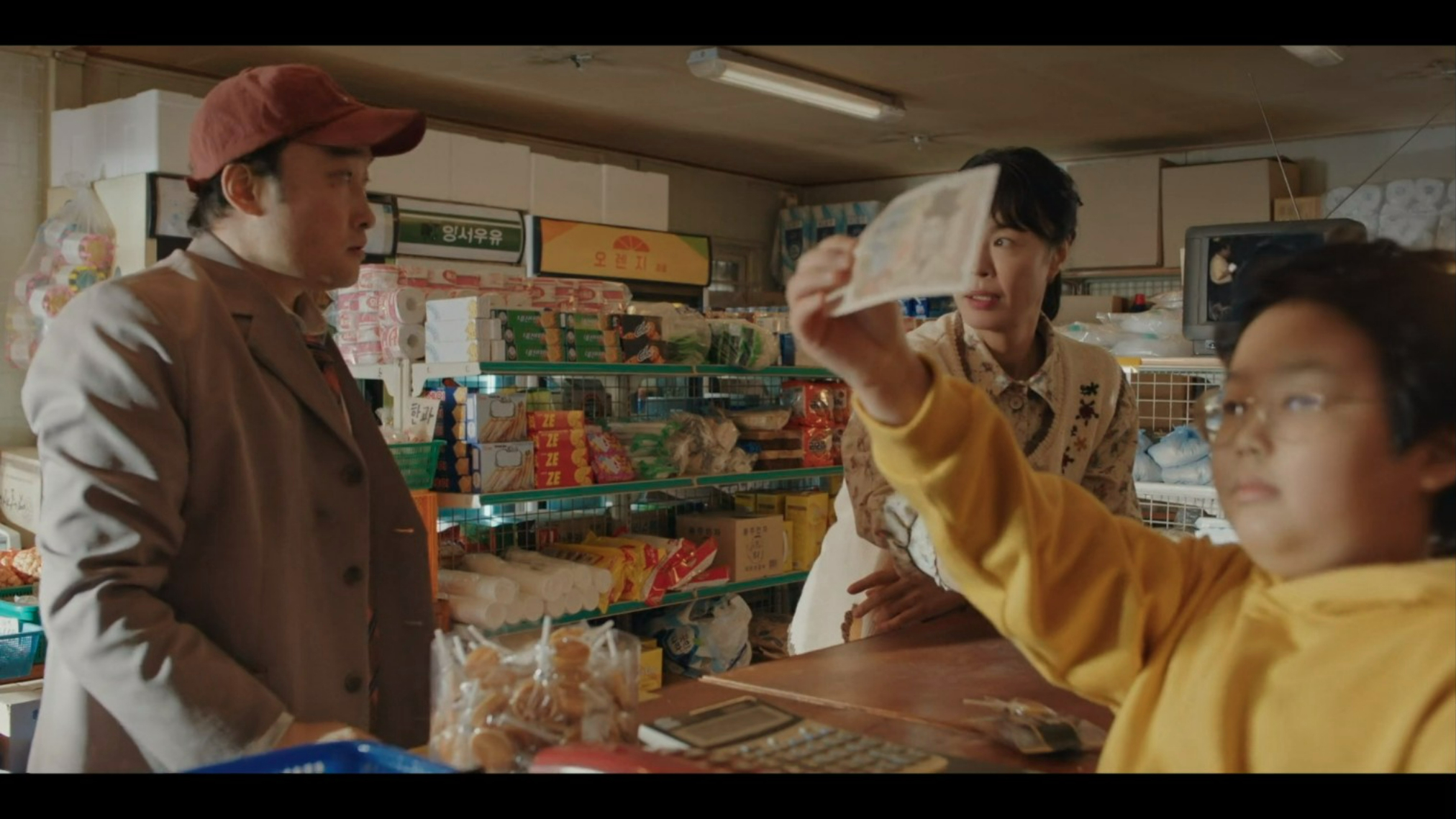 I sort of expected us to jump right into the action given the short episode count of this drama, but the premiere episode was primarily setup. I can’t say the drama’s style is for me – most of the humor didn’t land with me, and the slow pace isn’t what I prefer in a crime/mystery comedy. But once the action starts, I can see things getting interesting because the premise is fun.

The episode opens on Daesung Mart in 1996 where a shifty, nervous man uses a crisp, new bill to buy a choco pie. Unfortunately for him, the shop owner HAN MYUNG-SOOK’s (Jin Hee-kyung) young son is observant and realizes the bill is fake by its suspicious serial number.

The boy is set on bringing the man to justice and locks him inside the store… with his mother also trapped inside. The kid runs off to the police station, sure his mother can take care of herself until he returns with an officer. And the kid is right. Myung-sook, a former athlete, manages to fight the man off and take him down on her own. As the criminal is dragged out of the store, he ominously tells the kid that he’ll see him again. 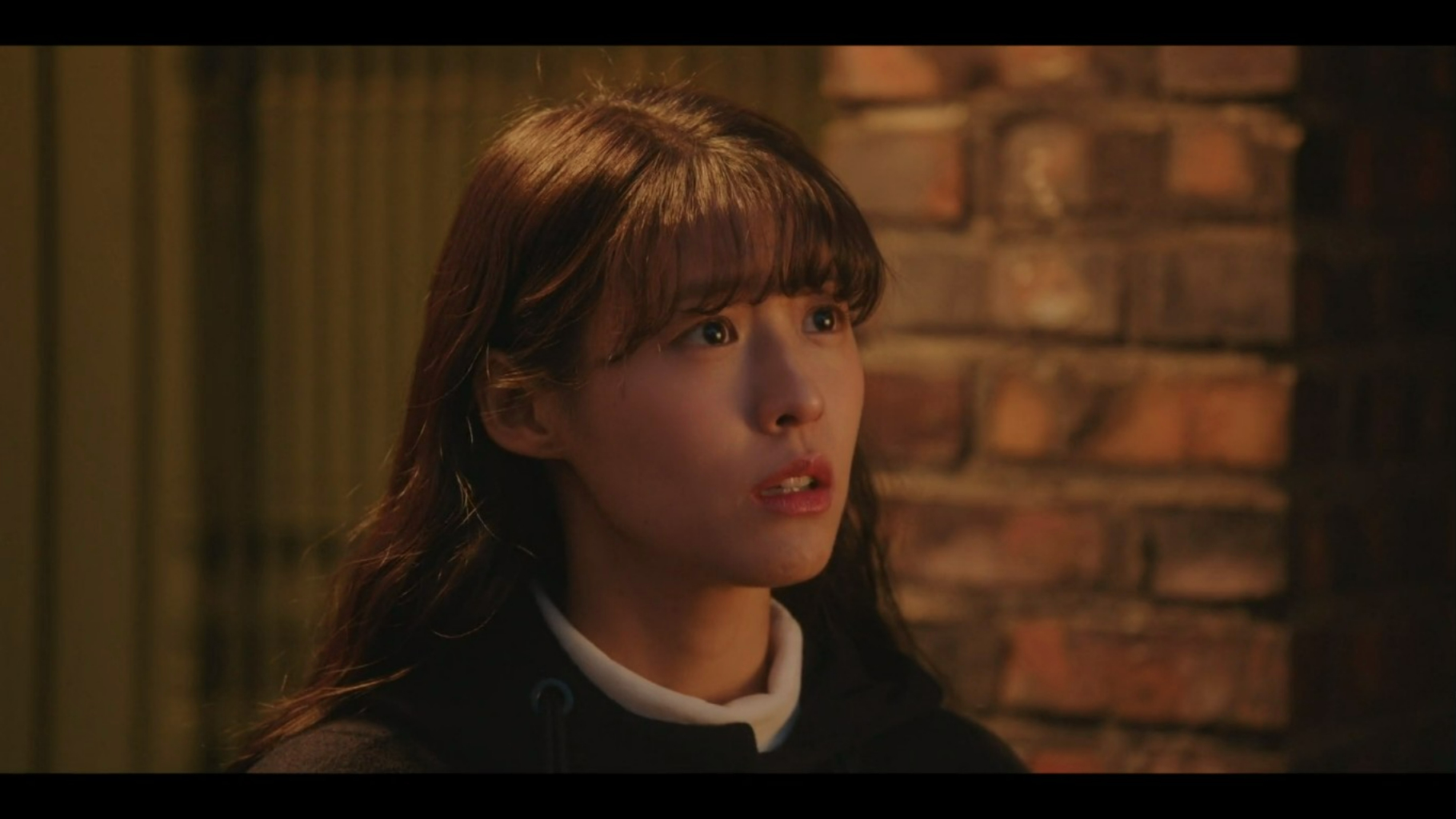 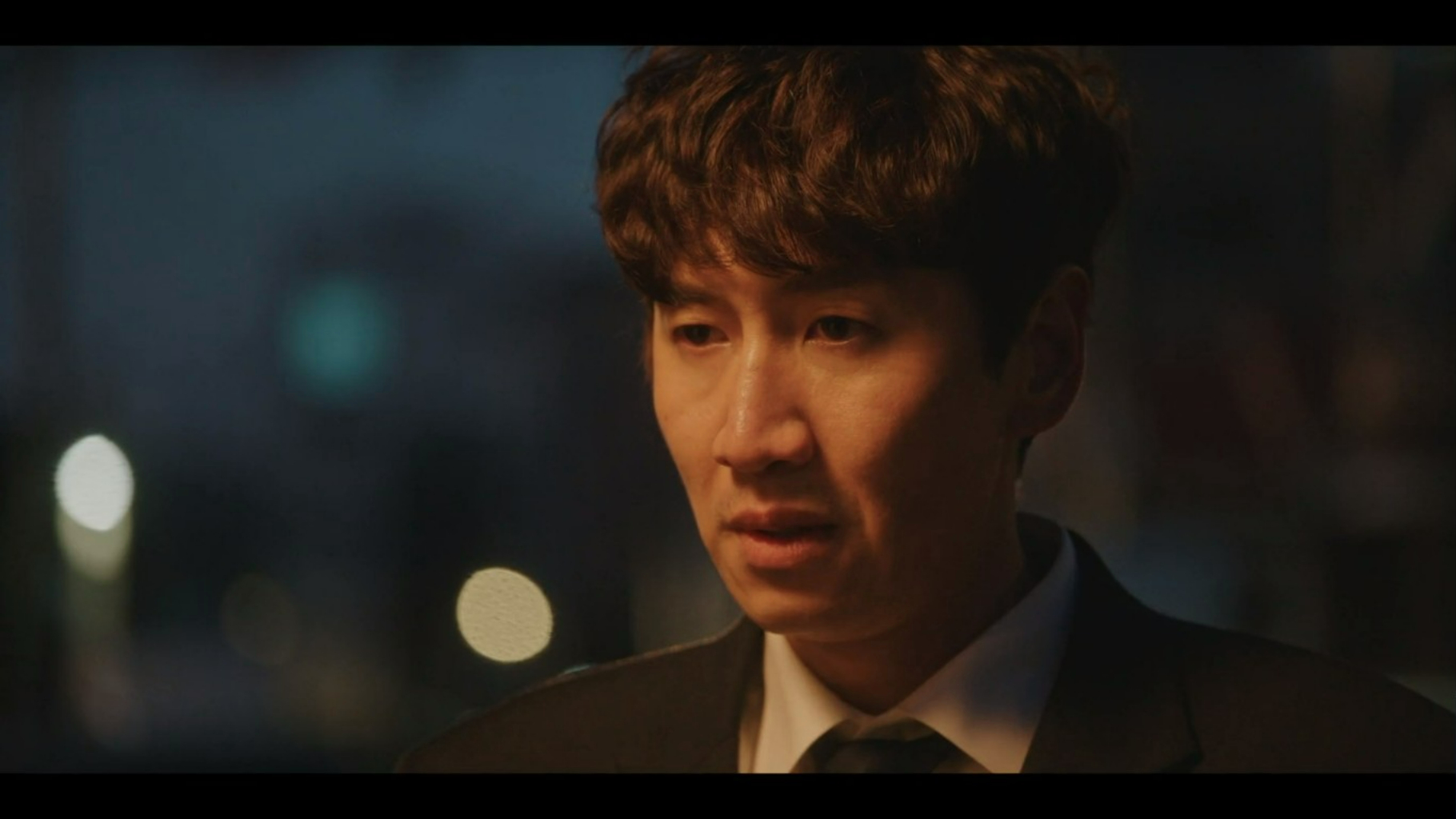 Now grown with a lifelong distaste for choco pies, AHN DAE-SUNG (Lee Kwang-soo) continues helping his mother run their mart, although it’s undergone quite a transformation. Over the years (and with a little help from the significant publicity for catching a counterfeiter), Myung-sook turned it into a full-blown supermarket.

Although Dae-sung’s father helps at the store, it’s clearly Myung-sook who runs the show. She’s tough, hardworking, and not content to let her husband or son loaf around while she does all the work. While Dae-sung helps out at the store, he’s also been studying for the civil service exam with no luck. After years of studying and failing, he’s finally calling it quits.

Little Dae-sung was dedicated with the single ambition to protect his family’s store, but grown Dae-sung is struggling to find a sense of direction. He’s been on-again, off-again with his long-time girlfriend and police officer DO AH-HEE (Seolhyun) whose father is fed up with Dae-sung’s lack of future plans. She’s had enough, too, and says she wants to meet other people, but she does seem to still have feelings for him. 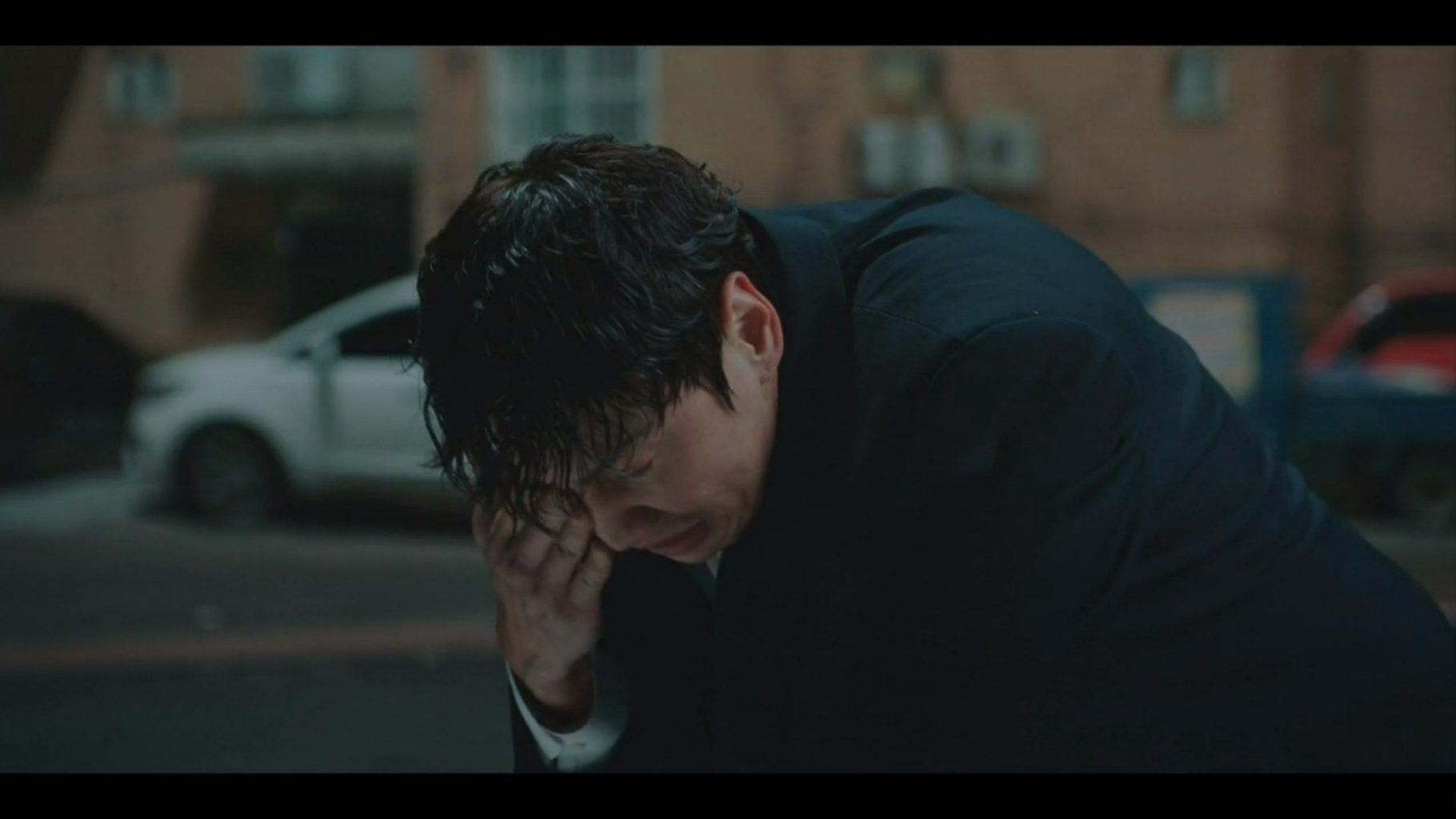 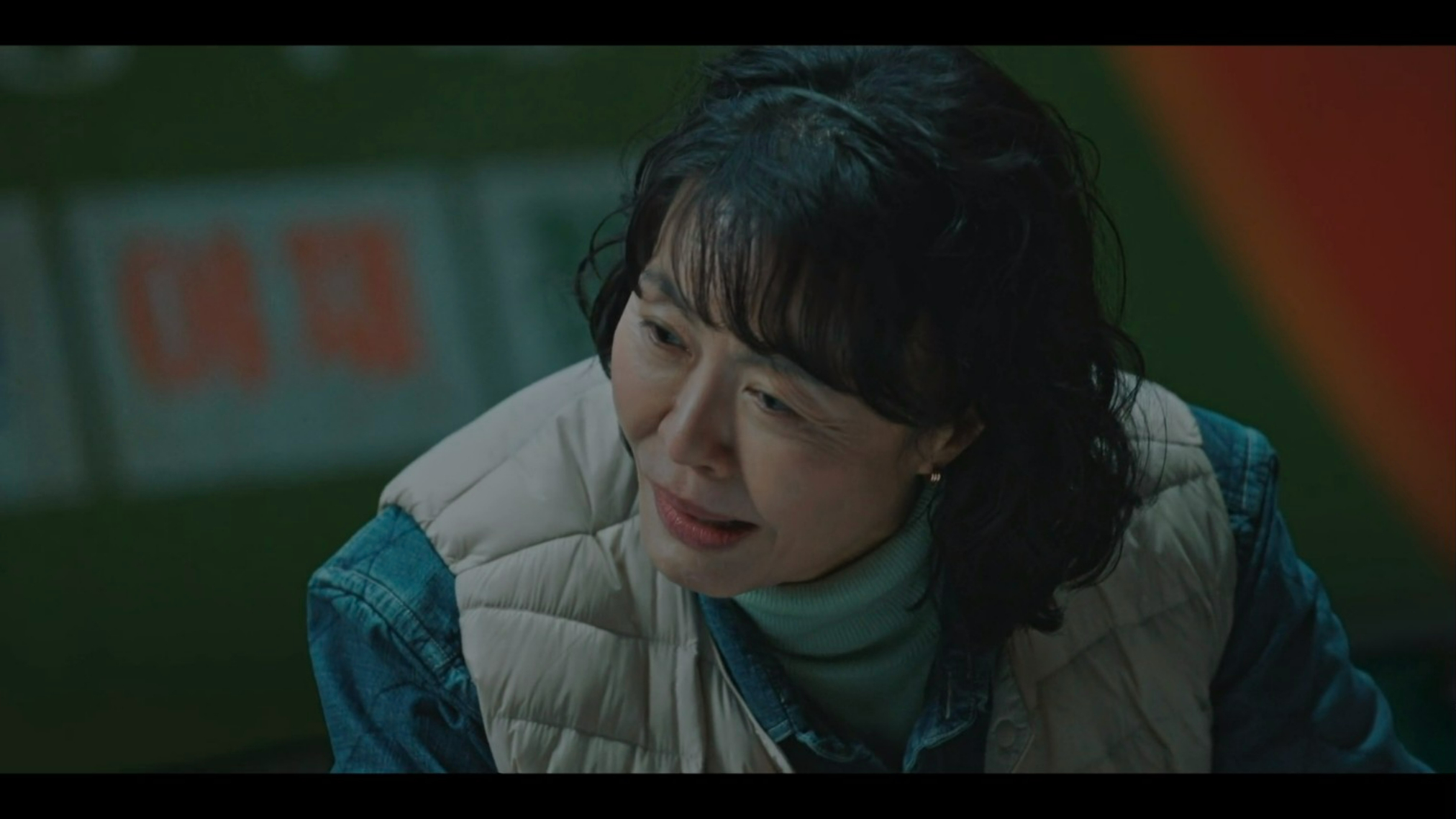 As Dae-sung sadly walks home in the rain after packing up his stuff from the goshiwon (small dormitory), we zoom in on a pink slipper on the ground. I’m going to guess that’ll be important. When Dae-sung gets to the mart, he sees his mom switching out the “Daesung” part of their mart’s sign for “MS.” He starts crying, thinking his mom sold their family business.

It turns out she’s just rebranding … with her own initials. What did he ever do to earn the mart being named after him? Ha, I like this woman. Then she proceeds to kick him out for freeloading. They come to an agreement – he’ll work officially for the store in exchange for living in the small studio they’re using for storage. 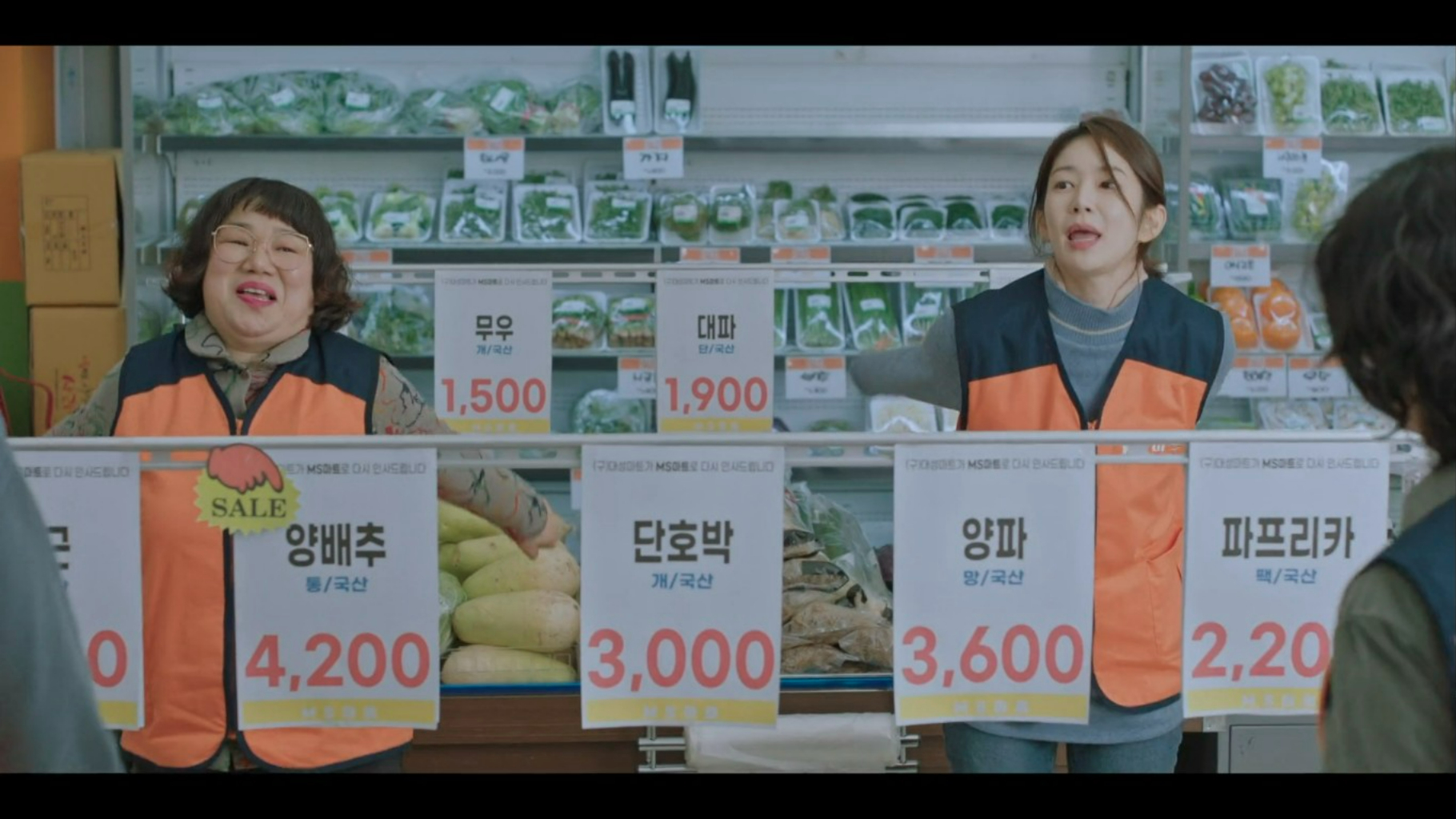 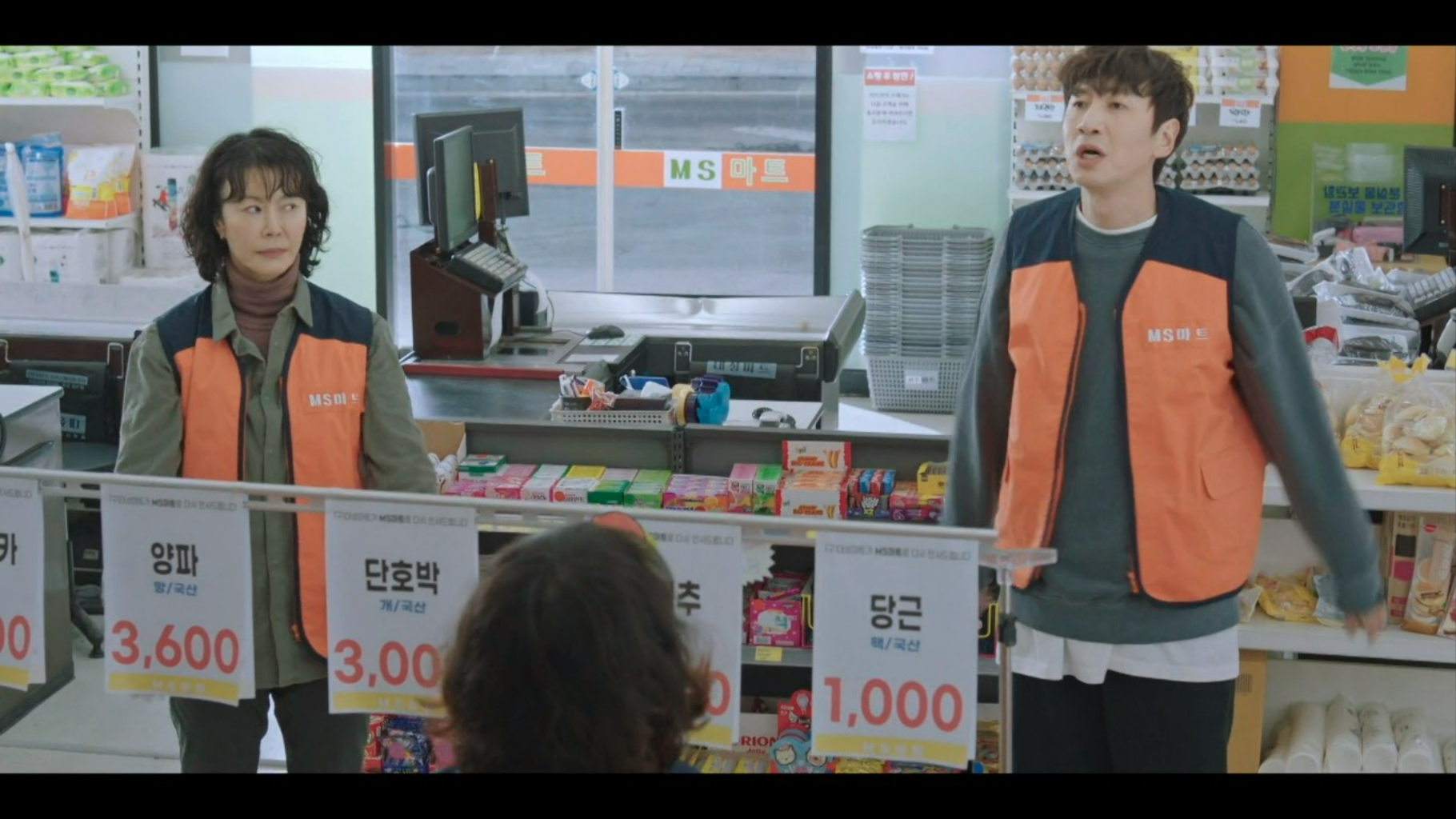 Myung-sook later admits the store is having financial troubles thanks to their nemesis Bae Mart, and they have a month to get their sales up before they’re really in hot water. Dae-sung, now an official employee, vows to help keep the store afloat. Needing more help, Myung-sook also reluctantly hires an ex-con her cop friend convinces her is a good kid despite his issue with theft.

Although he’s never been a paid employee, Dae-sung has helped out around the store his whole life, so he already knows all the employees and most everything about the store. Dae-sung has a great memory for details, which means he remembers all their customers. That comes in handy when a little girl brings that pink slipper into the mart to their lost and found. 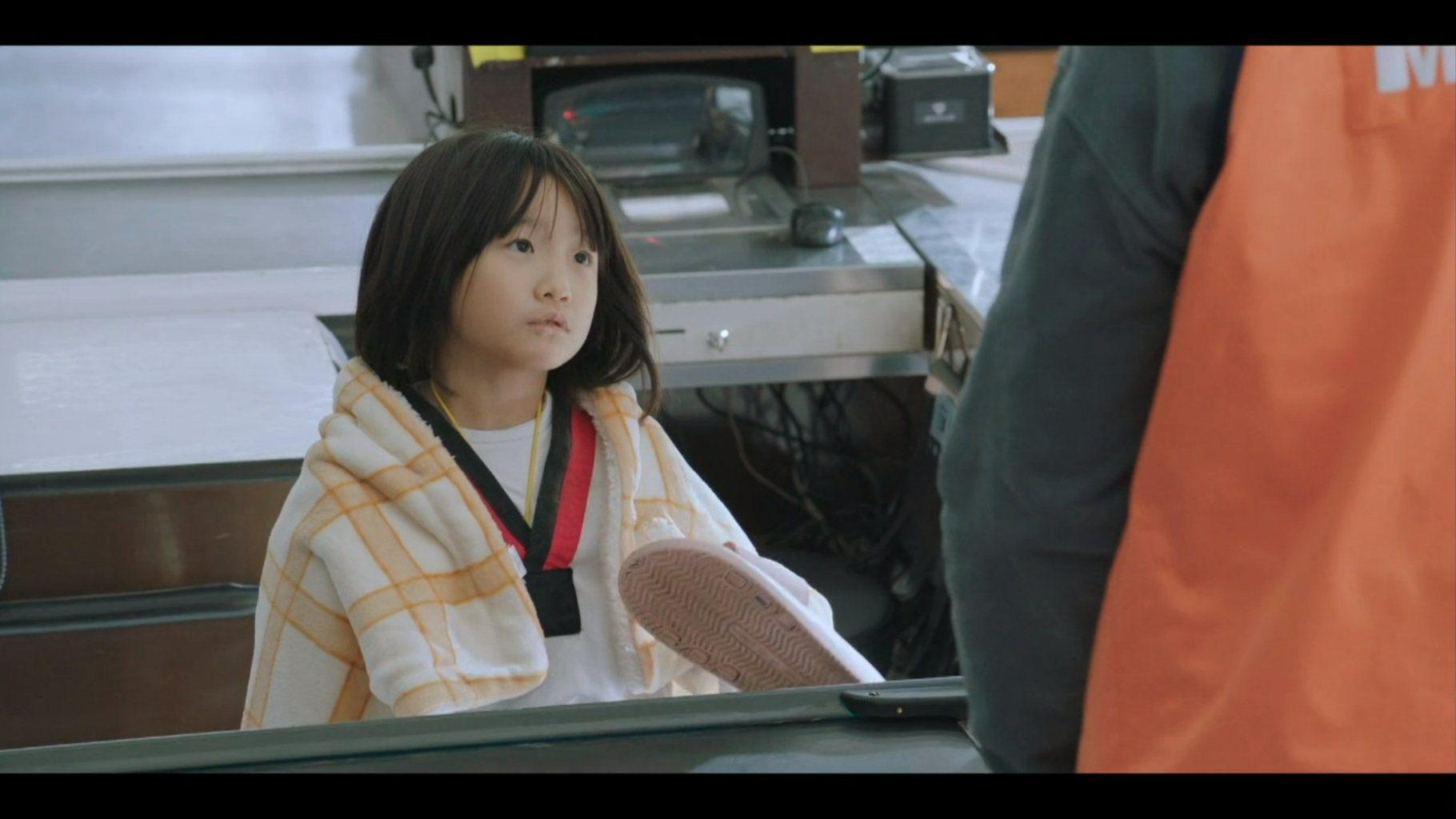 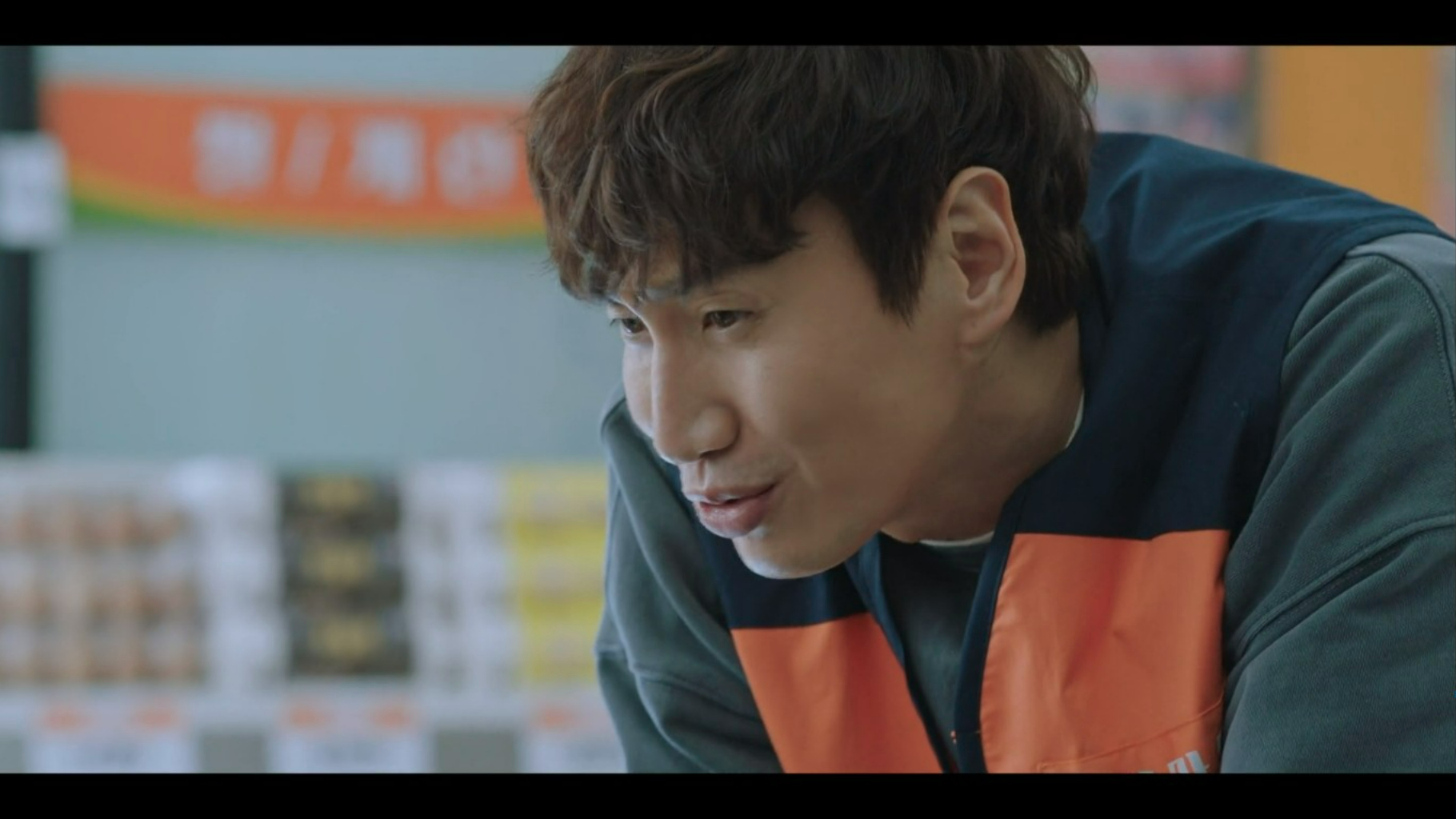 At a glance, Dae-sung knows who owns the slipper and even where she lives. He takes it along with him on his delivery, but there’s no answer at the woman’s apartment. Outside Dae-sung ends up arguing with an antagonistic elderly man who accidentally throws his num-chucks into the woods. Dae-sung runs over when he hears the man scream and sees the woman’s body. And we have our murder.

Next to her body are what look like pills and a couple of choco pies, which have really been a theme. We even flash back to all the times they’ve been featured. Several years after the incident with the counterfeiter, Dae-sung found a box of them in their store with an “I’ll be back” note attached. Lately, there have been strange deliveries supposedly from Dae-sung MS Mart that always contain a choco pie.

All signs point to the choco pie swindler being involved somehow, but it seems too easy for him to be the murderer. Maybe he’s got a neighborhood accomplice. The episode ends with Dae-sung and his elderly neighbor frenemy both on the ground, screaming their heads off at the sight of the body. 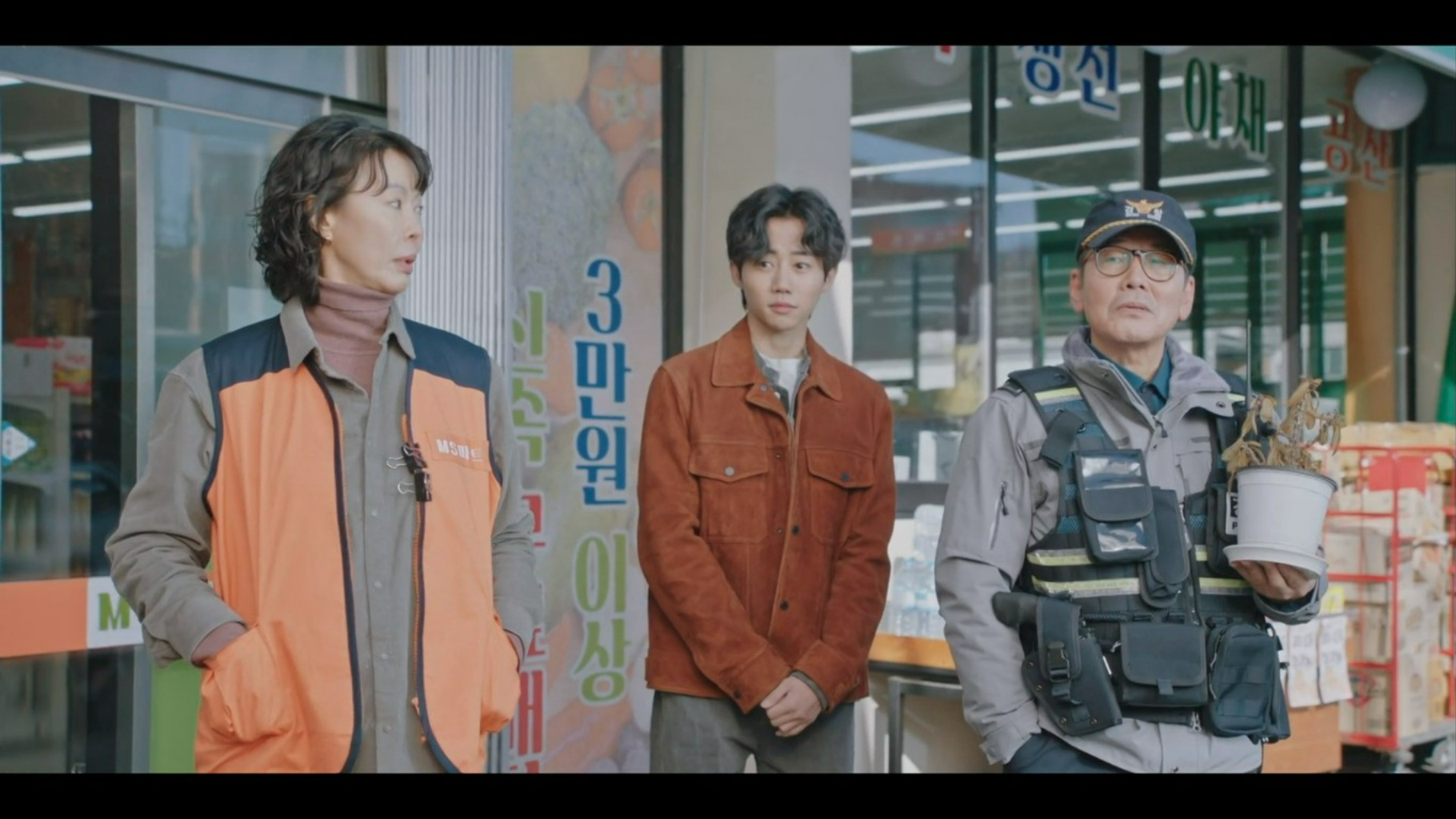 I like the idea of this drama more than the execution of it, at least based on the first episode. My main issue is that I feel like the hook is missing. While the characters and the scene were well set up, the mystery/crime aspect didn’t grab me at all.

From the description, we know that MS Mart will be involved in the murder, which means Dae-sung, Myung-sook, and maybe the whole mart will join in the investigation. Or perhaps they’ll be suspects. I can see that being fun either way, but I wish the first episode had given me a taste of it. Because while I didn’t dislike the premiere, it didn’t leave as strong of an impression as I’d hoped. 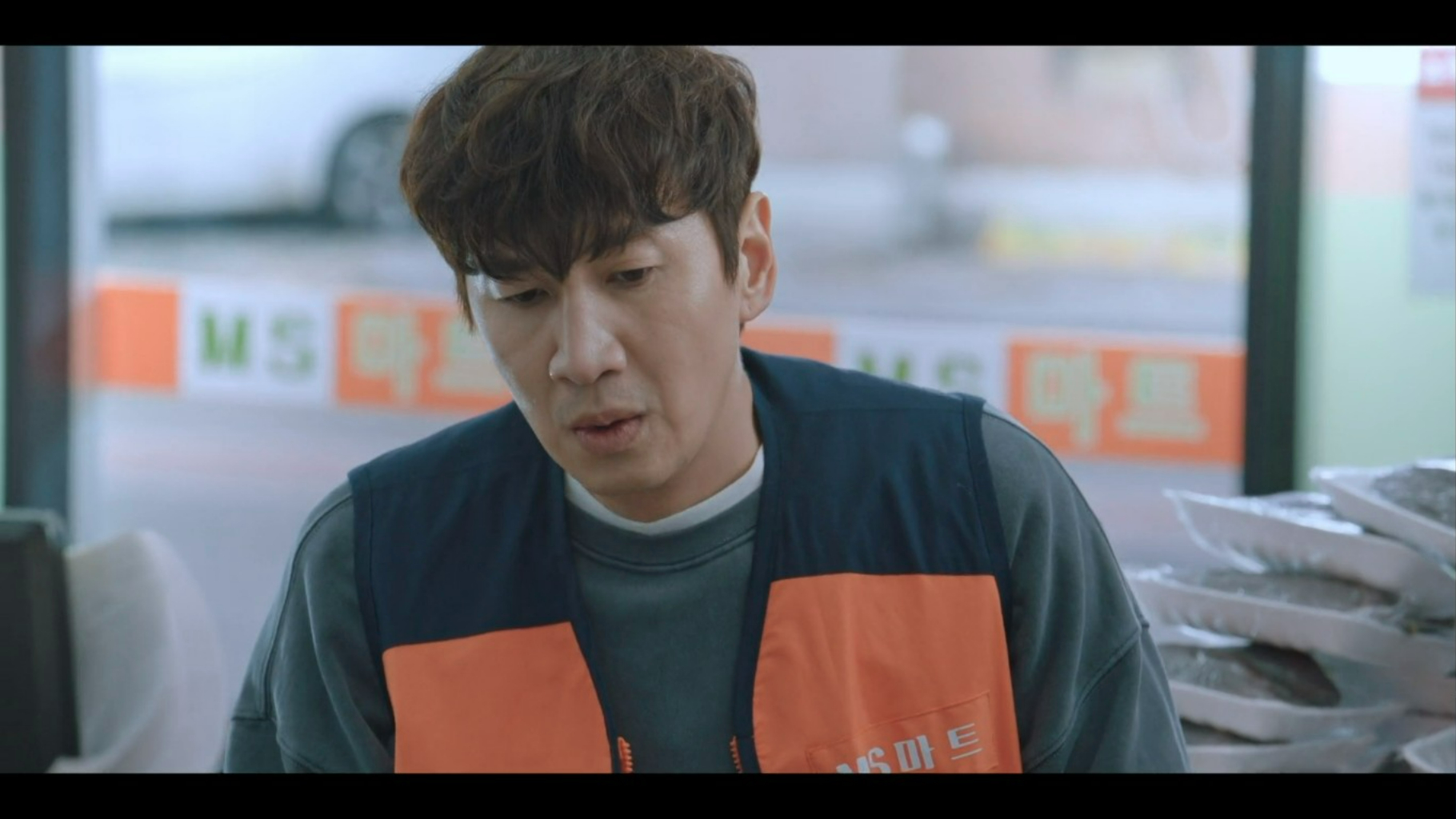 I was glad to see Lee Kwang Soo back in a drama, but I’ll be honest, the first episode didn’t grab me either. The idea itself is pretty interesting, and the characters aren’t bad, so I’ll give it at least another week. Did pick up a bit in the 2nd episode but if I was going off just the first one, this would probably be one of the rare shows I’d drop after one.

If you’re on the fence about checking this one out, maybe give it a week or two till there’s more episodes out to let it stretch it’s legs more and see what other folks are saying. There’s just so much to watch right now it’s hard to recommend this over…nearly all the weekend shows.

I liked how Dae-sung uses his intelligence to resolve things. I think he didn't realize what he did when he locked up the criminal with his mother and was scared for a moment. In the second episode, we can see that this story is not over.

It's kinda a "behind closed doors" story but with the mart as stage. The second episode was better.

I loved it. It's just my style. Obviously this is a mystery but it's much more about Dae Sung overcoming his trauma from the past so he can reach his full potential. I like the mart as the setting.

For an 8 episode drama, I was expecting the first episode to be catchy. So I was a bit disappointed. The second episode was better but the show is barely holding my interest. I am not sure if I will keep watching tbh. I love a good murder mystery but there is just something lacking. Maybe I will tune in for episode 3 to see of it will get better.

I thought the first two episodes were done well. The humor is low key which fits into the murder mystery main story line. I like how the show started off strong in Dae-Sung's childhood and his unique abilities. I liked that the neighborhood changed over the years but Dae-Sung did not (which frustrates both his mother and girlfriend). This is a role tailor made for Lee Kwang Soo. I enjoyed the first two episodes.

As described here by most Beanies, I didn't find the first episode all that spectacular. It seems to have all the elements though, so perhaps it's just a case of the drama not finding its rhythm, so to speak.

I enjoyed it so far, and ep. 3-4 made things even more interesting!