New promos have been released for SBS’s upcoming legal drama Why Her? including posters and a video teaser.

Driven by what happened in the past, the story has Seo Hyun-jin (You Are My Spring) as a callous and ambitious lawyer who is determined to rise to the top of her field. When a setback forces her to take on a teaching position at a law school, there she encounters law student Hwang In-yub (The Sound of Magic). Even if the world is against Seo, Hwang resolves to stay by her side and protect her at all costs.

The newly released teaser begins with Seo Hyun-jin putting on her game face and proudly walking through the press as she declares, “The first female managing partner in one of the top ten law firms in the nation. My dream is to go all the way to the very top and I’m halfway there.” Newly appointed as a law professor, Seo introduces herself to the class by writing her name on the chalkboard – drawing the attention of both Hwang In-yub and Bae In-hyuk (At a Distance, Spring Is Green).

We then cut to Seo Hyun-jin taking a phone call while splattered in blood and a woman cries, “You killed my older sister!” Seo meets with Heo Jun-ho (Snowdrop) afterwards, defending her situation to him, “My weakness is your weakness as well.” The two shake on the deal and Heo tells her, “I will give you a taste of career success and power that you haven’t had before.”

But Hwang In-yub worries over Seo Hyun-jin, “Why is this happening to you? What kind of world do you live in?” and confesses that he likes her. When the school bulletin is vandalized with hateful posters of Seo Hyun-jin, Hwang and Bae In-hyuk work together to take them down. In a final sequence, we see Hwang running after Seo while Bae appears upset. Meanwhile Heo sits in his office with a drink and we end on a smug Seo Hyun-jin who says, “Did you really think you could become a match for me?”

Written by Kim Ji-eun and directed by PD Park Soo-jin, SBS drama Why Her? premieres next month on June 3. 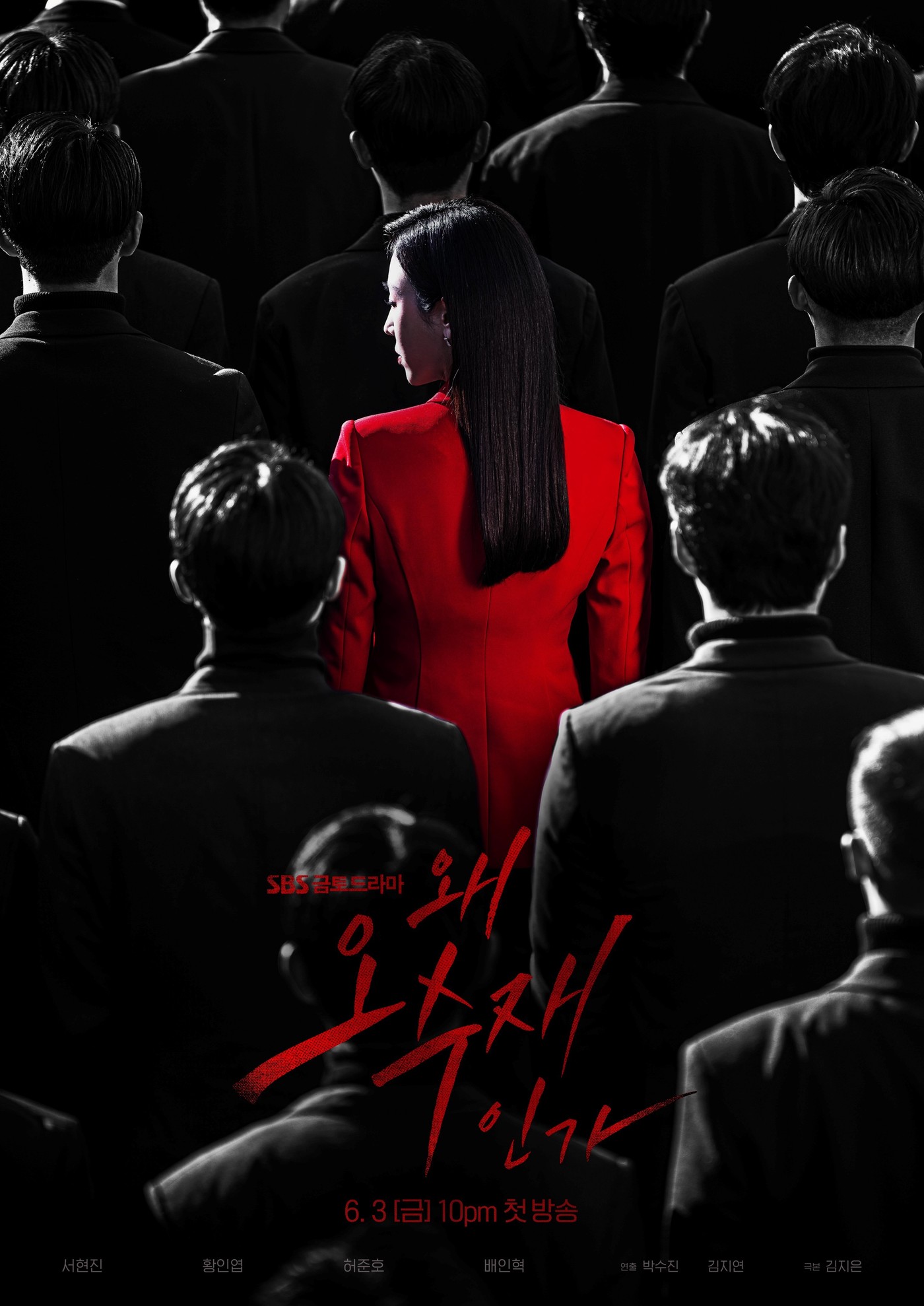 God, this would be so up my alley if not for the deeply unethical teacher-student romance. Why couldn’t they have just had a regular mentor-mentee dynamic? WHY??

College and Grad school dramas and movies always feature that stupid plotline for some reason.

I understand having and using artistic license/liberty, but i imagine most people who choose to go to university, especially something as expensive as Law school, do so to study and not to sleep with their teachers.

100% agree. I hate that element so much I will probably not be able to watch this, even though everything else sounds great. 😠

If I am not wrong from early part of synopses GC and SJ meet each other 10 years ago in a case that made her demoted to work as adjunct professor at the law school. He is a ex convict so he is older than his peers and he also own a bar that gave him money to study law.
They have connection from the past, so I suppose this gonna connect them again meeting at the law school.

This teaser is like a mash-up between Law School, SKY Castle, and Melancholia. I'm ready for Seo Hyun-jin's delicious revenge.

I'm in love with Bae In-hyuk in the teaser, so as long as he's not in a love triangle with Seo Hyun-jin and Hwang In-youp, I'm good.

Oh I just know we’re not gonna be lucky enough for that. They’re already going for the student-teacher romance angle, so I have no hope they won’t rope in a dubious love triangle as well. God this pains me.

4 neener ~ Inside the Magic Shop ~

I'm loving the cast but the plot..... We shall see and I have too much on my plate so it'll probably for a binge watch or depends on the final review.

I'm really excited for this! I've been waiting for this drama for some time now, since its released was postponed from May to June. I've been watching Seo Hyun-Jin Unnie's videos on youtube very randomly. hahaha. like the Vogue interview and the radio guestings. hihihi. Missed SHJ unnie so much. hehehe Can't wait for this. ^_^