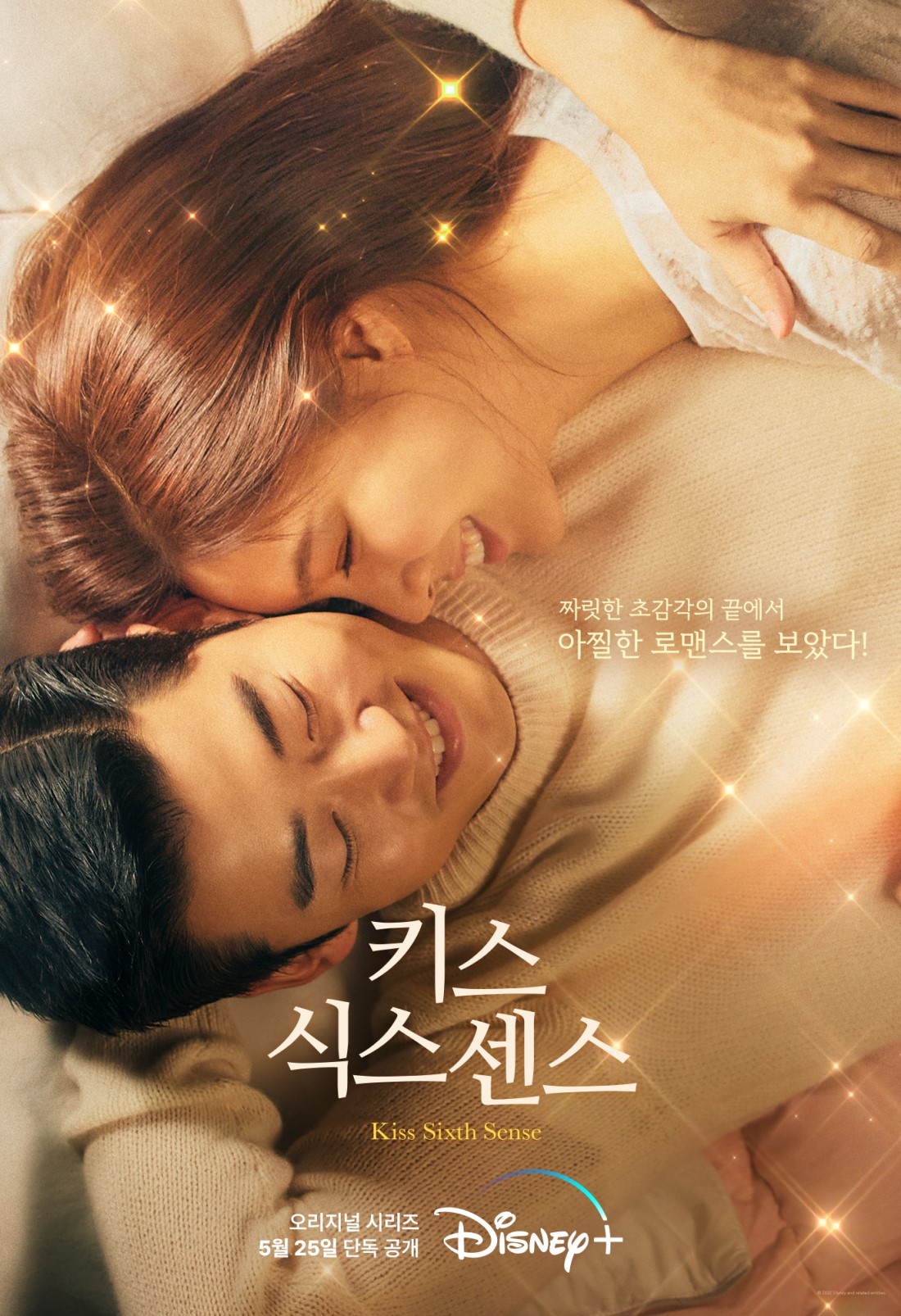 In less than a week we’ll be treated to Yoon Kye-sang (Crime Puzzle), Seo Ji-hye (Dr. Brain), and Kim Ji-suk (Monthly Magazine Home) gracing our screens, and in the lead-up, new promos have been released for Disney+’s fantasy Kiss Sixth Sense.

Yoon Kye-sang stars as a man with extra-heightened senses, making him overly sensitive to everything he sees, hears, smells, tastes, and touches. Enter Seo Ji-hye, who can read someone’s future if they touch her lips. Although in different ways, the two have suffered from having their abilities affect their relationships with others. And this seems to have held true when Seo was dating ex-boyfriend Kim Ji-suk as well. Now she’s poised to possibly, maybe get into a relationship with Yoon. But the situation gets complicated when Kim suddenly appears, wanting to be a part of Seo’s life again.

The newly released teaser begins with Yoon Kye-sang reprimanding his staff for treating their work like a college group project. Seo Ji-hye curses to herself that Yoon is a crazy jerk. But we then get dramaland’s quintessential accidental kiss, leading into the next sequence. Glimpses of Seo Ji-hye’s future visions are mixed in with scenes from the past and the present, and we’re introduced to our three actors: Yoon Kye-sang, Seo Ji-hye, and Kim Ji-suk.

Returning to Yoon Kye-sang in another meeting, he tells the team to just resign if they’re not going to do better. Hwang Bora (Dal-li and Gamjatang) sadly admits that Yoon still has the best specs at their company and another woman agrees that he’d be perfect if he wasn’t so scary. When Yoon asks Seo Ji-hye if she’s sure about her ad idea, Seo explains to Hwang afterwards, “It doesn’t matter what I do because that jerk will never be happy with it anyway. I’ll get in less trouble if I lower his expectations with something decent first and then elevate it to something better after.” Seo still curses Yoon, though, when he lets her trip and fall.

A teary Hwang Bora questions how Seo Ji-hye knew what would happen and is reminded that she can read the future. In the appearing text screen and in voice-over, Seo explains, “I have a sixth sense. When my lips touch someone else’s body, I can see their future.” In disbelief over the vision of herself and Yoon, Seo confides in Kim Ga-eun (On the Verge of Insanity), who is shocked but amused that Seo has slept and/or will sleep with Yoon Kye-sang.

Meanwhile Lee Joo-yeon (Hyena) worries over a sick Yoon Kye-sang. “What happened? Who was it this time? That’s why you’re sick, right? Tell me who it was this time! Do you think I don’t know? You were like this when we kissed that time too!” Back at work, Yoon nitpicks at the wobbly set and bad smells that only he can sense. He’s right about the set, though, and ultimately injures himself while trying to save Seo Ji-hye.

Seo Ji-hye starts to accept that her vision is coming true and the next text screen reads: “I’m going to date my jerk boss?” Going back to denial mode, Seo tries to convince herself that it’s all just a coincidence. Kim Ga-eun strikes her down, “Just sleep with him. Just do it. Was there ever a time when your vision didn’t come true? Don’t you remember what happened before? Don’t you remember how you tried to re-see the future and ended up suffering because of it?”

This brings us to Kim Ji-suk, who has been hired by Yoon Kye-sang’s company and tries to get back into Seo Ji-hye’s good graces. But Seo is conflicted about their past: “At that time in my life, I wanted to avoid my future and tried to run away. Because the future I see is not always good. I live in the present, but my memories fill me with fear.”

In the final sequence, the intermittent text screens read: “Risky and passionate extrasensory romance,” “Man with five highly-developed senses,” “Woman who sees the future,” and “The first love who returned.” Yoon Kye-sang wonders if he’s suddenly cured because his senses seem to have calmed down, but he’s perplexed by Seo Ji-hye’s recent behavior as well. While Kim Ji-suk tries in vain to woo Seo, she’s more concerned about her maybe future with Yoon. She decides she needs to re-confirm what she saw and the video closes on her and Yoon’s kiss.

Premiering next week on May 25, Disney+’s Kiss Sixth Sense was written by Jeon Yuri (Radio Romance) with PD Nam Ki-hoon (Oh My Baby, Beauty Inside) behind the camera. 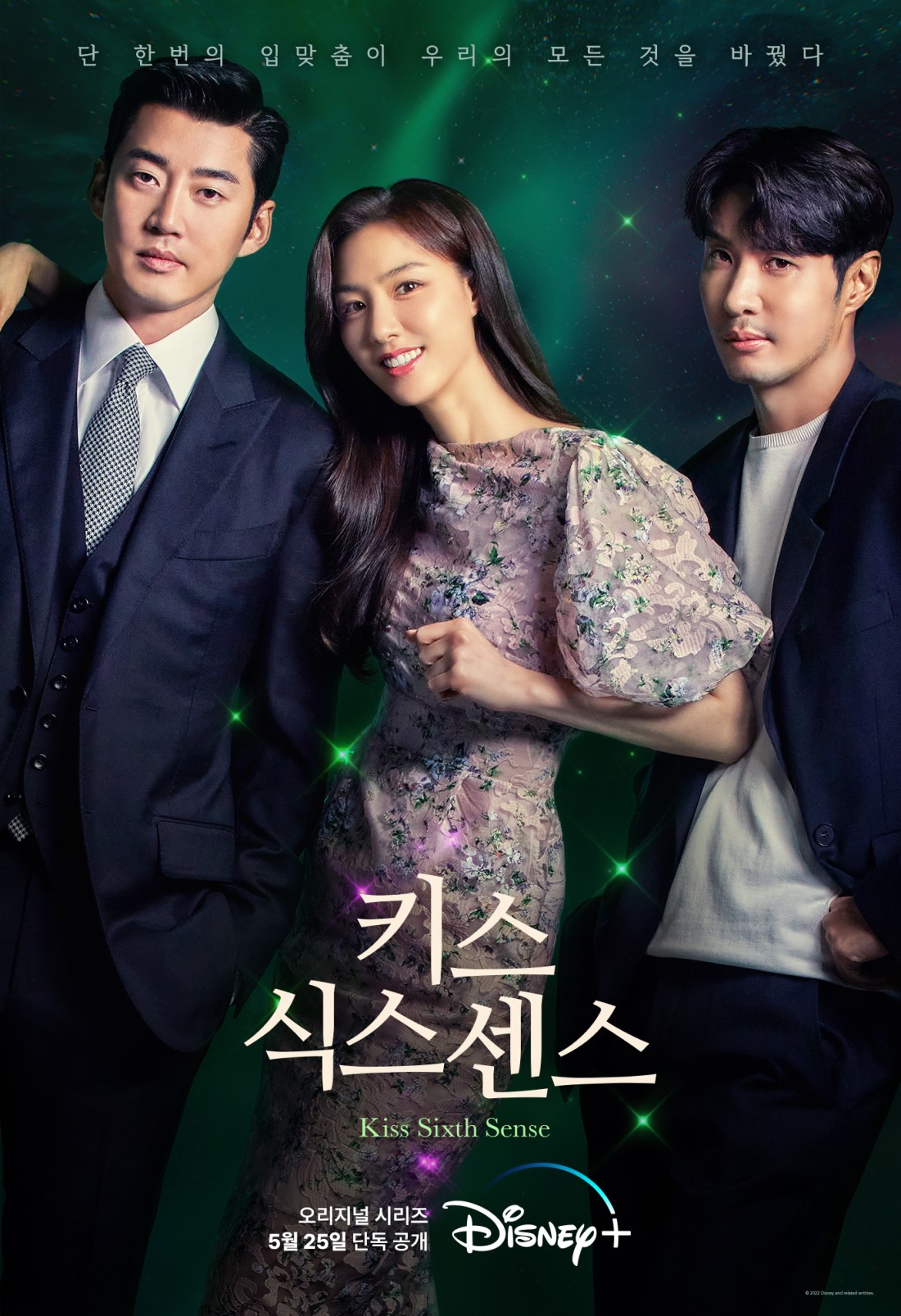 Forget the leads, could we just have a drama with Kim Ji-suk and Hwang Bora?

Another one on Disney+? At this rate I’ll never leave my VPN setting. 😂

Maybe its time for me to check out VPN.

This is going to be trashy as hell, and I’m so excited for it. But the 1 episode-per-week thing is killing me.

This sounds like something I'd see in a Chinese youth rom-com and quite enjoy. But with this group of actors, I find it disappointing. Also can someone please drag Kim Ji-seok out of second lead hell again 🙏.

Another show locked up by Disney+

This has the potential to be delightful trashy fun, but I'm going to wait until I can binge elsewhere.

I am all for delightful trashy fun. So, I will do the same.

The last picture still just bodes more sad emotions. There's no hope for Ji-suk at all. She's already poised on Yoon Kye-sang. I hope they don't drag this back and forth for a bulk chunk of the episodes. This SLS better not carry Start Up setup. Ji-suk better remain a jerk to Seo Ji-hye than a pushover. I don't think I can handle the torture.

My heart will break again if KJS follows the footsteps of Han Ji-pyeong. But I think shows now know better than doing something like that ever again (if they had watched the audience reception of the fate of HJP.)

It was completely disastrous, but they might not have predicted how KSH could weave his magic through HJP and made the character comparable to the ML.

I was soooo puzzled with this one bcs the original material is smth like Business Proposal ridiculous? But then Yoon Kyesang and Seo Jihye are not exactly that so... it's interesting and scary at the same time lmao

True, the opposite of Business Proposal, the characters here look way older than their webtoon counterpart. Not sure Yoon Kye -sang and Seo Ji-hye could bring the lightness needed for romcom to be enjoyed. Let’s see how much the production differs from the original source.

I was also wondering about the age part. Both Cha Minhu and Yesul are younger. (I am just hoping that FL being older will behave a bit more like a grown up woman with a past)

Exactly and so far in my reading the SML has not real role. Not sure how much they remain faithful to the original material though.

I've been reading the webtoon and vibe and the casting are definitely very different. Very calm and not energetic rom-com. Maybe it's just the posters and preview. The ABP teaser also gave off an off-kilter vibe, but when the drama was actually released, while it changed a few things to suit the drama format, it overall kept the webtoon vibe.

I hope the actual execution will work out well even if they change things around. I'm a little worried by the color palette in the stills. At least we have Kim Ji Seok and Hwang Bora to add some comedic splash.

This kind of color palette is something I associate with melodrama. 😂😂

Why this drama looks serious and melo? The teaser wasn't light and fun like I expected. This is not the vibe of the webtoon.
I should've stick to my rule of never watching teasers.

Webtoon is fun and romantic but has some serious backstory.

After today's episode I'm 100% this drama won't feel like the webtoon. The cast, the vibe, everything feels off.

Is it already released? What to do? I enjoyed the webtoon and I LOVE, LOVE, LOVE Yoon Kye-sang.

I meant the new episode of the webtoon. It made me dislike the choices in the drama even more.

Perhaps I’m better off than the rest of you ‘cause I have never watched the webtoon.

Yep. I wouldn't have a problem with the show if I didn't know the webtoon. I feel annoyed only because I love the original vibe of the story. The drama is totally different.

It is always the case, any adaptation means gaining a few fans by default and losing a few.

You’ve become an Ultimate Bean: the one who can endure every Kdrama.

And I sincerely wish he has a better role in this than in the Webtoon. (I like him too)

I really hope it's better than the trailer. This cast deserves to shine! Let it be good, even if I have to hate Kim Jisuk - again *eyeroll*
( Pleading to the fairies that worked on Business Proposal)

Oh wait, Disney. But I'll still keep my fingers crossed that'll blow everyone else away. Lol

If this show can dim KJS’s light, I think it is a class of its own and that’s not in a good way.

I love the cast (as actors). I’m a bit sad to see KJS in a SML role, but oh well let’s see what he’ll bring to the table.

*sigh*
I just read the webtoon and... I'm done with Jerk Bosses who Are Hiding their Crush on the Female Lead...
Skipping this one.