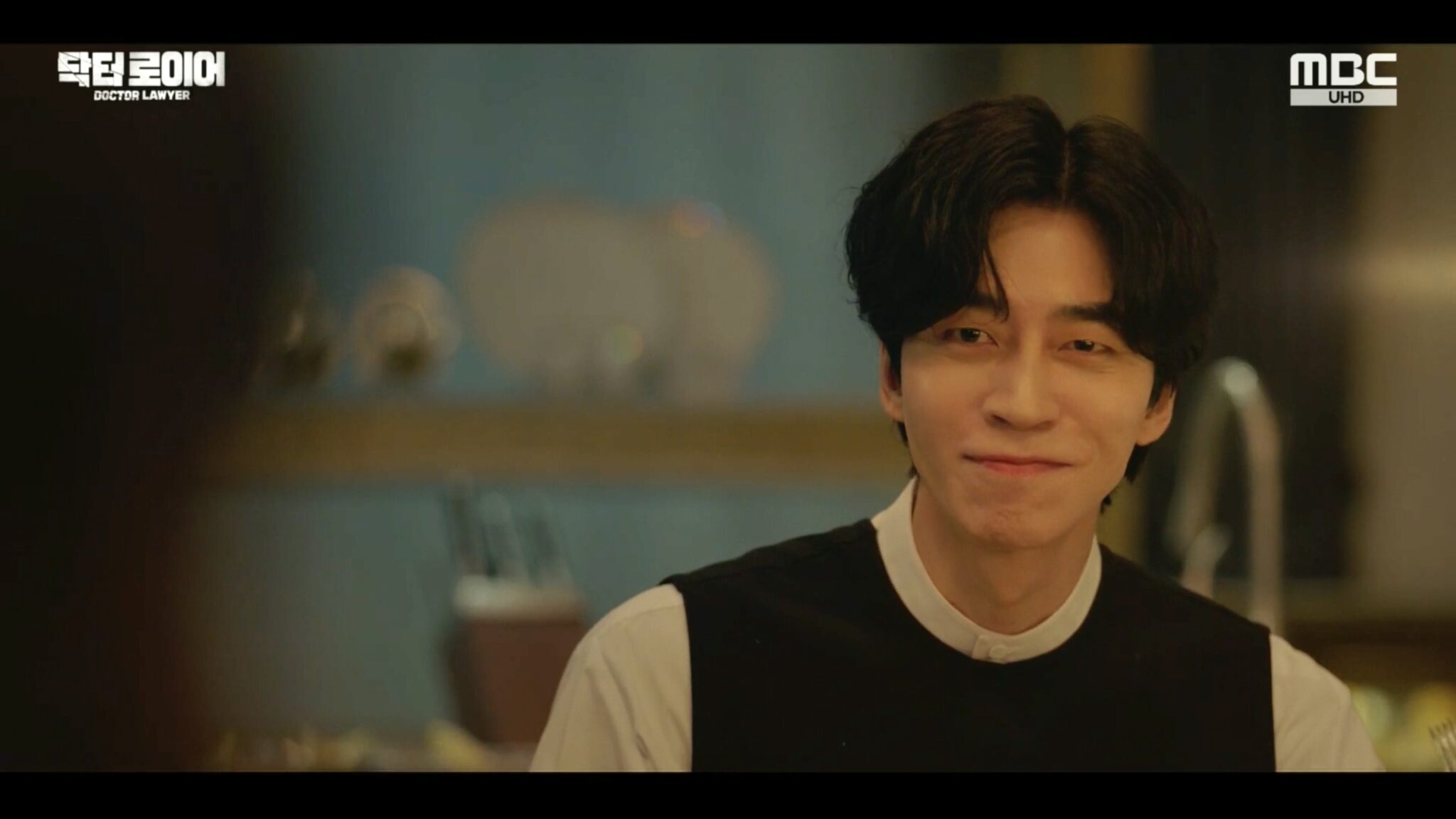 A captivatingly unpredictable businessman arrives to shake things up, while our eponymous hero continues digging deeper into the Banseok conspiracy. Some nuggets of information may not come as a surprise, but others may lead him on the path to striking gold. 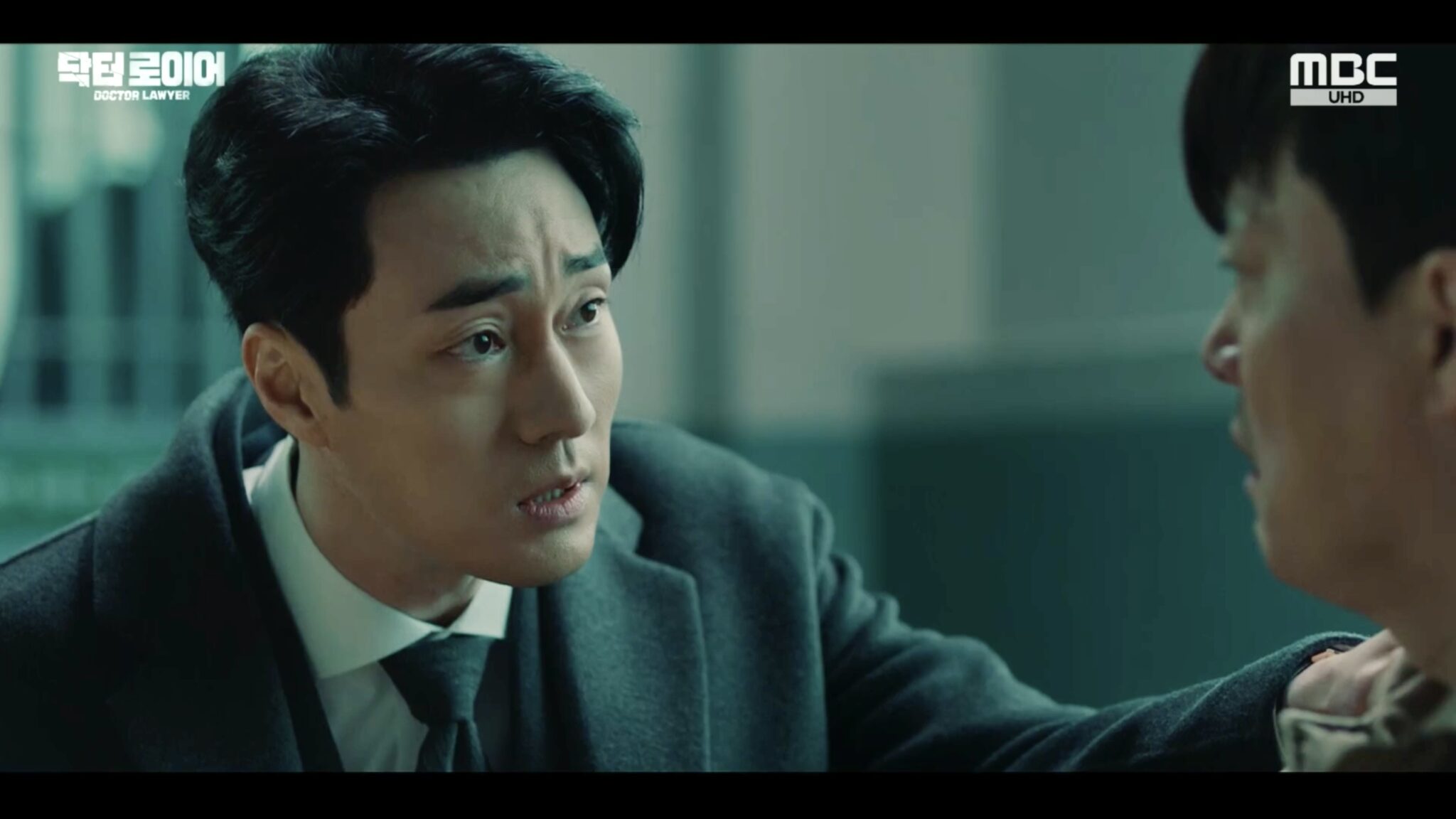 We rewind prior to Yi-han’s dramatic reappearance at court. Yi-han pays Ki-tae a visit at the detention center, introducing himself as a medical malpractice lawyer. Wracked with guilt over the perjury he committed at Yi-han’s trial, Ki-tae grovels and apologizes profusely, but Yi-han isn’t moved.

He knows selfish opportunist Ki-tae is merely putting on an act, so he cuts to the chase — if Ki-tae admits to his perjury and Chairman Gu’s bribery, Yi-han will prove his innocence.

And so, Ki-tae obtains amoxicillin from the prison doctor to treat an (intentional) injury, in order to induce the anaphylactic shock we saw in last week’s opening scene. 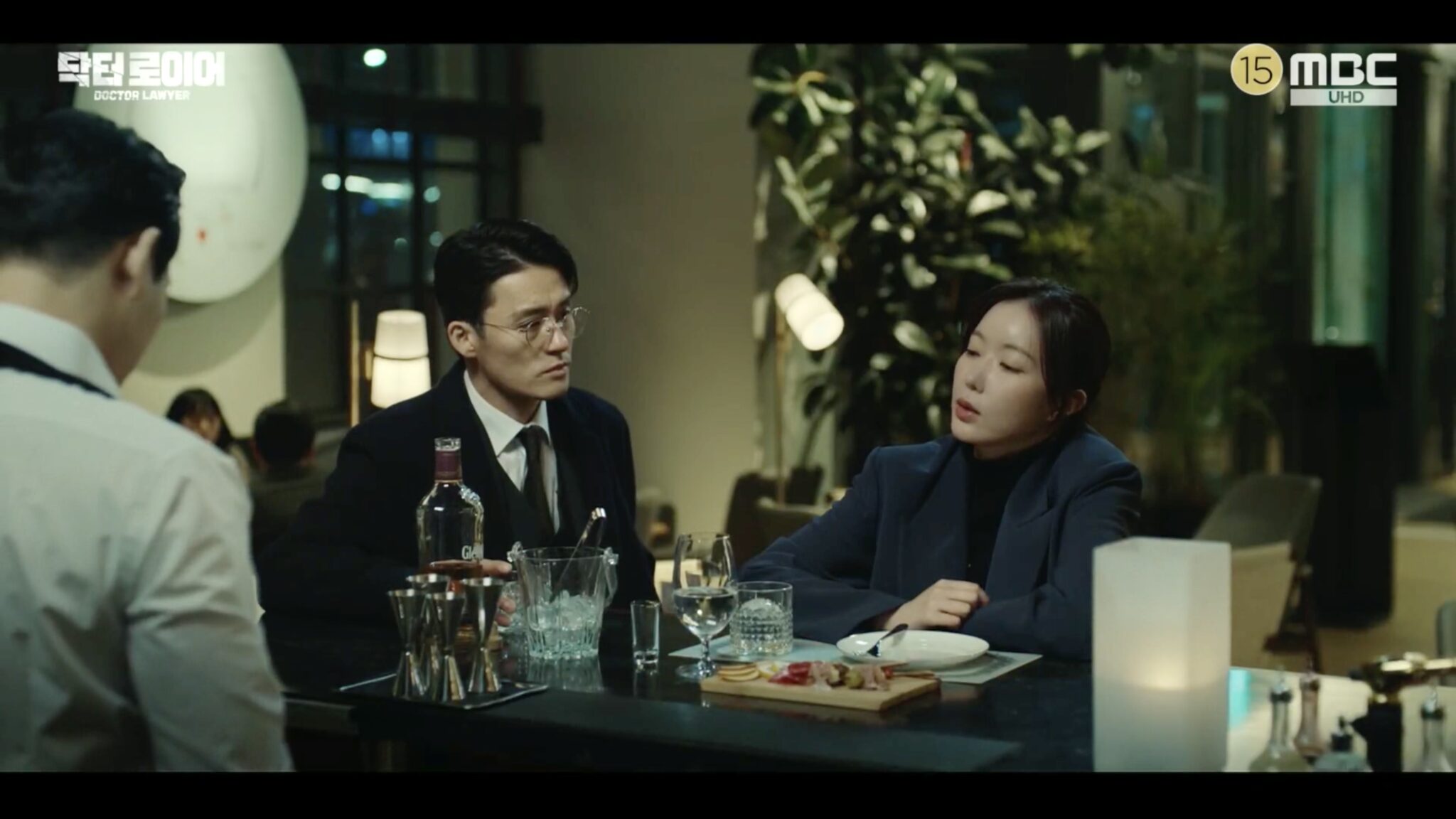 Working his medical magic, Yi-han pulls Ki-tae out of the life-threatening crisis and sends him off in an ambulance. The interruption gives Yi-han the chance to request for another trial, since he claims that he has an additional witness to present.

Seok-young’s incensed that Yi-han could defend a doctor from Banseok, and his cold rebuke to keep things professional has her drinking herself into a stupor post-trial. Fellow prosecutor BAEK KANG-HO (Choi Jae-woong) joins her at the bar for emotional support, and she vents that Yi-han doesn’t seem to feel any remorse for the malpractice that killed her brother. 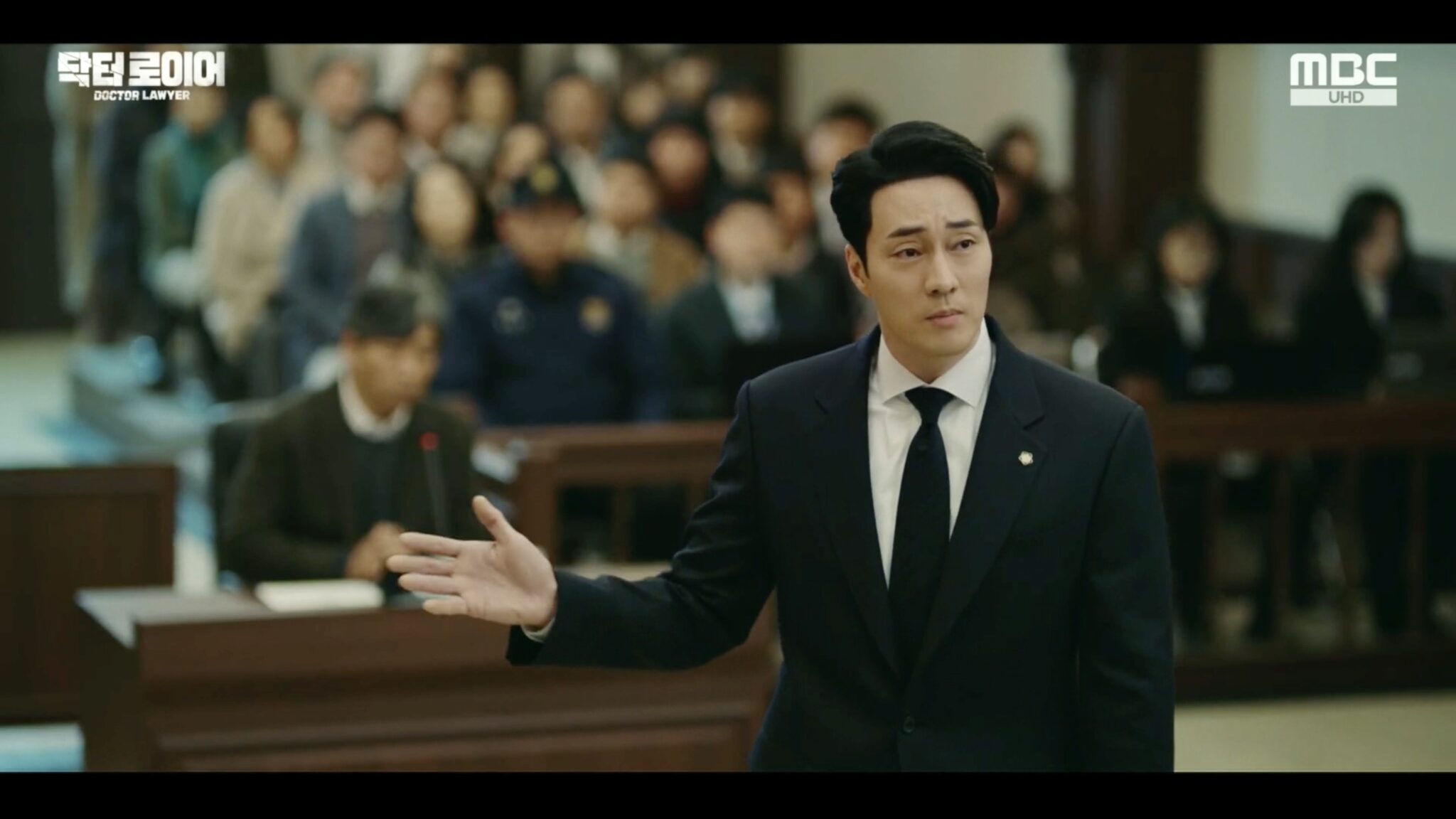 At Ki-tae’s next trial, Yi-han calls the victim’s father, LEE KI-YOON (Seo Jin-won), to the witness stand. Ki-yoon claims that Ki-tae caused his son’s death by providing insufficient treatment, but Yi-han reveals that the origin of the victim’s ailment lies in Ki-yoon’s physical abuse of his son.

Of course, Yi-han’s presence at the trial doesn’t go unnoticed by Chairman Gu and Hyun-sung. Predictably, Ki-tae ends up dead that very night, leaving Yi-han shaken but determined to continue his crusade against Chairman Gu.

Seok-young asks Yi-han for a private conversation, where she thanks him for revealing the truth at the trial, and asks him his reasons behind becoming a lawyer. Yi-han gives a blasé response about the good pay, and then redirects Seok-young’s attention to Ki-tae’s case — the inmate that murdered him is the ex-husband of the nurse that assisted in Seok-joo’s surgery. 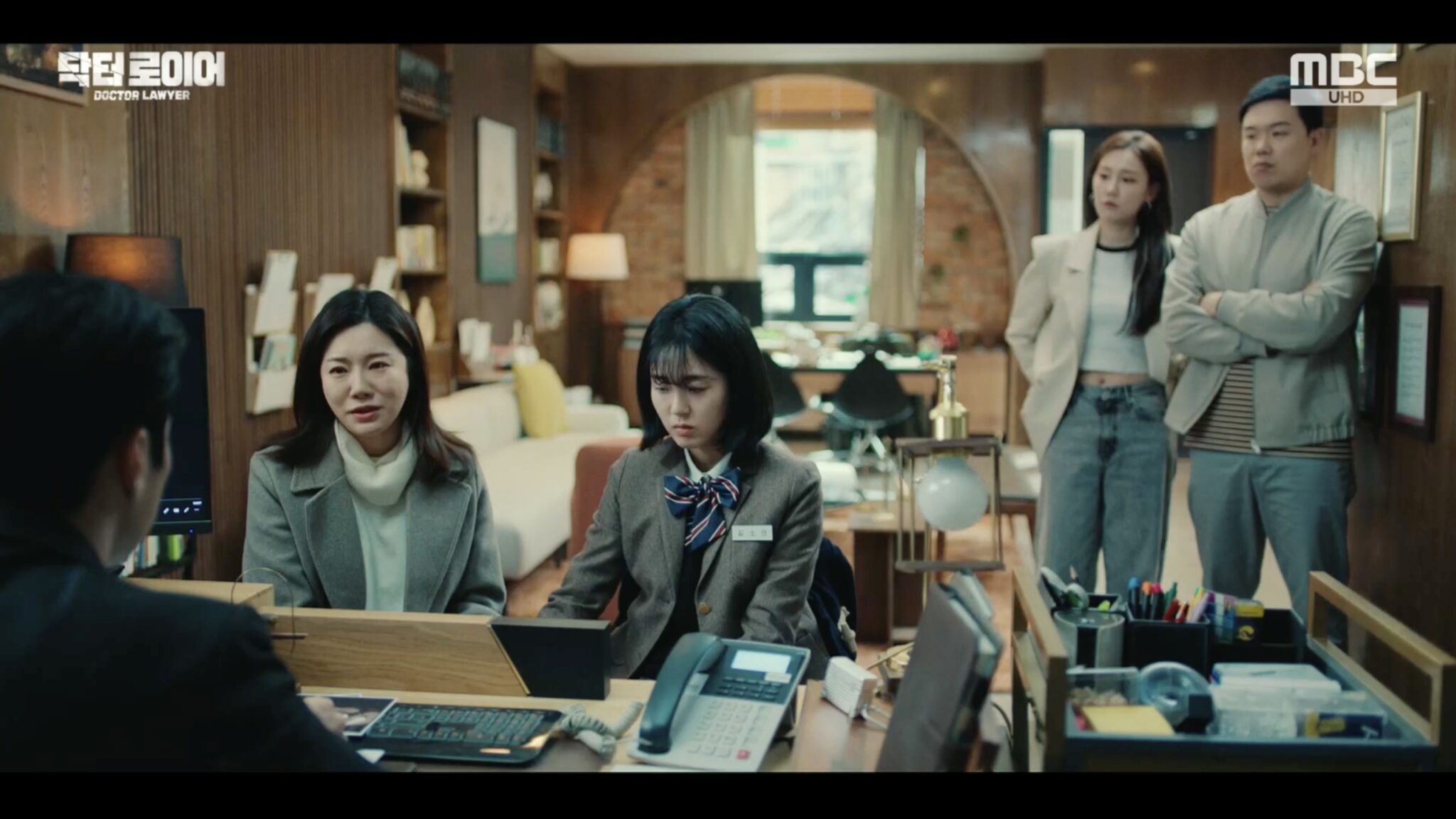 That’s clearly foul play on Banseok’s part, and Yi-han announces that he’ll represent malpractice victims of Banseok pro bono. It’s an effort to put pressure on Banseok, and amongst the flood of trivial complaints lies a serious case.

High school student and aspiring singer GIL SO-YEON (Jang Seo-yeon) has partially lost her voice ever since a complicated heart surgery, and she asserts that the anesthesia had worn off mid-surgery, leaving her traumatized. The surgery was helmed by Hyun-sung, which means it’s a perfect opening to knock Banseok down a peg. 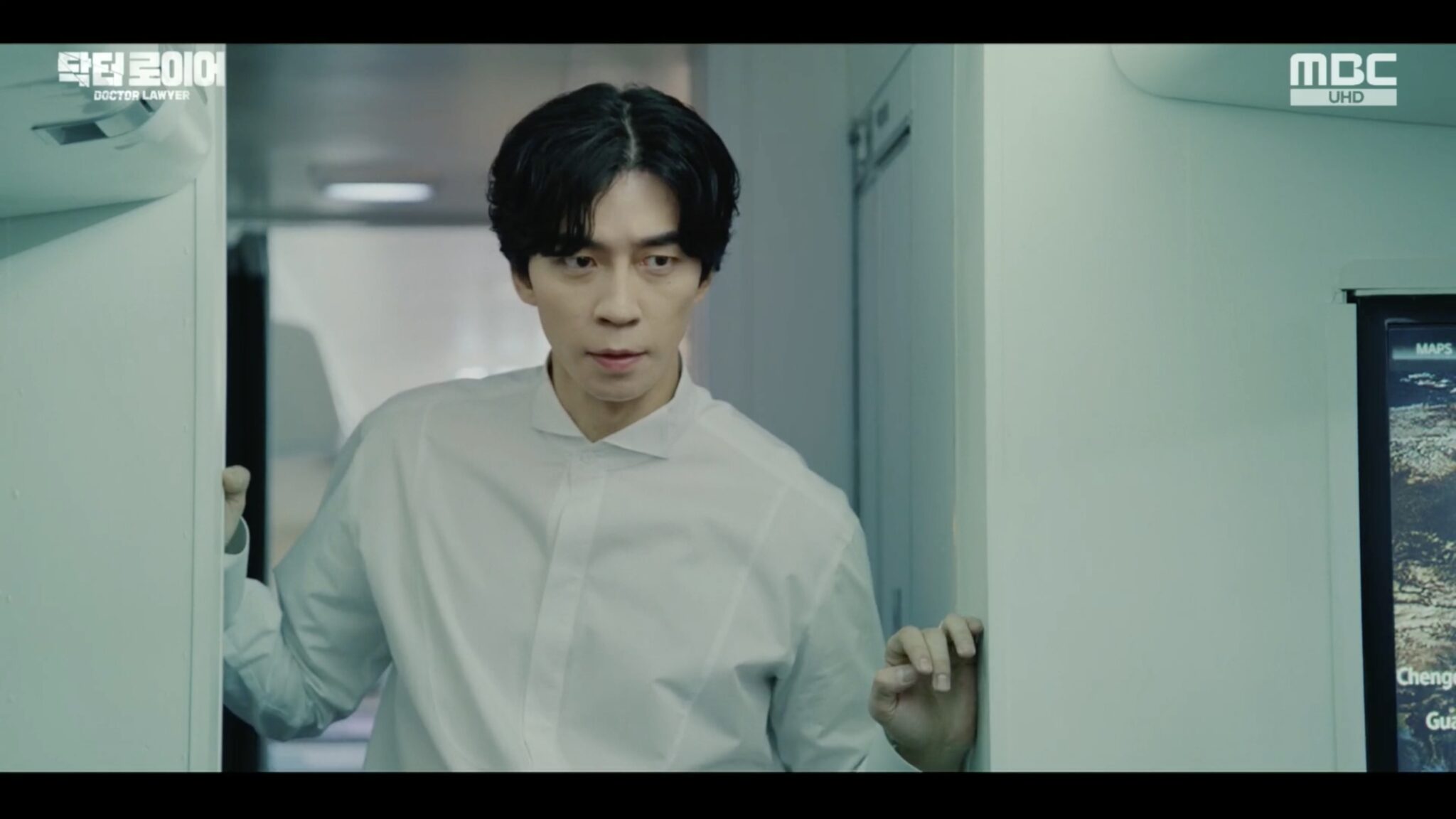 We’re (finally!) introduced to JAYDEN LEE (Shin Sung-rok), who saves a cardiac arrest patient onboard his flight by snatching a passenger’s headphones and using its magnet to reactivate the patient’s pacemaker. An impressed flight attendant asks him which hospital he works at, but Jayden nonchalantly replies in English, “I’m not a doctor; just a businessman.”

At a prestigious medical forum, a surgery is being broadcast live to demonstrate the newly-invented V-Rock machine, which allows for minimally-invasive heart surgeries. As usual, Hyun-sung makes a mistake, but he recovers quickly with the help of the machine. 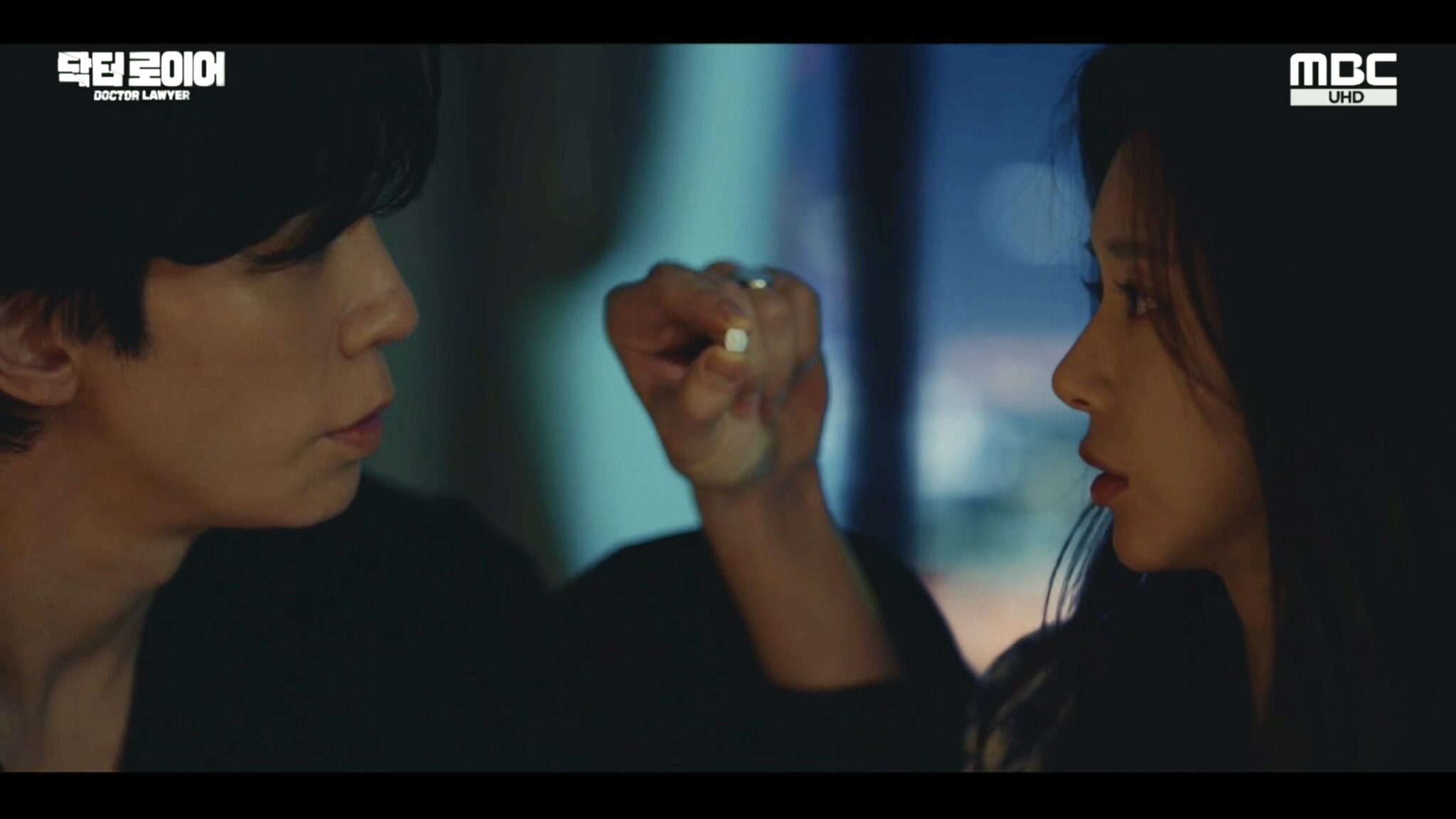 Jayden shows up at the forum too, as one of the investors in the up-and-coming technology. There’s a charged moment between him and IM YOO-NA (Lee Joo-bin), Hyun-sung’s matchmade sweetheart — ooh, I’m enjoying this tension. Her interest has been piqued by Jayden’s confidence and lack of subservience to the power-hungry elders, much to the chagrin of Hyun-sung.

Hyun-sung’s fears aren’t unfounded, though; before long, Jayden and Yoo-na are swept up in a secret tryst, and he offers her an unknown pill that he claims will give her freedom. She takes it, sick of playing the picture-perfect politician’s daughter. 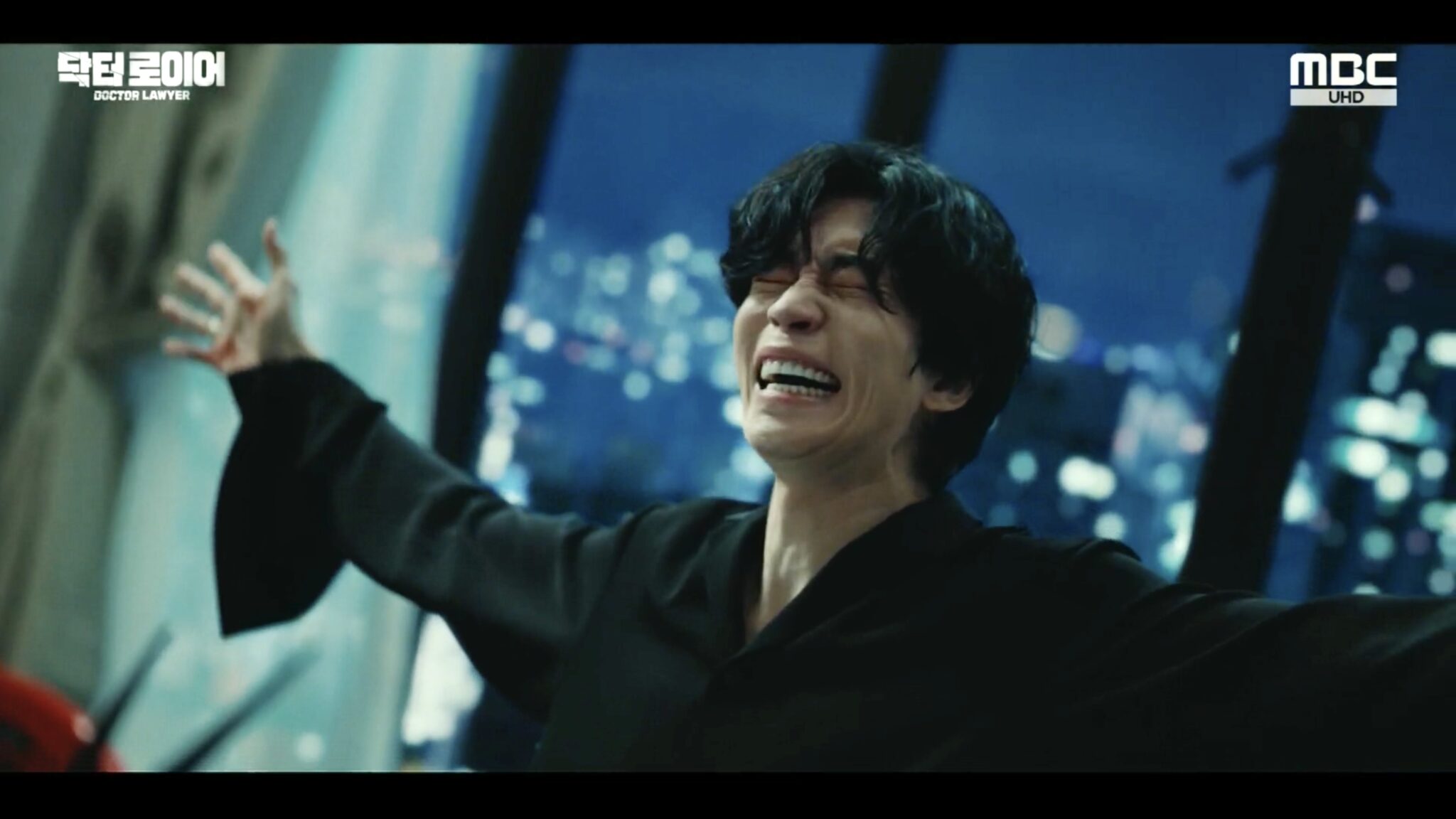 That night, Yi-han gets a call from Jayden’s aide, requesting a meeting. (Jayden had taken note of Yi-han due to Ki-tae’s trial, as well as a coincidental run-in at Banseok Hospital.) Yi-han shows up, intrigued, only to find Yoo-na bleeding from a head wound and seemingly drug-addled.

An off-kilter Jayden stands over her, delightedly welcoming Yi-han with a crazed grin. He grabs Yi-han’s shoulders with bloodied hands, and Yi-han realizes that what Jayden needs isn’t a lawyer, but a doctor — one that will never speak of this incident to anyone.

For all that this show is predictable, it’s great at leaving me wanting to tune in again. You can’t give me just two minutes of absolutely electric tension between Shin Sung-rok and So Ji-sub, and not expect me to demand more! 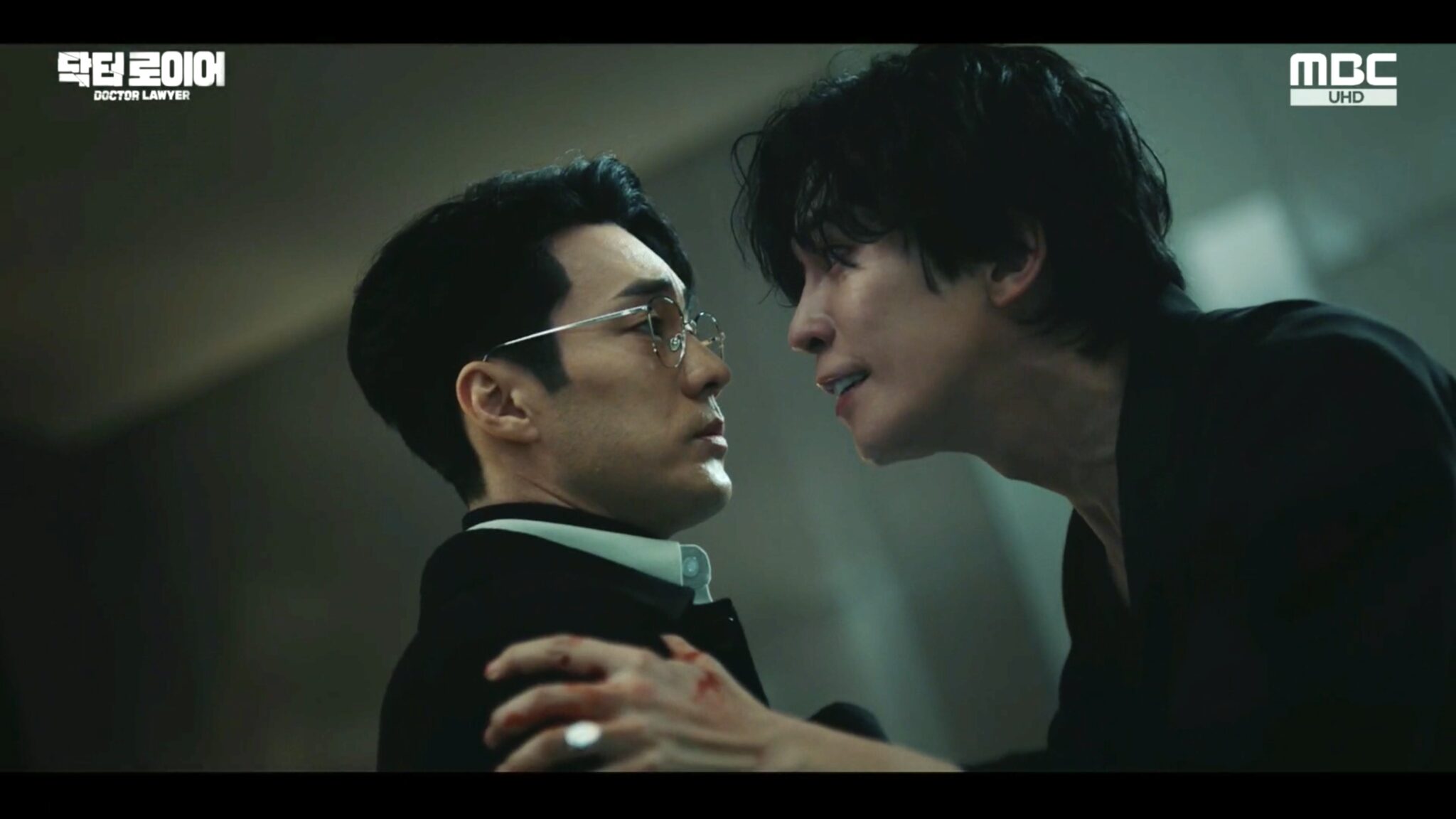 I have a feeling Jayden and Yi-han’s partnership may well extend beyond just this cover-up, especially since the beginnings of a conflict between Jayden and Chairman Gu are starting to stir. With Chairman Gu trying to weasel his way out of fulfilling his end of their investment contract, Jayden seems like he’s planning to make Banseok’s stock prices plummet to reap the maximum reward.

And what better way to do that than to team up with Yi-han, the one person who has both the means and the motivation to take Banseok down? The dynamic of a stoic doctor-lawyer and a cunning businessman is definitely going to be fun to watch. 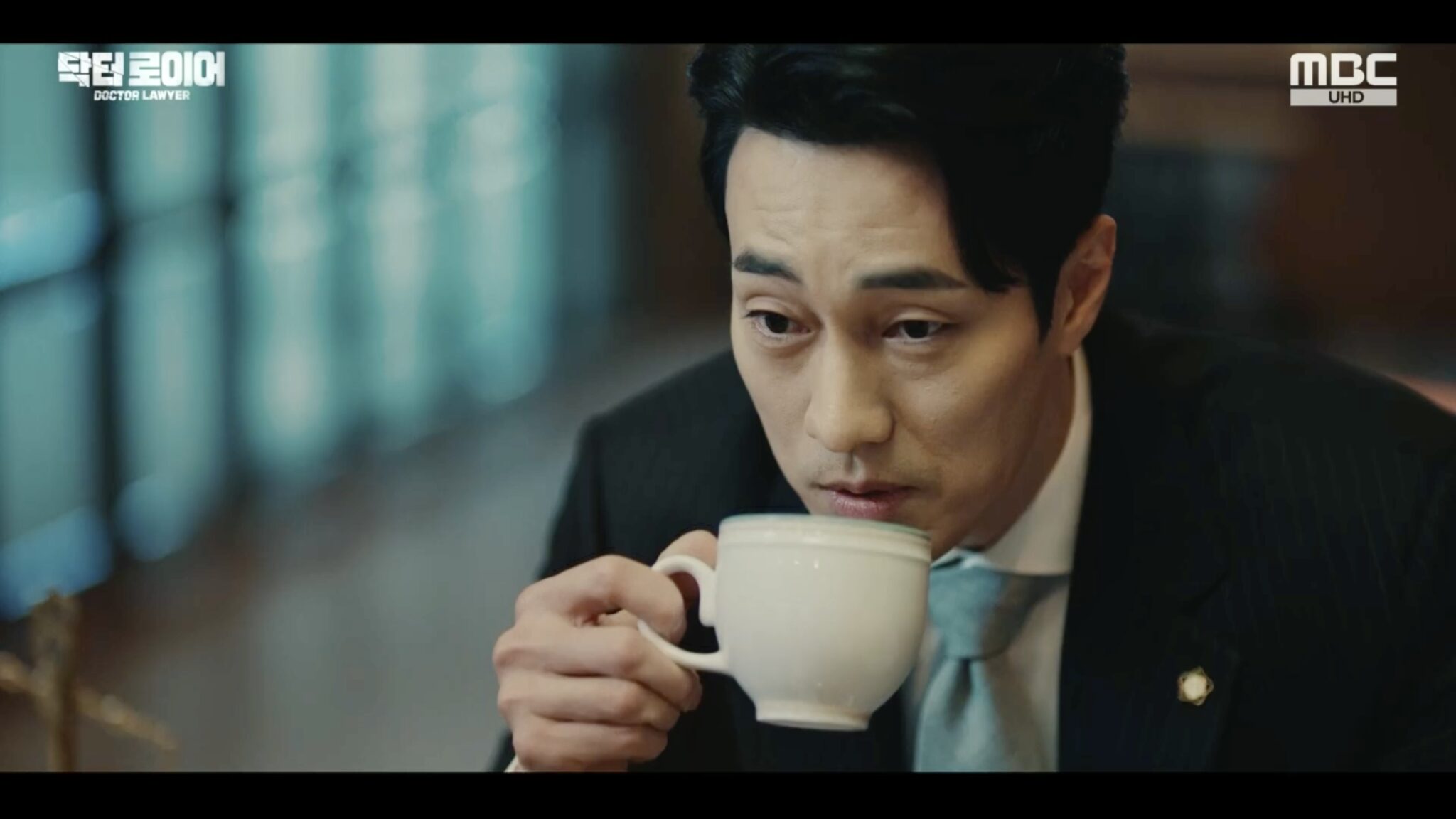 Predictabily Jayden will be Rachmanioff ! Who else but Shin Sungreok can fill in the role for Villain aka VIP ! Writernim is too predictable

I am interested in jayden backstory, what was he before he became a businessman, i mean only people maybe doctor or engineer knows how to use a magnet to reactivate pacemaker. It will be really predictable if he is the ramanioff guy, if he is, he is now trying to take down chairman gu, cos he is sly businessman, humm. Interesting drama, waiting for ep 5 n 6 to reveal more. Whether they will team up or fight each other, be so fun to watch.

Hellllllooooooo Jayden Lee😏😏😏. He is the most interesting character in the show. His utter lack of respect for Hyun Sung is consistently hilarious to me.

I would like to note though, that weed stinks to high heaven especially if you are smoking it, so the smell would have been all over that back terrace. Also no one throws away an unfinished blunt. As for her reaction to the molly, it could happen. Jayden high as a kite, also possible. However someone who uses it casually like that would probably have a calmer reaction. The most accurate thing about this is that Lobbyist in the states do a lot of drugs, so cheers. lol

The most interesting scene across the two episodes was when Jayden met Yi-han. I'd buy a slow-burn romance between these two faster than anything else that's happening in the show. I can feel my eyelids drooping anytime Im Soo-hyang is on screen.

Yay shin sung rok appeared and he made it onto the recap main picture!! I'm no longer crying in a corner 😂

I want to know what happened in the Penthouse. Bring on more eps! 🤓