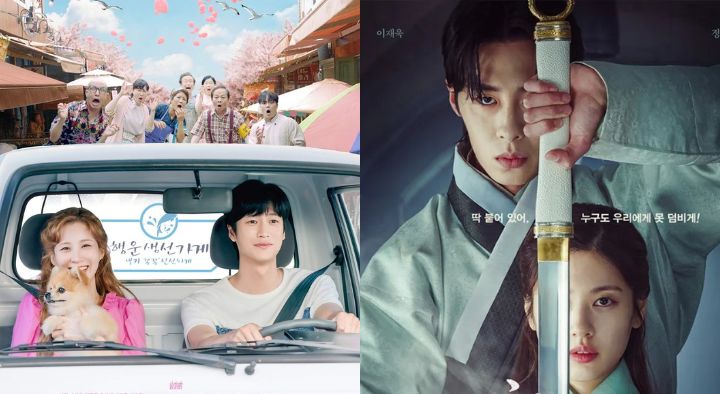 June just keeps delivering more and more premieres, and it’s not over yet! This week we have two shows on the lighter side of things, with a fantasy rom-com about a woman who changes fates, and another fantasy rom-com (maybe?) about trapped souls and magic. Both likely served with the requisite hijinks. 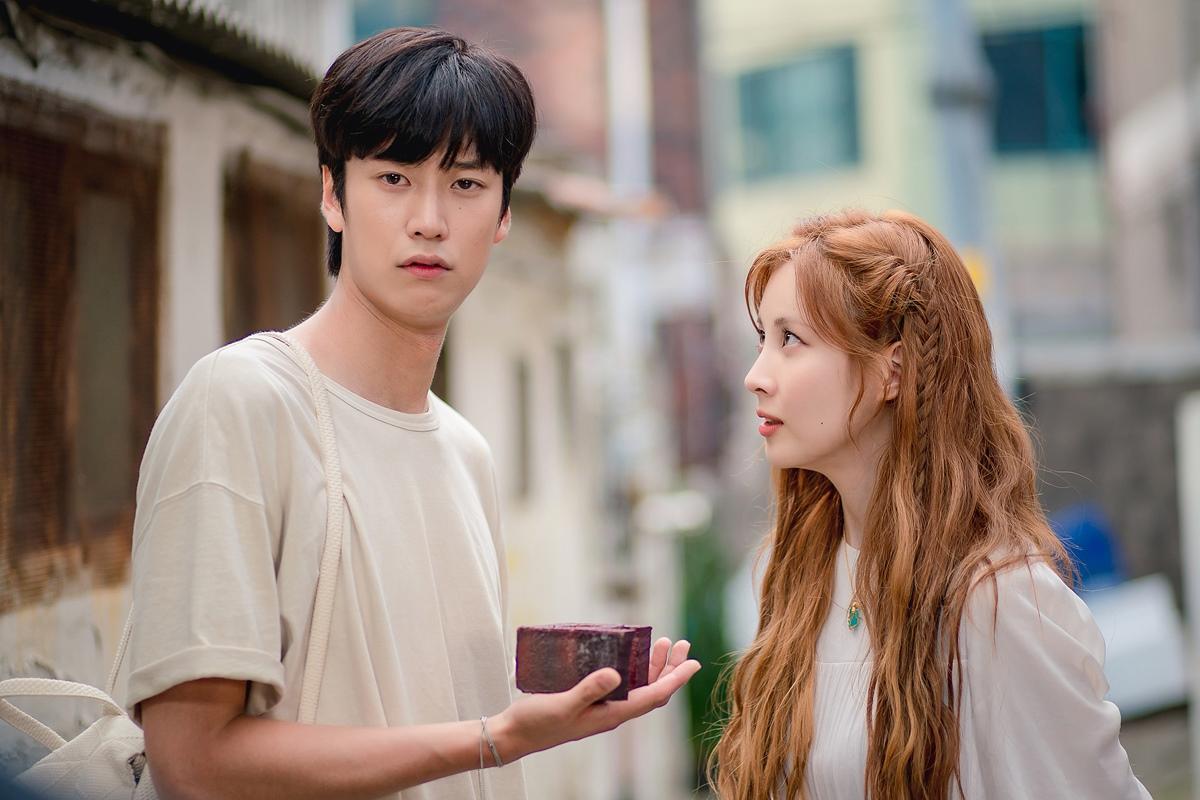 Reasons to watch: Having been in dramaland for a while, it’s become a trick of the trade to always keep an eye on rom-coms that are flying under the radar. Or that seem as if their premises have the potential to be a disaster. Sometimes it pays off, because dramaland inverts our expectations, and we get a super fun gem that pulls off its weird concept without a second thought. And that’s where I currently am with Jinxed at First — not terribly pulled in, but also on high alert for a show that could be a lot better than it sounds (especially with the PD calling it a “happy virus” drama). With rising star Na In-woo as our jinxed hero, and Seohyun as the woman with the power to change fortunes, this just might be crazy enough to work. 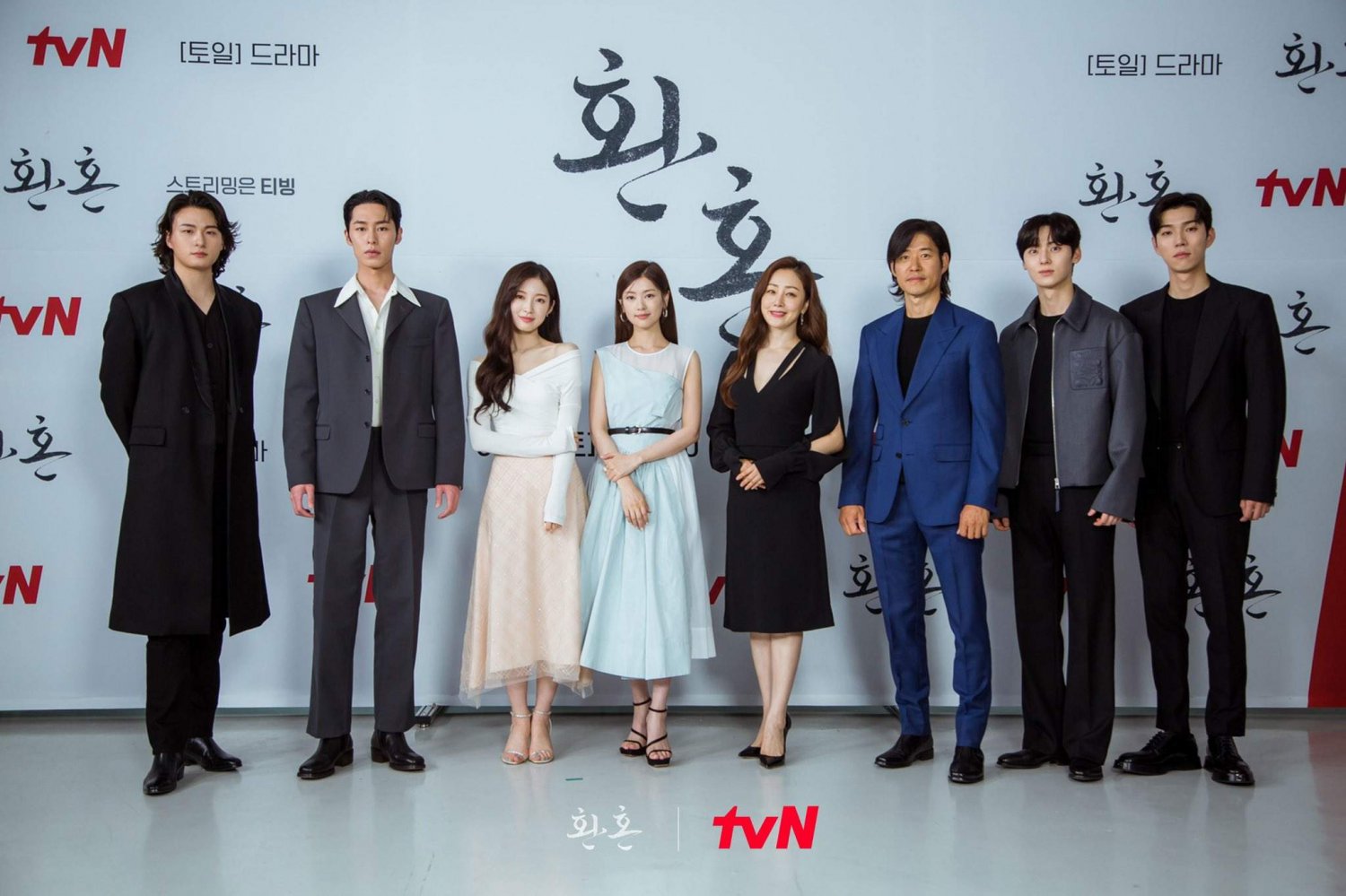 Reasons to watch: Speaking of crazy enough to work, that’s the same mindset I’m bringing to the Hong sisters’ latest offering. The early trouble behind the scenes might have worked in our favor, because if nothing else, Jung So-min and Lee Jae-wook look like a lot of fun together in the promo materials. But more than the cast, we also have to consider the setup — right now a confusing mythological and pseudo-historical setting rife with magic, swordplay, and soul-swapping. I don’t want to say outright that it will take a lot for this drama to work, but it will take a lot for this drama to work. Either way, it’s pulling in a lot of buzz, and will likely do the same with eyeballs when it premieres.

I'm watching Alchemy of Souls, which could go either way.

I'll be trying out both with Alchemy of Souls getting more leeway due to its cast. Watching Jinxed at First purely to fill the space left by Love All Play.

I will likely try both of these out, assuming they are available somewhere easy for me to watch.

Alchemy will be on Netflix and Jinxed on Viki, at least in the US.

I'm going to try Alchemy just for Lee Jae-wook and Jung So-min, but I'm prepared to drop the minute it gets too Hong-ish.

I’m in New Zealand but there’s a good chance it will be the same (perhaps not as quickly).

I generally like Hong Sisters stuff (with notable exception of Warm and Cozy, which I feel like I’m criticising all the time at the moment 😂) so I’m crossing my fingers for something good.

Jinxed on viki in the UK as well

Hey
Are you part of the UK crew too?

The entertainment biz bias for tall men and petite women is really on display in that Alchemy promo pic - all three women are wearing high heels, and yet even the shortest of the men is a head taller. If LJW has a kiss scene with any of them I expect he'll have to fold himself in thirds.

That’s exactly what I thought when I saw the pictures. Are the men really tall or are the women just short to make them look taller?

A little bit of it is an artifact of the photo set-up: they're standing in a shallow arc and it's a wide-angle shot, which exaggerates the height of the people toward the sides. But only a little. LJW is listed as 6'1"/187 cm, for reference. The height difference is real - subtracting her heels, he's probably 10-12"/25-30 cm taller than Go Yoon-jung, to his right.

I agree with the framing they could have adjusted a couple of the male actors and the difference would have been less noticeable. I don’t think it’s a good shot no one looks comfortable or happy. They already look done with the whole promotion element and it’s not even started yet!

I remember having a conversation under a Rowoon casting news thread about who wouldn't look tiny next to him specifically, and then trying to collate a list of various tall actors and actresses lol.

Rowoon is just a member of a different, taller species! 😆 Some of the BTS clips from Extraordinary You showing the contortions he had to do to hug or kiss Kim Hye-yoon were just hilarious.

Rowoon didn't tower over LJS in that show, so LJS is legit tall.

He's one of the tallest k-actors yes I know! hahaha and ofc HY is just tiny herself lel
Lee Jae Wook (I think you mean?) is also just legit tall yes haha. (He is on said list pfft)

LJW, yes @sicarius. Hand/brain disconnect in the presence of so much pretty. 😂

But the BTS were super funny! Like Rowoon and Lee Jae-Suk were talking and ignoring Kim Hye-Yoon who was between them. Or they made a scene bending down to her height because she didn't hear them well.

@kurama thanks for sharing the BTS that was funny she is particularly small but they definitely emphasised the height difference.

Both Jo Jung Suk and Gong Hyo Jin are fantastic actors, but their similar height was very effective in showing their power balance in Jealousy Incarnate.

To each their own I guess. I think they looked perfect together.

I was thinking the same in Shooting Stars 16, it’s nice to see a tall girl wearing stylish flats instead of girls who look like the MLs could hold them in their palms.
*that’s my Height Cell talking

I am looking forward to Jinxed at first but hoping it doesn’t go down the gross and over the top physical humour route to try to get cheap laughs, yes I am looking at you Welcome to Waikiki.

I need some mid week shows as everything I am watching is at the weekend now.

Alchemy of Souls will likely end up becoming a car crash by the middle point (because its the Hong sisters), i like cast enough to give it a chance.

Hoping Jinxed will fill the hole left by Shooting Stars.

Perversely, I think we can have fun even if it does become a car crash 🤭

I've been hyped for Alchemy of Souls ever since I heard LJW was in it and lowkey wasn't aware of Jinxed at First Sight till like the other day - so as it usually goes for me, I'm now fully expecting the long-awaited show to not quite measure up to my hype and the question mark "unknown" show to instead steal my heart (the way Showtime did).

Either way, I'm glad I'm free of Uni exams in time for these two in particular - I was mourning the fact that exams got in the way of the finales and premieres that just passed, but I guess the forced break and rushed catch up now means less time for a big Love All Play shaped void to grow and I can fill my plate up again with the new on air shows.

*Jinxed at First, idk where the 'Sight' came from

Predictive text the bane of our lives😳

I hope that Alchemy of Souls will be good but the trailer was very convincing. There is a weird modern vibe.

From the promos, I'm more likely to watch Alchemy of souls than Jinxed at first but let's see what goes

I’ll definitely be checking out both of these. I like the leads of both, but Alchemy of Souls seems like it has a stronger overall cast. Having read just the basic synopsis of Jinxed at First I’m a little dubious it’ll have the legs to go for 16 episodes, but we’ll see. I’m definitely in the mood for some rom com goodness so *fingers crossed*

I'm not expecting much from Jinxed at First, but I like Na In Woo and will give it a shot. Just give me something cute, and I'm in.

Honestly, Alchemy of Souls looks like a hot mess from the promos and the cast does nothing for me. I'll try it but there's probably no way I can last 20 episodes. Who thought it was a good idea to give the Hong Sisters 20 episodes to fill anyway??

My hiatus is over and I am so glad there is no availability angst.
Maybe ‘hope springs eternal’ so I think both JINXED (Viki US) and ALCHEMY (Netflix) will be great.
Before the end of the month I should have two other upcoming dramas on my viewing card: SIG’s CAFE MINAMDANG (Netflix) and
back from the dead: KBS’s DEAR M (Viki US).

Thanks for adding the streaming networks for the US!

Sure.
O/T. We really don’t have that many legal options in the US so when one (Kocowa) starts to divert its dramas to Disney plus which does not stream those dramas in the US it annoys me to no end.

With you all the way on that! Great to hear that these four will be see-able!

I’m skeptical about whether Jinxed at First has the legs for a 16 episode run, but I’m still looking forward to it. This is definitely a case of me falling for the promos because the what we got was just so freaking cute lol.

And speaking of skepticism. Ooh boy, Alchemy of Souls. Honestly a better way to put it is, what part of this am I not skeptical of? Dramaland has never really pulled off the sort of original world-building, high-fantasy setting that the Hong sisters are going for here. Not the mention the weird pseudo-3 Kingdoms, xianxia thing they’re going for here. Maybe I’m being anxious for no reason and the Hong sisters will deliver - unlike how they half-assed all their previous works. Whatever, I’m not saving my breath - I gave up on the fantasy of decent fantasy kdramas a long time ago. I’m mostly here for Lee Jae-wook.

Can I ask why is King of pigs on the list of airing dramas as if it is also premiering this week? I think it already aired and finished this spring on TV ING?

It's getting a rerun on OCN starting June 19th.

Watching Alchemy of Souls with trepidation. Finished all of the hong sisters dramas (except warm and cozy). I do like them but for the past decade, it's been up and down with them. Loved hotel del Luna so suspect this may be time for one that I don't like as much.

I like the premiere episodes of Jinx. NIW is adorable as ever 😍
Dropping Woori and will watch Jinx instead. Can't wait for next week's episodes!