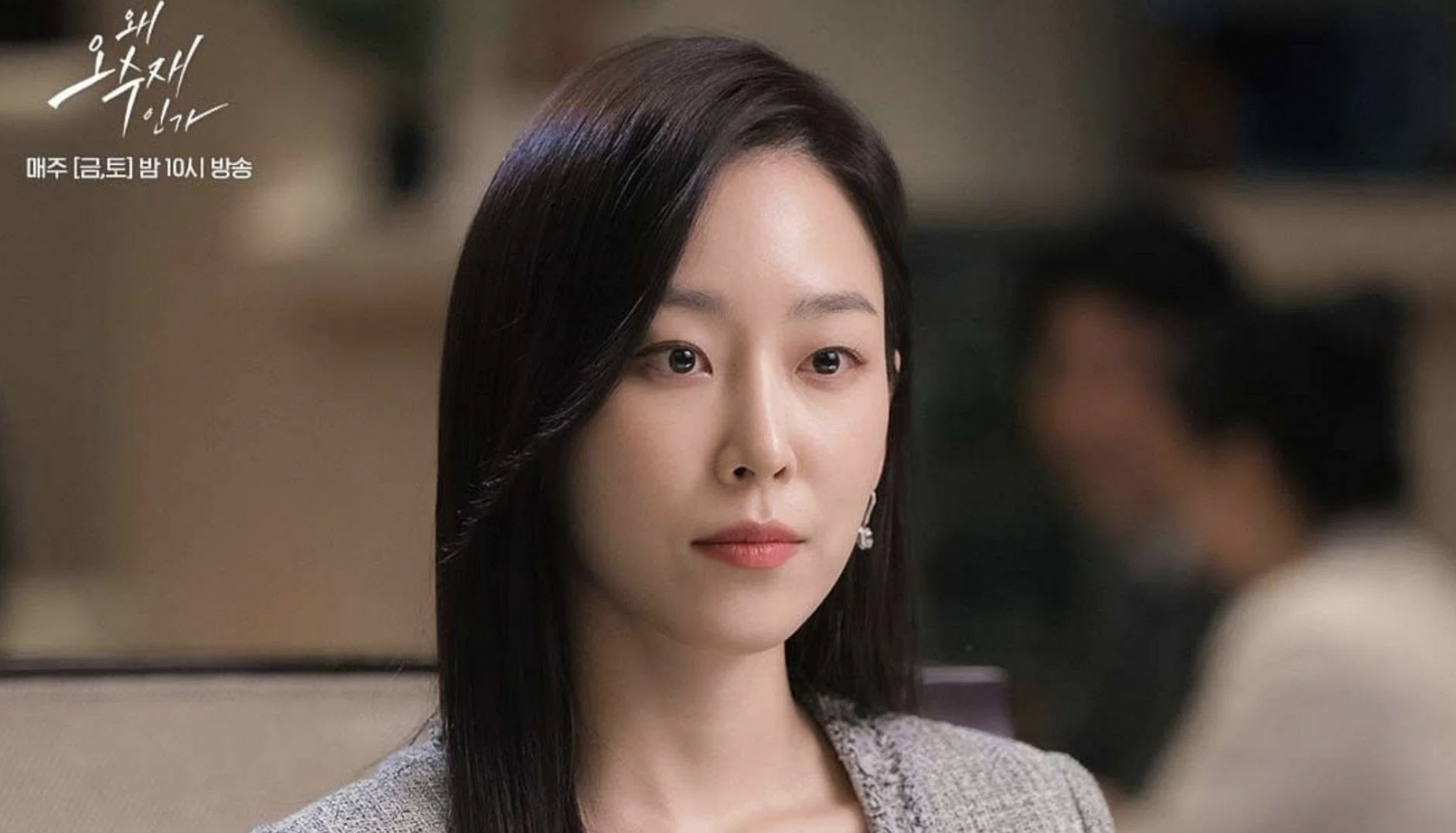 As Shark Week wraps up on the Discovery Channel, it’s got me thinking about metaphorical sharks. You know, people who are aggressive, ruthless, and often conniving. It’s a descriptor that’s often used when referring to lawyers, given their professional proclivities, and I can certainly think of a few legal aces featured in the recently completed Why Her? that fit the bill.

K-dramas are full of characters — not just lawyers and prosecutors — who attack at the first sign of blood in the water. But depending on how you view the term, shark can also be a positive compliment for someone who’s driven and adept. Good or bad — there are a lot of sharks in dramaland.

So, who are the biggest, baddest sharks of dramaland that leave their opponents thinking they’re going to need “a bigger boat” to go up against them?

I am just watching scent of a woman and the second female lead Im Sekyung she tries so many different ways to get rid of the female lead and just when you think she has accepted defeat she comes back for the next round. She is vindictive in her actions.

The one I'll categorically call need bigger boats to one-up each other is Monster(2016). I can't count how many time both the protagonists and antagonists rise, and fell. It was almost to no end. They needed the bigger boats the most.

Another is a C-drama, The War Princess Li Wei Young. These one had her opponents needing bigger boats. And even when they clipped her wings, their insecurities made them(the opponents) look for boats, again. In a position of grass and despair, or that of grace, Weiyoung had her opponents and those who mad her an opponent on thier toes.

Oh Yoon Hee in Penthouse is another gem - The one person who can legit make Joo Dante and Cheon Seo-jin worry about thier necks.
If I sat through season 2& 8 episodes of 3, it was because of Oh Yoon Hee.

I think only Cheon Seo Jin is actually scared of OYH - my lingering memories of Penthouse is that JDT was this unstoppable evil overlord type of character up till end of Season 2, then somewhere in Season 3 where he degenerated and become ... kind of dull. Dunno probably because of everything went downhill after Season 2, or i'm get tired of the series already at that point.
He has great death scene though, fit in nicely with the whole Penthouse theme and SSR's journey.

In terms of badassery I do think SSR is way much more prominent than OYH, and her character journey is remarkable. OYH ... the writer seems undecided on making her a villain or protagonist, its true that she killed MSA but her redemption journey feels contrived to me. A killing is still a killing no matter how I see it ...

Definitely Vincenzo. That scene where he has his first confrontation with the thugs hired to harass the people in the building and he ends up dangling their leader from a balcony? Yeah I'm pretty sure they needed a bigger boat.

I also think Man-wol from Hotel Del Luna was a bit like this. She was incredibly powerful, so when she pulled out all the stops, ghosts and humans often realized pretty quickly that they were out of their depth. And she looked completely fabulous while doing it.

Another would be the three female leads from Search WWW. None of them are lawyers, but they are all confident women in strong careers who make formidable opponents for each other and others around them. I think Se-ri from Crash Landing on you also falls nicely into this category.

There are plenty of others who are lawyers and agents and things, but these a few that I thought of. (Well, I guess Vincenzo is a lawyer, but not in Korea, so I'm not counting it haha!)

Scarlett also literally drew blood from the pervert she had beat up in the elevator!

Watching Money Flower is like swimming in shark-infested waters.

Lee Sang-yeob from While You Were Sleeping.

Definitely the lawyers from Vincenzo

The Prosecutor from the show Sketch

The Father & Big brother from Untouchable

I just recently finished watching Voice on netflix so let me add the villain from there. That dude is nuts 🤯

Lead pair of Hyena. They both typically went after each other so blood bath was often contained but if they worked together they could even take down the whale.

*ahem* in the Spirit of Cham Cham Cham, I object to this animalistic metaphor; sharks are gravely misunderstood and demonised creatures (thank you, Jaws, not) and I feel obligated to defend them against their reputation.
They're quite cool, funky guys if you just get to know them! Promise.

This is a genius call, can’t believe I missed it and definitely in the using powers for good camp. When we don’t know him he appears ruthless, disloyal and self centred by the end we know he did everything for the good of the team. He had even gained the grudging respect of his rival team manager.

I loved him from minute one. I never found him self centered or disloyal- just wickedly good at his job and too good separating personal feelings from the professional practicalities. (And then ofc you learn later that this is on purpose and that whilst it is clinically effective for his job, it also has a negative side which is explored, and then gently developed. Mwah. But you also have this balanced against his excellent skill at managing *people* and earning their respect, whilst doing his job annoyingly well, much to the chargrin of his opponents, who do not understand him at all, and frequently underestimate him, all the while, maintaining his integrity at the same time. Ugh, what class. It's been a week since I finished and quite frankly the airing dramas I'm watching are going to have a lot of work to do to live up to the writing of it. The balance of a smart competent protagonists who still has things to learn, and still has to make sacrifices to win? I do not get that enough!
... Lol this turned into a mini HSL gush pfft.)

It’s good when we have thorough analysis of the good dramas with well written characters and storylines outside of how gorgeous Oppa or Unni were in it, as this balances out the detailed I hated this drama for all these reasons…posts. It also helps to give perspective on the low rankings given by others to the dramas that we like.

Also gives well articulated words to my jumbled thoughts. I can say ‘yeah like she said…’ and try to look smart by association☺️

The irony of saying this to me of all people lmao.

I'm much more likely to give you, and am indeed known for, long dramatic 4000 word essays on why something failed and I hated it, than I am a gush essay-- so enjoy this rare occurance of the latter in the wild!
:P

I should do the latter more frequently but it happens so much less and the former is so much more prolific and I like analysing too much ... 😂😂

Ohhh there's a lot of this in makjangs, thrillers, and legal dramas. Let's see :

- Vincenzo and Choi Myung Hee + Jang Han Seok in Vincenzo - similar to Why Her, but even more intense - with Han Seok being a frenzied psychopath. Will kill you without blinking an eye.

- Hong Ji-A in Sell your Haunted House - Jang Nara kick some ass and holy crap, she potray the badass-ery very well! Would love to see Jang Nara in this kind of role again

- And finally, Joo Dan Tae in Penthouse - the villain to end all villains

And that's just in the last 2 years! There should be more from older dramas. Its just there are so many thrillers and revenge dramas lately that this kind of "shark" archetype characters are literally everywhere ...

Q: Why do sharks not attack lawyers?
A: Professional courtesy.
Ba-dum-dum. 😆👩🏻‍💼⚖️🦈🥁

The veil. I thought our heros are a small group and needed more help
L.U.C.A:The beginning. I thought the organization is too big and to stop them we need equally strong power. In the end, their power just transformed to another organization
The silent sea: Existance of the lead girl and two astronaut wasn't definitely enough to stop researching on ...
38 Task force: To avoid going to prison definitely a big bady was needed.Of we had it, we could even change the ending although it wasn't totally bad
athena: No need to explain I think
Bridal Mask: I hope we had bigger organization on our side
The smile has left your eyes: 👀If ee had more power on our side we could have a happy ending
Duel:I hated the twin's lonliness and lack of power
D.P :A high ranking official👩‍✈️👮 could sort this mess ... I mean it was horrible.
Hellbound : Humans 🙍 were completely helpless
Squid 🐙 game:I thought a single police officer couldn't do anything