In the Soop: Friendcation: Episode 1 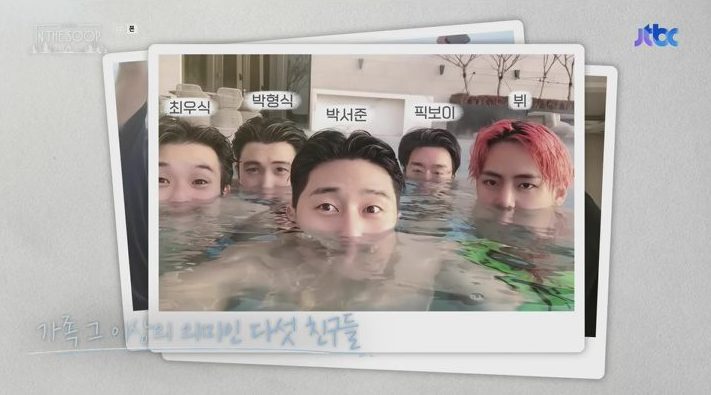 In the mood for a relaxing watch that feels more like you’re hanging out with your favorite celebrities, who all happen to be BFFs? Pull up a chair and join me for In the Soop: Friendcation, which follows the famed Wooga Squad on a short but memorable winter trip that promises to be full of laughter, inside jokes, and those warm and fuzzy feelings you get from hanging with friends who feel like family. 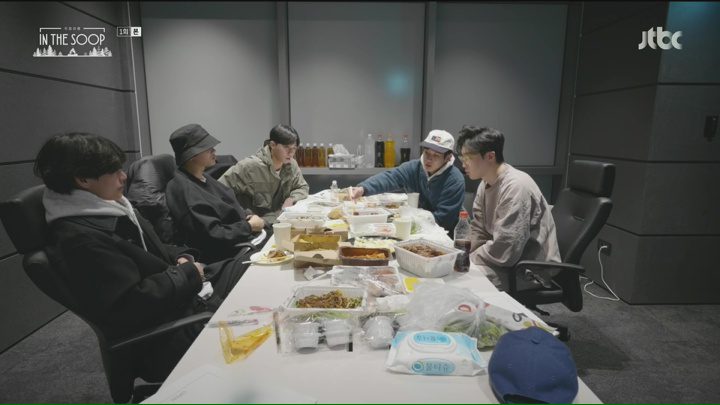 Even if you’re not familiar with the Wooga Squad, you probably know one (or more) of its members, most of whom are mega stars both in and outside of Korea: actors Choi Woo-shik, Park Hyung-shik, and Park Seo-joon, along with BTS member V (Kim Tae-hyung) and musician and producer Peakboy (Kwon Sung-hwan).

In this latest spin-off of the In the Soop series, the squad heads to Goseung in Gwangwondo province for a 4-day 3-night getaway, where they are tasked with the very difficult job of having fun and making memories (albeit, in front of a lot of cameras for the whole world to see.)

One of the main draws of the show is getting a front row seat to the endearing, everyday dynamics between the five friends, who describe themselves in terms of family. Seo-joon is the dad who provides emotional support; Hyung-shik is the kind and gentle mom; energetic Peakboy is the youngest daughter; Woo-shik is the caring eldest; and V is the baby of the group. 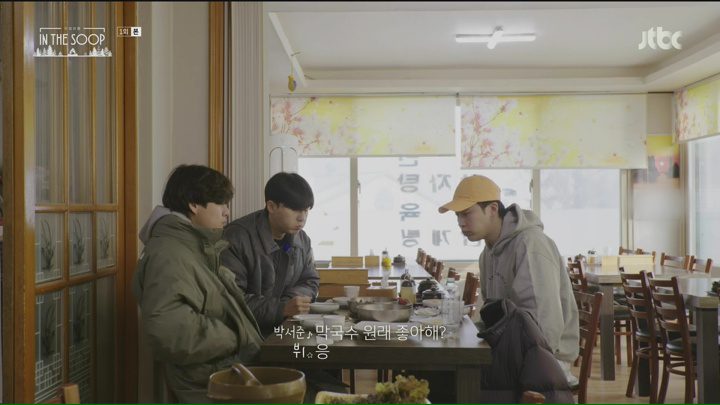 We see the guys settle naturally into these roles on day one of the trip, when Seo-joon, Peakboy, and V head to Goseung (due to schedules, Woo-shik and Hyung-shik are set to arrive later). Seo-joon takes the wheel for the drive and after a while, the trio stops for lunch. We’re treated to a bunch of close-ups of each dish they order, from pork belly slices to potato pancakes to heaping bowls of noodles… and great, now I’m starving.

Aside from the mukbang, it’s cute to see all the ways Seo-joon and Peakboy treat V like he’s really their youngest sibling. There’s the constant teasing, of course, but there’s also the way the older guys are always game for whatever’s on V’s mind.

One of the highlights of the lunch, for example, is watching V struggle to place a familiar tune he hears from a restaurant worker’s cell phone. Seo-joon and Peakboy jump in to help solve the mystery, going as far as asking the ajumma for her number (lucky her!) to record her ringtone and try to identify the song. (V gets it in the end – it’s Humoresque by ​​Dvořák, and now our trio has a soundtrack for the last leg of their trip.) 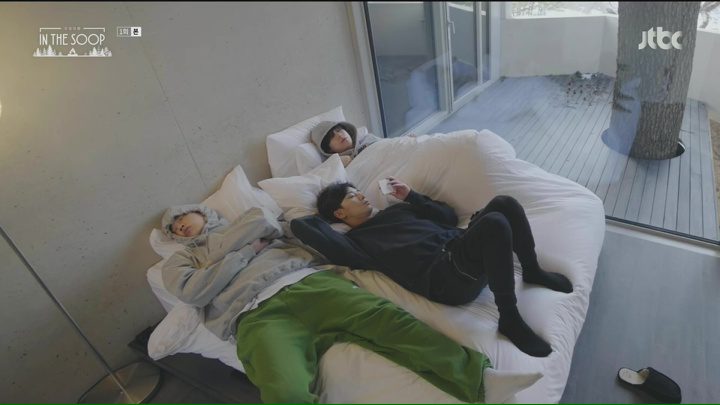 Once the three arrive at their vacation rental, they take us on a tour, providing a preview of what’s in store for the next few episodes. There’s a nice outdoor space (a necessity for their daily plans to veg out in front of a roaring fire), along with a luxurious indoor pool and a game room filled with all sorts of goodies. Each guest is also treated to a welcome kit, which to my delight includes matching outfits.

The guys decide to all sleep in the same room and unpack their luggage. Afterwards, they all curl up together in bed for a nap, because traveling is tiring.

It’s close to dinner time when the three wake up, so they head out to get groceries. Seo-joon is head chef for the night, but before the group starts cooking, they change into their matching sweats. 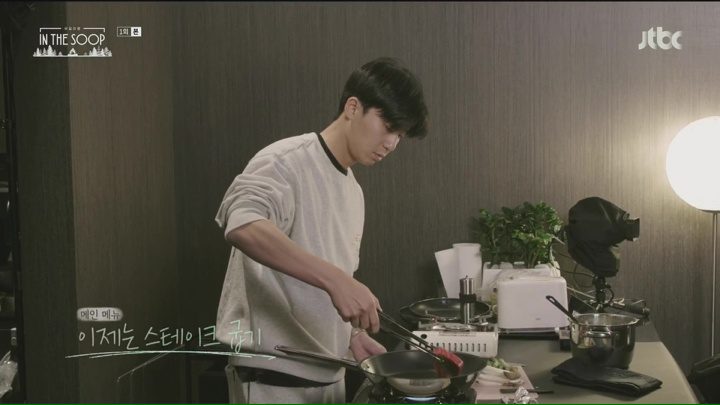 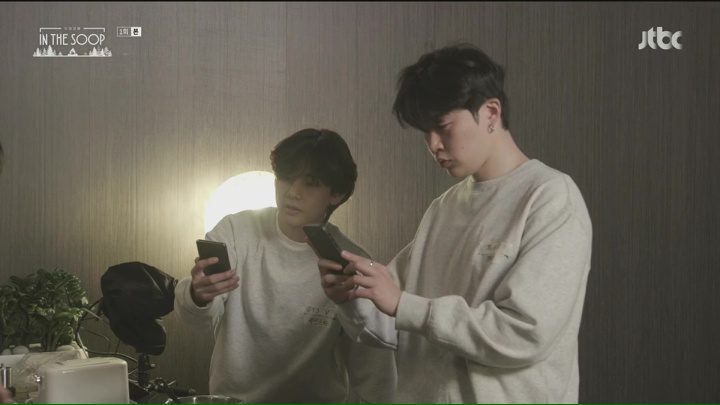 In between kitchen tasks, the guys decide to add labels to their sweatshirts with their names and nicknames they make up on the spot: Seo-joon is “clown,” Peakboy is “giant,” (he’s apparently 193 cm tall!) and V is “world star.” They find these newfound monikers hilarious, and decide to write them in even bigger lettering on everyone’s backs, along with their birth year. So they’re just going to write, in marker, all over their new outfits?

As Seo-joon finishes up dinner preparations, V and Peakboy are adorably impressed at Seo-joon’s know-how in the kitchen, whipping out their phones to capture him in action. And though Seo-joon says he’s not a very good cook, the final product looks delicious, and everyone scarfs down the food.

After cleaning up the kitchen, the guys find themselves in the game room. They bring out a Go board and take turns trying to flick each other’s Go pieces off the board. There is a punishment for the loser, of course: the classic forehead flick. Peakboy ends up on the receiving end twice in a row, and the three lose it afterward, collapsing on the floor with laughter. 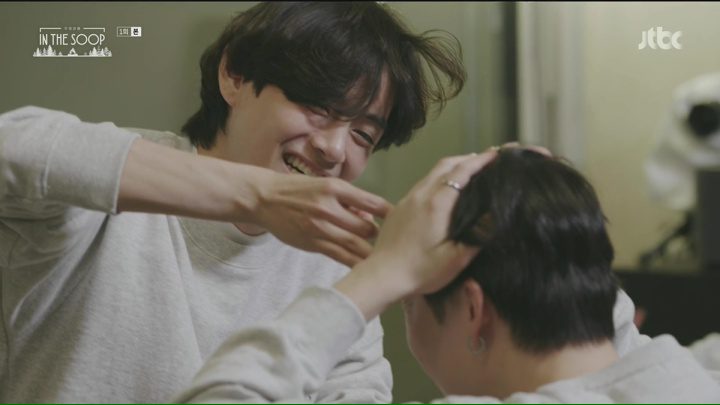 All of that activity ends up making the guys hungry again, so they head back to the kitchen for a late night snack. As the food’s cooking, Woo-shik arrives, closing out the first episode. Hopefully, Hyung-shik won’t be too far behind, and we’ll get some good, quality time with our Wooga Squad in full strength next week.

What I appreciate most about the In the Soop series is that it’s very much designed to give both the cast and its viewers some form of reprieve from the hustle and bustle of everyday life. As a longtime ARMY and fan of the three actors in Wooga, I’m glad to see that this version is set to deliver on what I’ve loved from previous seasons: the quiet, silly, spontaneous, and joyful moments of spending unstructured, unhurried time with people you truly like, where you can actually witness the bonds of friendship being strengthened. Here’s to living vicariously through our squad as they continue their friendcation over the next few weeks! 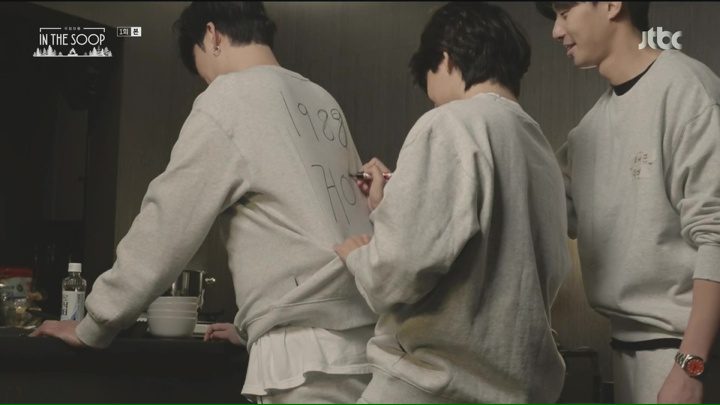 Thanks for the recap @chocolatte! My favourite thing about the Soop series has always been the laidback and day-in-the-life style of it, interrupted by fits of giggles. Nice to see that stays consistent here too. Looking forward to when Woo-shik and Hyung-sik are in the mix too.

Tysm for the recap, from a fellow ARMY! Can't wait to see the second ep, when "mom" and "eldest" round out the dynamic.

This is on my to watch list, I just enjoy watching them celebrities be themselves. Especially after all their busy schedules, they must be loving this time to relax.

Planning to watch as soon as I have time! Thanks for the weecap.

☹️ I want to watch this.

Several accounts uploaded it on YouT**e.

Thanks so much @larelle79! Do I remember right, are you in StL? Are you ok after the rain?

I'm fine. The water leveled off where I am at.

Oh good. I’m in U City and escaped the River Des Peres but it got close.

what a fun surprise! thank you for including this in the itinerary! so fun to be in on what they do to relax! V's the one to get me started on BTS and i love the actors here except for Peakboy who i need be introduced to! love it!

the only thing i have trouble with is i really want to sneak inn there and pack up all the leftovers! feast time every day! its fun to see who can cook too!

I loved that pool pic when it came out a few years ago.

The slap. I almost feel out my chair too, I was laughing so hard. You knew it was coming but it still felt like it came out of nowhere.

Wow! This is a sweet surprise for me because I have been a Kdrama watcher since the end of 2014 and I was not aware that these people were close friends😅😅 Being a person who starts series without reading the premise, I assumed it was a drama until @miso2019 posted on fan wall about it being a variety show and I immediately lost interest because I have to make time to watch multiple episodes. I watched ep 1 out on a whim and now, I'm invested. I want more details of the history of their friendship because I found it cool that they even have a name for their gang which meant celebrities can have other celebrities as BFF without being egoistic. Of course, all these people are individually well know, though I know nothing about Peakboy, but apart from Lee Jung Jae and Jung Woo Sung, there are few celebrity friendships that is long standing. Recently, while watching "Link: Eat, Love, Kill" , I came to know that Yoo Jin Goo and Moon Ga Young were childhood friends but they weren't in touch much until Link drama. So, this Soop series is a nice way to show the public celebrity friendship without snooping too much into their private lives.

I always think it is funny that celebrity friendship groups have names. Another one I know is The Dragon Club with Jang Hyuk, Cha Tae Hyun, Kim Jong Kook and a couple others that goes back 20+ years. They had a show similar to this a few years ago. Then there is the Jo In-Sung crew, though I don't think they have a name.

Whoa! Jang Hyuk and Cha Tae Hyun are buddies? They seem like opposite personalities, I can't imagine how their interactions would be😂😂😂