A man with terrible luck meets a young woman who's able to change his fate. She has mysterious powers over people's destinies, and as he becomes involved with her, he learns more about her powers and her past.

A man with terrible luck meets a young woman who's able to change his fate. She has mysterious powers over people's destinies, and as he becomes involved with her, he learns more about her powers and her past. 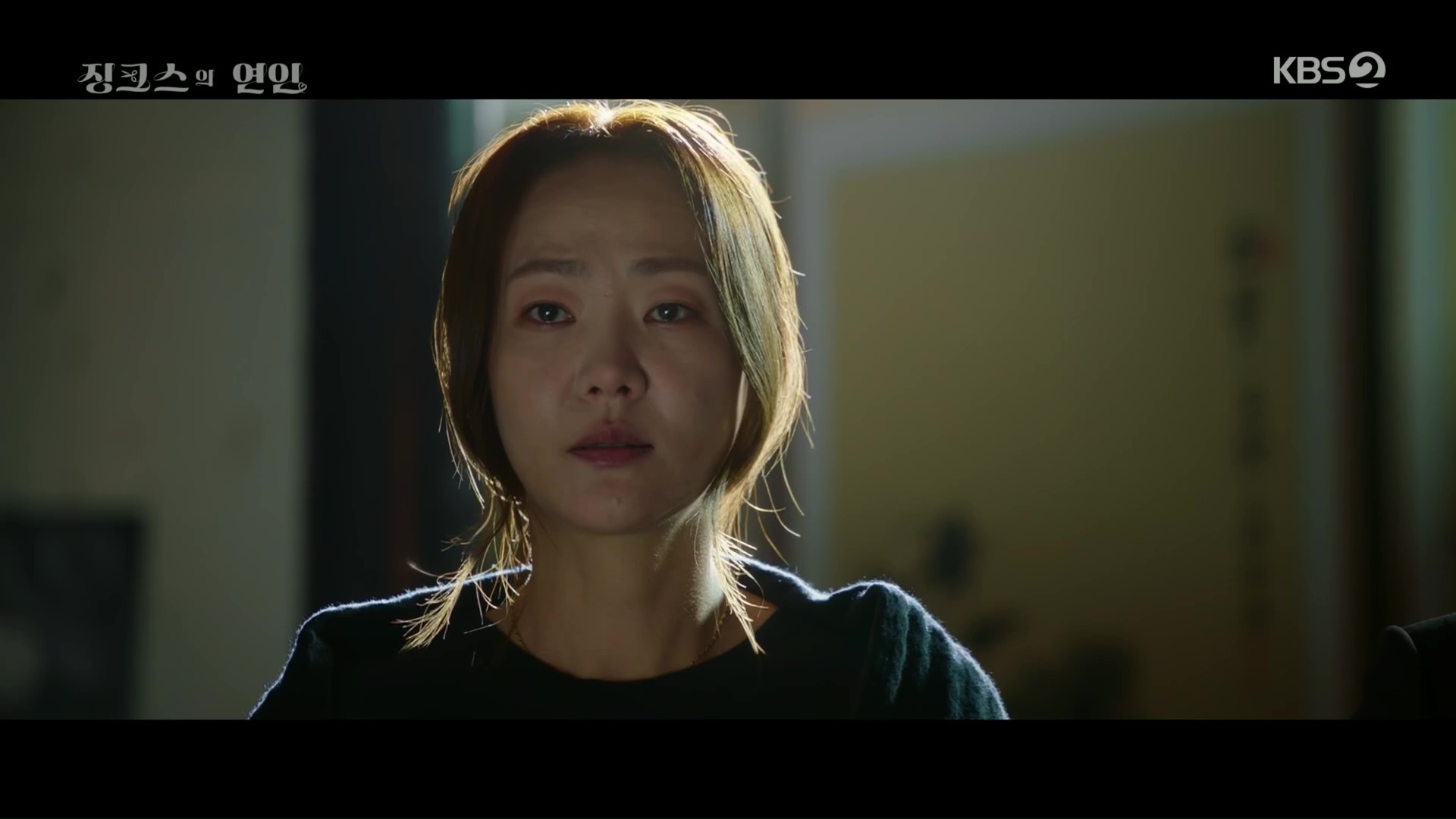 New revelations burst out left and right, overturning many of our characters’ beliefs about both past and present – and informing their carefully-laid plans for the future. 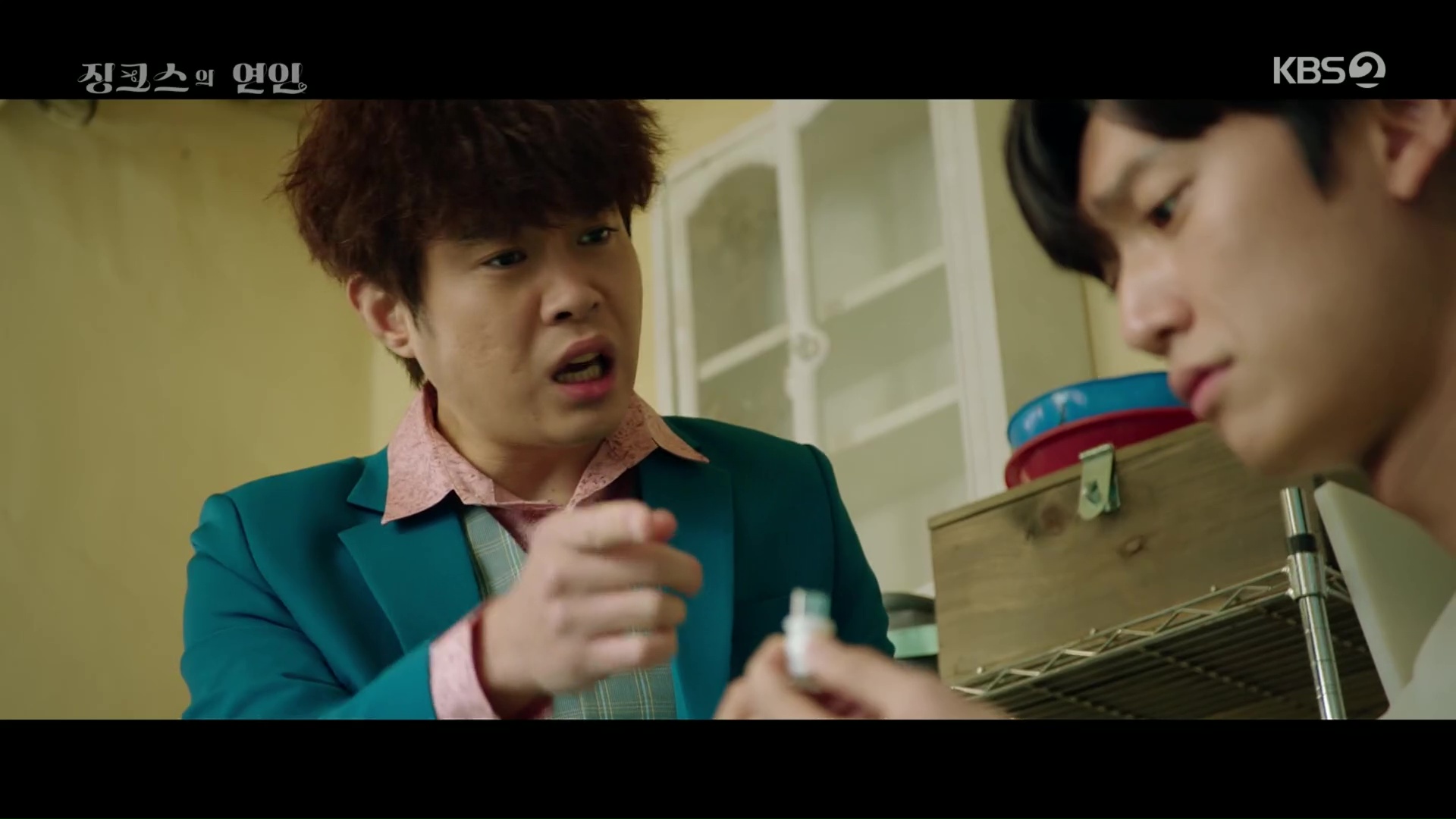 Per Seul-bi’s instructions, Yoon-ho swipes a USB from his former gang boss’s abandoned possessions and delivers it straight to Su-kwang. The video file it contains shows the real person who ordered the hit on Su-kwang – not Chairman Sun, but his brother, Il-joong.

But that’s not all. The person tasked with the murder itself was none other than the fisherman who saved Su-kwang, whom he now considers a father figure. So why didn’t he follow through, and why did he help Su-kwang start over with a new identity? 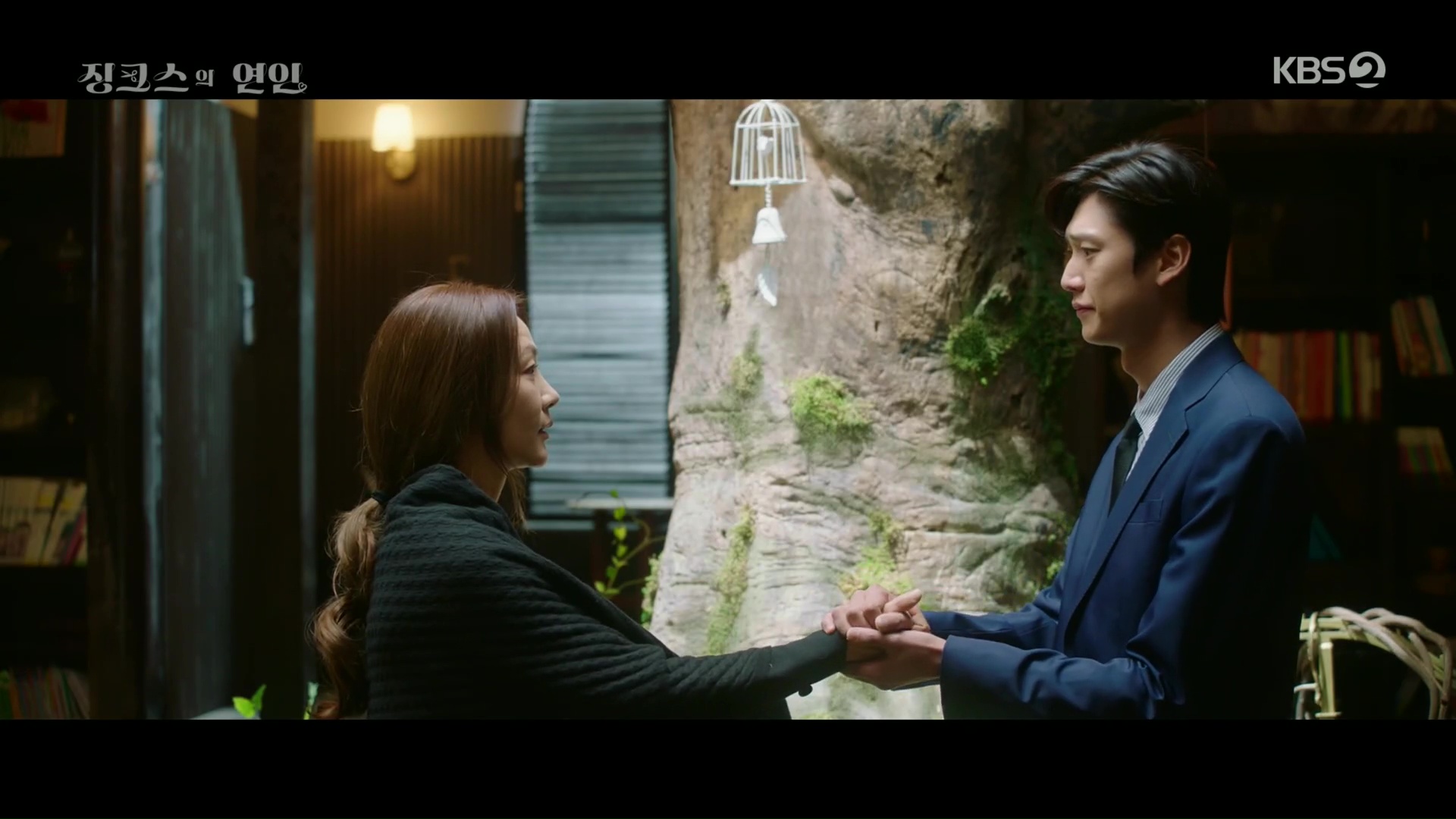 Well, that ties into a whole slew of confessions about what actually went down 22 years ago. Basically, everything we were led to believe is wrong. And to go along with all the topsy-turvy twists, our characters’ motivations and responses are all turned upside-down and backwards, too.

The reveals tumble out gradually over the course of both episodes, so that by the end I’m not fully sure who knows exactly how much, but the gist of the story is as follows. 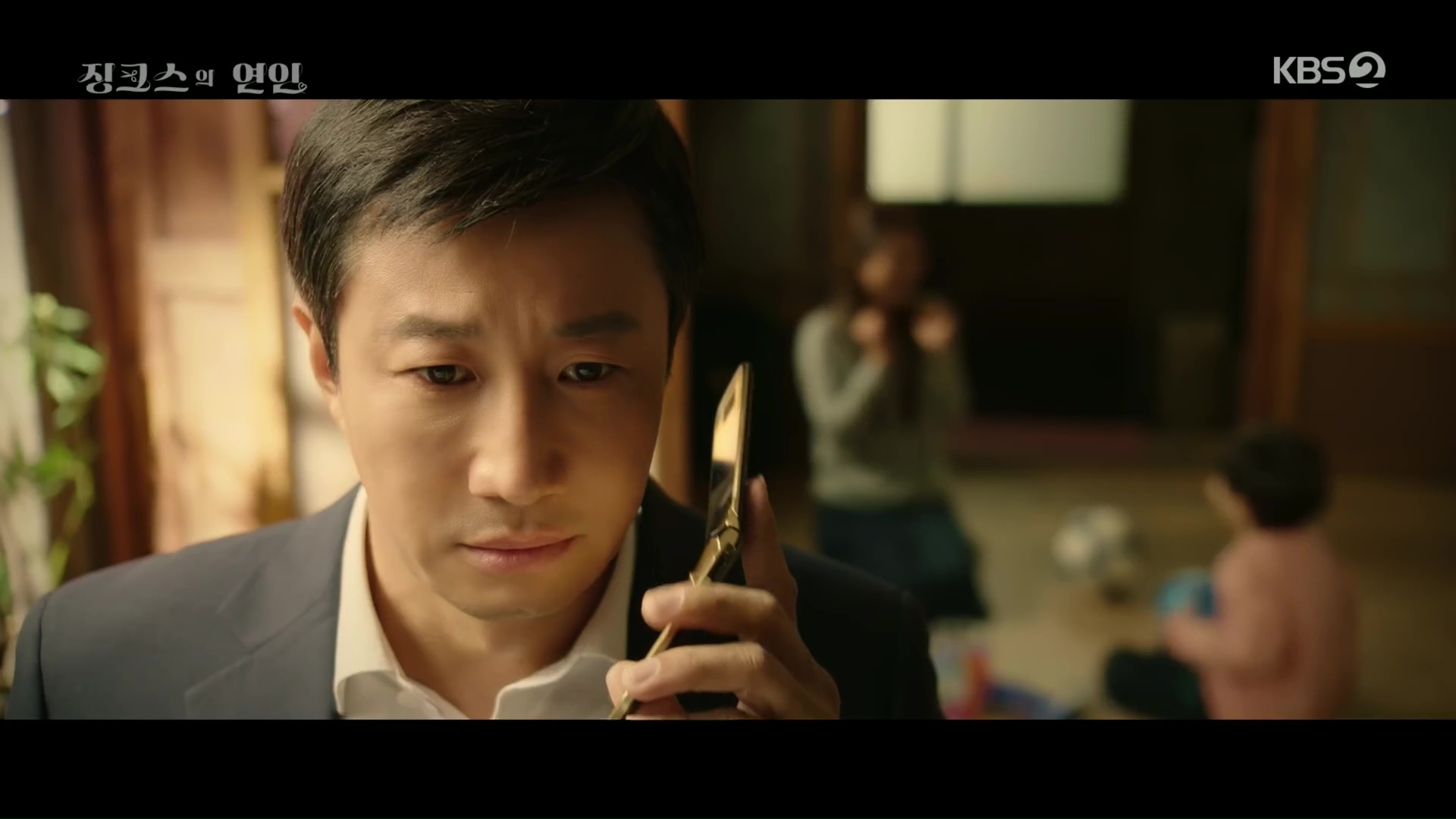 As Seul-bi hinted last week, Hyun-tae, the man who believes he’s her father, isn’t actually her father. (Three guesses who is.) Upon becoming pregnant, Seul-bi’s mother Mi-su hypnotized Hyun-tae into believing they were in love and expecting a child together so he would help her run away. While on the run, they briefly stayed with Su-kwang and his mother before a call from Chairman Sun’s father convinced Hyun-tae to turn Mi-su over in exchange for cash.

But it was a trap, as the then-chairman ordered the fisherman to intercept them and kill Hyun-tae. Mi-su stopped him by reading the future – Su-kwang’s tragic future, to be exact – and giving him two instructions: go home right now and stop his son from burning the house down, and then repay her 20 years later by saving the young man he would be ordered to murder. 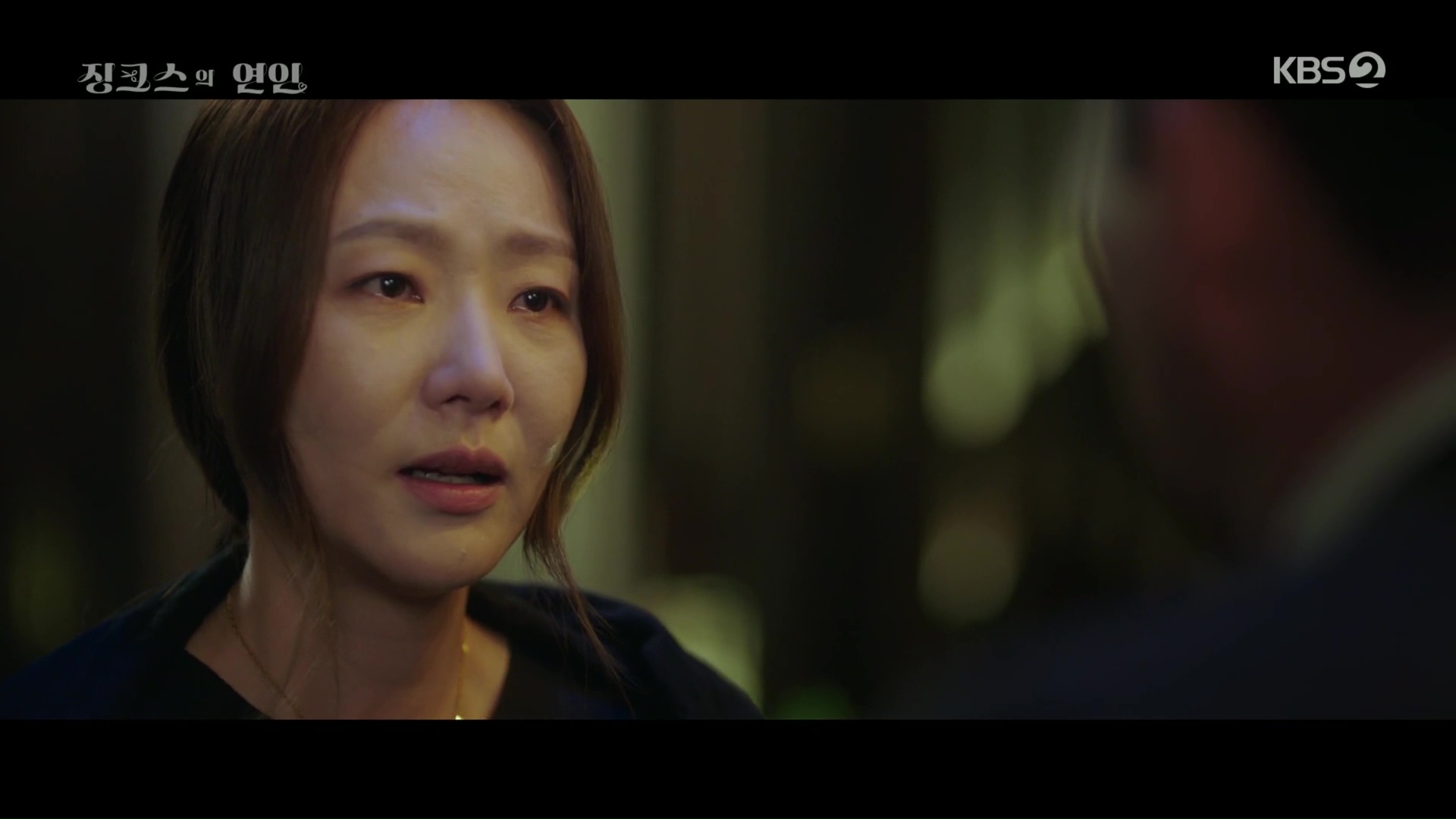 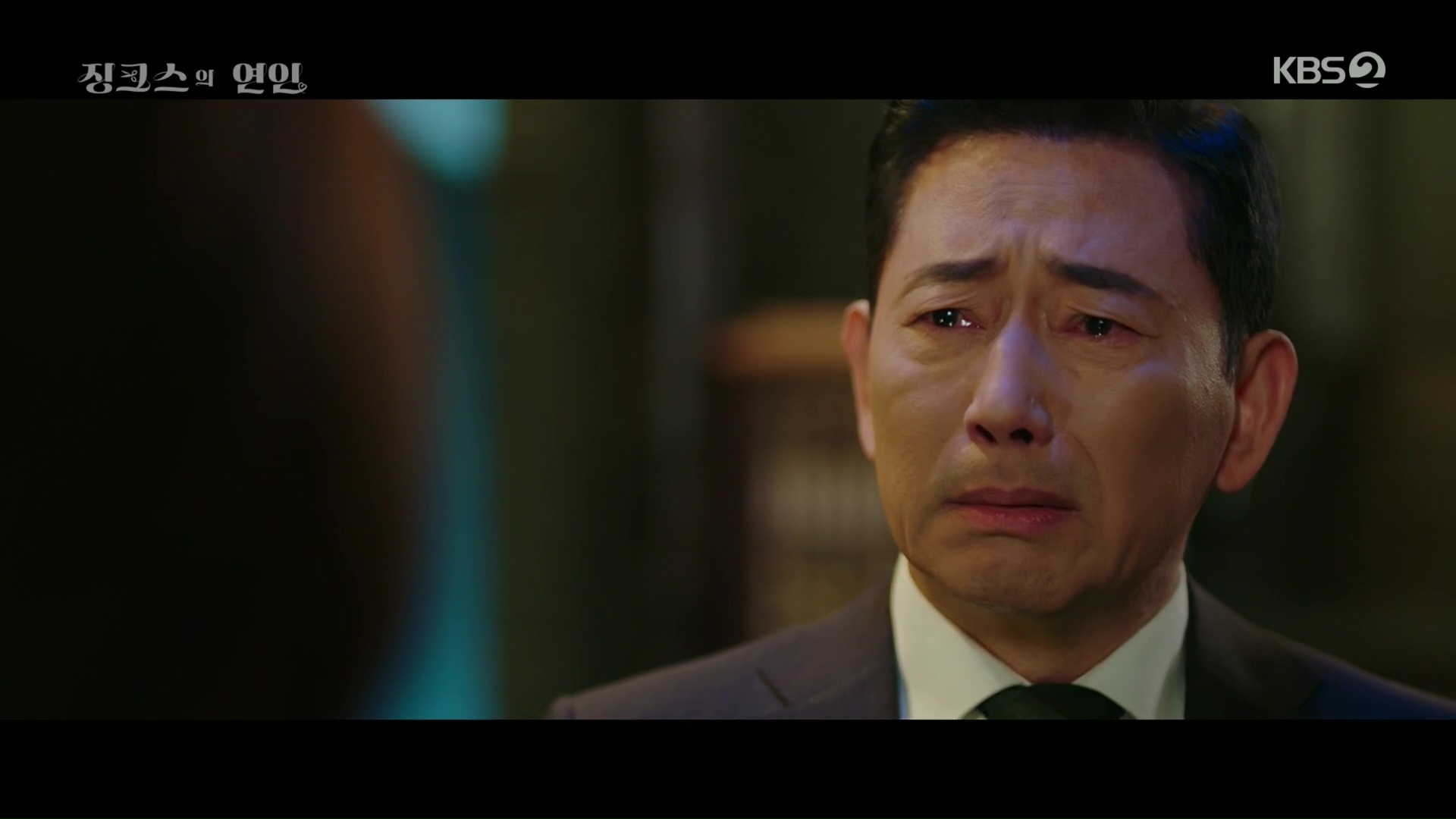 Now, seeing a change in Chairman Sun’s actions and attitudes, Mi-su confesses to him that Seul-bi is his daughter. But if Seul-bi also knows, it doesn’t change her hostility toward him one bit.

While he tries to be as nice to her as possible, she deflects his gestures with biting sarcasm and pointed comparisons about him and his brother – all rather refreshing, except that it feels like the show is trying to make us believe Chairman Sun was never evil, only misunderstood and misled. 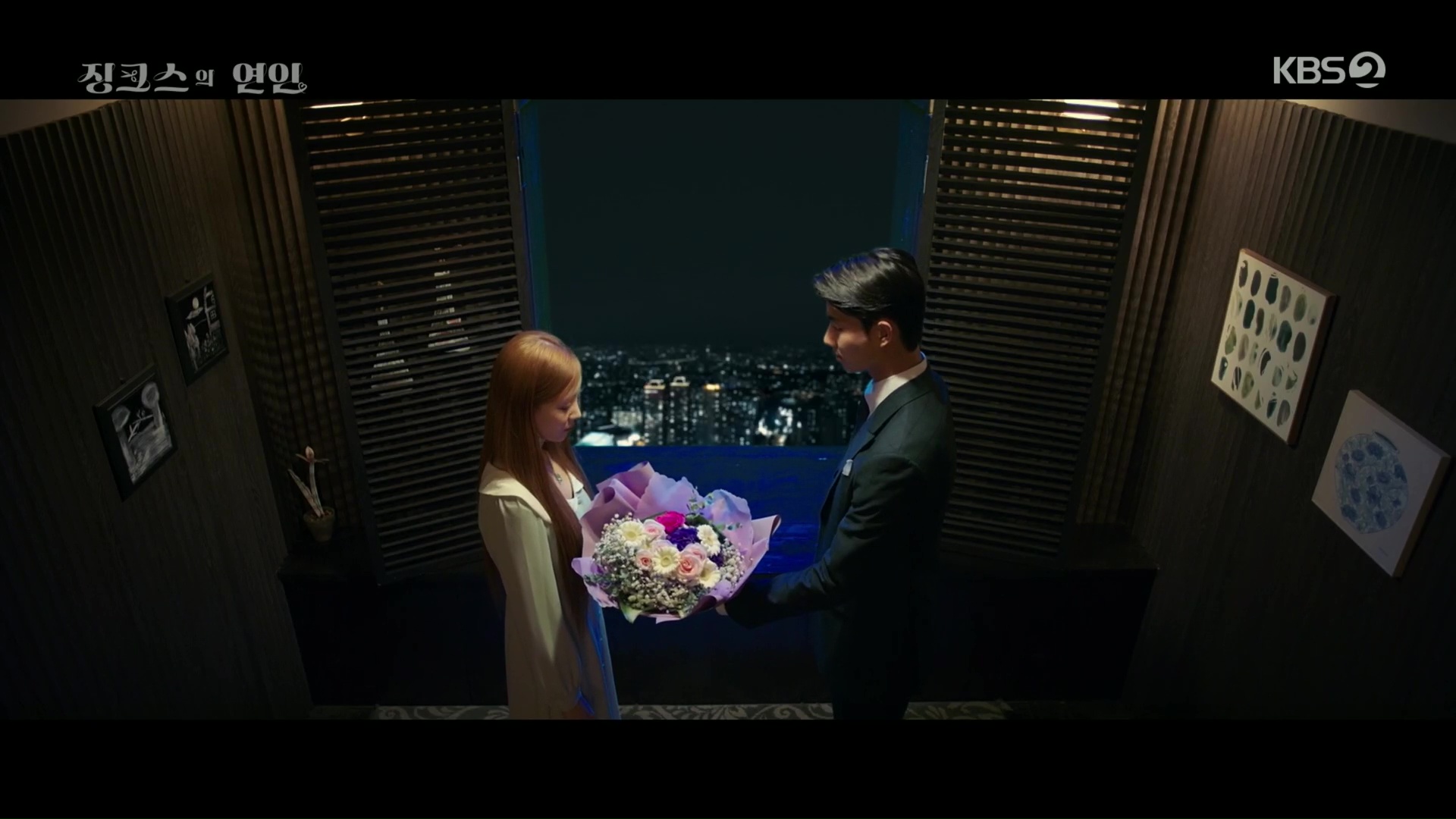 The whole half-siblings thing makes Min-joon’s obsession with Seul-bi even more frustrating and uncomfortable, but apparently nobody thinks it important information for him to know. Instead, Mi-su gives him vague warnings that he and Seul-bi can never be together. (After all, if Min-joon knew the reason, we’d have to find some other source of conflict, wouldn’t we?)

So Min-joon continues pursuing Seul-bi. Following up on a request he made before, he asks to be her boyfriend and tries to lean in for a kiss. To his small credit, he sees that she’s not happy and immediately stops, apologizes, and promises not to try again if she doesn’t want him to.

Oddly enough, my favorite scene of the week did involve Min-joon, though. He and his fiancée shared a sweet moment at his mother’s grave where they reminisced on shared memories of her, and it felt like a genuinely touching bit of connection between two real people. 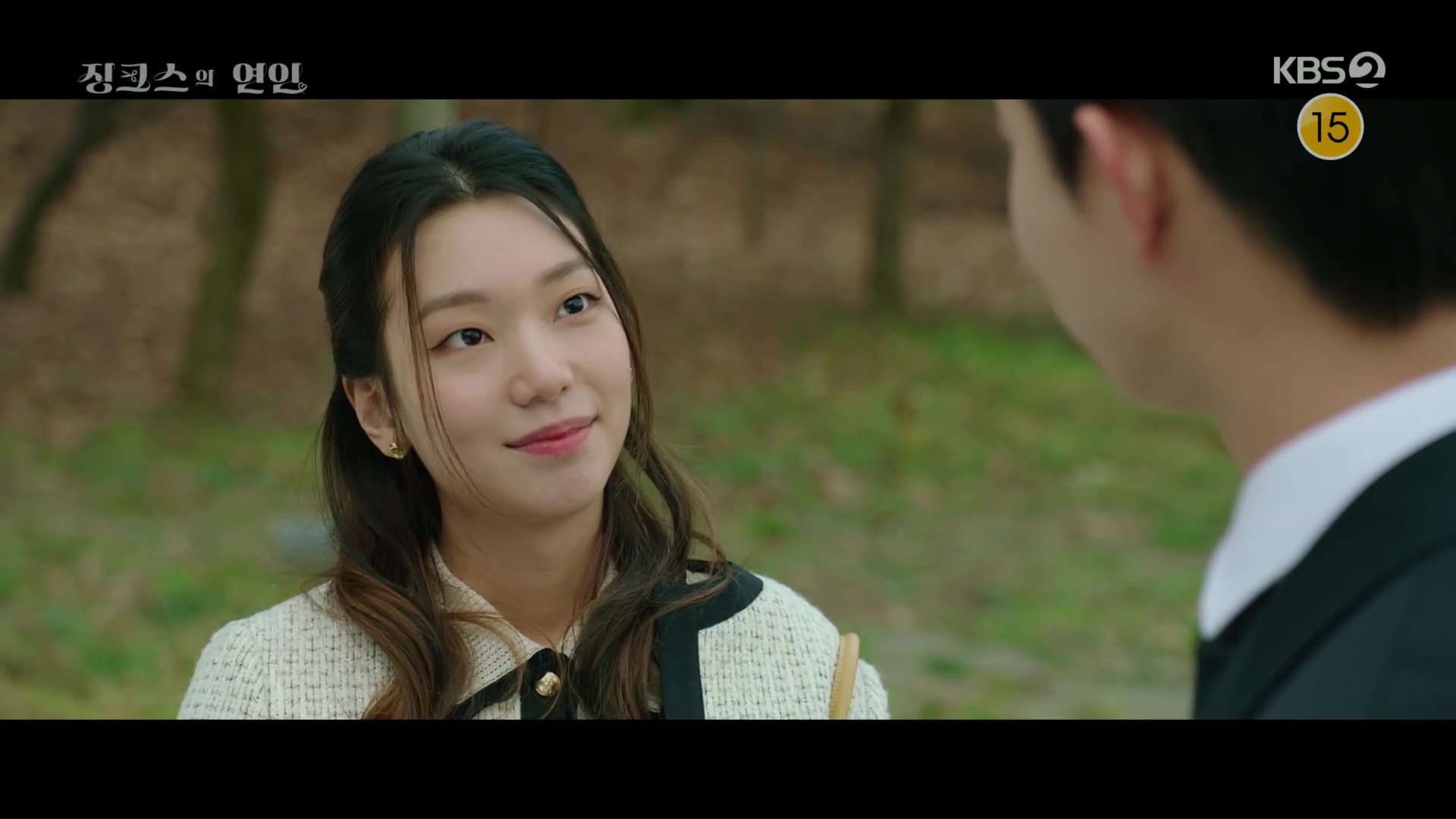 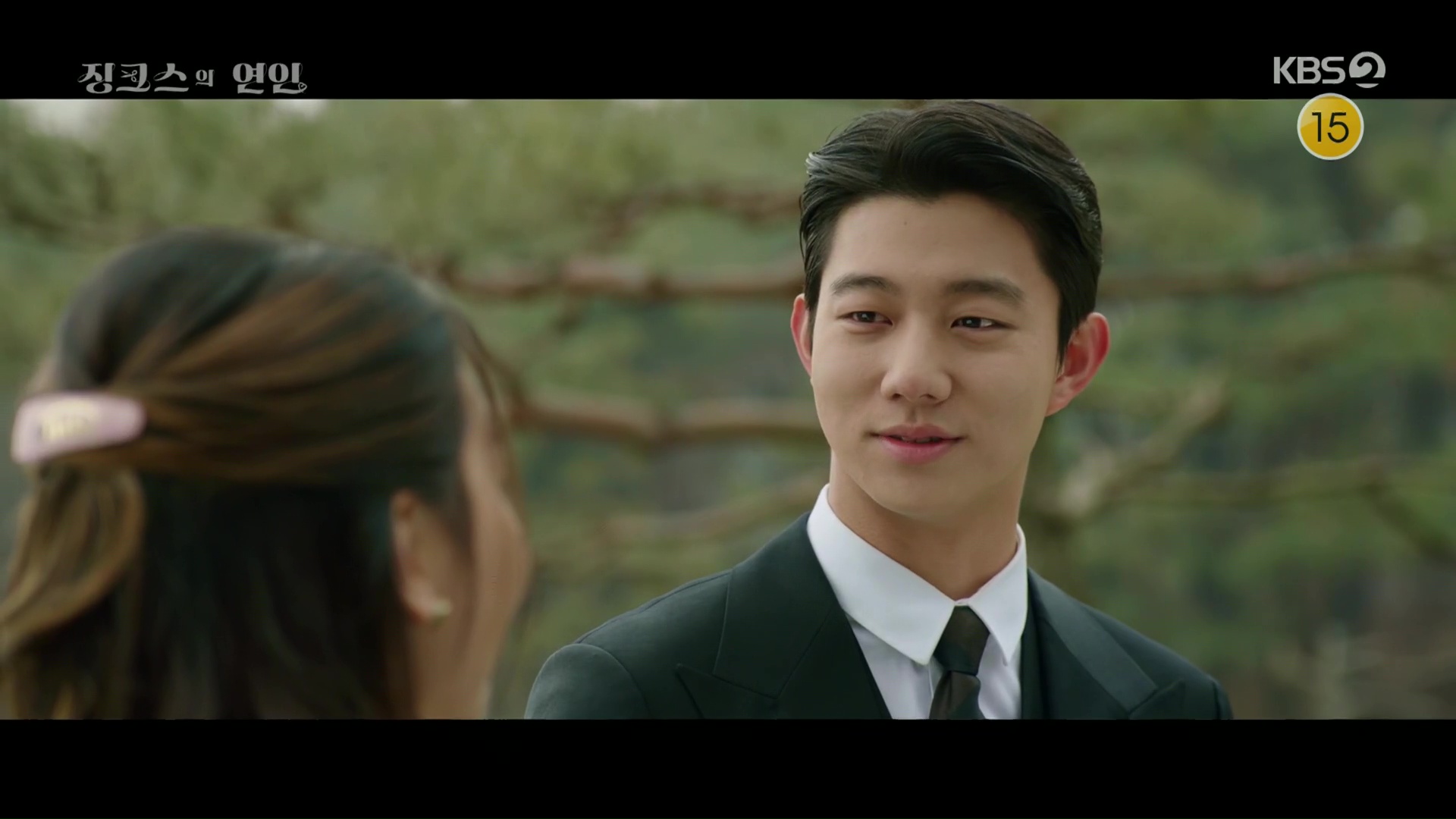 Meanwhile, having learned who really tried to kill him, Su-kwang embarks on a plan to take Il-joong down, with the help of not only Yoon-ho, but also Mi-su and Chairman Sun. To that end, Chairman Sun hires him as his new assistant, and Su-kwang takes Mi-su to visit Hyun-tae so she can finally set him free of the hypnotism she put on him all those years ago.

They also visit Ok-jin, who again warns of Seul-bi’s imminent and dire fate, adding that the only way to break the cursed cycle of the shamans is to destroy Geumhwa Group and cut off the chain completely. 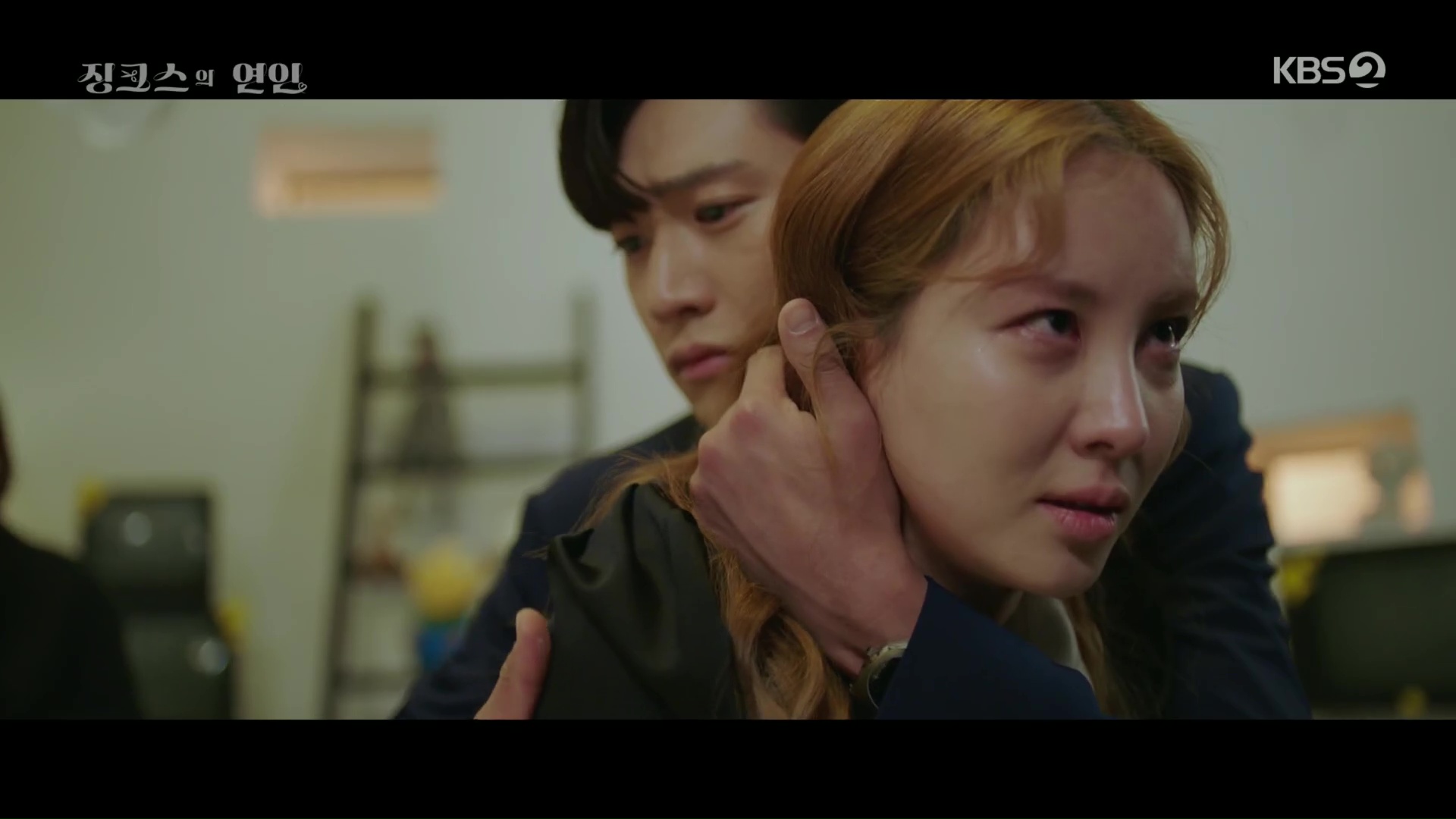 And they’d better hurry, because Seul-bi is showing the first signs of becoming a witch. When Il-joong takes her to his father in the mental hospital, wanting to know when the patriarch will die and how he can get his hands on Geumhwa Group as his inheritance, Seul-bi suddenly turns dark and ominous, announcing that one of the former chairman’s descendants will take the curse for her.

Later, in a wild, uncontrollable fit of tears and laughter, she lunges at Min-joon, declaring him the one doomed to bear her curse. Yikes. 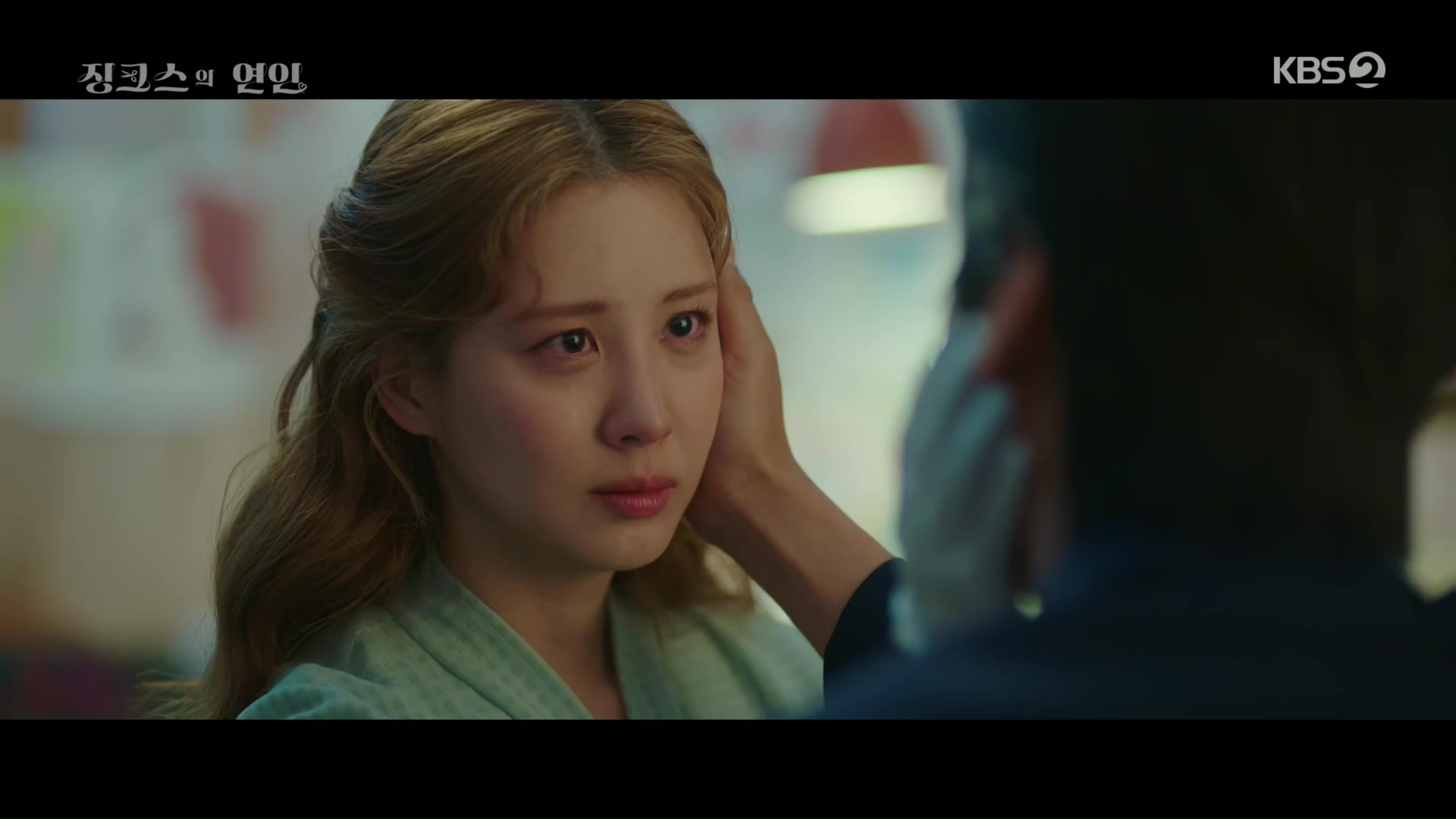 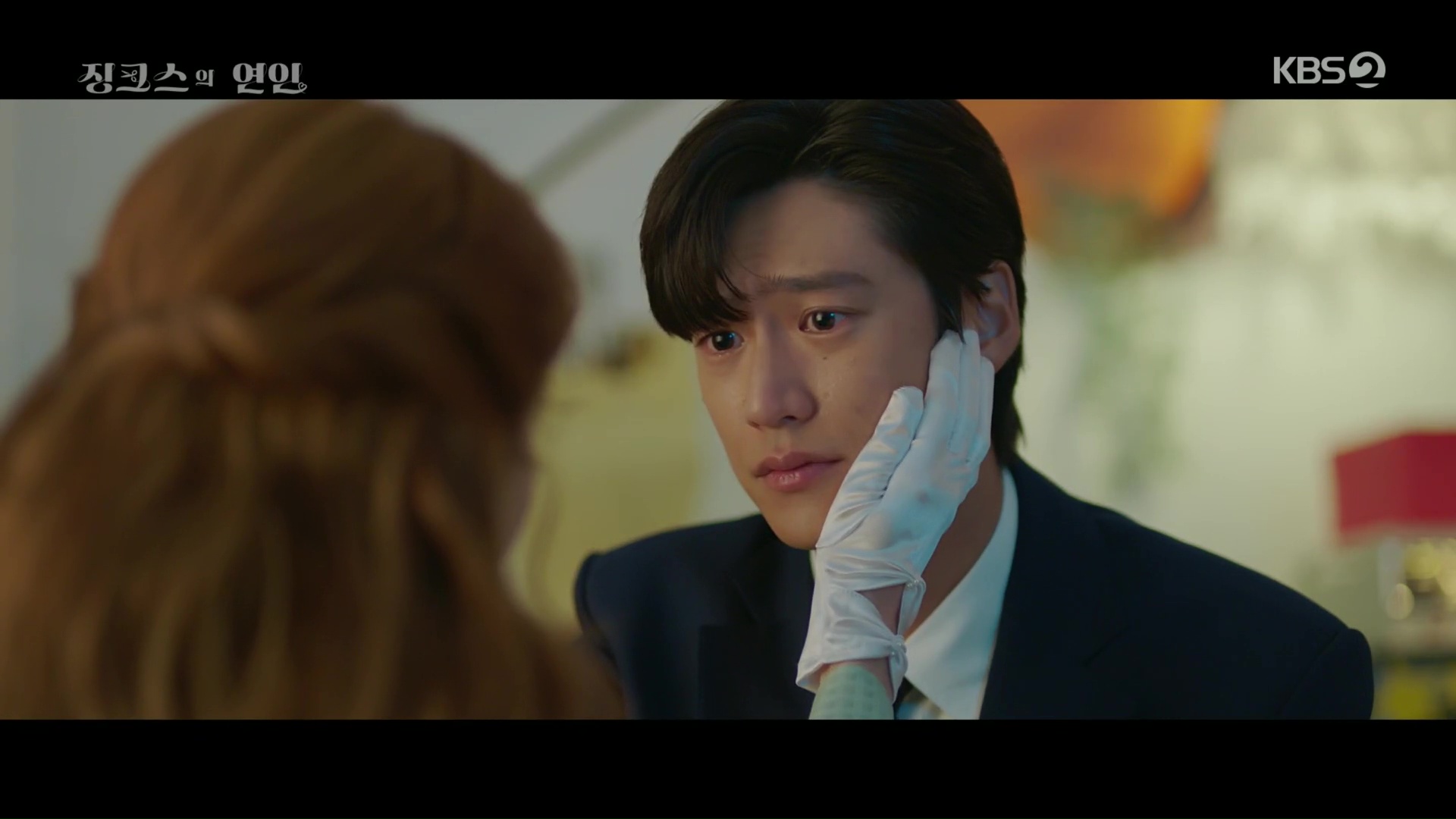 Su-kwang is there to hold her back, and comforts her after she returns to herself. Then they finally address where they stand: she’s trying to find a way to protect him, herself, and her mother once and for all; he asks her not to put herself in more danger than necessary just for his sake.

Having made up, they share tender kisses that Min-joon sees through the crack in the door. He looks more hurt than angry, and slowly turns away.

But now, onto the plotting, because our lead players are cooking up a bunch of schemes to engineer (hopefully) happy endings for themselves and their friends.

Twice, Seul-bi calls in favors from the marketplace shopkeepers to do what they do best: be loud, annoying distractions and keep Il-joong from getting his hands on important people and information. 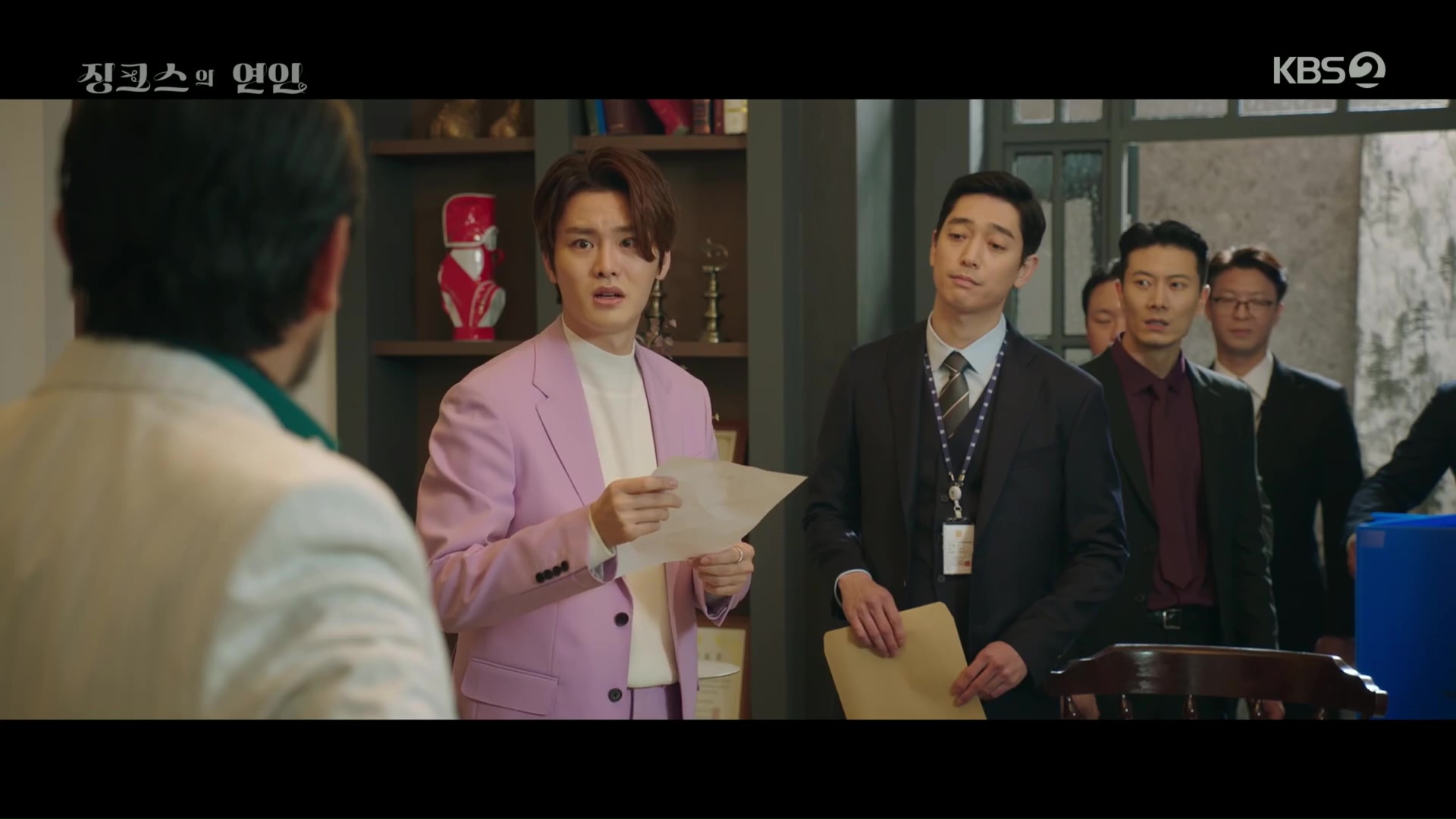 Then, using one of Seul-bi’s visions, the team has Ok-jin approach Il-joong and convince him to invest in a company that’s about to have its assets frozen. Il-joong and Dong-sik are subsequently plunged into debt and legal troubles, meaning they’ll likely be forced to sell their shares in Geumhwa Group. So much for their big plans of taking over the company.

But what Chairman Sun doesn’t realize is that Su-kwang, Seul-bi, and co. haven’t saved Geumhwa Group – they’re setting events in motion to bring it crumbling to its knees forever. 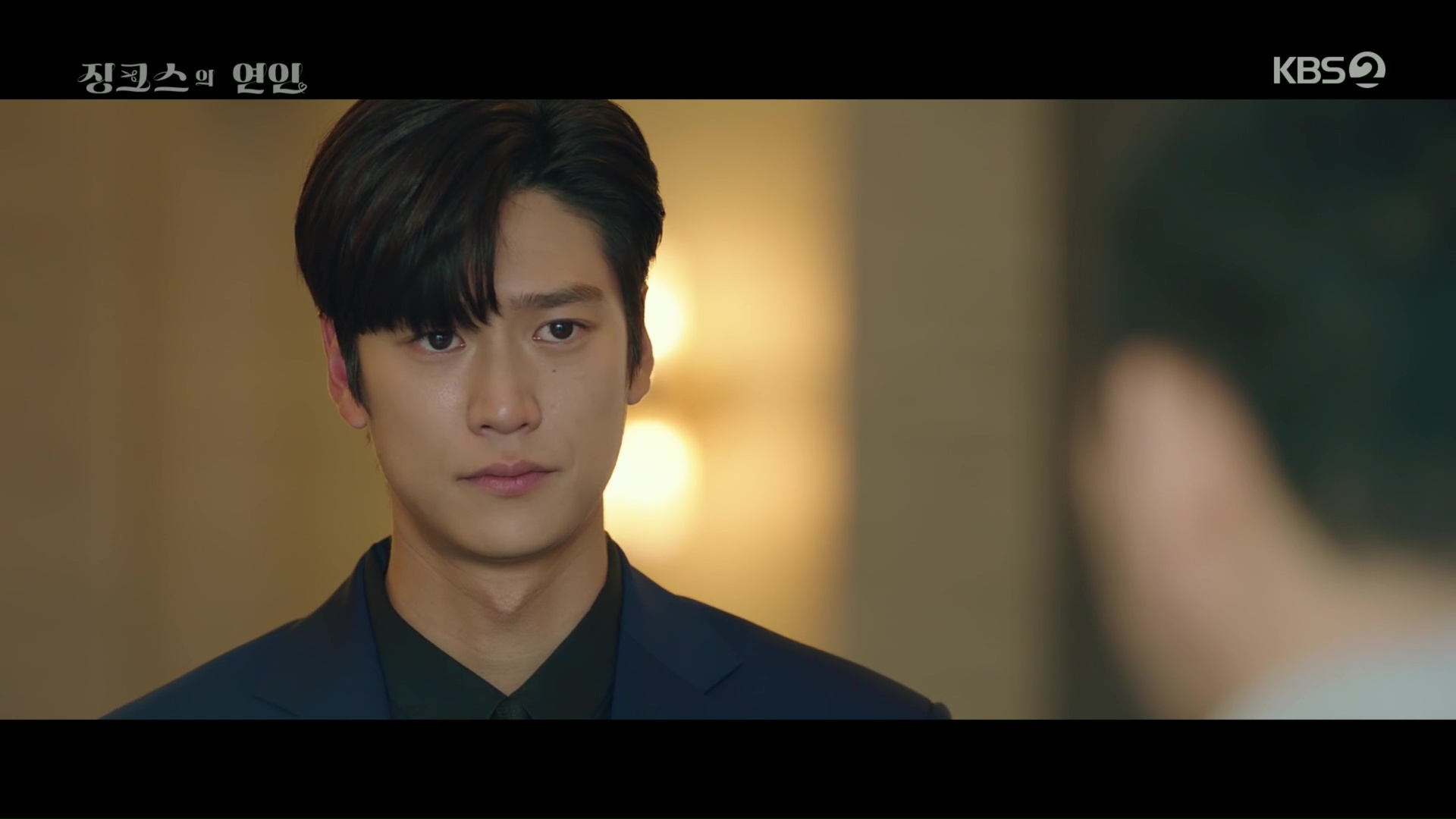 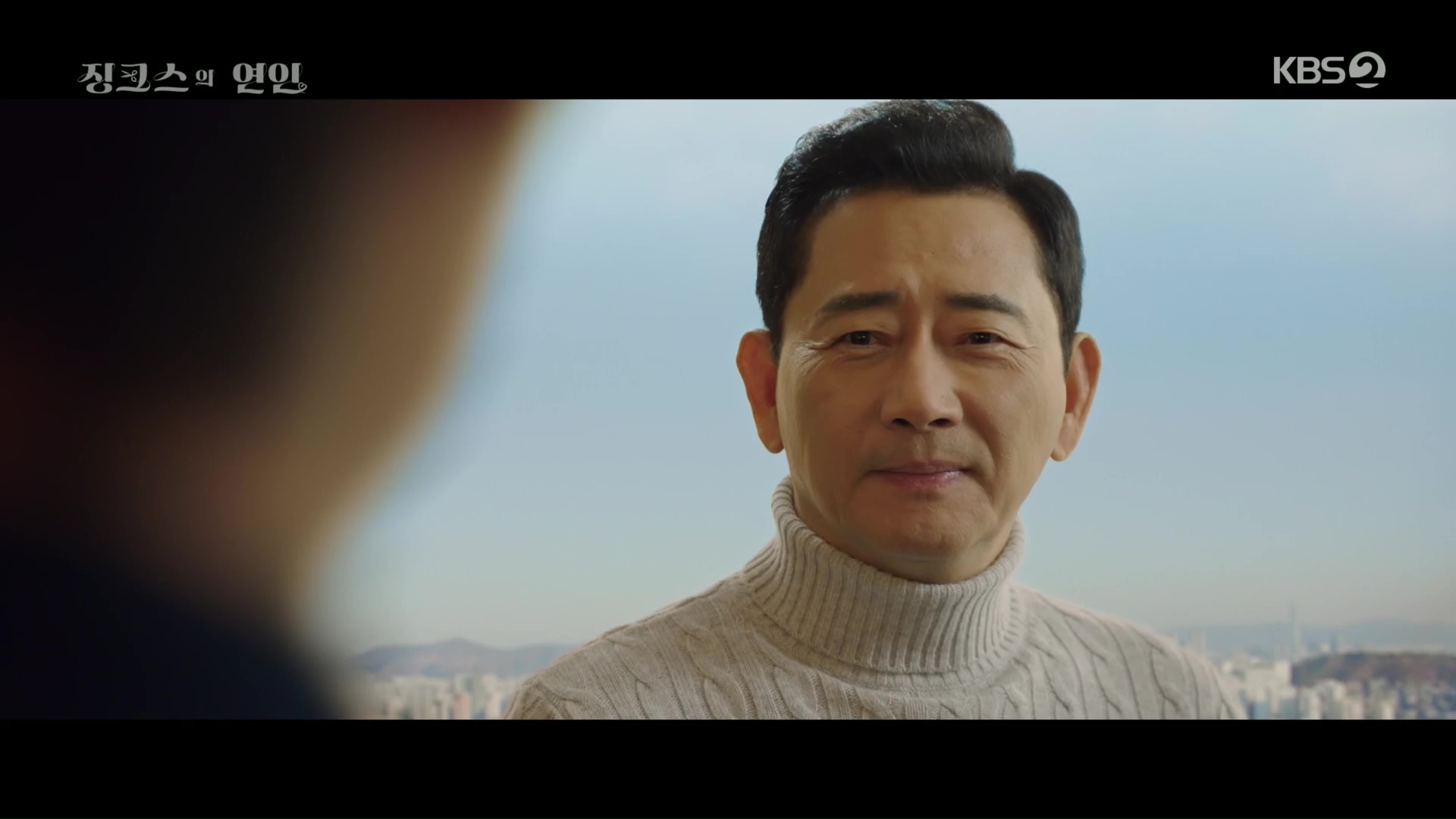 It’s a bit hard to see something as boring and seemingly tangential as preventing corporate takeovers being the key to saving Seul-bi from her own magical powers, but given all the time we continue to spend with the shopkeepers, I guess I shouldn’t be too surprised.

Still, I’d like a bit more clarity on why Seul-bi can’t – for example – find a priest of her own to break her necklace. Why wouldn’t the last remaining descendent of the shaman line renouncing her powers in that way effectively “cut off the chain,” as Ok-jin described it? 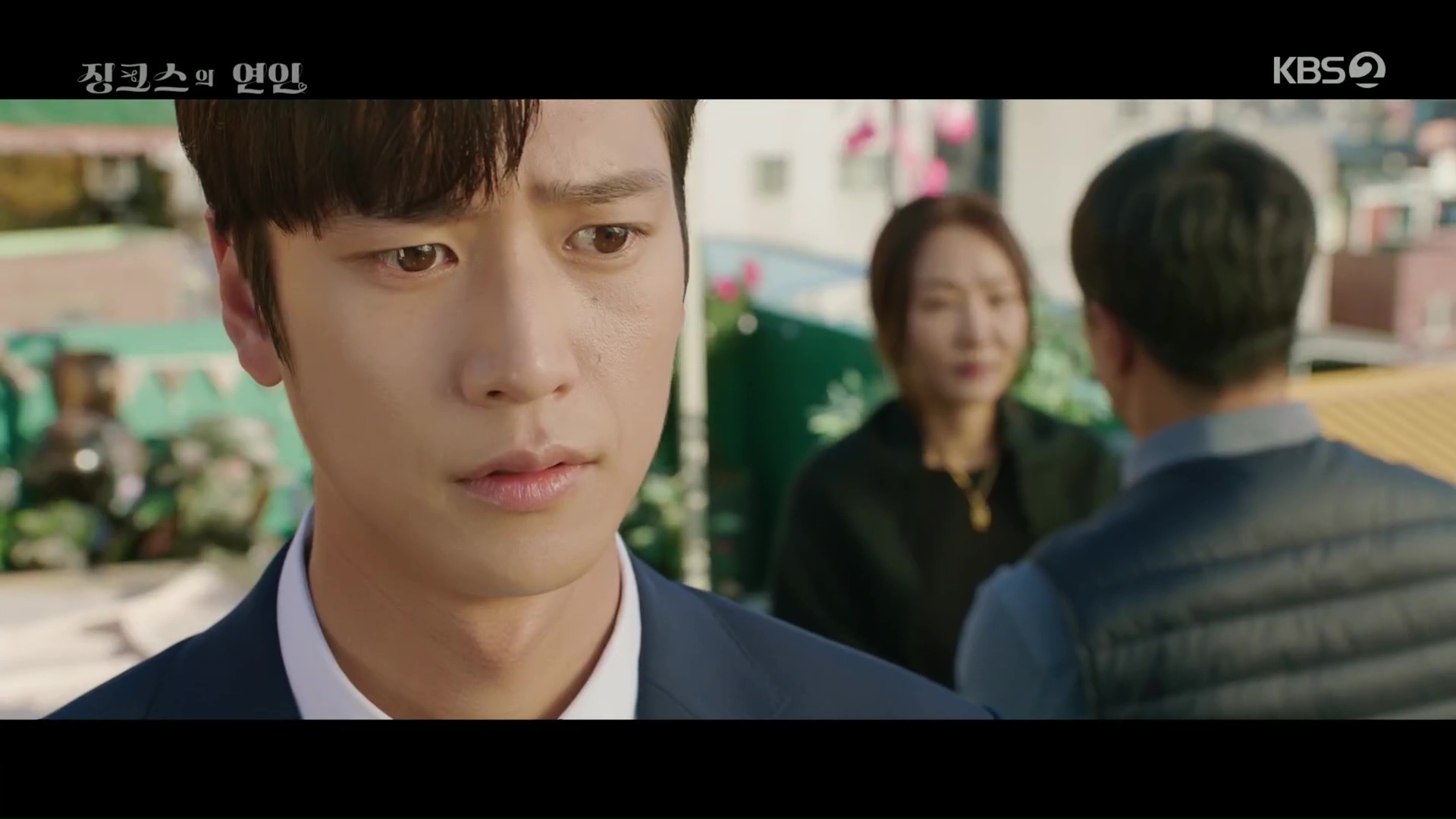 "Seul-bi suddenly turns dark and ominous, announcing that one of the former chairman’s descendants will take the curse for her."

I nominate Il-joong or his bratty son.

In the latter episodes father Il-joong (Cha Kwang-soo) and son Dong-sik (Choi Jung-woo) have become the comic relief. Both are hamming it up but the old man more so. The old kick in the shins was dragged out so I feel a little sorry for the old guy’s Secretary.

My (shallow) contribution for this week: Sukwang looks dapper all suited up.

i have given up trying to figure out the magic/lore of the series and just enjoying it for what it is....

I’m really enjoying the twists in the last couple episodes (even if I did see some of it coming lol). Feels like maybe something is finally happening in this show…

Also, anyone else notice the difference between Minjoon and Sugwang’s reactions to Seulbi acting all witchy? I just thought it was telling. I’m glad Sugwang is there for her and isn’t scared off by what she’s going through (and also apologized for the awful things he said).

Yes, finally we're getting somewhere. I also enjoyed the scene between MW and fiancee, I'm hoping that we see MW turn away from SB sooner rather than later. It's ridiculous that such an important piece of information is being kept from MW.

Noble idiocy is the golden thread in this drama.

"After all, if Min-joon knew the reason, we’d have to find some other source of conflict, wouldn’t we?"
LMAOOOOOO

Remember when this show had a lot more rom-com to it? I rather miss that.

I also would like to see some of the earlier, energetic and wild-spirited Seul Bi. She had to grow out of her naivete. That is absolutely true. But there was something really loveable and compelling about her demeanor that was different from her naivete. I hope she regains that energy.

So here we are, three quarters through, and the message of the drama is, "Sure we kept women chained up and drugged in a secret room so we could exploit them but that's actually what they wanted all along".
See! Women be scheming so that whole rape dungeon thing was fine.

(Yes, if the Chairman impregnated a woman he was holding hostage then it was rape.)

Seul-bi martyring herself on the back of a prophecy that her forebears initiated is the opposite of agency. Two whole episodes of her noble tortured face in close up was pretty obnoxious really.

Honestly, the thing that's most hilarious about this piece of nonsense is that nothing that happens actually matters. People do big, sweeping things for no reason and then when it turns out that it was for no reason - nobody cares.

For example, Il-joong was so outraged that Su-kwang touched the Oracle that he murdered his mother and put a hit out on him, forcing him to fake his death. And then when everyone involved found out he was still alive, they went "Oh, really?" shrugs "Whatever."
Which means I have no idea why they put the hit out on him in the first place. If it was Il-joong then what was his motive? Did that motive change? Why did he suddenly decide he wanted to employ Su-kwang instead?

It's also the same thing for poor Secretary Jung whose entire life was ruined because a woman he barely knew hypnotised him into believing he loved her. And finding this out, his reaction is, "Okay, whatever".

Basically, this show is a crazy dumpster fire and I want to see just how bad it can actually get.