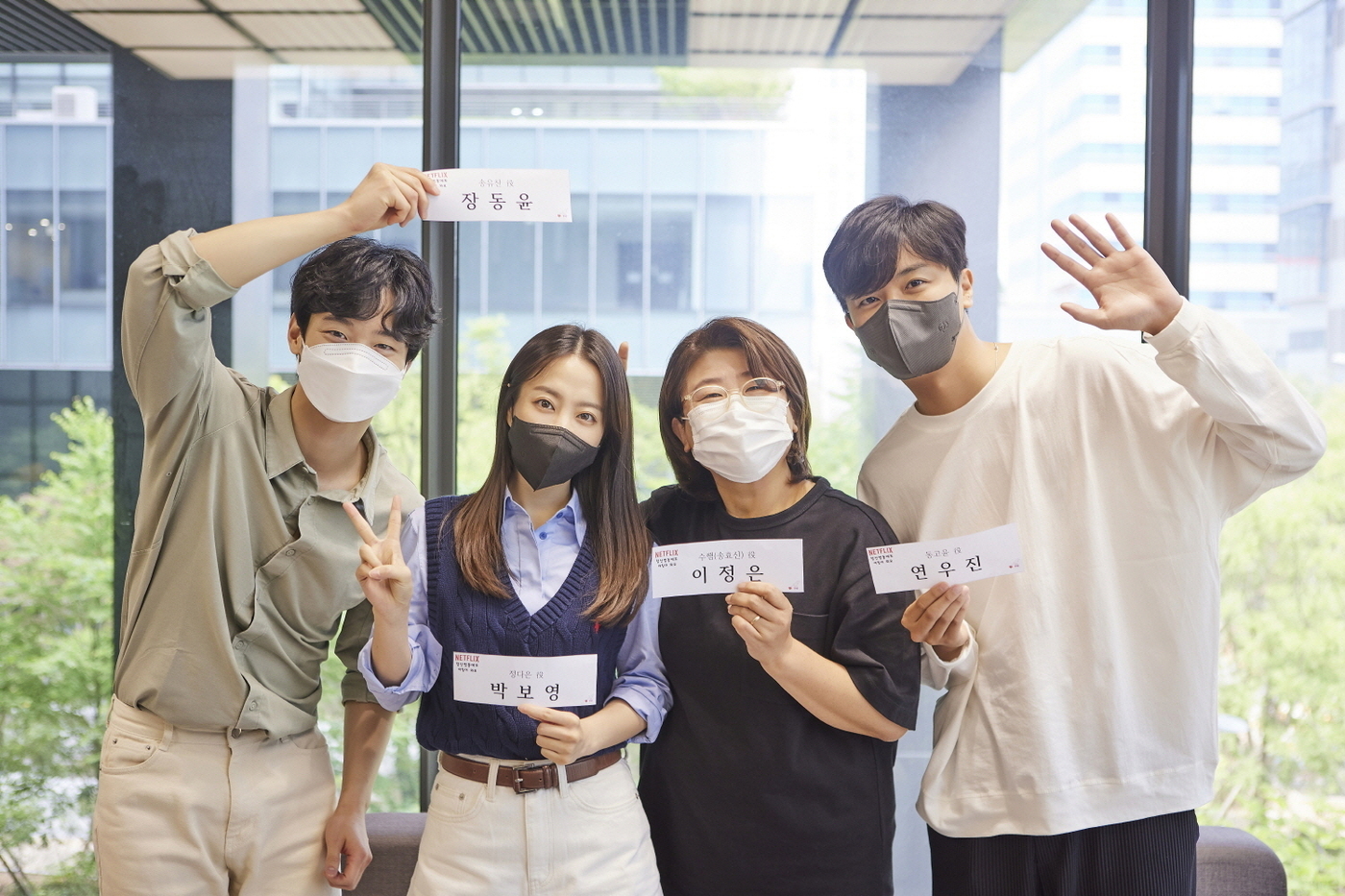 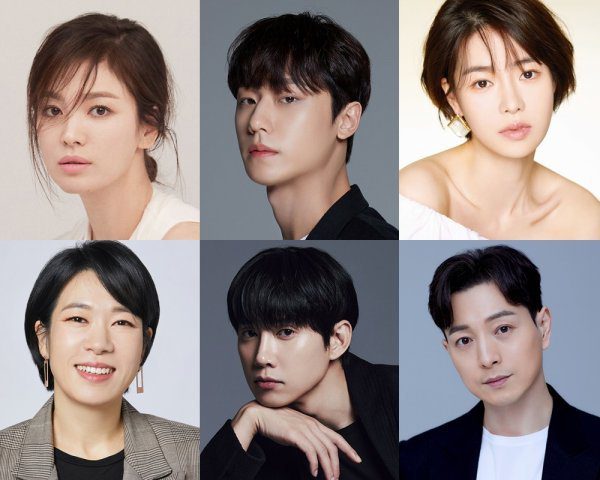 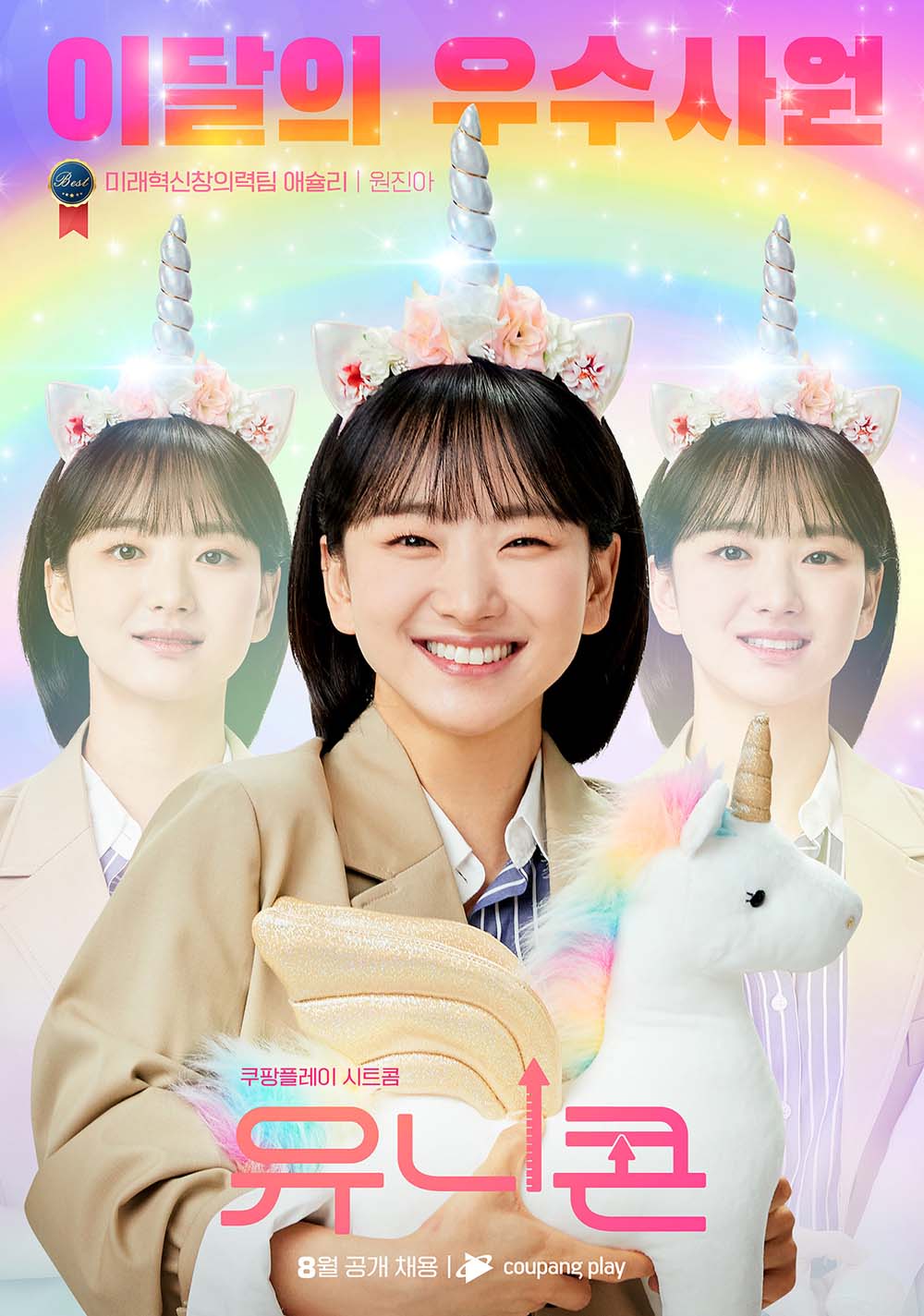 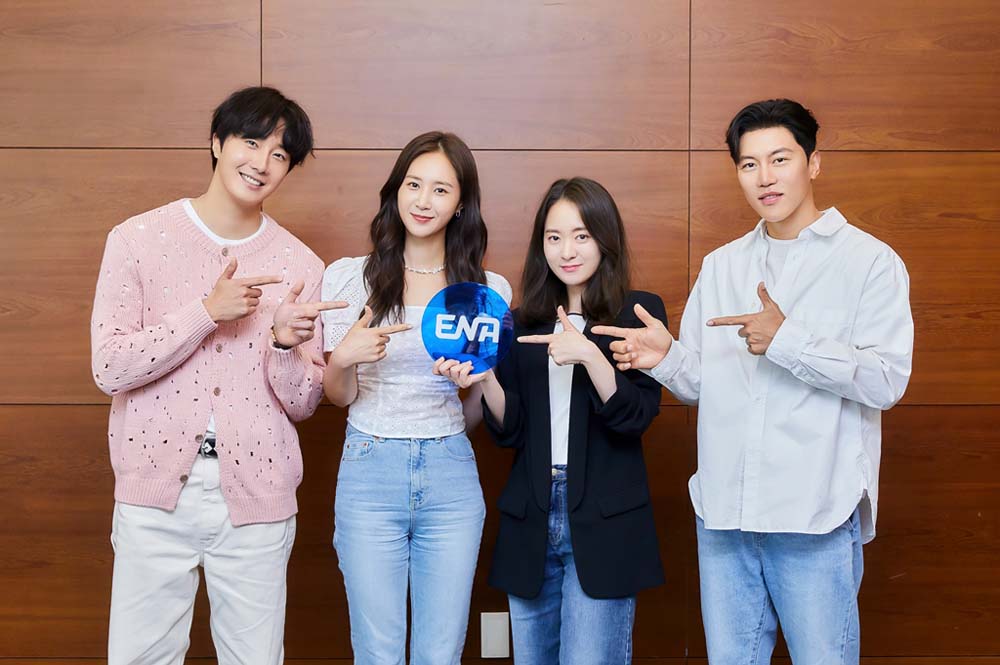 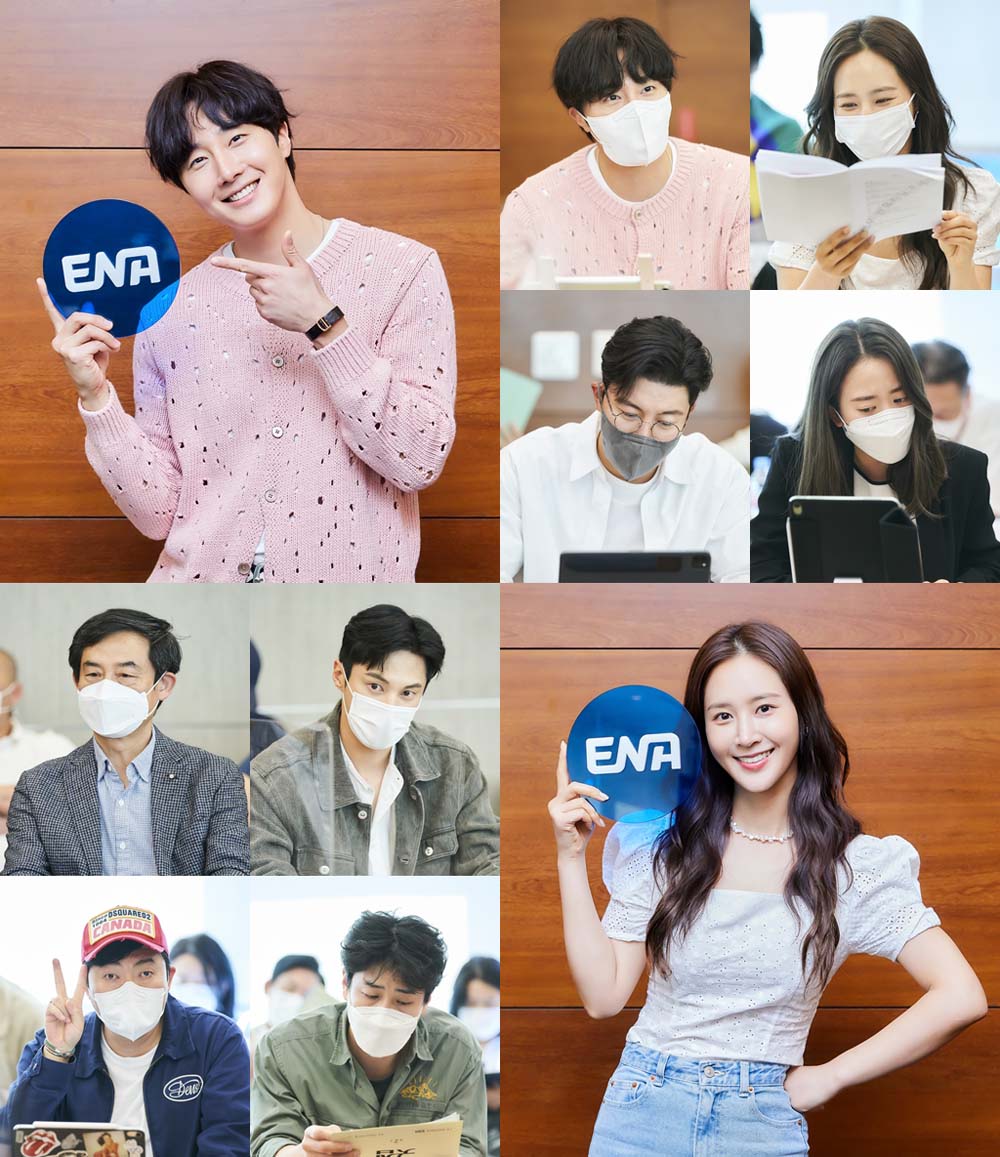 Jung Il-wooooooooo! May you finally find the success you deserve~

Excited to see Jung Il Woo and Yuri in another drama together!

Summed up the way I feel about The Glory perfectly!

I want to add Park Sung-hoon to the list of pros and the plot set-up to the cons, but otherwise, yes. That’s basically The Glory in a nutshell.

1. Now that’s some next level bad bitch casting. Not a single weak spot in that lineup.

3. …Is this the first Cha Tae-hyun drama in years to not be copaganda? If so, that’s a win for me.

4. I hope the cheap-looking poster design is intentional. Because it’s giving ‘11-year-old wattpad writer hastily photoshopping a cover for their RPF’ energy and Won Jin-ah simply deserves better. This is also not a reference any sane person should understand.

6. Kim Min-kyu and Go Bo-gyeol is not a matchup I had on my drama couples bingo card (assuming they are the romantic pair), but I can kinda see it. They’re both hot and talented so this is cool. Also yay for more Yeh Ji-won!

7. Jung Il-woo and Yuri back together on my screen… ENA just keeps getting W’s.

@ladynightshade: “copaganda”! I hadn’t heard this before! You continue to teach me things! This is why I internet-love you!

@dncingemma: I find it to be a useful term to describe the vast majority of police media. There’s definitely a culture of deification around them unlike with other professions. It’s time to recognize it for what it is - image-making and public relations.

After all, why question unethical cops when they’re obviously cool and badass? How are they cool? Well, all the shows I watched told me so.

You’ve taught me a lot over the last couple months as well! Proud to call you one of my internet-friends.

Sadly, I think Cha Tae-hyun's character is a cop....

Not again 😔. Why does he keep doing this to me?

@ladynightshade: Haha re your 4, I definitely didn’t get it!

@dncingemma: Good! You do not need to understand the depths of gen z fanfiction depravity. Keep your mind safe.

I have a soft spot for Yeon Woojin and after the disappointing (to say it mildly) Thirty-Nine, would love for this to be an interesting and rounded role. Fighting!

After the disaster of Thirty-Nine, I would honestly be okay with him in anything with real substance.

@ladynightshade: So so true. What a wasted opportunity that drama was. They should have just called it “Here comes SHJ. And then some more and even more”.
Btw, could you remind me how to do Italics here if you have time? Thank you!

@ladynightshade: This time I got it wrong! SYJ not SHJ! And thank you for the tip!

@dncingemma: They could’ve just called it “Here comes SYJ” and just left it at that. Literally every other person was irrelevant unless it served SYJ’s character.

Corrections from my deleted comment: I did NOT explain it well last time.

Thirty nine had so much potential I thought it would be a 1988, Hospital playlist, Dear my friends vibe of friendships conquering all but it was so not that.

How can you tell a dying person they need to be the happiest cancer patient ever are they supposed to box up their pain, disappointment, anger and frustration for everyone else’s benefit?!

When she was told the % of recovery I gasped as if it was real life. Talk about cold hard facts.

Jung Il-woo, Kwon Yuri, Lee Joon-hyuk. I'm definitely sitting in for this one.
A strong supporting arc for Lee Joon-hyuk, writer-pd, is another thing I'll ask for.

I am definitely there for the Jung Il-woo and Kwon Yuri (along with Lee Joon-hyuk 1972) reunion. I am hoping GOOD JOB will be available on a legal site in the US.
Seeing Jung Il-woo up there reminds me that the way he was dressed as Ba-woo in BOSSAM was a crime.

‘Seeing Jung Il-woo up there reminds me that the way he was dressed as Ba-woo in BOSSAM was a crime’.
This is my laugh out loud quote for the morning, it clearly hurt, a lot.🤣

@Reply 1988: There was even a more egregious ‘crime’ and that was his hair/wig/facial hair styling. So unfair to saddle an actor with such handicaps where he could have had a decent wig suiting his face/bone structure and be clean-shaven. He deserved so much better than he got and the fact that he shone in the role despite these - shall I say sabotages, maybe - is a testament to his skill and screen presence.

Is he one of your biases by any chance🥰 I just accept with period dramas they will go weird but you’re right certain actors like Bogum and Soohyun both got to stay gorgeous.

@reply1988: I love this KDrama expression of ‘one’s bias’ as it is never used in the non-KDrama world. I have just started watching Bossam and love his acting but am dismayed by the disservice they have done to him.

I know there are so many phrases that I had to look up when I started to follow Kdrama posts on Instagram! The worst unknowns for me are the shortening of the drama titles 25,21 I get but some I only get after a while like Crash Landing on you, CLOY after a while I get it but a lot I can’t work out at all.

@reply1988: I know what you mean! I instinctively got CLOY but so many others eluded me for a while like “IONTBO”. As I hadn’t watched it, I had to look it up.

It’s true, if its one you’ve seen it you are more likely to pick it up I guess. I had seen that one and it still took me a while to work it out🤣

When you say look it up does that mean there is a dictionary like the one for urban slang? I never thought to google the initials before🥺 all that stress for no reason…

@reply1988: Sadly know. I went hunting for clues starting with the main actors who were mentioned in full.

sadly no not “know”. Sorry!

Oh I see serious detective work needed. It would be much easier if dramas are mentioned to mention a key word: Descendants or Crash landing then you could Google k drama Descendants and see what comes up! There’s short hand then there’s cryptic clues🤣🤣 They need to give newbies a chance to come in on the inside jokes…

@dncingemma, if you are just starting BOSSAM you may have got (imo) JIW’s response to his Ba-woo coustuming with him exposing his bare chest during the fight scene. It was great. To me it was like he was saying, “Ok, dress me in this crap and I will still show you! Lol.
On the other hand, Shin Hyun-soo as Dae-yeob looked fantastic in hanbok or yangban clothing. Whoever was responsible for his costuming should have received a special award.
Thanks for the memories.

Glad I got a laugh out you this morning!

1. The cast lineup is great, so I'll likely check it out for them. Whether or not I stick around depends on how the story is handled.

2. Song Hye Kyo in anything? No thank you. If not for her, I would have been really excited for this drama. I know it's a little mean, but I'm hoping she might be replaced or something 😩. Either that or I'm going to have to hear Beanies raving about the show (with her in it) to consider giving it a watch.

3. Sounds okay. Might check it out when it airs.

Ngl, seeing Song Hye-kyo on there doesn't give me any confidence for the drama. Her last couple of projects have been total flops for me.

I like Yeon Woo-Jin and Park Bo-young, but I am not sure I like the premise. Ah well, we live to see.

Good news. Jung Il-woo’s upcoming 16 episode W/T drama GOOD JOB is now on Viki US’s “Coming Soon” list. Episode one is scheduled to air Aug. 24.
I am definitely looking forward to the Jung Il-woo/Kwon Yuri reunion (and romance we didn’t get in BOSSAM).

can't wait to see jang dongyoon again, even though his role seems second lead-ish. i'm just back from rewatching solomon's perjury and tale of nokdu back to back- i really miss him goshh