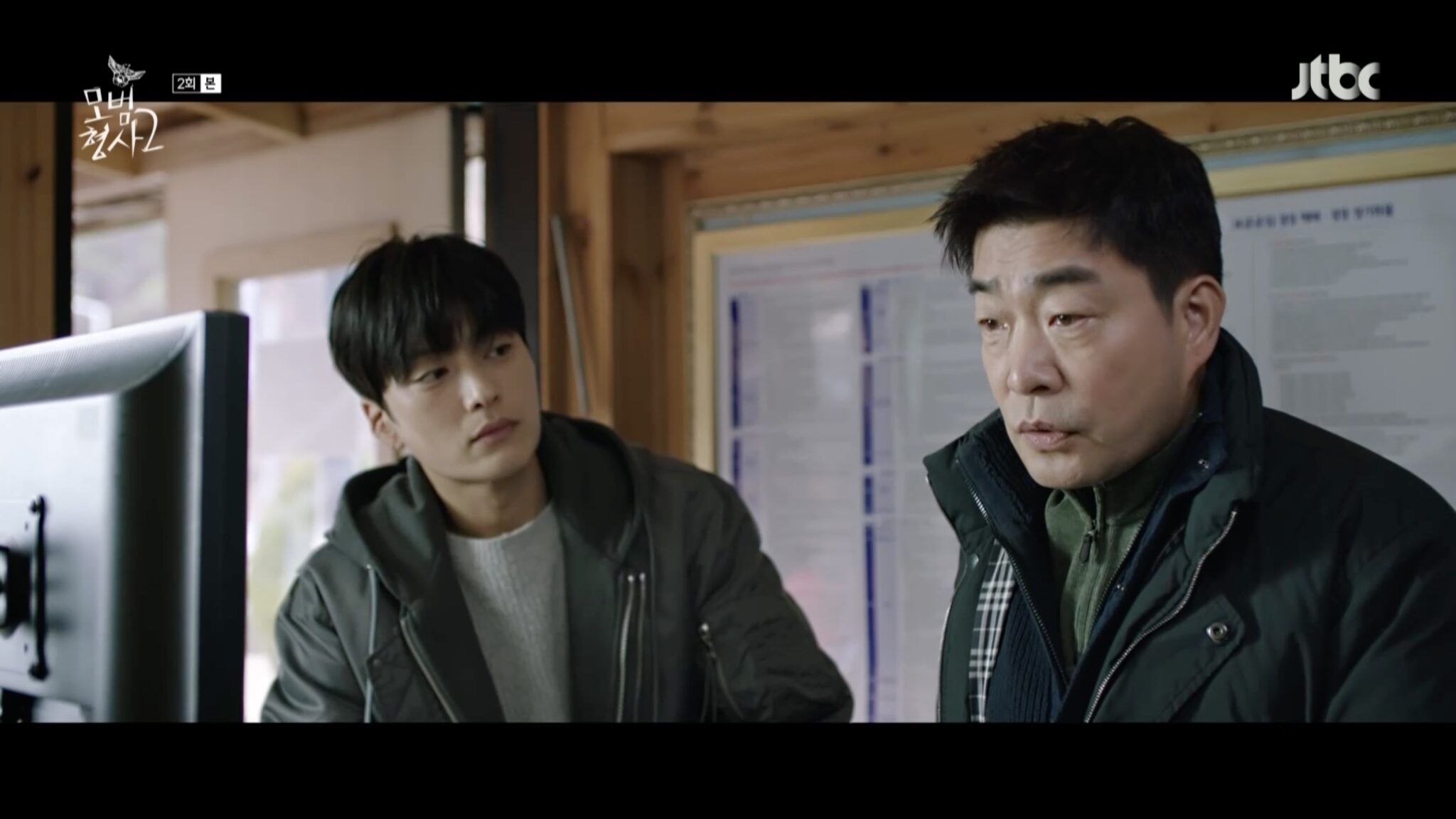 Realizing that the case isn’t as cut-and-dry as it initially seemed, our trusty detective duo begin investigating in earnest. They might face opposition from every corner, but it isn’t their first time going against the tide, and they’re determined to pursue the truth. 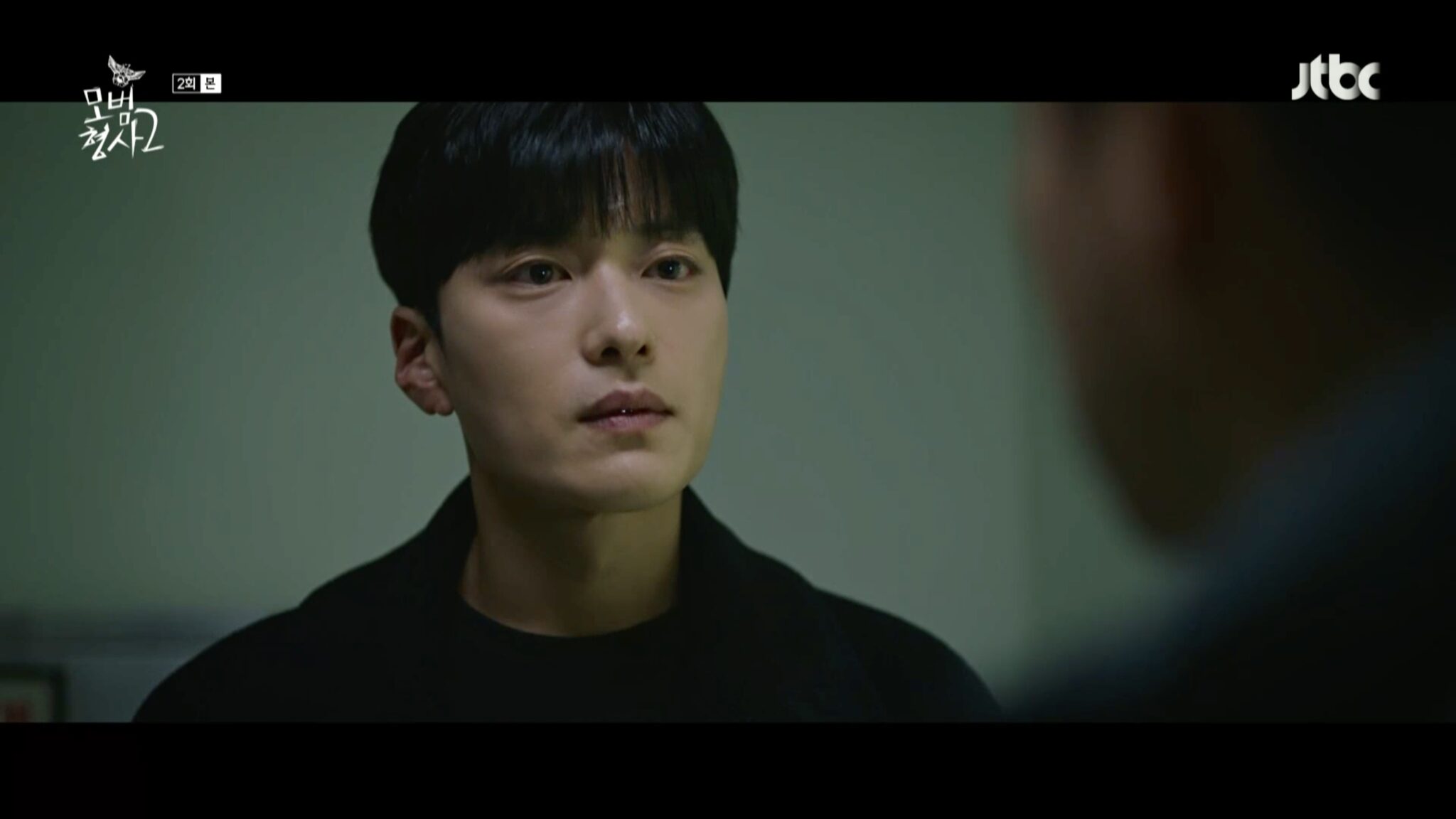 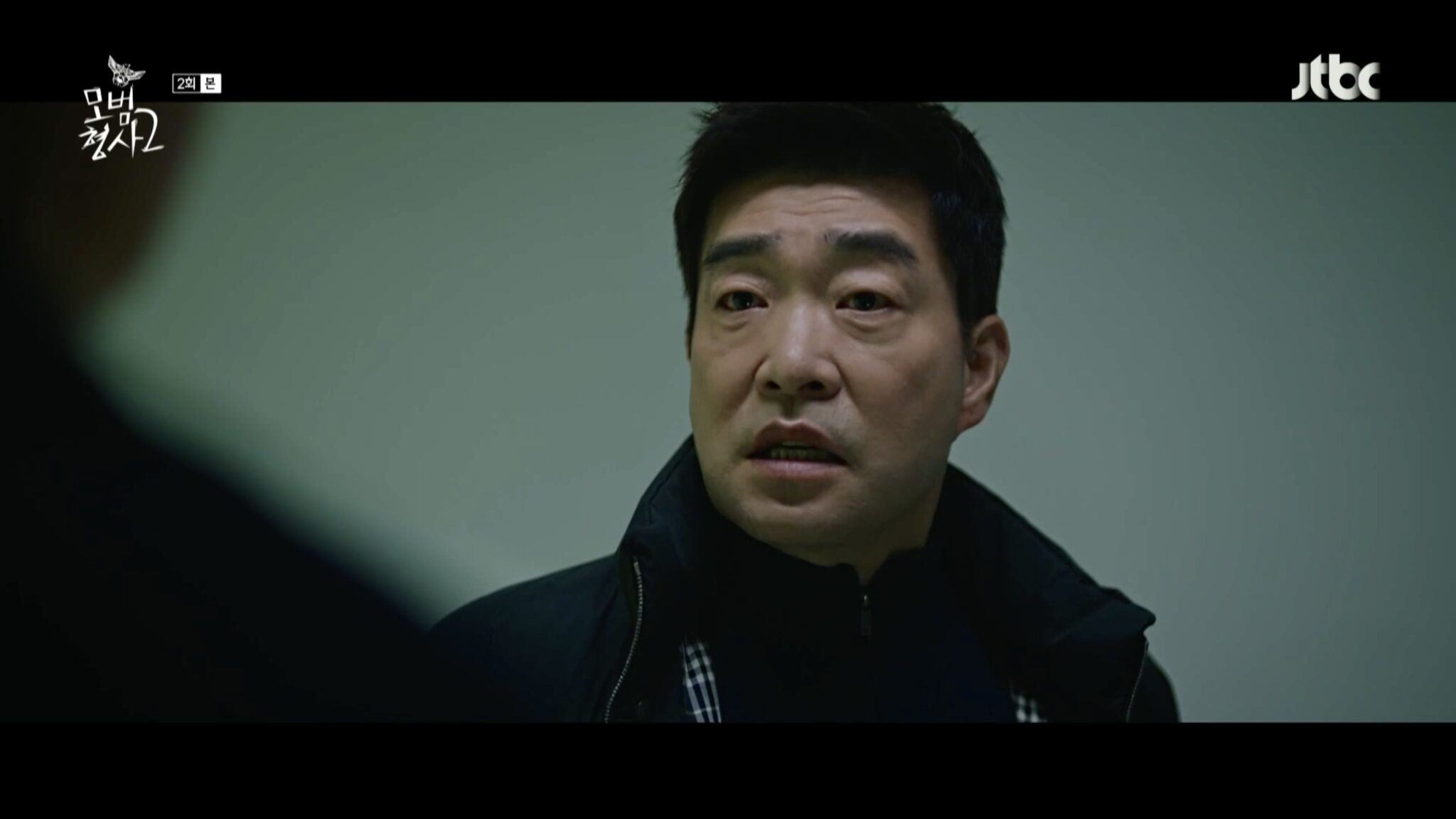 A bag of ginseng is found on the mountain; it’s the exact amount Hyung-bok had stolen, which Do-chang told him to return in exchange for being released from custody. It proves Hyung-bok was a mere thief, not a murderer, but that isn’t of much use now — Hyung-bok didn’t survive the accident.

Do-chang blames himself for being too hasty in apprehending Hyung-bok, and he can barely face Hyung-bok’s bereaved mother. However, Ji-hyuk reminds him that the guilt isn’t his to bear; he can’t take sole responsibility for the situation.

It might seem like Ji-hyuk is being unsympathetic, but he’s just looking out for Do-chang. The unfair depiction of Hyung-bok as a murderer doesn’t sit well with Ji-hyuk either, and before long, he’s rallying the team to launch a proper investigation into the serial murders. 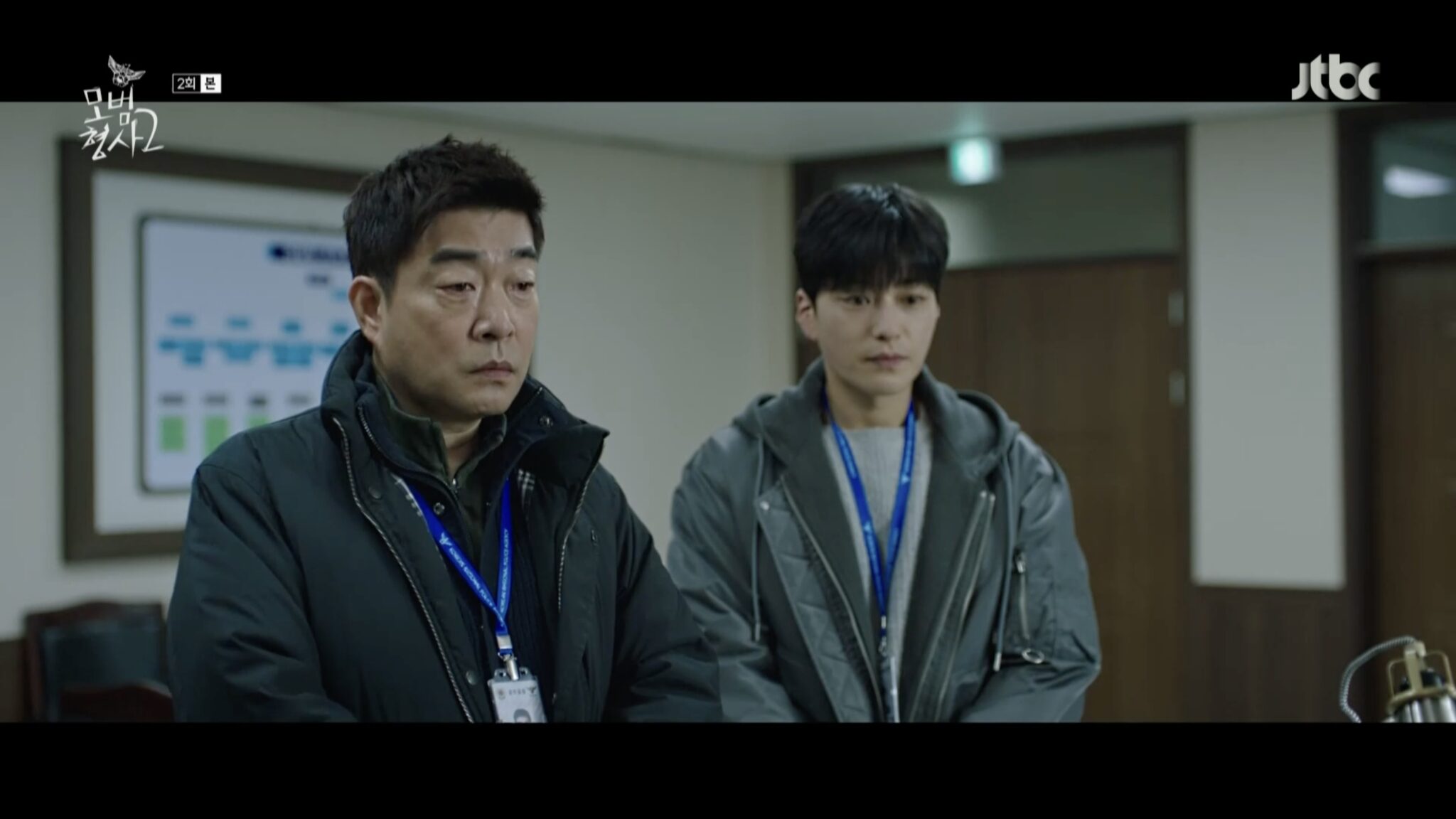 Of course, SUPERINTENDENT MOON (Sohn Jong-hak) isn’t enthusiastic about reopening a case that has already been closed cleanly. Their apprehension of the supposed murderer — never mind the fact that he died — brought their team much recognition and applause. How dare they suggest that they admit their mistake and drag their own name through the mud?

To counter the superintendent’s staunch refusal, Do-chang casually comments that Ji-hyuk is a loose cannon — if he’s not allowed to investigate, well, he might just start speaking to the media… LOL, the fear of bad press instantly gets Superintendent Moon to give in. 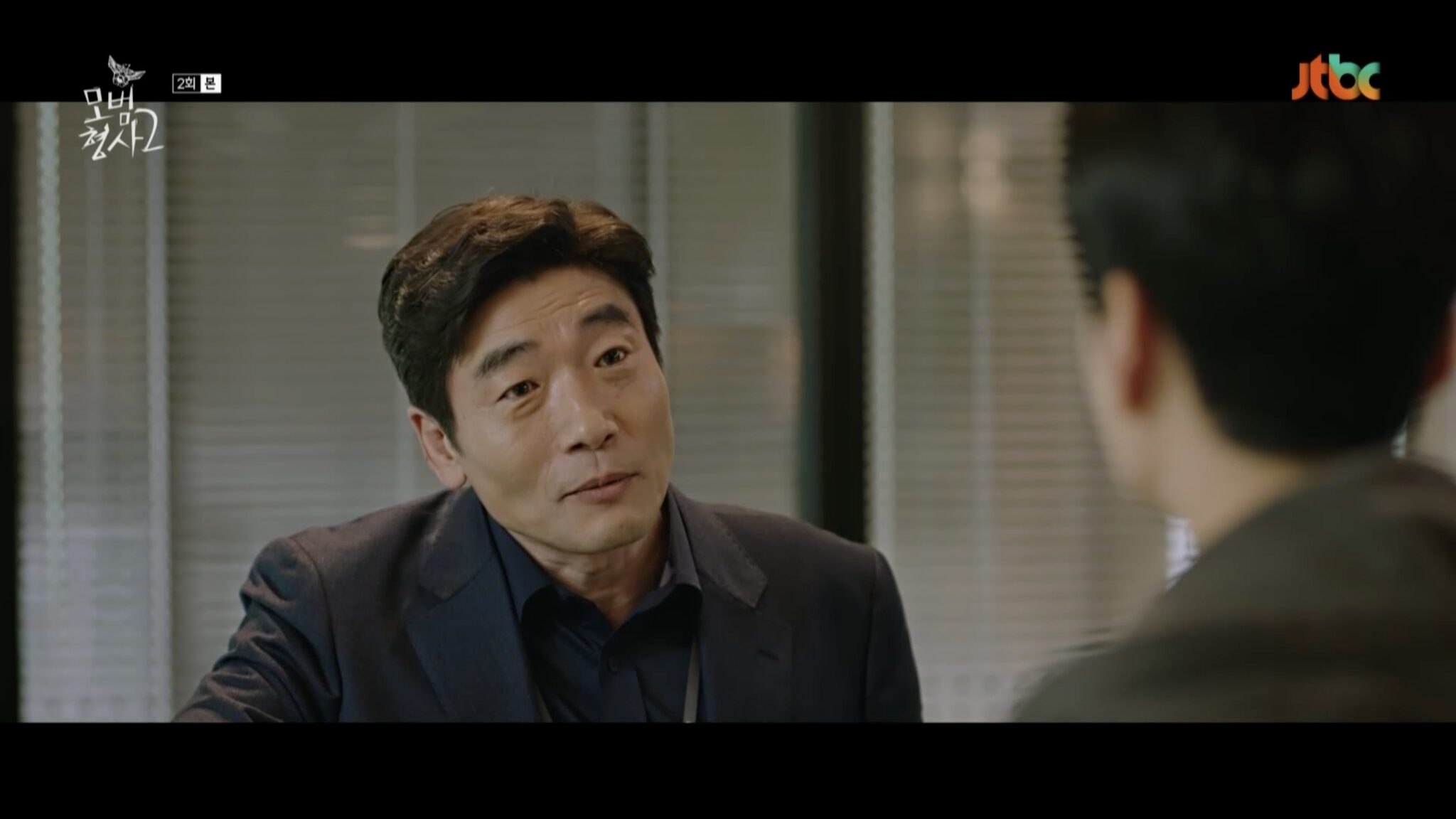 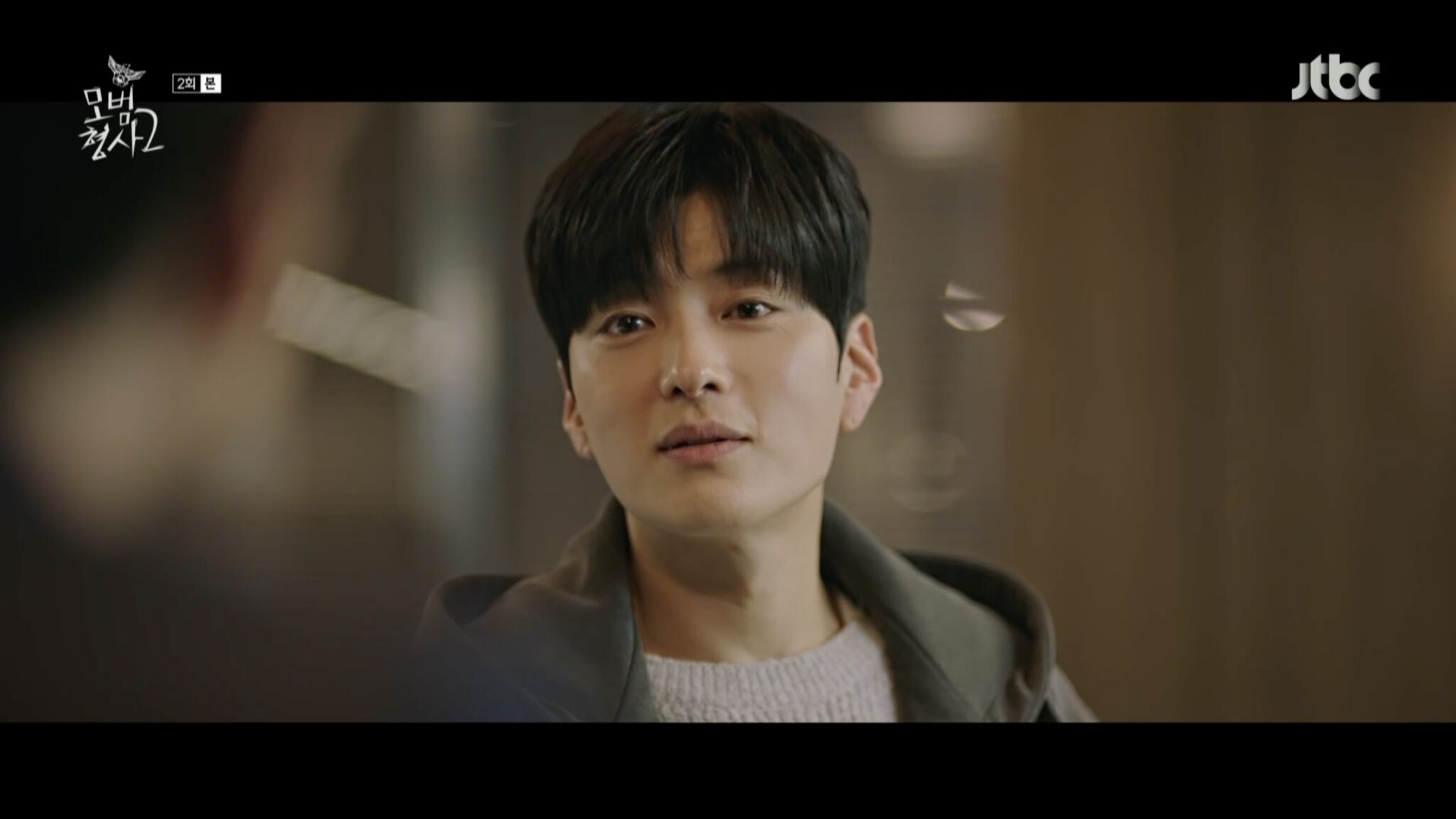 Ji-hyuk’s investigation leads him to TJ Group’s legal office, where serial murder victim JUNG HEE-JOO (Ha-young) worked at prior to her demise. He doesn’t glean much yet, but he does run into TJ legal chief CHOI YONG-GEUN (Park Won-sang).

Yong-geun was the detective who coerced Ji-hyuk into taking a leave of absence two years ago, making this an entirely unwelcome reunion. Even though Ji-hyuk keeps the details of his investigation vague, Yong-geun’s still unsettled by his sleuthing. 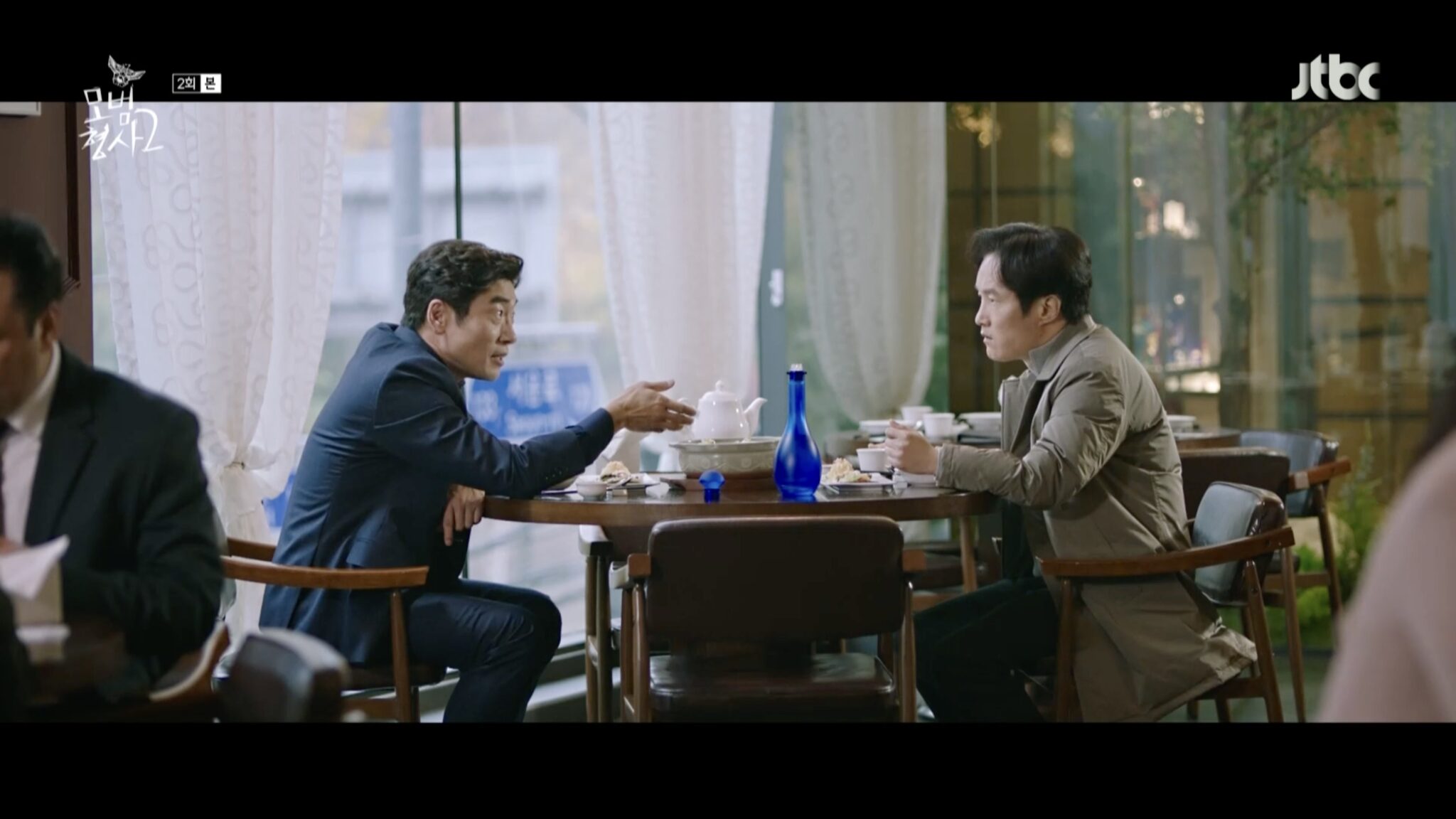 As such, Yong-geun meets up with Ki-jin to inform him about Ji-hyuk and Do-chang poking their noses into the serial murder case. He hints — quite heavy-handedly — that Ki-jin ought to tie up any loose ends as cleanly as possible.

With that, Ki-jin has his team burn every last file and delete every last byte of data from their computers. I mean, I already had zero faith in his integrity, but wow. How much do you want to bet he’s not going to take responsibility if things go south? 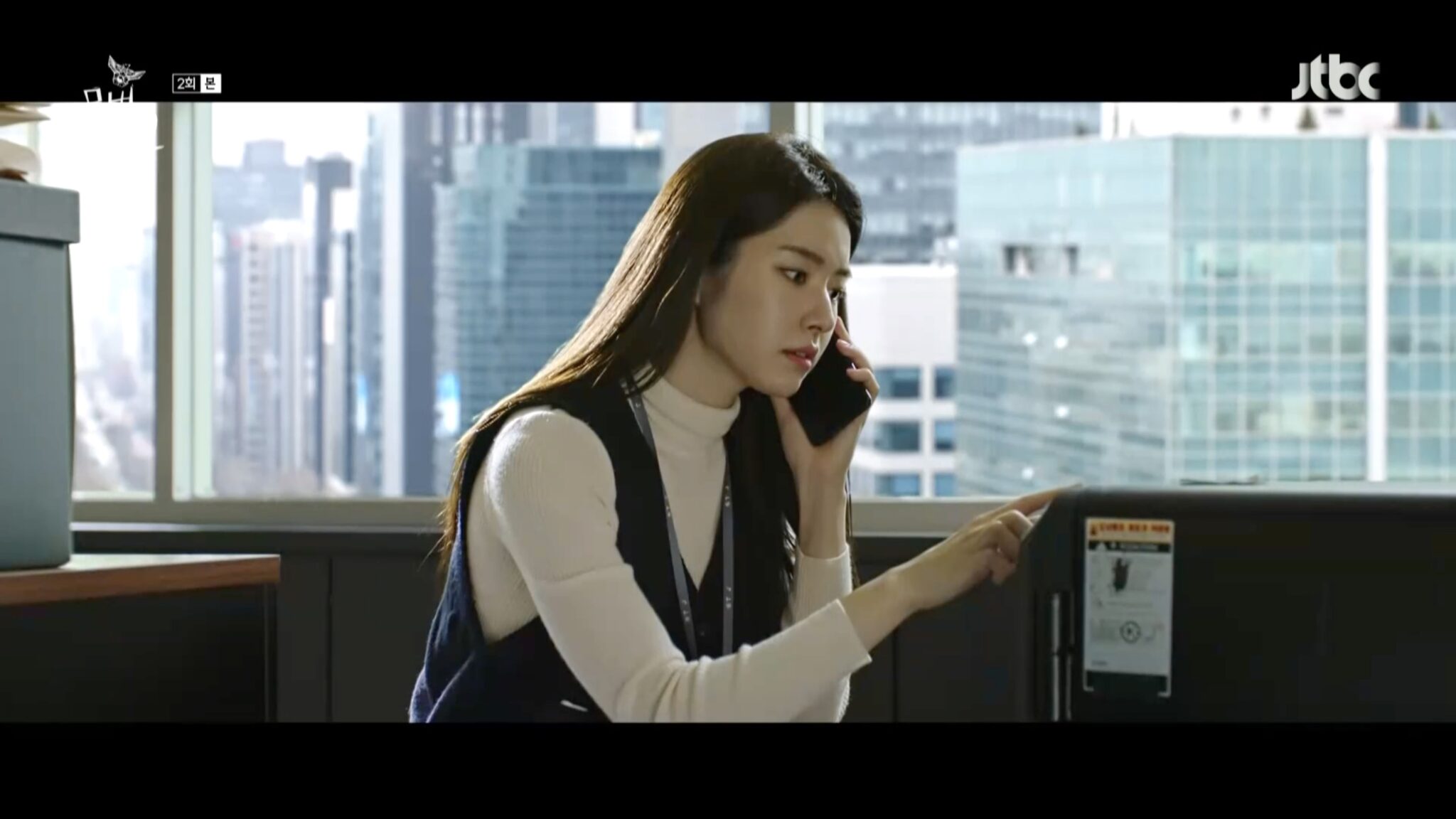 In any case, Yong-geun’s not the only one concerned about the ramifications of Hee-joo’s death; Tae-ho is too. In a flashback, we find out why — back during a search and seizure on the legal office, Tae-ho had ordered Hee-joo to retrieve a laptop from the safe in his office and destroy every last trace of it and the data within.

It isn’t revealed what the significance of the laptop is, or why the prosecution launched a search and seizure in the first place, but it’s clear Tae-ho doesn’t want anyone finding out about it. 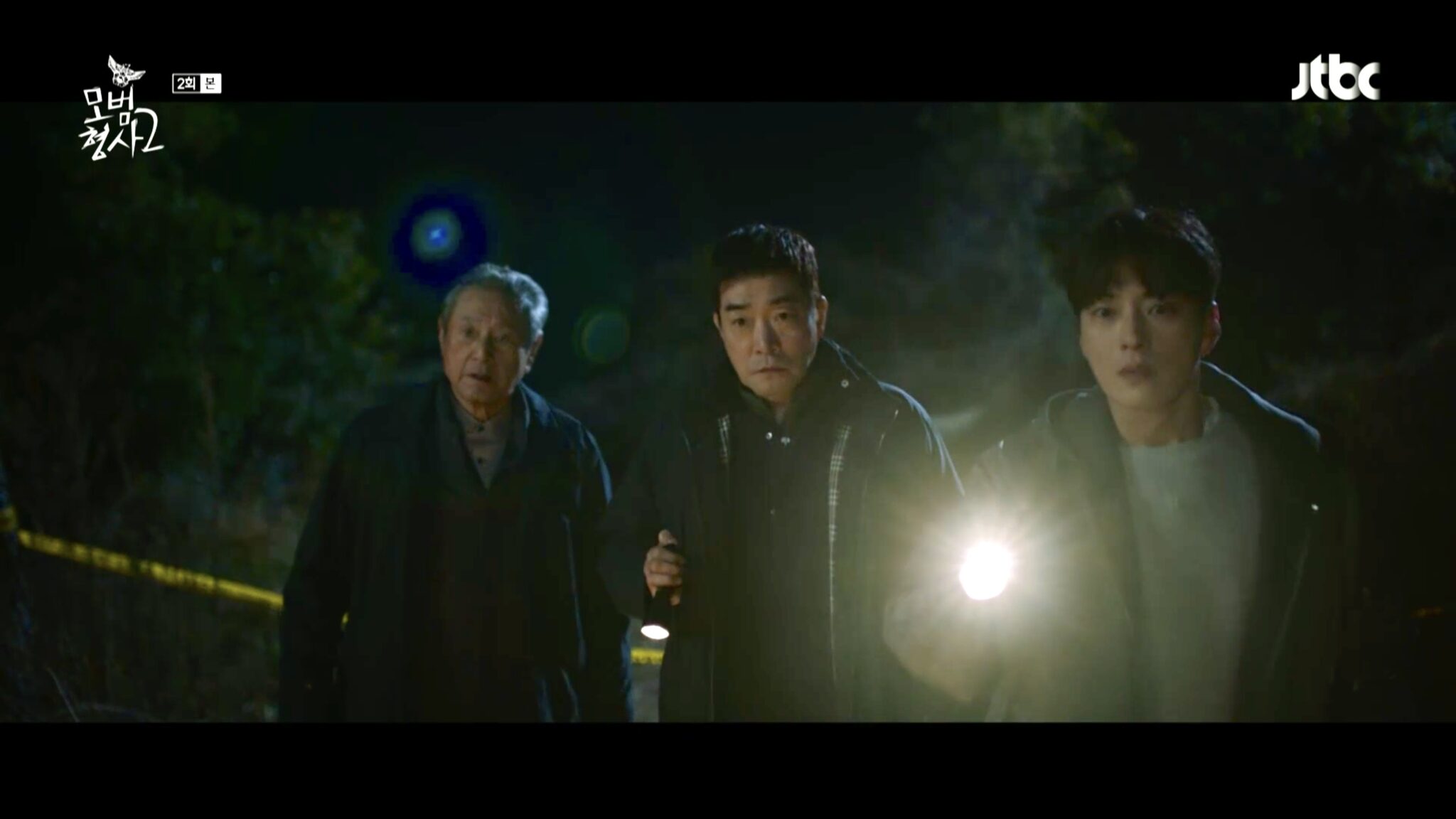 Meanwhile, Hee-joo’s grandfather is deep in mourning over her passing. Planning to follow her in death, he asks our detective pair where her body was found, claiming that he wants to pay the location a visit.

The trio head there together that night, but they’re not alone on the mountain — as they approach the cordoned-off crime scene, Ji-hyuk’s flashlight illuminates a freshly-dead woman in a white dress. Ack.

Ji-hyuk immediately takes off running, with Do-chang following close behind. They spot a figure making their escape through the foliage, but they end up losing him. 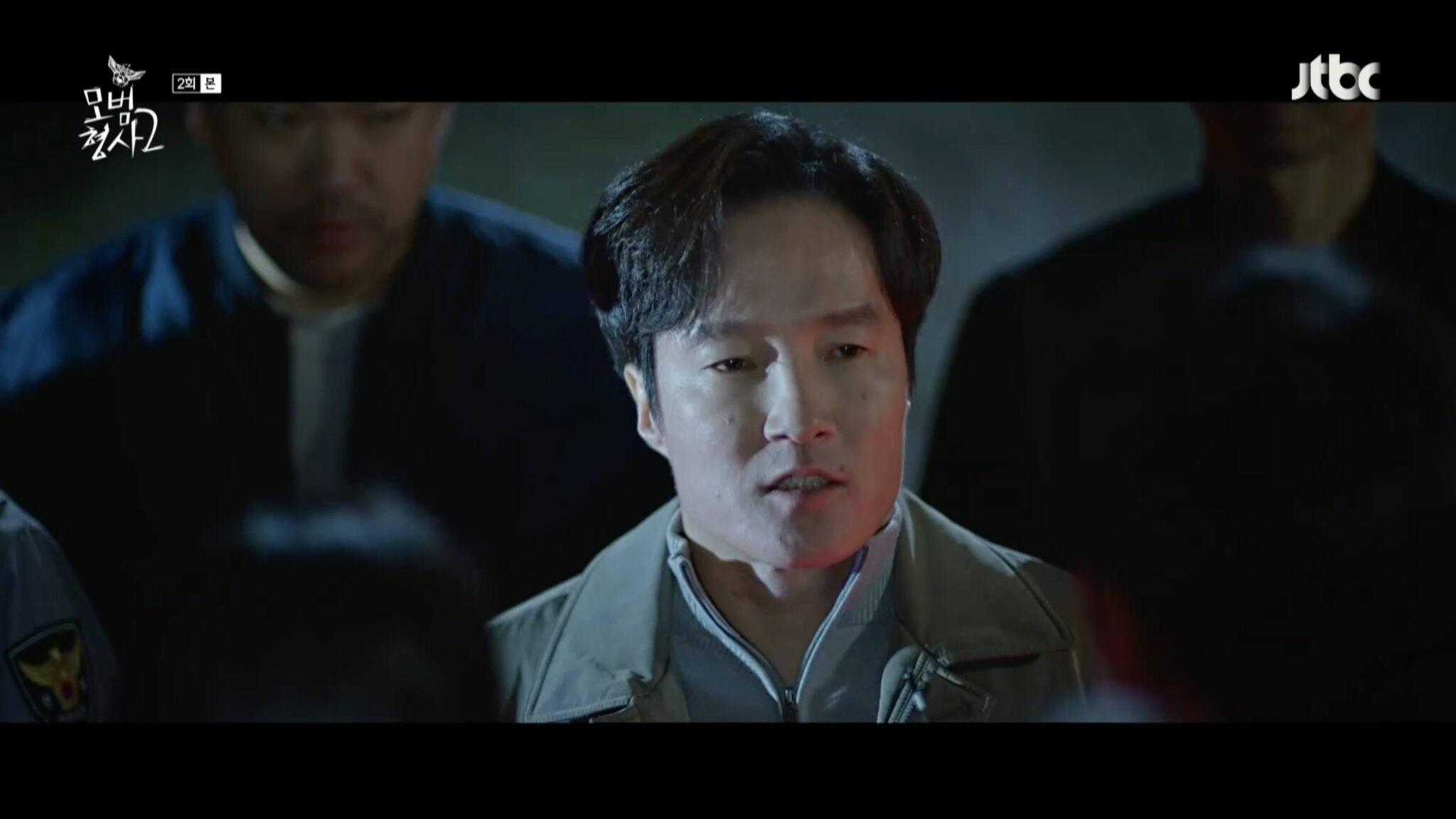 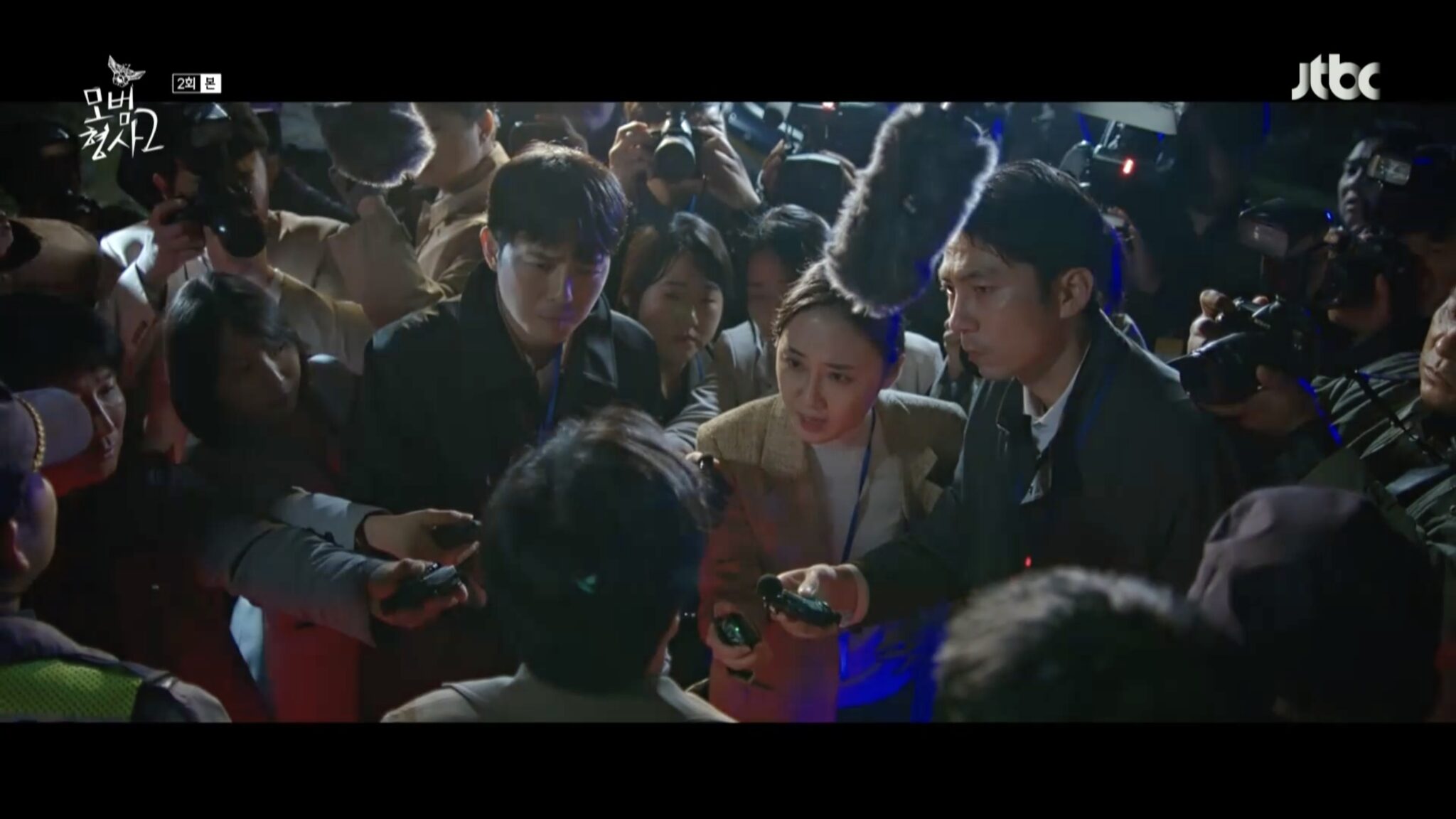 The discovery of a new victim seems to lend credence to Ji-hyuk and Do-chang’s belief that Hyung-bok wasn’t the true culprit, but stubborn Ki-jin has a different theory. He reassures the press that this was likely the work of a copycat killer, ugh.

Since Ki-jin insists on antagonizing our detective pair, they begin their own investigation. The team manages to find out the identity of the victim, as well as the path she took to get home, but unfortunately there are no CCTVs in her area. 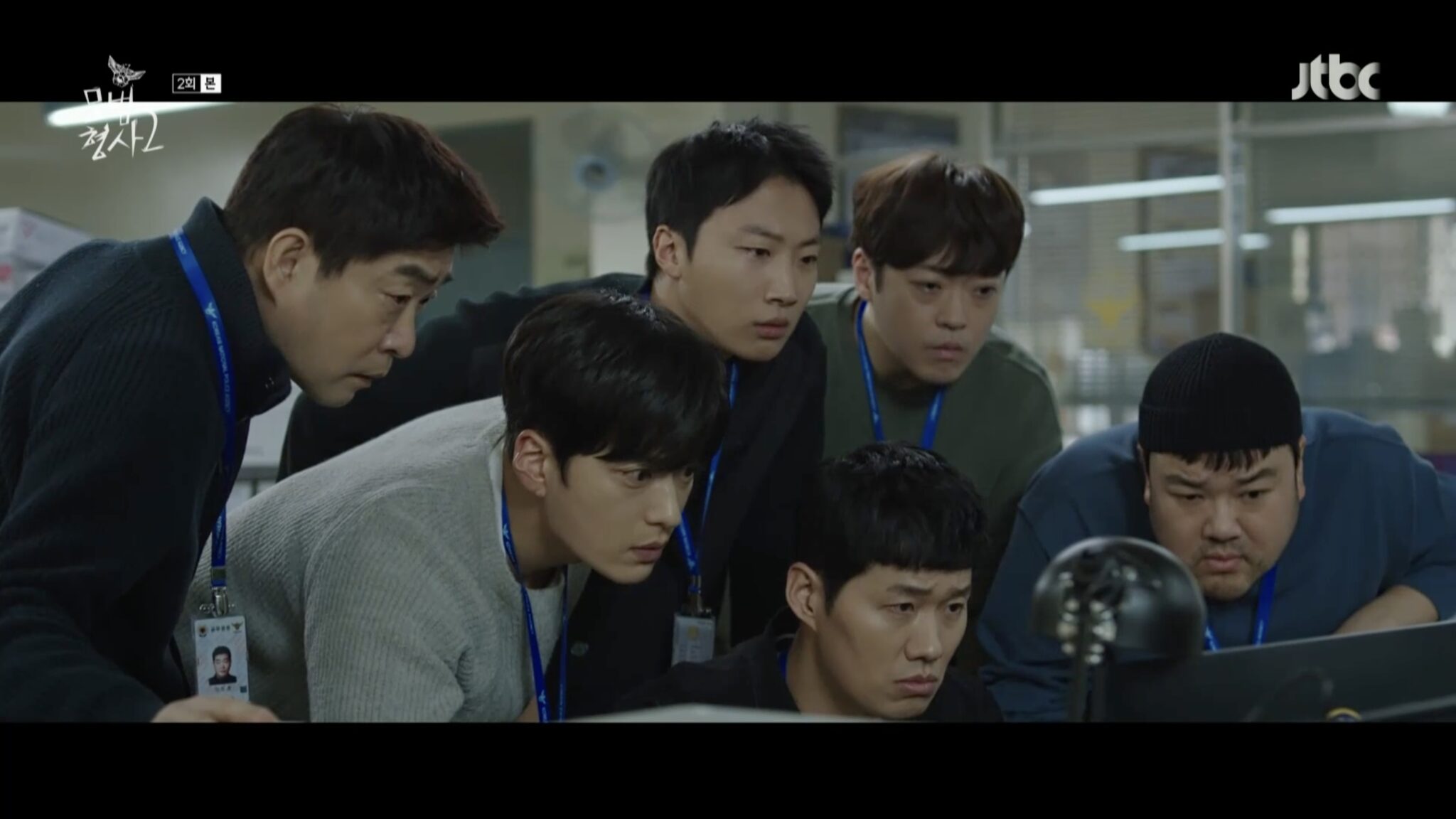 However, Ji-hyuk manages to take their investigation one step further. Having noticed the delivery boxes outside the victim’s house, Ji-hyuk obtains the delivery rider’s black box footage from the night of the incident.

In it, there’s a brief glimpse of someone carrying a large backpack. It’s not much to go on, but to Ji-hyuk, it’s a huge lead. That bag could very well be a bag full of murder weapons, carried by the culprit as he stalked his victim. 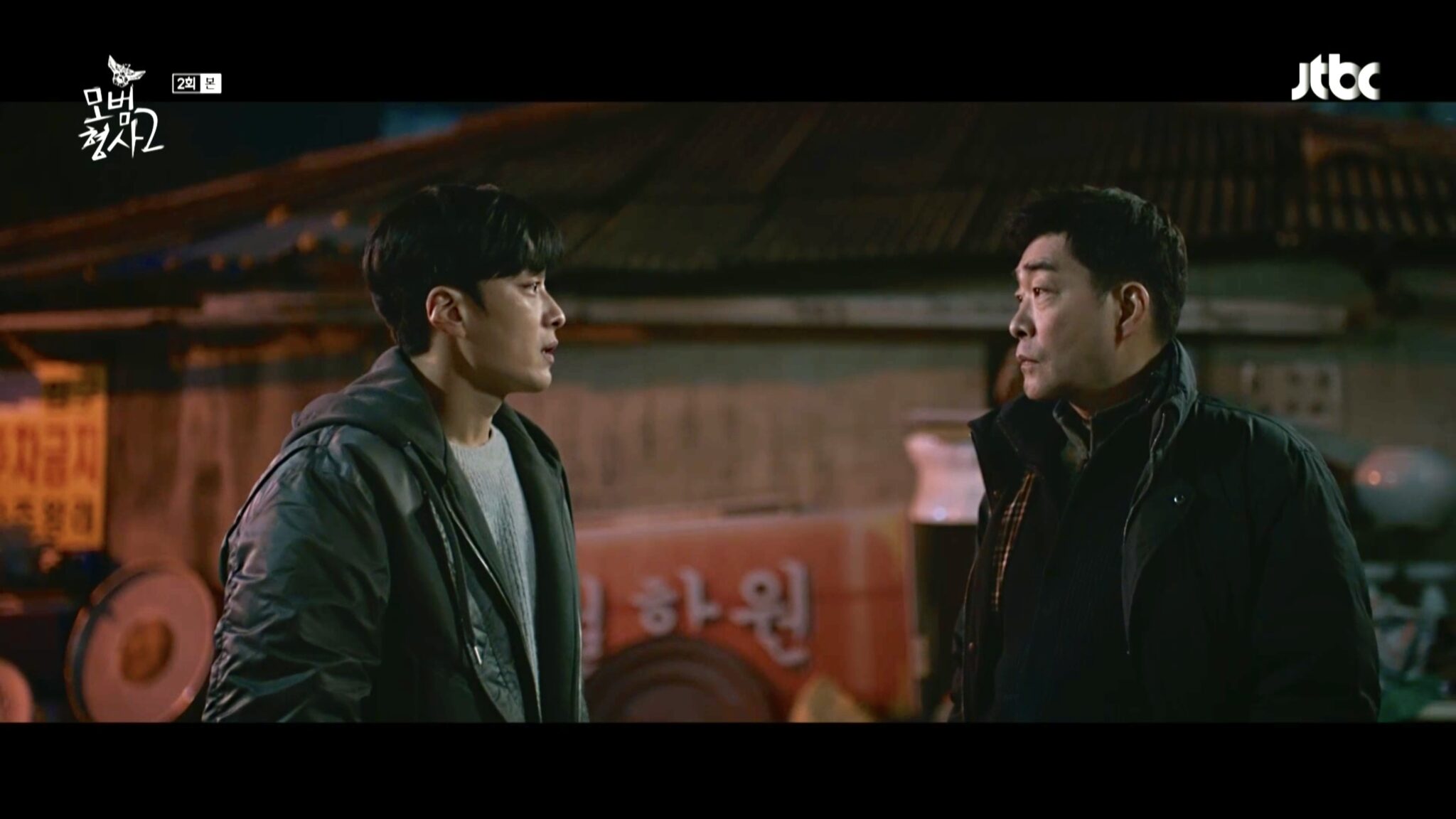 Shivers. There’s something extra chilling about a murderer who could have gotten away scot-free if he’d just stopped killing and let Hyung-bok take the blame, but who chose to continue his murder spree so that someone else wouldn’t take credit for his “work.” I don’t doubt the possibility that there could be multiple murderers, with this one being a copycat — it seems a little too soon for an identity reveal — but so far all clues seem to be pointing towards a single serial killer.

For Do-chang’s sake, at least, I hope that the new suspect they’re chasing after isn’t yet another red herring. Do-chang’s already struggling with so much weight on his conscience, and I can’t imagine what it’d do to his psyche if he ends up apprehending yet another wrongly-accused person. 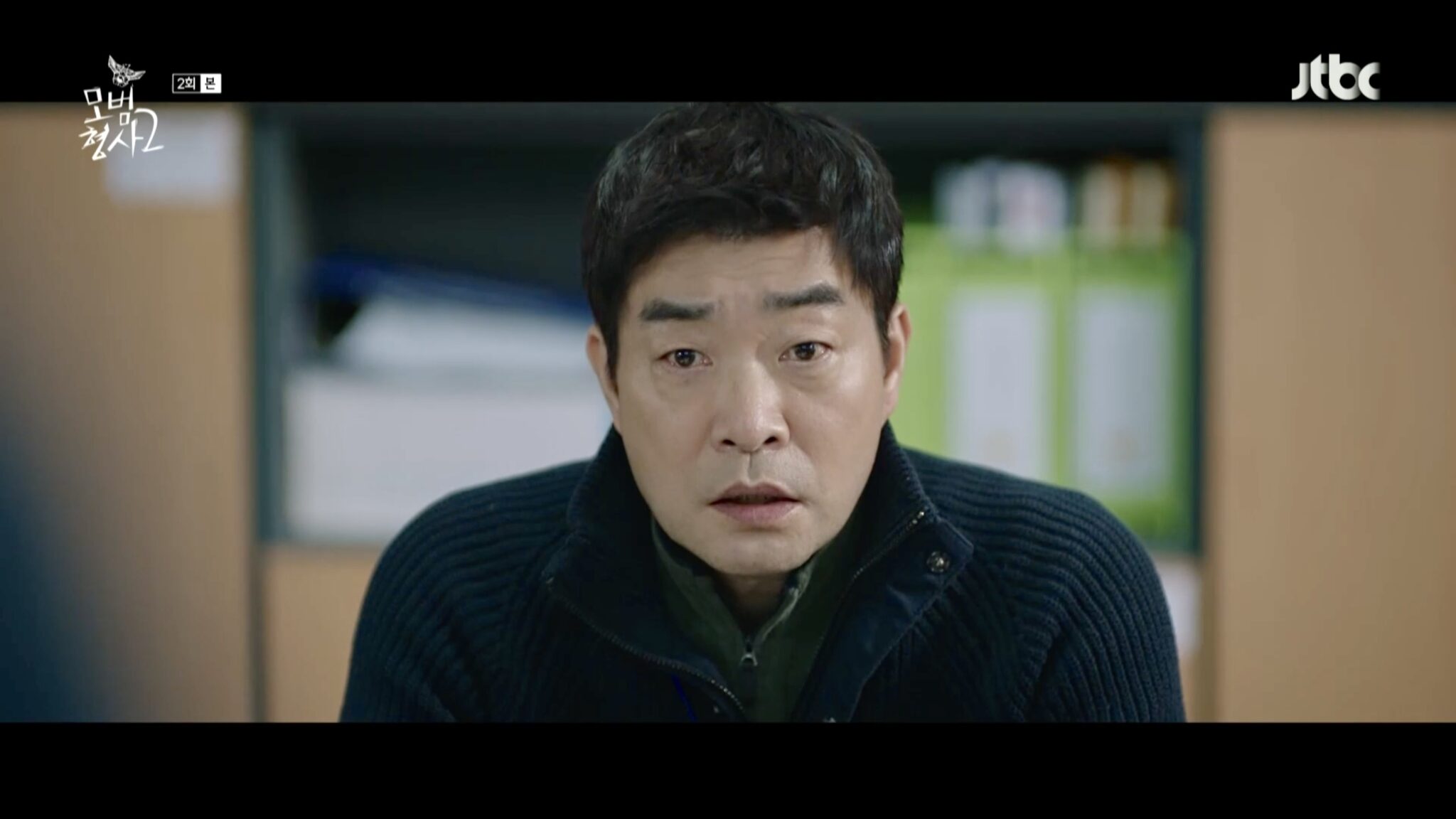 Even though the subs sporadically switched from English to what seemed to be Indonesian(?), I still enjoyed it. Jung Moon-sung's character reminds me of Ji Seung-hyun's from Season 1 - someone who does bad things but isn't necessarily evil.

I do hope recaps continue. It's nice to see the team back together and there's something very funny about the way Ji-hyuk and Do-chang manipulate their bosses.

Like a morally grey evil guy.
Funny thing is I don't trust his character not to cross the fine line. However it will be so cool to watch Jung Moon-sung struggle to be 'isn't necessarily evil' - the very last end of restraint.

I hope this show keeps getting wee-capped! I'm not watching myself because I'm yet to find a site that won't cause my laptop to melt down but I'm enjoying reading the summaries so far & it's helping my FOMO hahahaha

So it is a clash of the two police districts. I'm curious if the Seoul team hadn't been such Aholes, would they have shared more information. The other thing that bothered me was the fact that they didn't make sure the guy was actually the murderer. Who doesn't double check serial killers.

He was seen right at the crime scene. Their first instinct/intuition will be to suspect him before they even think of double-checking.
And if there's anything I've learnt from kdrama police procedurals, they tend to focus more on getting a name, then proceeding with the evidence so as to get the steam of the public and superiors off their backs. It's sad though. A not-guilty man died.

I found Tae ho chilling in episode one, but found him downright terrifying in this episode. And it is only going to get worse after his wife dropped that news to him so casually and then blew him off. It is almost like he will be a man on a mission of destruction, no matter who is in the way.

All that stuff happening on the TJ side is so suggestive. I get the feeling that Jeon Sang-woo's assault on the girl in the white dress in ep1 is a red herring, and the real source of homicidal passion lies somewhere in Na-na and Tae-ho's relationship.

Na-na's manner was casual here, but she was anything but casual at the doctor's in ep1, so I don't think her health was her only reason for the abortion. Something must have happened to make her believe that her marriage isn't worth saving. The first - and v cliched - thing that comes to mind is that Tae-ho was having an affair with Jung Hee-joo, and JHJ was consequently murdered and the whole thing staged to look like it's one of the white dress cases.

Just from these couple episodes, it shows that theirs was a marriage of business. I don't even want to say convience becuase in those marriages, you would at least like each other in some way.

I don't think it was an affair. I think that is was just loyalty on Hee joo's part and something happened where that loyalty had to be tested and the result was her death. I think she was having an an affair, just not with Tae ho. He didn't have the look of love on his face when he was sitting at her desk. It almost looked, familial.