In the Soop: Friendcation: Episode 4 (Final) 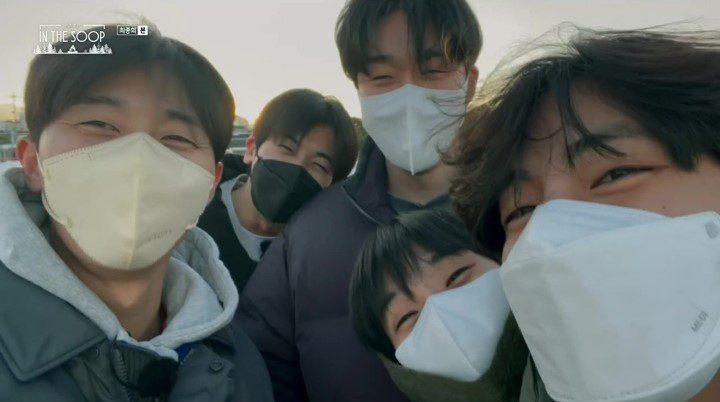 Our time with the beloved Wooga Squad comes to an end with plenty of laughs and shenanigans to round out this short but sweet friendship getaway. I didn’t think it could be possible to love these guys even more than I did before In the Soop, but what can I say – they’re talented in more ways than one, and I’m powerless against their individual and collective charms. 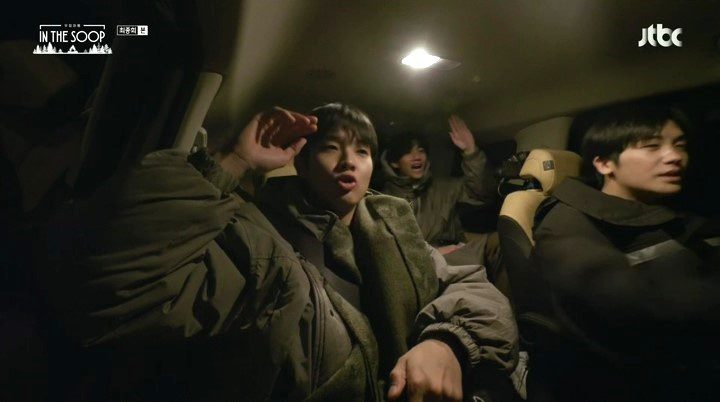 After wrapping up at the beach, the guys are off for their next activity: ice skating. As always, they make great use of their commute time, chatting about what their conversations might look like when they’re in their 50s and playing a “guess that song” game based on the first few seconds of the intro.

They arrive at the ice rink, and wow – they have a whole hockey rink all to themselves! One by one, they take the ice: Peakboy and Woo-shik are a little wobbly to start but get the hang of it after a few moments, while Seo-joon and Hyung-shik are pretty darn smooth from the start. Despite all of V’s previous bluster about his skills (it was his idea to go skating to begin with), it turns out he’s the weakest skater – but no matter, as that just gives the hyungs an excuse to rally around him. 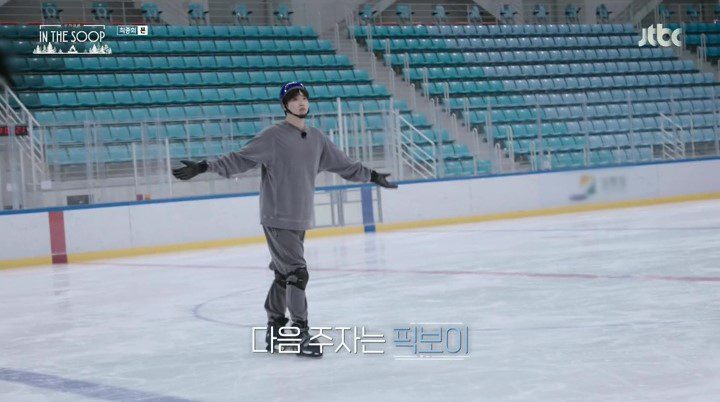 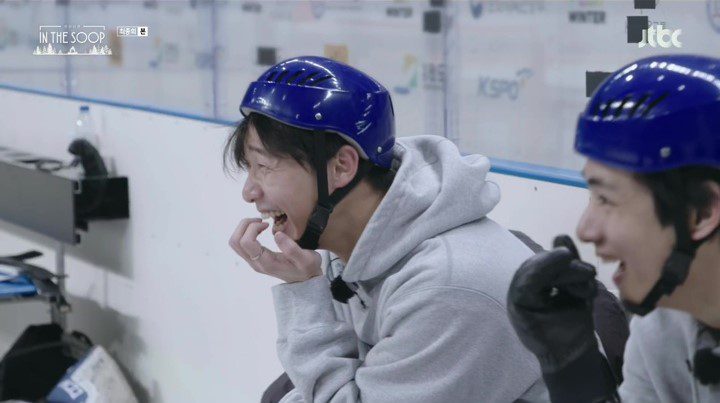 Because he knows what the audience wants, Woo-shik suggests that they each do a short ice routine in time with whatever song is playing over the speakers. Woo-shik provides an unforgettable performance to Swan Lake; V gives us an adorably shaky dance to his new favorite piece, Humoresque. Peakboy uses his long limbs to great comedic effect on Flight of the Bumblebee but quits halfway through. Wait, we don’t get a performance from Seo-joon or Hyung-shik? Boo.

After short and spirited game of tag, the guys head back to the house, where they get right to cooking dinner. It doesn’t matter that we’ve seen this scene – them cooking and eating together – multiple times throughout the series. They make the most mundane of tasks look like so much fun, whether it’s getting the ingredients ready or tasting the food along the way, that I’m fully invested in how their spicy chicken stew actually turns out (spoiler: it’s good!) 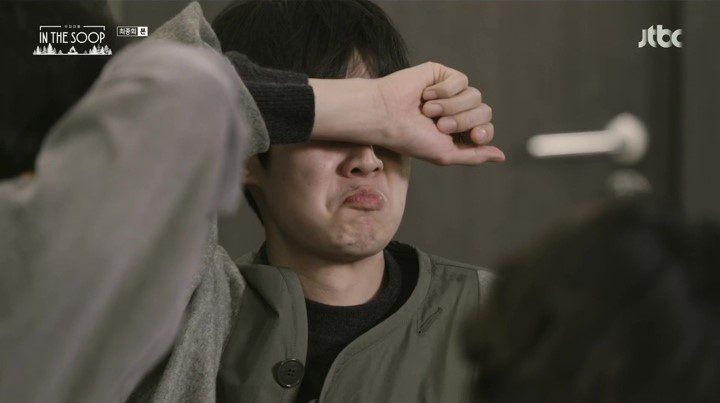 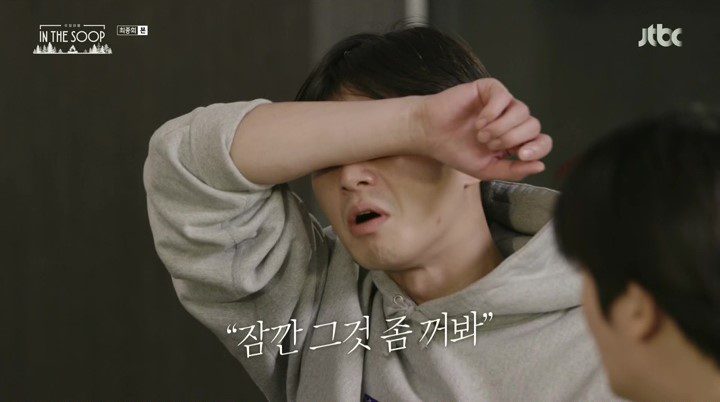 The meal winds down, and the guys lament the nearing end of their trip – Hyung-shik has to leave in the middle of the night for a shoot, while the rest of the crew will leave the next morning.

The group reminisces a bit about the past few days, and V says he doesn’t remember why he cried the night before. But not to worry – while V may not remember, his hyungs are there to reenact every single moment word for word, including mimicking V’s facial expressions and arm position. Ha!

Peakboy reminds the group that they need to give Hyung-shik a nickname before he leaves. They decide to go with “Baek-gu,” which means white Jindo dog, likening Hyung-shik to the friendly animal. And to really spice things up, they decide to write the name as the number “109,” which is “Baek-gu” when read aloud – only V messes up and uses letters instead, to the chagrin of the others. 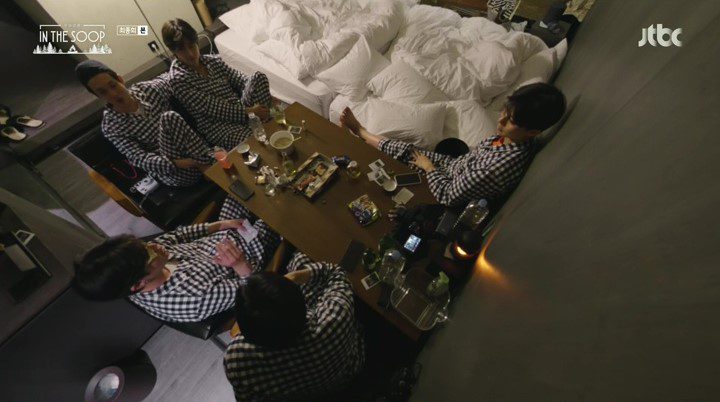 The group moves from the dinner table back to their room, where they keep the party going. As in real life, they pick up on threads of conversations they’ve had before, about work, their friendship, and how fun this friendcation has been (Woo-shik: “Are we filming season 2?”). It’s so sweet when V and Seo-joon swap stories about filming Hwarang together – V says Seo-joon was so helpful when he was struggling as a first-time actor, while Seo-joon says he found V’s determination and hard work to be endearing.

Despite their attempts to stretch out the night as long as possible, it’s finally time for bed. Seo-joon, Woo-shik, Peakboy and V reluctantly say goodbye to Hyung-shik as they fall asleep, and a little while later, Hyung-shik quietly heads out. 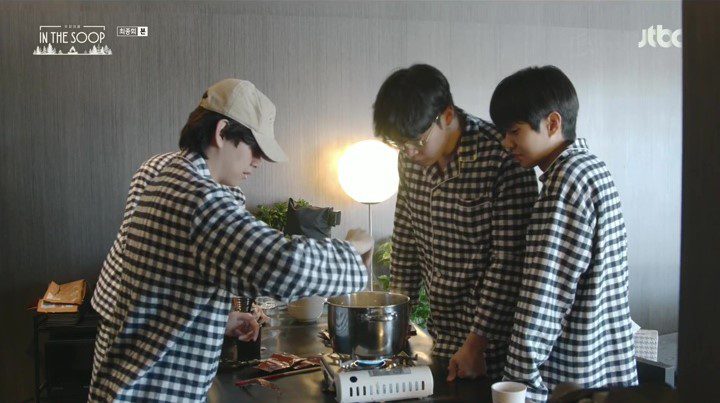 The next morning, V is in charge of breakfast while the rest of the group starts to pack up and get the house back in order. Despite his best attempts, he somehow messes up the ratio of water to seasoning for the hand torn noodle soup he’s making, resulting in an incredibly salty dish. The group’s reactions are hilarious but kind – we’re seeing V’s “maknae” status come out in full force this last episode, and it’s so cute.

After everyone finishes packing up, they load themselves into the car for the trip home, signaling the end of this lovely respite for our Wooga Squad. But before the final credits roll, we get some bonus footage of the group reuniting to record the theme song of the series, “Polaroid.”

I’m so glad they found time to get together after their vacation to continue the In the Soop tradition of creating a unique soundtrack for the season – it’s only fitting to end our time with them as a full group, clowning each other and enjoying their time together. 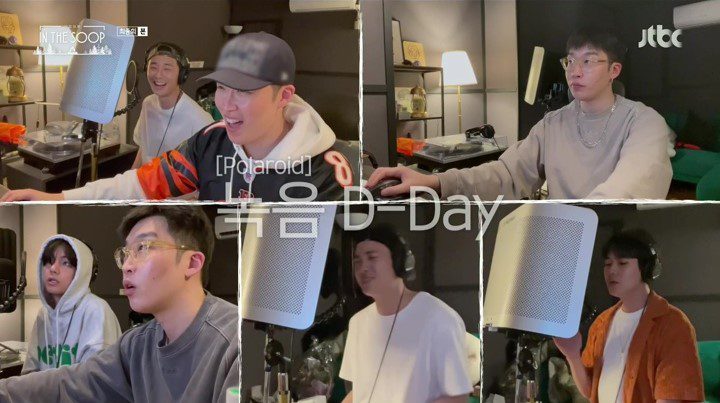 There’s not much else I can add about this experience that the guys don’t say themselves in their closing interviews, where they each reflect on what the trip has meant to them. I think Woo-shik summed it up perfectly when he shared the saying, “You’ve succeeded if you have a few good friends.” How lucky is he, that he has four?

One of my favorite tropes in dramas is that of the “found family,” so you can imagine just how much I adored watching the Wooga Squad, who literally embodies the concept in real life. (“Wooga” is short for “Are we family?” in Korean.) Even through the lens of a reality TV show, it’s hard to deny the closeness, joy, vulnerability, and honesty that each of them brings to this friendship, through big moments and small.

I know the group wondered what fans would think about their dynamic after watching the show, worrying that they could seem boring. But I’m here to assure them that it was anything but. I’m grateful for the way they’ve let us into their lives through this experience, and for the reminders they’ve given us about the importance of friendship, gratitude, and what it means to invest in relationships that matter. 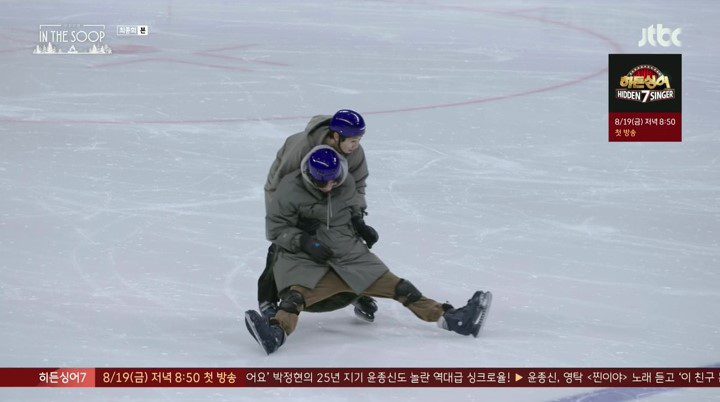 Thank you for your absolutely delightful recaps @chocolatte 💕 Your writing has really added to my enjoyment of this series because I can feel the love and affection that is behind every word and they perfectly encapsulate all the warmth and love I feel for this squad (and the themes of found family & friendship) too. The final few paragraphs in this recap especially were beautifully written and I agree wholeheartedly with all your sentiments!!

@chocolatte thank you for weecapping this series so well it’s the little things like explaining their squad name that added value for me. You have said the key things that I had written in my reflections on the series and wanted to convey in my review. I hope that those who watched it and were touched will spare the time to add comments and write a review too. I also hope that anyone who was unsure about watching will read these and chose to watch it for themselves so they can be enchanted, as we were, by our observations of these precious moments.

I am so glad that when this appeared on the weecapping list that I decided to watch it despite my lack of interest in reality tv. I loved it so much I have already written my review!

I felt for them talking about how just relaxing and enjoying each other’s company was what they all needed and wanted but may not be fun for the viewers to watch. I was thinking it was actually modelling that busyness is not needed to have fun, I loved it. Since I started watching clips on YouTube I have had suggestions pop up for other reality shows members of the Wooga squad are in. They consistently support each other doing guest appearances and supporting roles when one of them has an event or show and it highlights they are friends first and celebrities after.

If they go with their US coast to coast trip I am in, but to be honest, I am in whatever form their adventures take in the future. I am still not into reality tv shows, but I do like how these men roll😊.

I loved these 4 episodes. They were just too short <3 The wonderful way they depicted this friendship made my heart soft. I am lucky to have friends like these in life and we spend our time together exactly like that. Just hanging out together, eating and sharing what feels important. It was refreshing to see such a strong, healthy and soft male friendship. I do hope to see a second seanson <3

Thank you so much for recapping this @chocolatte. The show was a breath of fresh air. Like all seasons of ITS, I felt like I was the one being healed right alongside the cast. Hope we get more variety recaps once in a while because there's something irresistibly sweet about healing k-variety shows.

I LOVED this series SO much!!

I love the concept of it and sapped up every single minute. I mentioned it before how I loved the chill vibe and the fact that its not a scripted show where there's constant shenanigans but just the 5 of them being normal people for abit.

The fact that as celebs, they barely have any time to themselves or to hang out with each other hence to have something like this means alot to me, that they can sit back and breathe