A group of people from different walks of life come together hoping to make their millions in the stock market. They plan to learn from a stock guru who promises to teach them his secrets.

A group of people from different walks of life come together hoping to make their millions in the stock market. They plan to learn from a stock guru who promises to teach them his secrets. 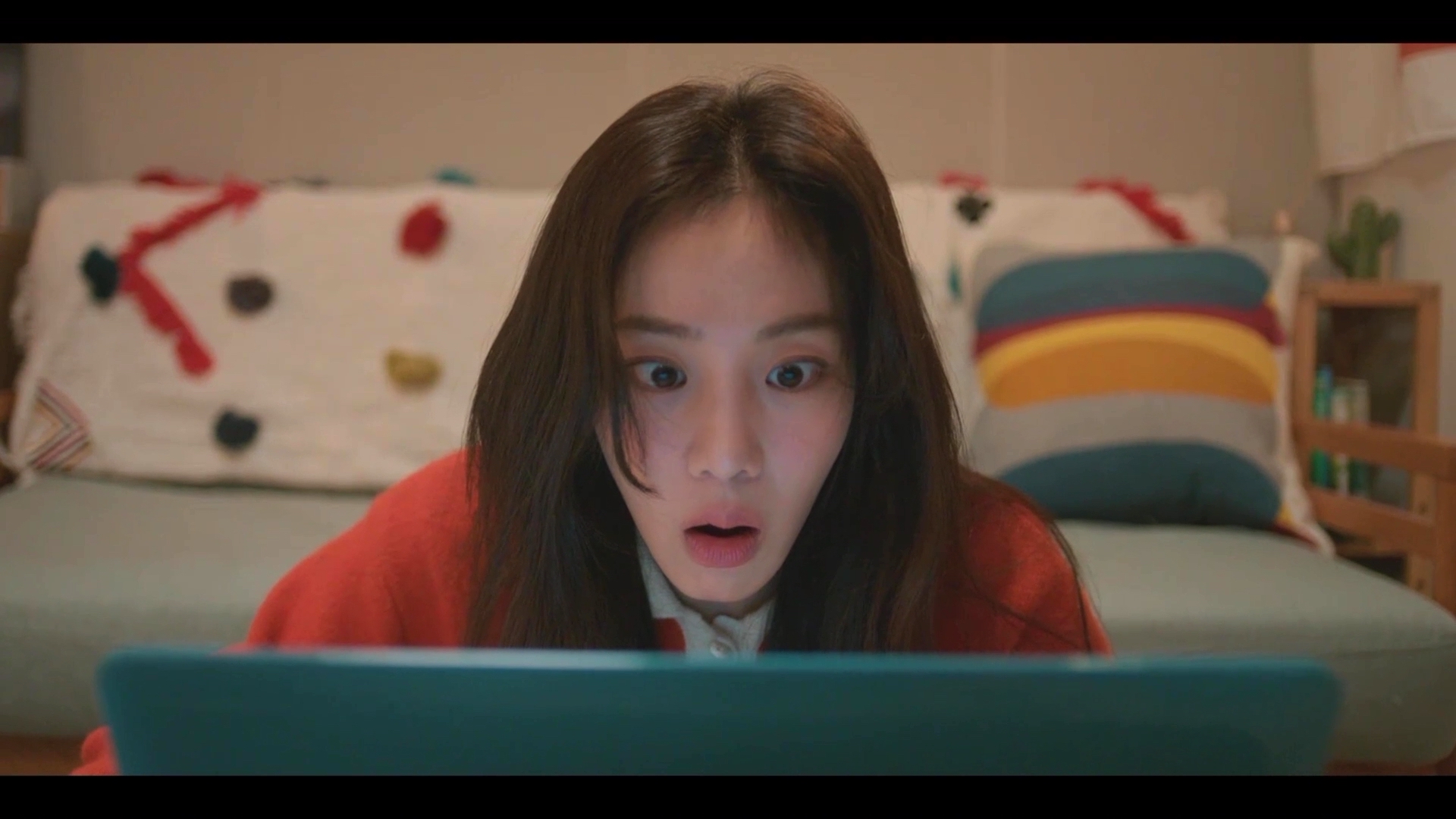 TVING’s latest original is here, and somehow Stock Struck packs a ton of wackiness into a 40-minute episode, all without losing those K-drama feels. I liked it way more than I was expecting to… because there’s nothing quite like a hyperactive heroine who wears her heart on her sleeve. 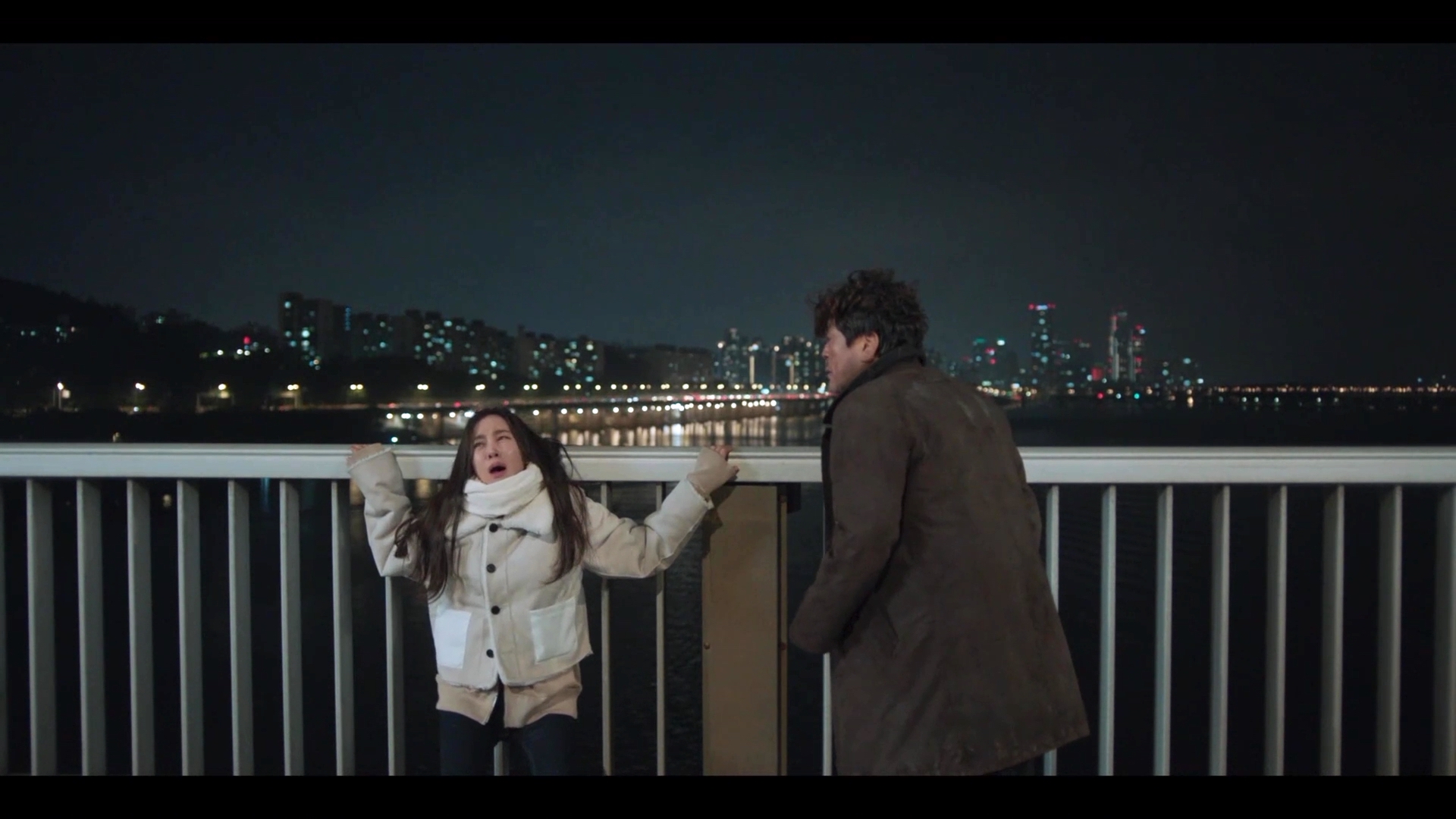 tvN’s streaming arm TVING seems dead-set on making it trying for international fans to watch some of their productions, but we won’t hold that against them (at least for now), because they’ve been pushing out a ton of content, and some of it quite good. And maybe Stock Struck will be one of those?

We first meet our heroine YOO MI-SEO (Han Ji-eun) at the Han River. She’s leaving a voicemail for her mother and about to jump, until things quickly flip from dark to comedic. A man grabs her and pulls her back from the railing; then, her dramatic over-reactions, cursing, and facial expressions set the tone for not only our heroine, but our drama. It’s excellently wacky! 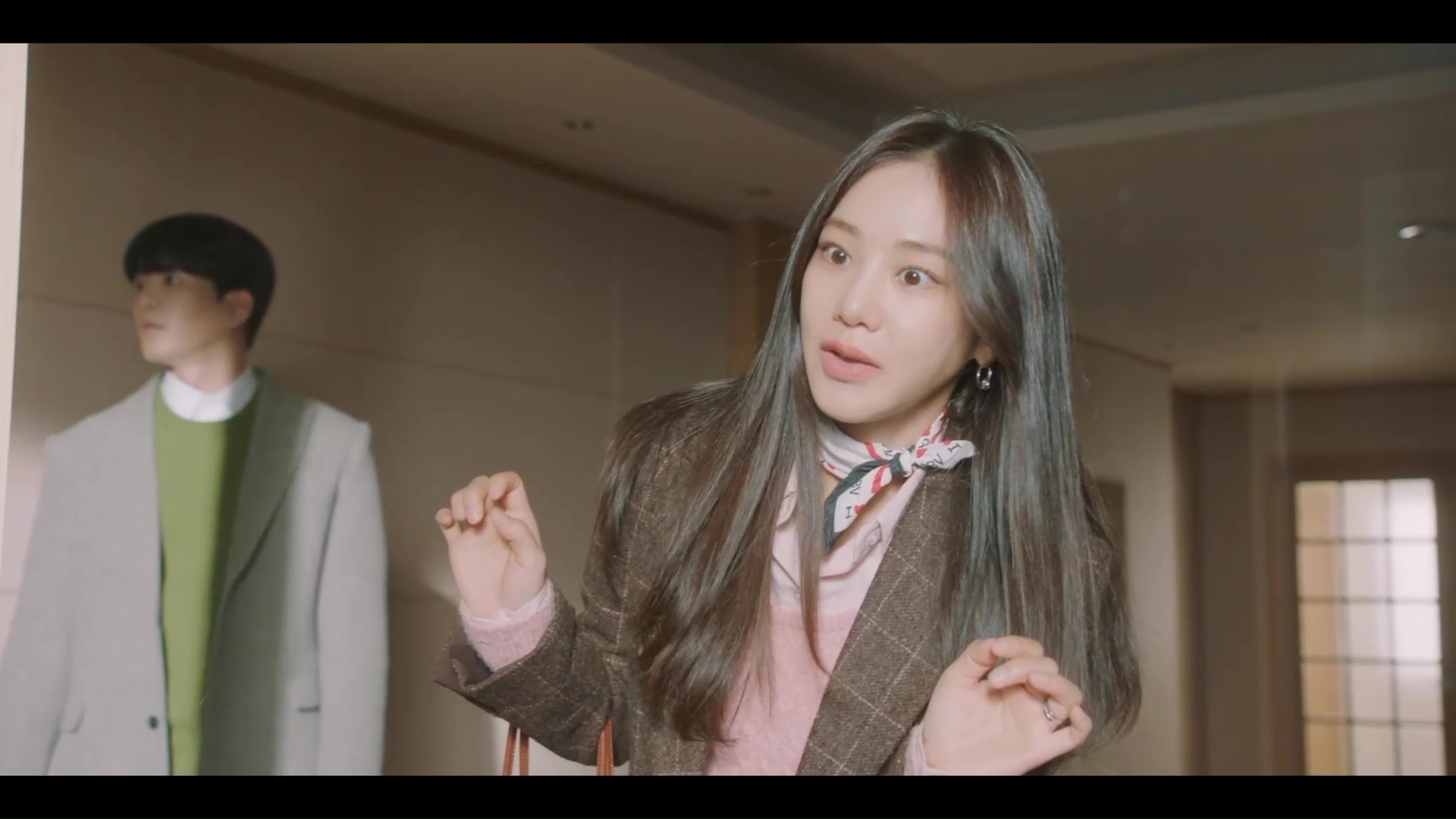 We jump to a month prior to learn what put Mi-seo into such dire straits. She’s trying to find an apartment with her boyfriend/fiancé CHOI JIN-WOOK (Go Yoon who I still can’t forget in Sisyphus lol). Like the everywoman that she is, Mi-seo wants to live in a light-filled apartment that’s preferably south-facing… and not with a view of the neighborhood hoodlums smoking a foot from her living room window.

But the rent is high — just as high as Mi-seo’s desired standard of living — and she gets more and more frustrated with her small income. She works as a sales person in a high-end shopping mall where she uses her dramatic personality, high energy, and some handy cosplay to coerce customers into buying the most expensive purse on the display. Really, she’s hilarious. Only fifteen minutes into the show and it’s clear that Han Ji-eun is ruling this whole thing, and it’s amazing. I love an actress that will give her all to the role, from leaning into the exaggerated behaviors and mannerisms, to cursing on the toilet checking her funds, to dancing for joy in the bathroom with pieces of toilet paper as her streamers. 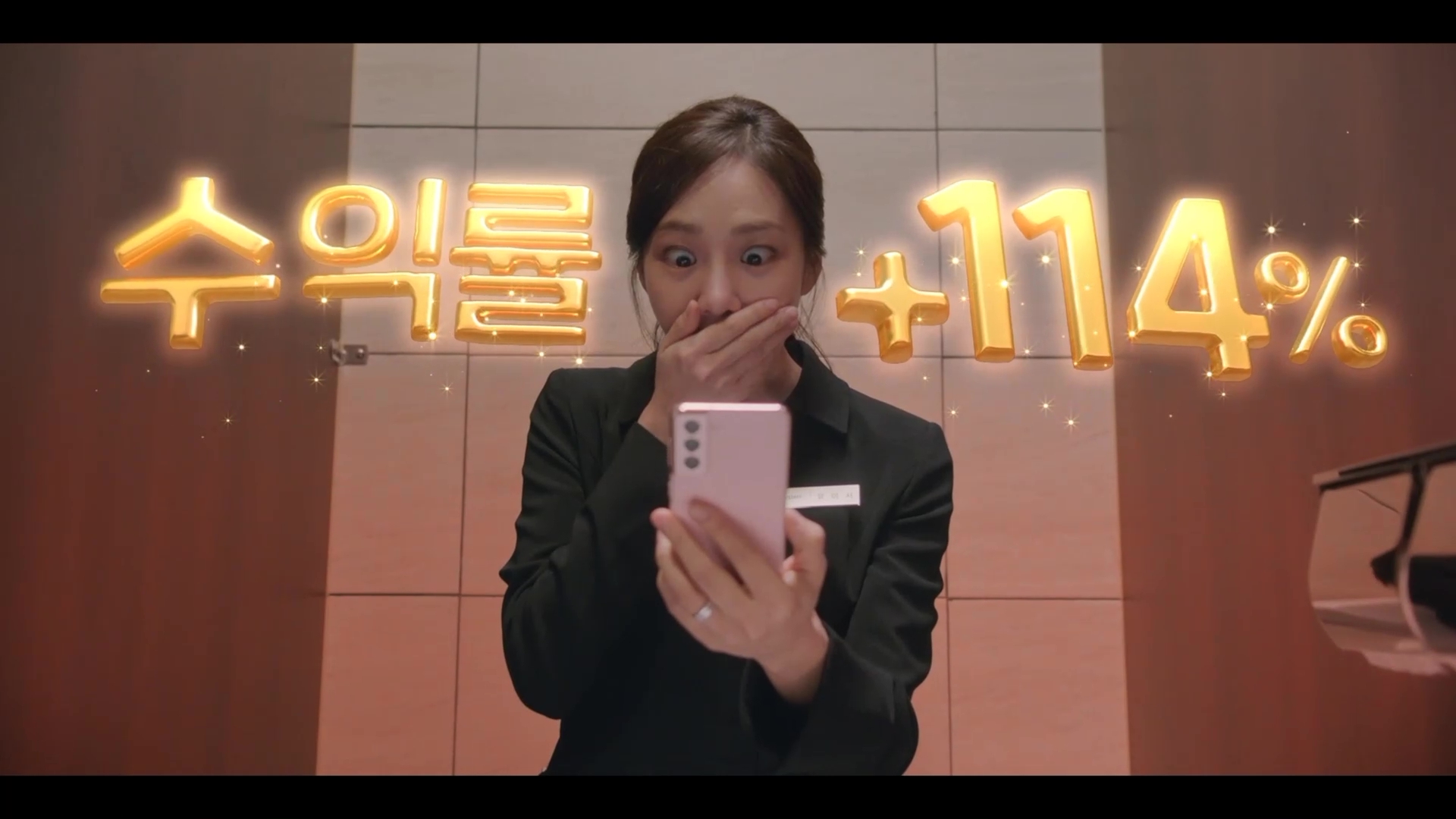 It doesn’t help that Mi-seo has a very wealthy friend… who just so happens to give her a Very Top Secret Stock Tip about a pharmaceutical company that’s about to release a new medication. The promise of a huge return — and her dream apartment available — is enough to spur Mi-seo to invest some of her and Jin-wook’s wedding savings.

And thus begins her slow descent. At first the stocks are up, and she sees so many gains that she invests all their money. But when it tanks and she’s in the red, she quickly panics, sells, and confesses to her risk-averse boyfriend.

Of course, the stock market is more volatile than she realizes, and just as Mi-seo is left in poverty with her totally furious boyfriend walking out on her mid-proposal when he finds out, the stock jumps again. If only she hadn’t sold, she would be… well… rich. It’s a rude awakening to the inner workings of the stock market and Mi-seo soon realizes she knows nothing. 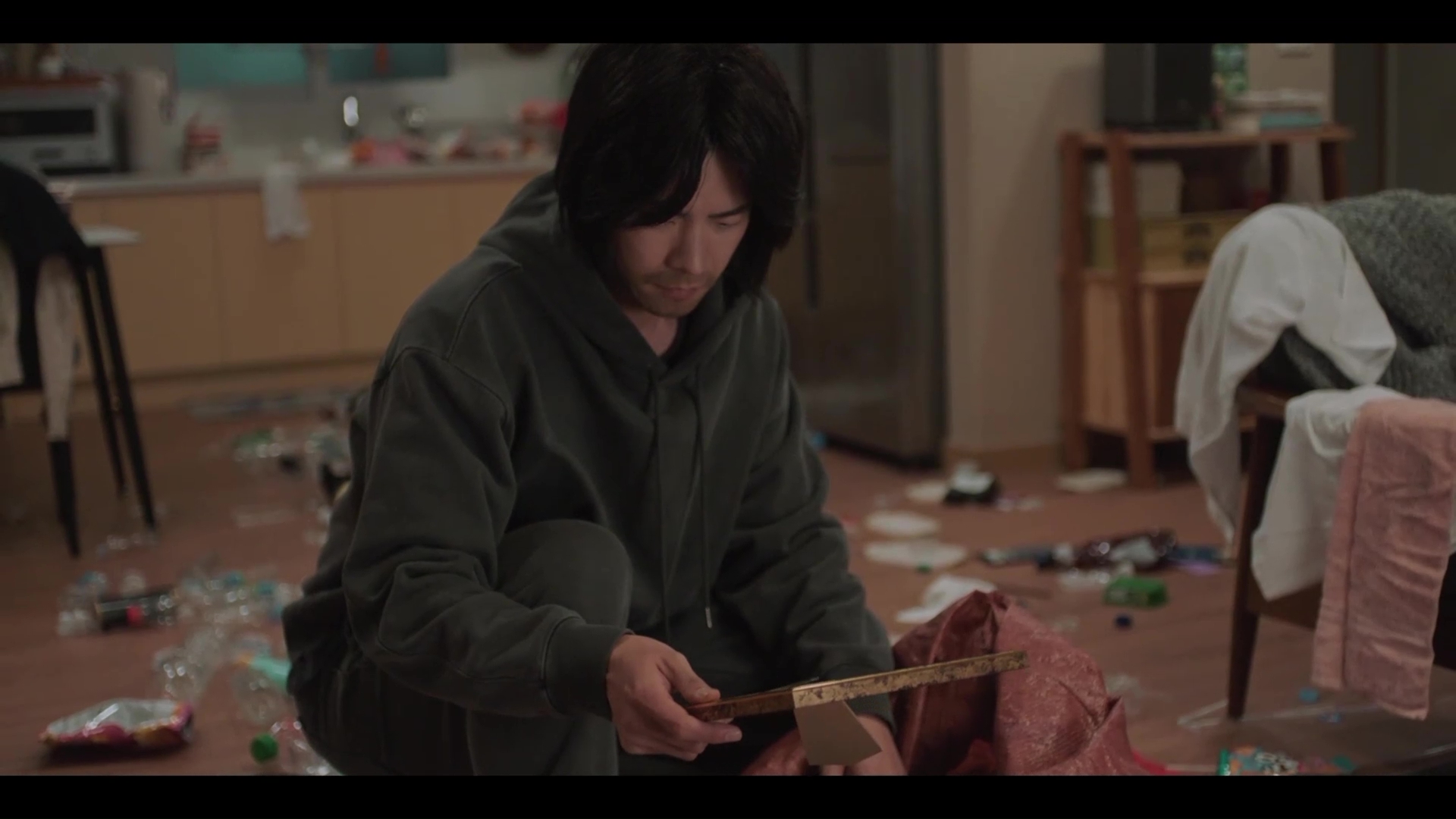 Our introduction to Mi-seo and her hyper emotional decision-making is intercut with the far more mysterious CHOI SUN-WOO (Hong Jong-hyun). We first find him living like a hobo in a beautiful apartment (much like the one Mi-seo wants) with such a collection of bottles and trash around him that it makes Mr. Gu’s bottle collection in My Liberation Notes look like an art installation. But something finally pulls Sun-woo out of his torpor, and he decides he’s ready to “live like a human” again.

Gone is the garbage, shaved is the fake stubble, and trimmed is his head of crazy hair. Underneath that mess is a super handsome Seoul University grad who’s just taken a job at a local convenience store. When some old classmates come into the store and recognize him, it’s as close as we get to his backstory: he’s been on a year’s probation, just missing a prison sentence.

There’s a tangle of a story behind him, and some financial dealings that seem to have gone south, but Sun-woo is completely and immediately likeable. It’s clear that he’s smart, kind… and also loaded. 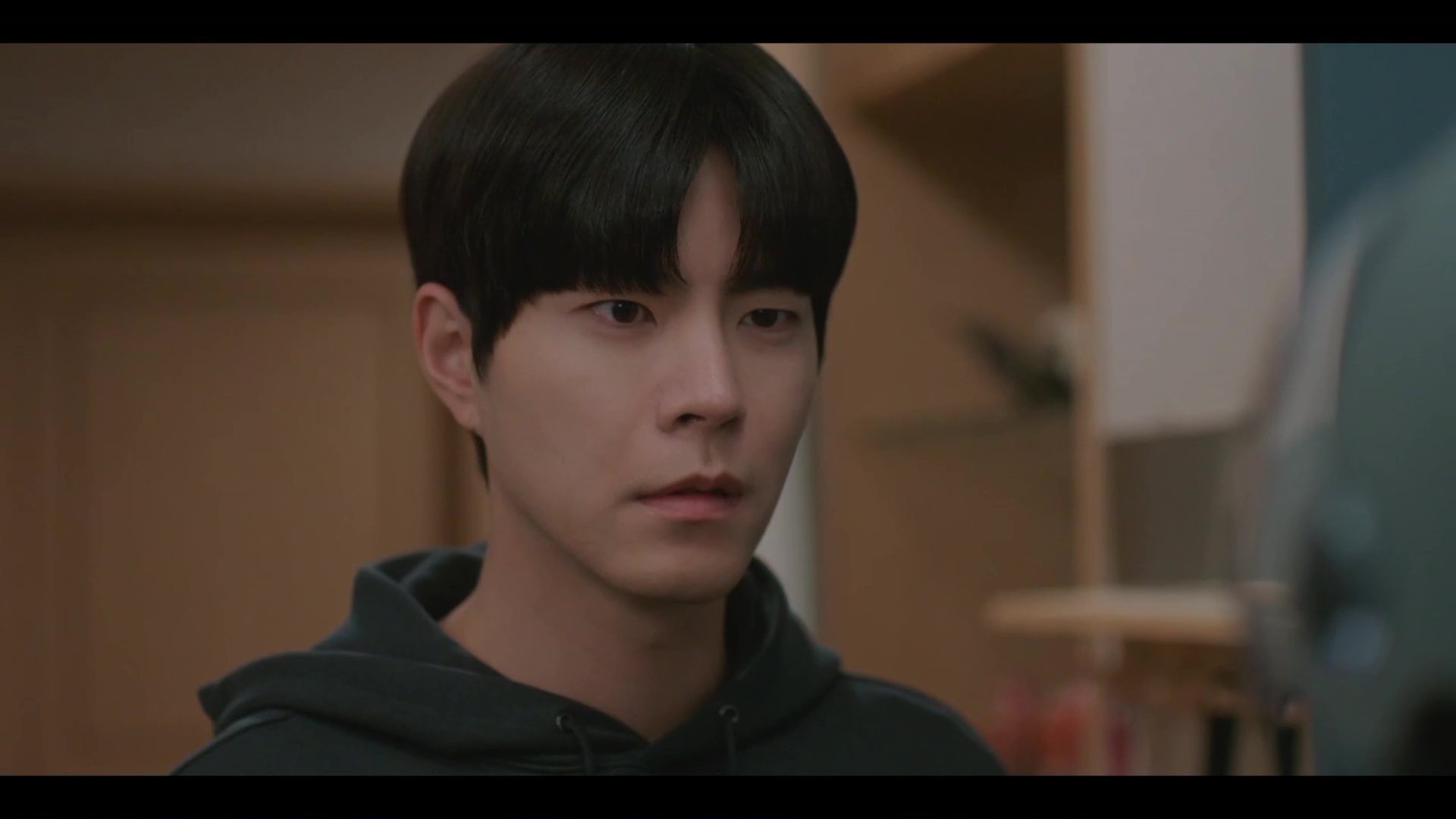 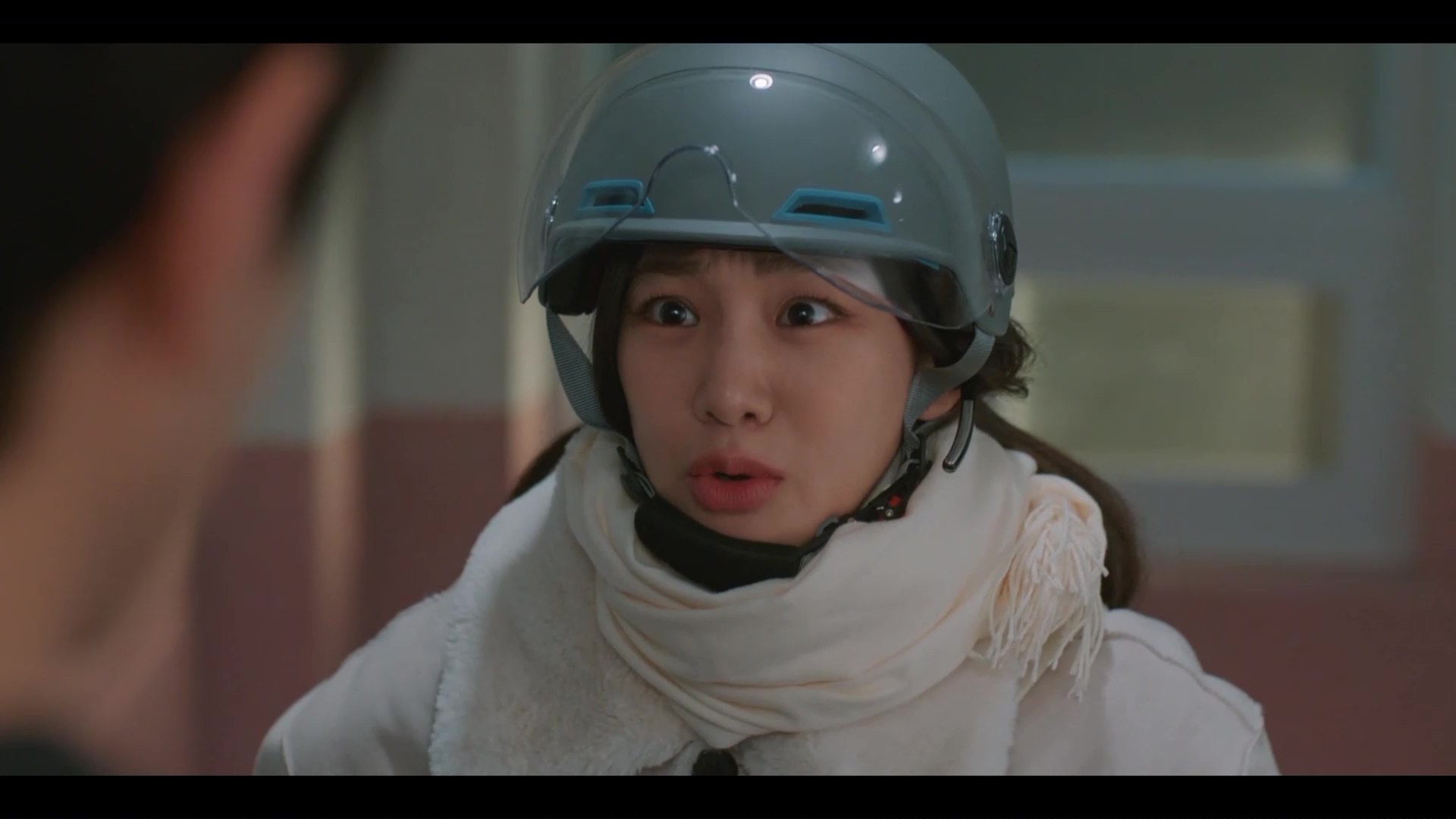 Because this is dramaland, he’s destined to meet our wacky and financially-challenged heroine — and it plays out in a fun way. The very day that Sun-woo decides to rejoin society and do things like buy a cell phone and takeout noodles, is the same day that Mi-seo decides she doesn’t want to die. In fact, it’s Sun-woo’s noodle order that gets delayed by over two hours because of Mi-seo’s Han River stop. When she finally delivers his meal it’s comically inedible, but their meet-cute (I’m just going to go out on a not-so-risky limb and call it that) is important for showing us how different their personalities are.

And then they meet again, when Mi-seo buys alcohol and lottery tickets from his convenience store. She’s drunk and carrying on like a fool, throwing non-winning tickets onto the ground, and Sun-woo is behind her with his little vest and broom, sweeping them all up, telling her the lottery is a waste. 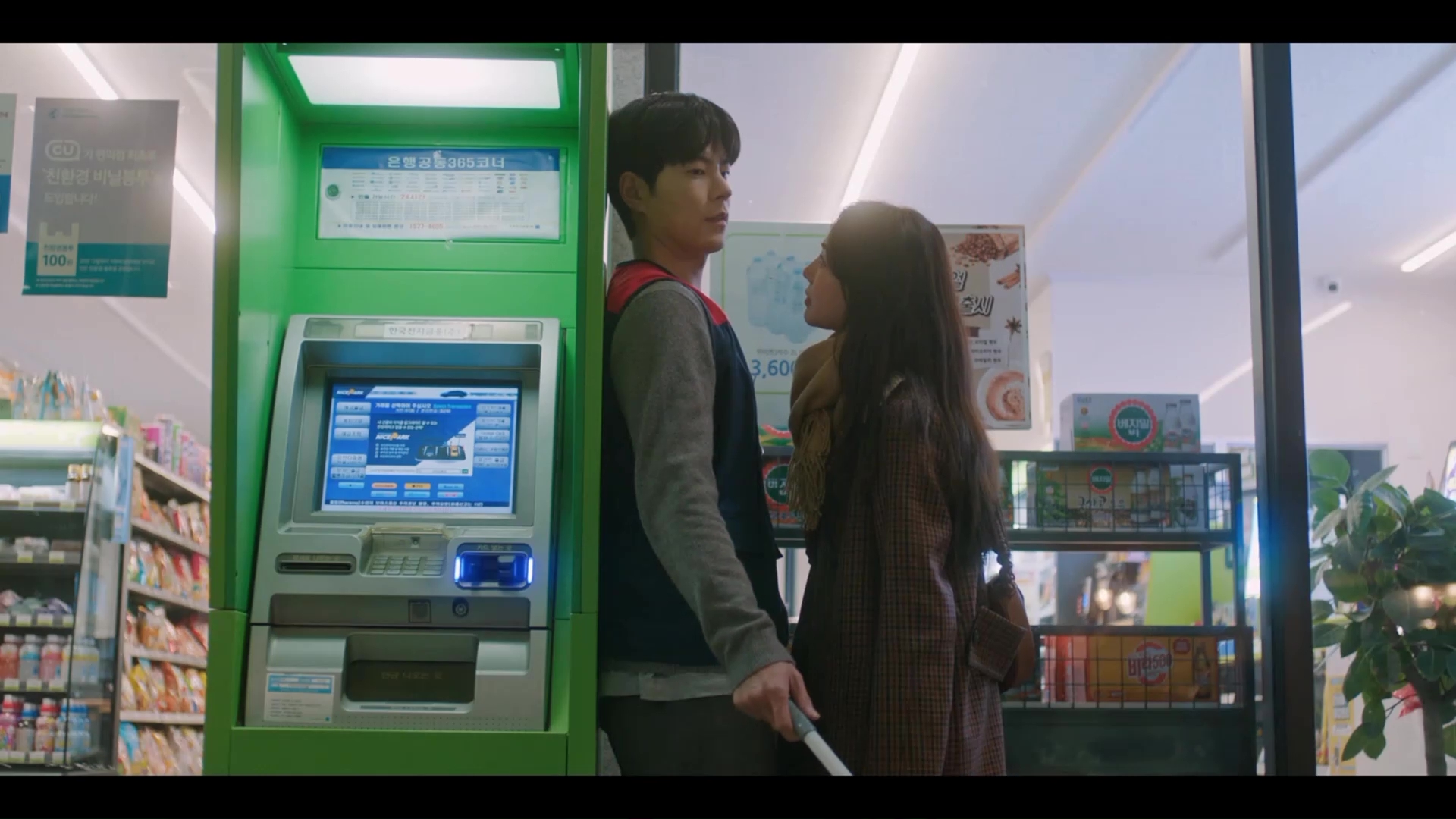 It’s not till the end of the episode that we hit our main plot, and not so incidentally, their third meeting. Mi-seo signs up for a stock market group, taught by a stock guru. She goes to the meetup where the other students are waiting: a dashing harabeoji KIM JIN-BAE (Jang Kwang), the glamorous-looking JUNG HAENG-JA (Kim Sun-young), and the slightly odd KANG SAN (Jung Moon-sung).

Mi-seo wonders who among them is the guru… but the guru hasn’t arrived yet. And of course, when he does, it’s none other than Sun-woo. He emerges from a luxury car surrounded by a cloud of money, thanks to the show’s hilarious use of cheesy onscreen graphics. And if that doesn’t tell you everything about this drama, I don’t know what does. 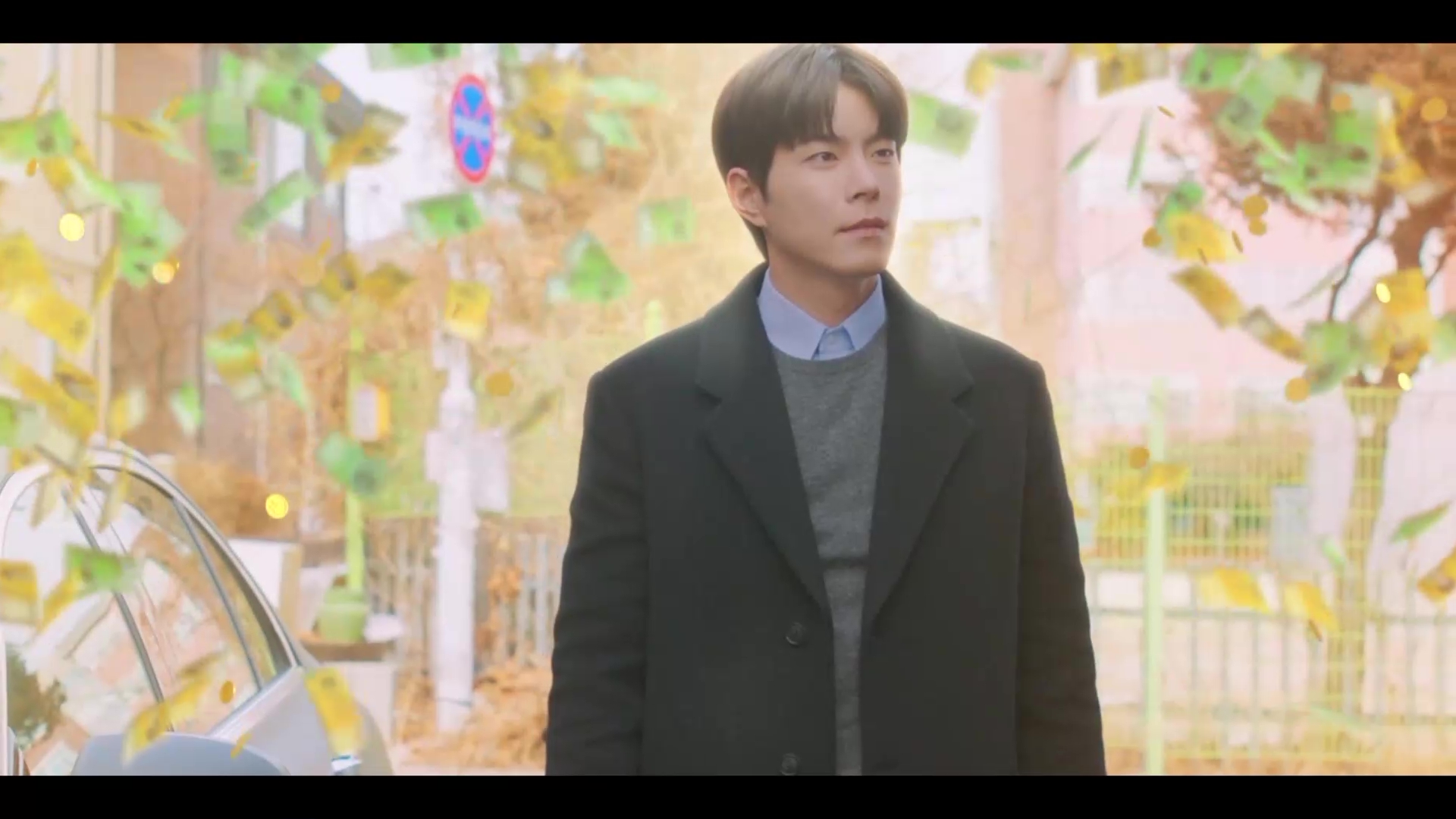 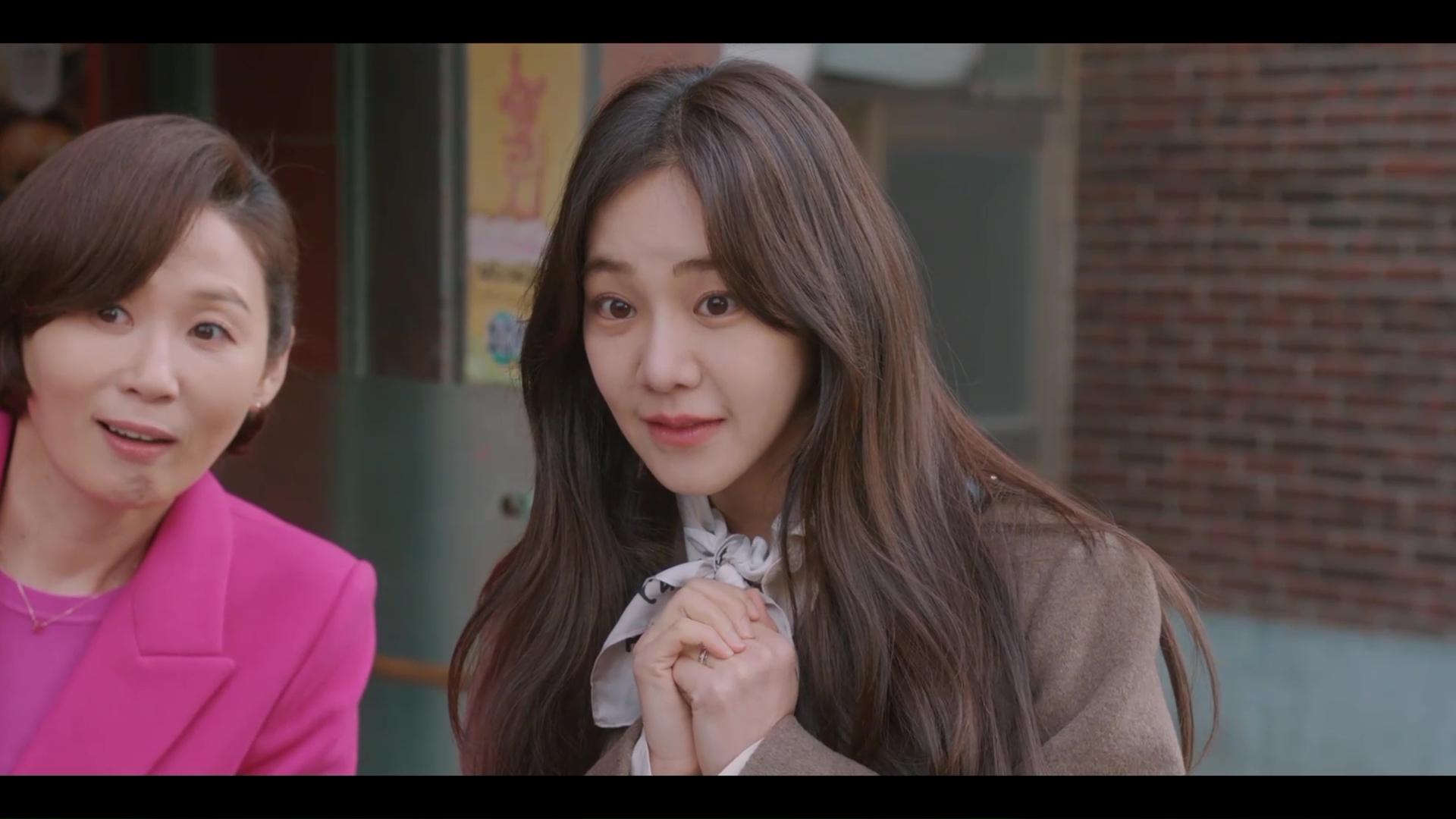 It’s a really fun first episode — though mostly setup, it’s so character rich and exaggerated that I couldn’t help but really enjoy it. The flavor, for sure, is not for everyone, but if you’re the sort of drama fan that gets a kick out of ridiculous sound effects, a heroine that fake-faints to get her boyfriend to react, or frequent onscreen graphics (e.g., Mi-seo breathing literal fire and screaming “Shibal!” in her favorite bathroom stall)… well, that’s the sort of drama this is.

However, for all the over-the-top acting and ridiculous moments, it never felt like too much. I think that’s because not only is the drama doing it entirely on purpose and for the fun of it, but it’s grounded by a premise that’s rather relatable. And so, in the end, we wind up with a drama that has all the strangeness of a much older and less polished show, but one that grabbed my attention because of all the fun it was having — and all the fun I was having while watching. 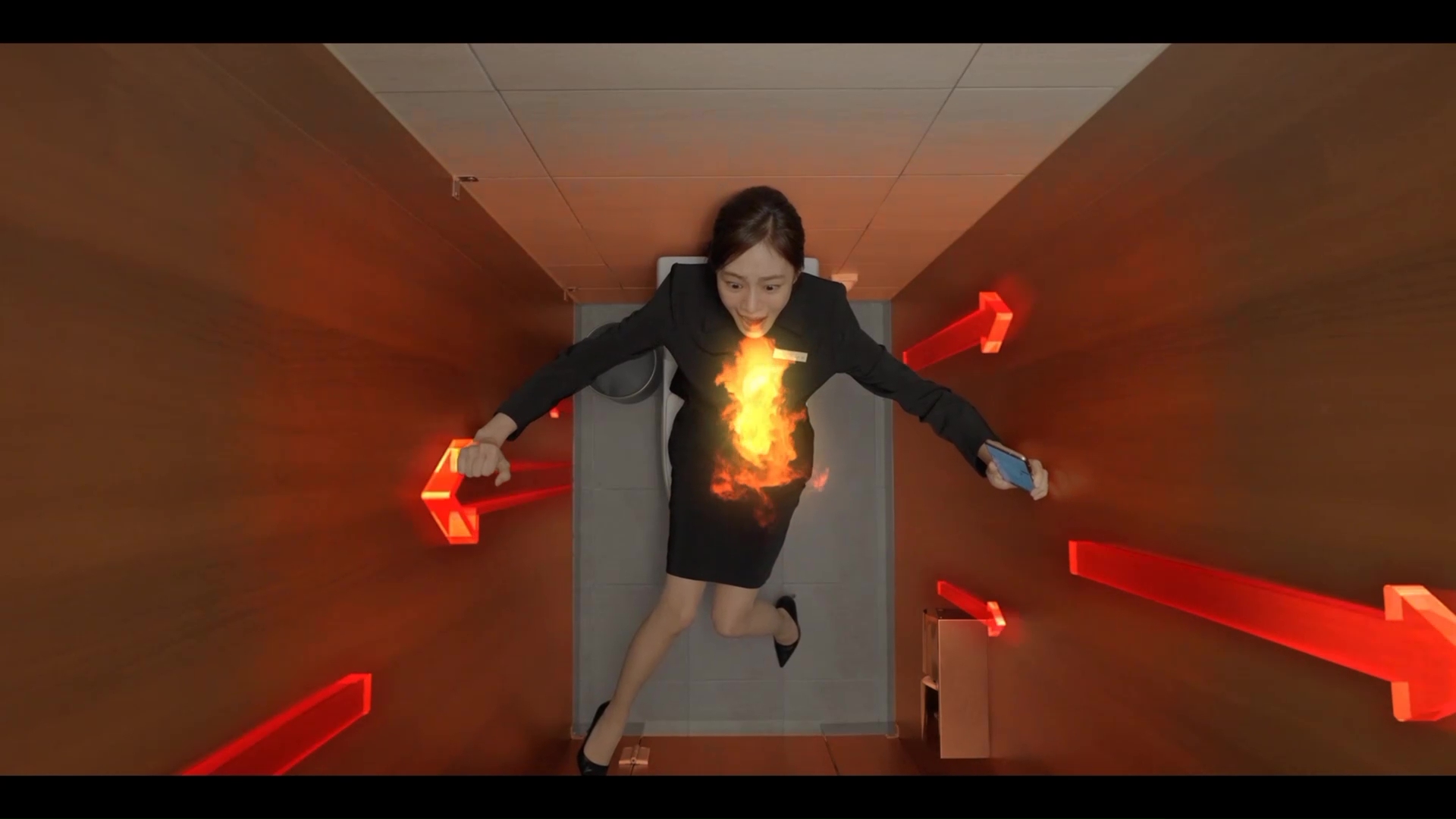 @missvictrix thank you for capturing this for those of us that can’t access it. This sounds like a great intro to the series, and exactly the kind of drama I was looking forward to watching.

“ with such a collection of bottles and trash around him that make Mr. Gu’s bottle collection in My Liberation Notes look like an art installation.” 😆😆😆

I want to watch this show very much 😞

My apologies if this has been mentioned before but will this be streaming?

I want to know this too

4 parkchuna is celebrating on the Rooftop

I know what to check out now! I hope the recap continues @missvictrix

The first episode was OK. The female lead's perky manipulative salesperson approach to getting what she wants could be tiresome in the long run. Her "friend" left her out to dry when not counseling a novice on when to sell her shares. Perhaps the whiff of Cleaning Up is still in the air, but insider trading/stock investing quick rich, solve all your problems thinking is a tired topic.

The formation of the group of odd people reminds me of the Beardstown Ladies, a group of women who formed an investment club in 1983 to learn and invest in securities. Back then, Investment clubs used to be a big fad for a short while. Today, no one can remember them.

I am not familiar with Han Ji-eun. I do not know if she can anchor a series like Kim Se-Jeong in Business Proposal or Today's Webtoon.

I'm not watching this, but enjoyed reading the recap @missvictrix ! ^^

I have seen Han Ji-eun in one drama so I don't know much about her. However, it's cool that she's going all in with her wacky, dramatic character, heh.