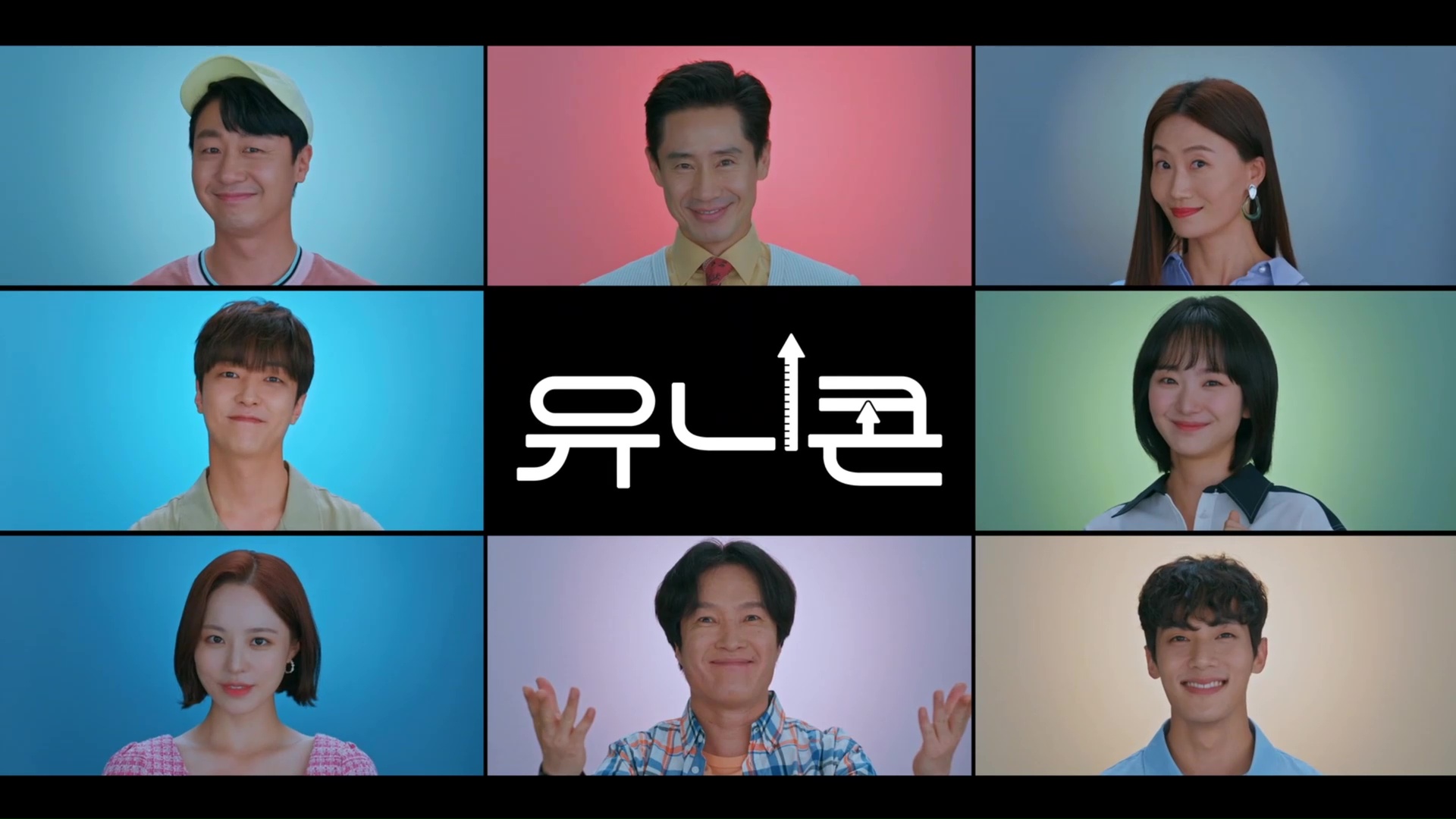 It has been a while since a sitcom has graced the small screen, and while it might not be to everyone’s taste, I think to the right target audience, Unicorn has the potential to be a rollicking, crazy ride. Filled to the brim with jokes, the first episode dives straight into the wild world of our characters and their strange startup led by their even stranger CEO. 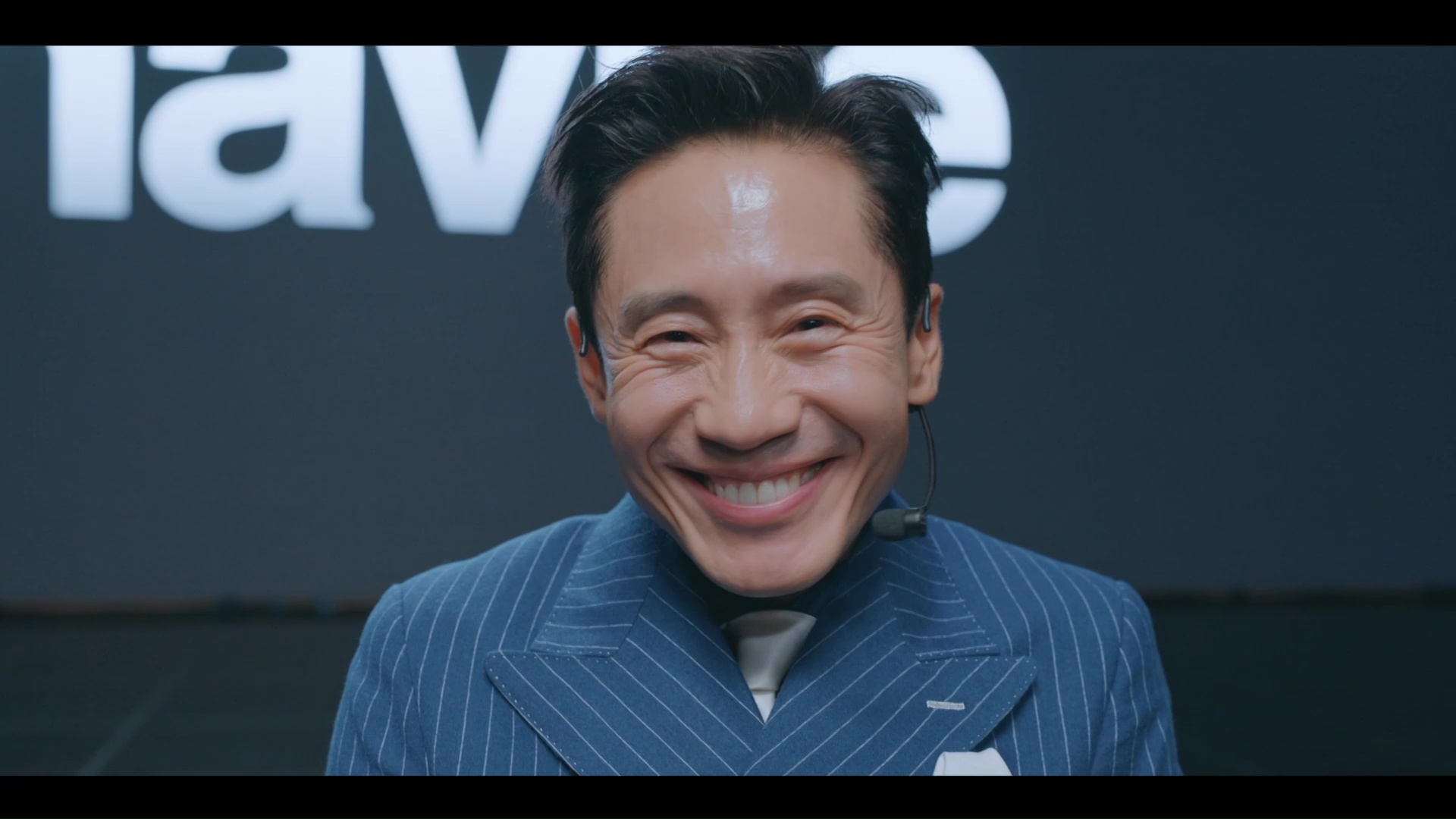 Welcome to Maccom, a startup run by the one and only STEVE (Shin Ha-kyun). It is a free-spirited company that values its employees and tackles humanitarian issues to better the world… or at least that is what Steve believes. In reality, latest addition JAY (Lee Yoo-jin) learns that his new workplace is not quite what he bargained for, and maybe next time, he should reconsider accepting a job through Clubhouse.

Jay’s first look into Maccom starts at Demo Day, and the showcase gives him a little insight to his future (spoilers: it is not pretty). His senior, ASHLEY (Won Jin-ah) introduces him to CAROL (Bae Yoon-kyung) and PHILIP (Kim Wook) from marketing, and it is clear that the former is the brain and the latter is just happy to be here. They make an eclectic bunch, but anyone who works for Steve is probably a little insane.

During the showcase, their CEO goes missing, so Carol pushes Philip onto the stage. As he stumbles through the presentation, engagement wanes, and right when it all seems unsalvageable, Steve makes his dramatic entrance. He blows the audience away with their fancy neurofeedback technology, and once the auditorium explodes into cheers, he introduces the culmination of their work: “HCHAVNE” (the h is silent). The enthusiasm in the room drops to zero in a matter of seconds, but Steve seems unaware of the shift as he beams with pride at their down perm machine for men. 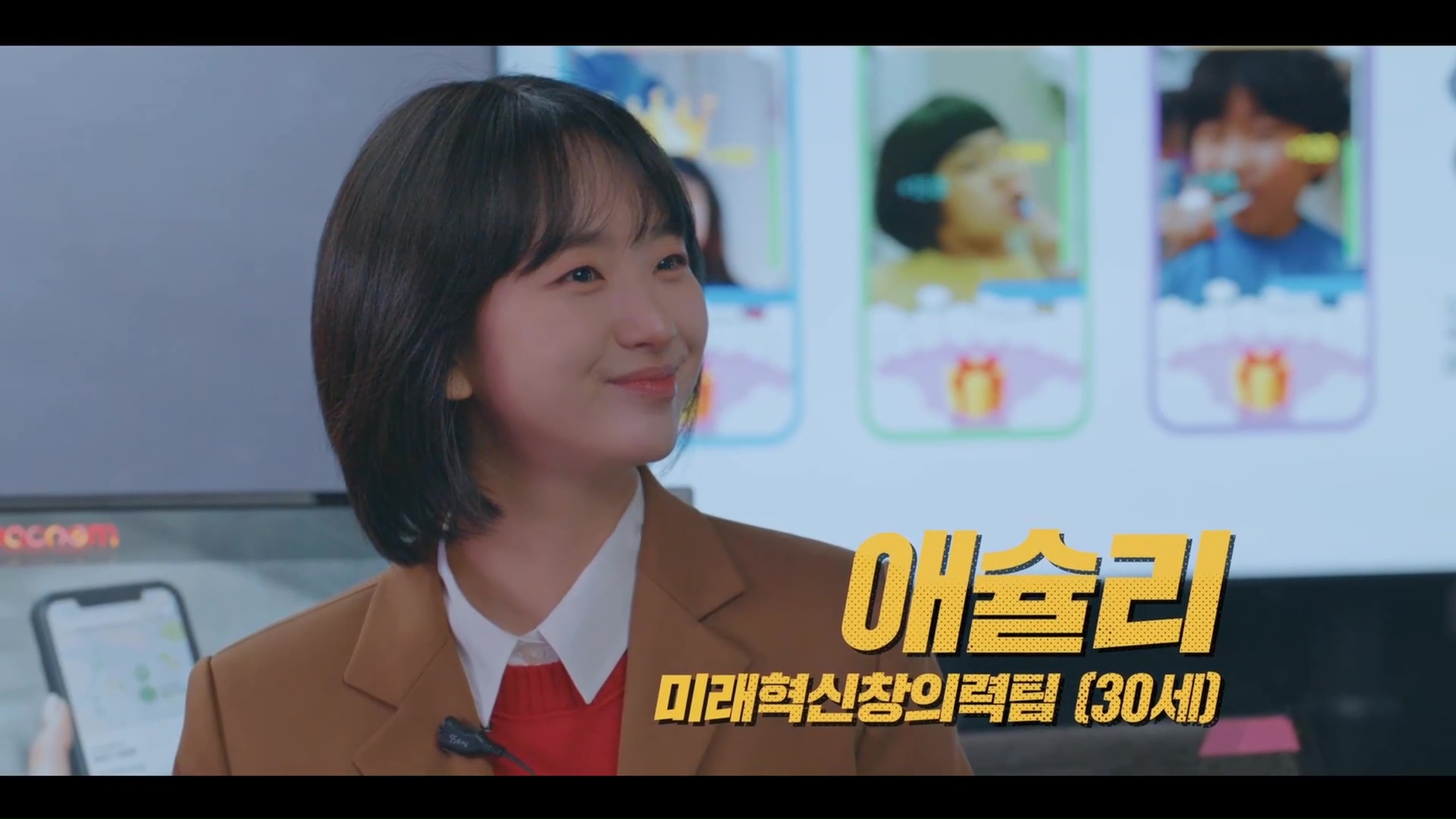 Though it is only Jay’s first day in the office, Steve puts him to work immediately, and tasks him to handle their current crisis: how to get Steve verified on Instagram (mind you, his personal account). To Ashley’s shock, Jay was recruited as her superior, but her expression only falters for a moment before she plasters on a smile and rolls with the crazy.

In the middle of their meeting, Steve accidentally reveals a message from “Kucci” Korea, asking him to take down a post of him lying about a sponsorship since it ruins their brand image. While Steve tries to hide this embarrassing blunder, Carol sees this as an opportunity and suggests uploading an apology video since those are all the rage with Youtubers now-a-days. Steve thinks it would be humiliating, but Carol dangles the shiny, blue checkmark in front of his eyes and gets him to comply. 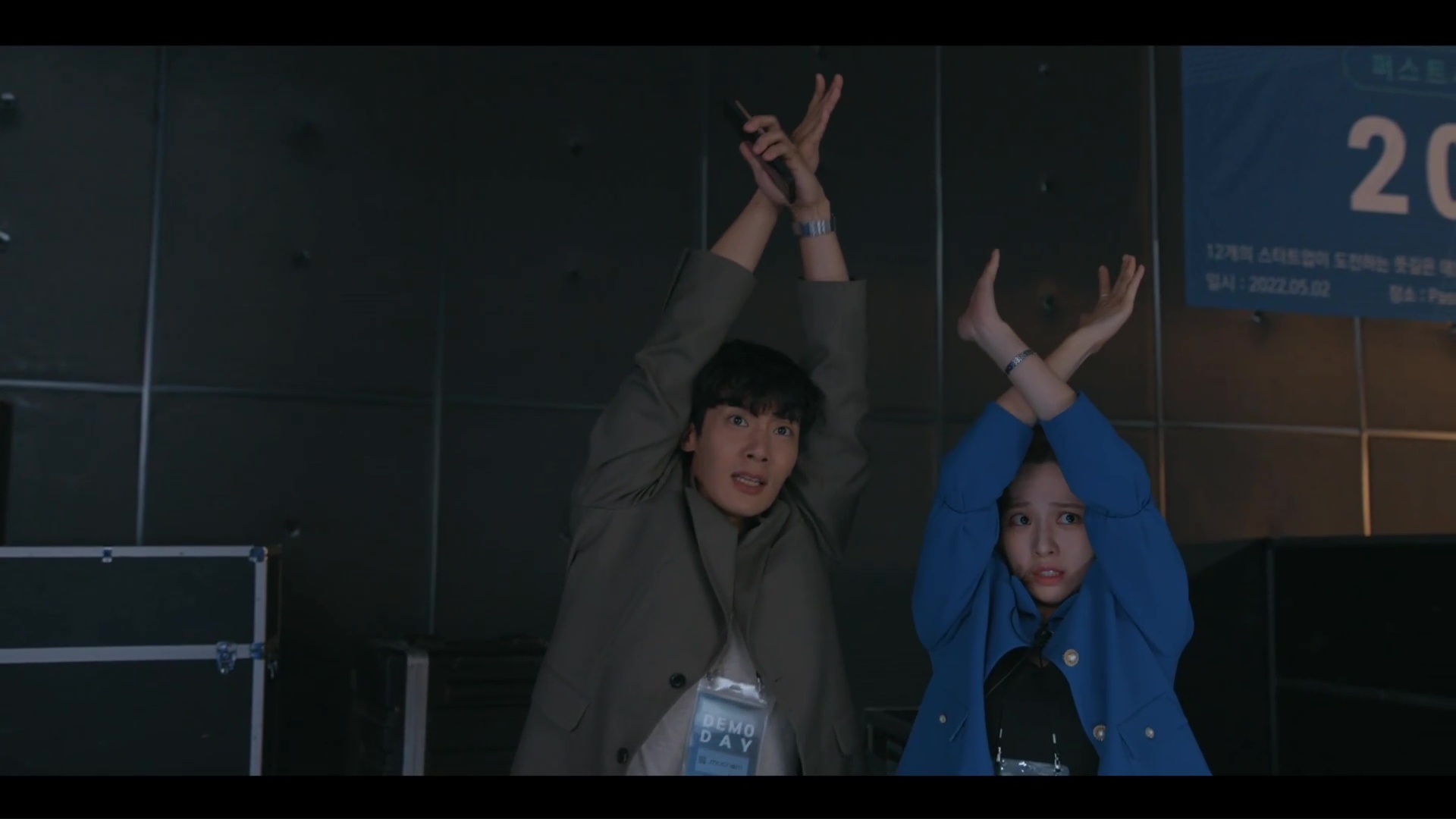 The next day, Steve’s dreams come true… but at a cost. Someone made a video trashing their product, and the media is having a frenzy calling their machine “expensive garbage.” Steve assures his employees that all press is good press, but as soon as they leave his office, he curls up into a ball and cries under his standing desk.

That evening, Steve meets with his therapist (a little reunion with Save The Green Planet! costar Hwang Jung-min), and asks her when spring will return to his life. His company is about to collapse, and the only thing left is How Match, a dating app which apparently only accepts users over sixty. He turns to his therapist for advice, and in a serene voice, she tells him, “Try to stop thinking that life is hard.” Pfft.

Every cloud, though, has a silver lining, and as it turns out, How Match might actually be Steve’s big break. One of his developers notices a sudden spike in users on their app, and a chorus goes off in Steve’s head. It’s time to pivot (again)! 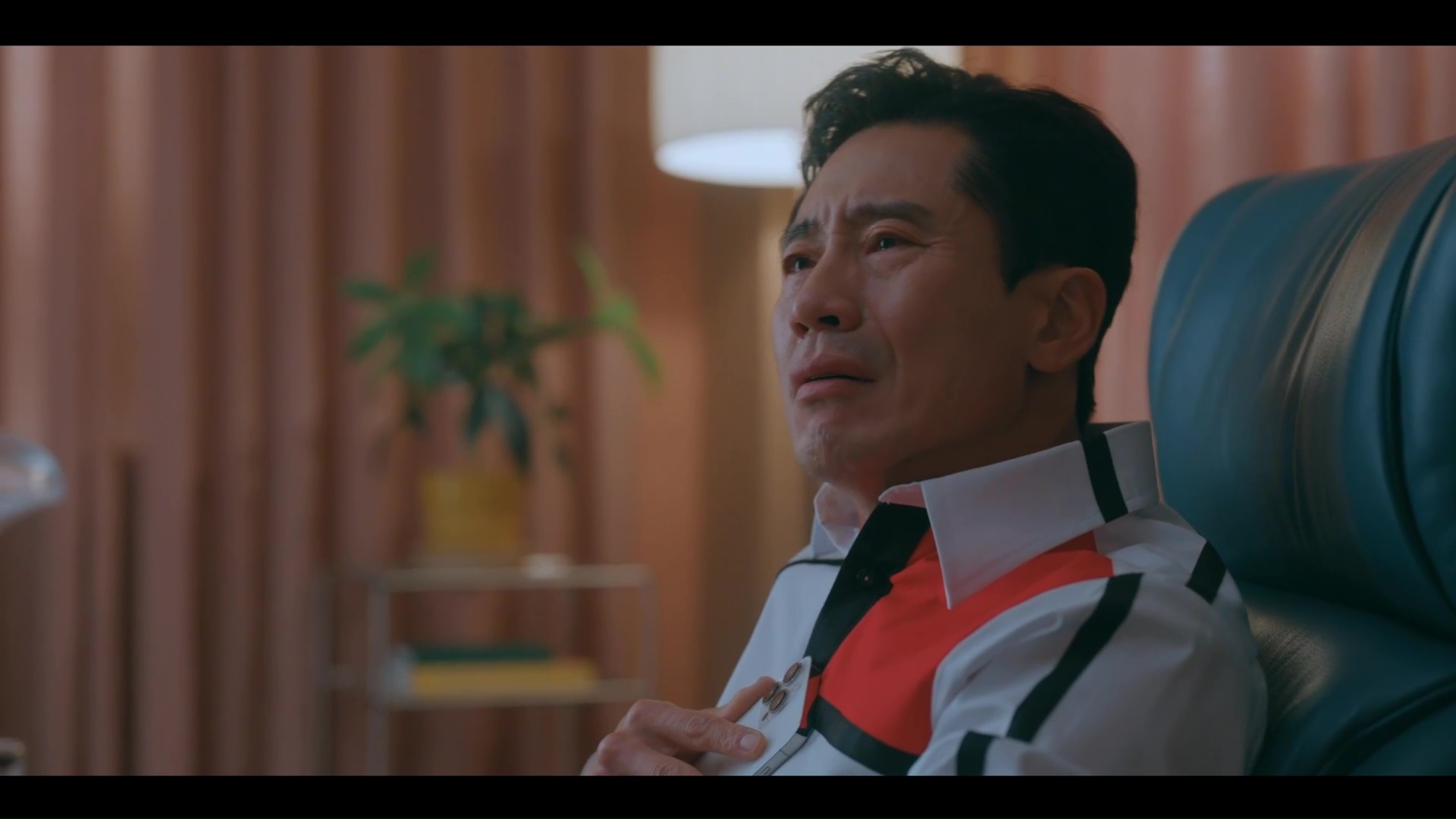 Unicorn delivered a fine pilot episode that got a few chuckles from me. It’s obvious from the get-go that Yoo Byung-jae is writing this show, and if you’re a fan of his brand of humor, this is right up your alley. Though I wasn’t blown away, I thought some of the more subtle jokes were hilarious, and the attention to detail is what managed to hold my interest. One of my favorite scenes was when Jay tours Steve’s office and notices a list of potential celebrities they wanted to invite to their company event: Kang Dong-won (“too busy woodworking”), Kim Yuna (“Really? How dare we… Whoever wrote this bring me a written apology.”). It’s throwaway jokes like these that help flesh out this wacky world, and they’re littered throughout the show.

The other highlight — and appeal of the show — is its cast. I love Shin Ha-kyun in comedies, and it’s been a while since he’s been the butt of the joke. As expected, he plays Steve with gusto, and I already want to punch him in the face but also pat him on the back. Won Jin-ah is also great in her role, and I knew she was perfectly cast after watching her try to get Steve’s watch. She has a slightly off-beat and restrained delivery that acts as a nice foil to Steve’s more boisterous personality. 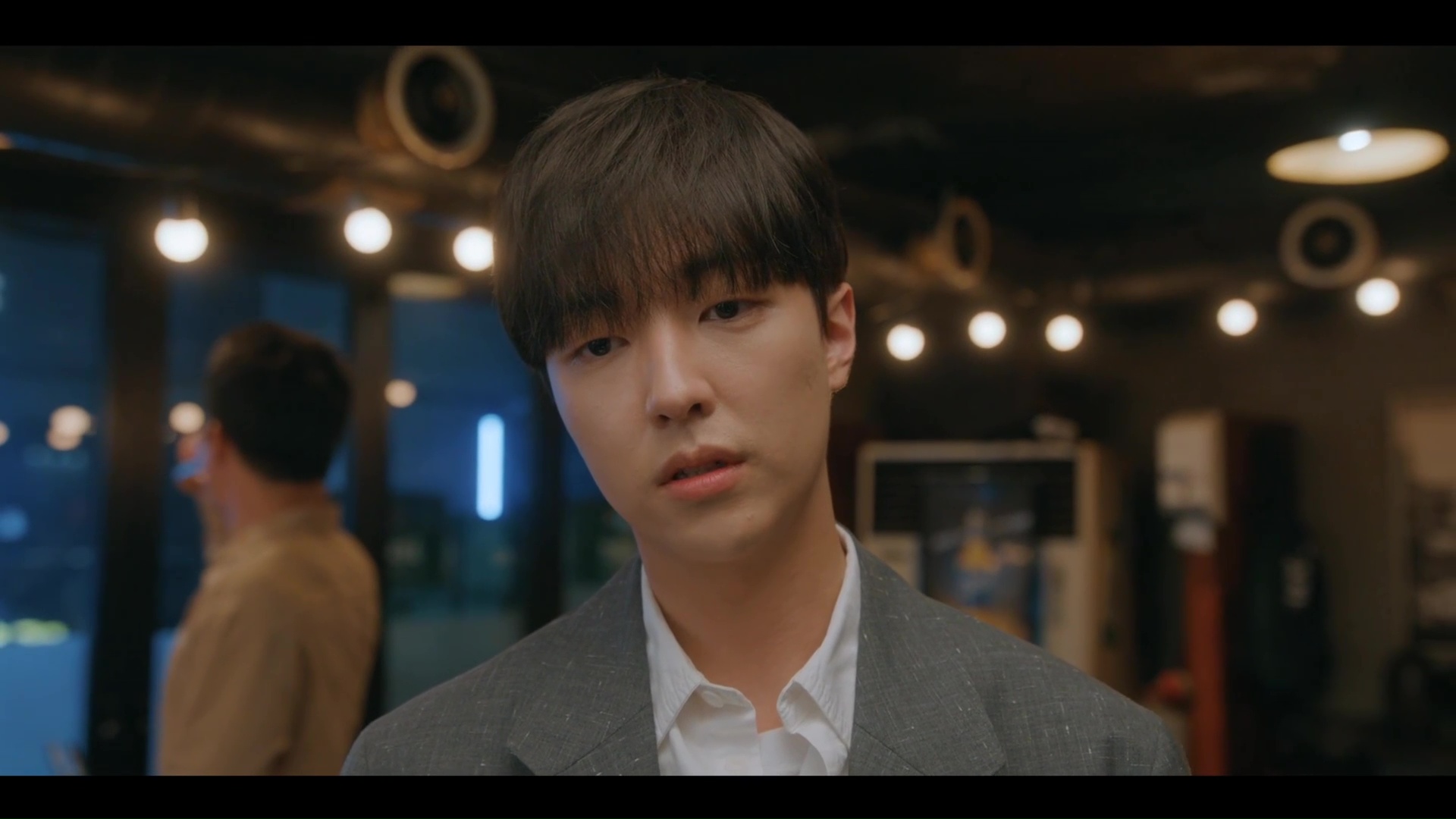 While a lot of scenes were funny — mostly in a cringey sort of way — there were a few big ones that missed their mark for me. For example, I thought the scene where Jay meets up with his friends after work felt too long and had a lackluster payoff. It’s a classic Yoo Byung-jae joke with all the awkwardness and witty remarks, but it dragged on and became repetitive. The situation was humorous, but all the heavy lifting was passed onto the writing and the directing fell flat. As a result, it works for the first punchline, but loses its charm thereafter.

This is director Kim Hye-young’s first solo credit, and it feels like she has yet to find her own voice. This isn’t necessarily a death sentence for the show, but it seems that my expectations may have been too high, since director Lee Byung-hun is also on the project. The unique flair that was present in Be Melodramatic isn’t quite here, but if Director Kim can capture some of that magic again, I think it will work well with Yoo’s more absurdist humor. It’s still only the first episode, and since a few key characters haven’t been introduced yet, I hope things will get better and funnier as the show progresses. 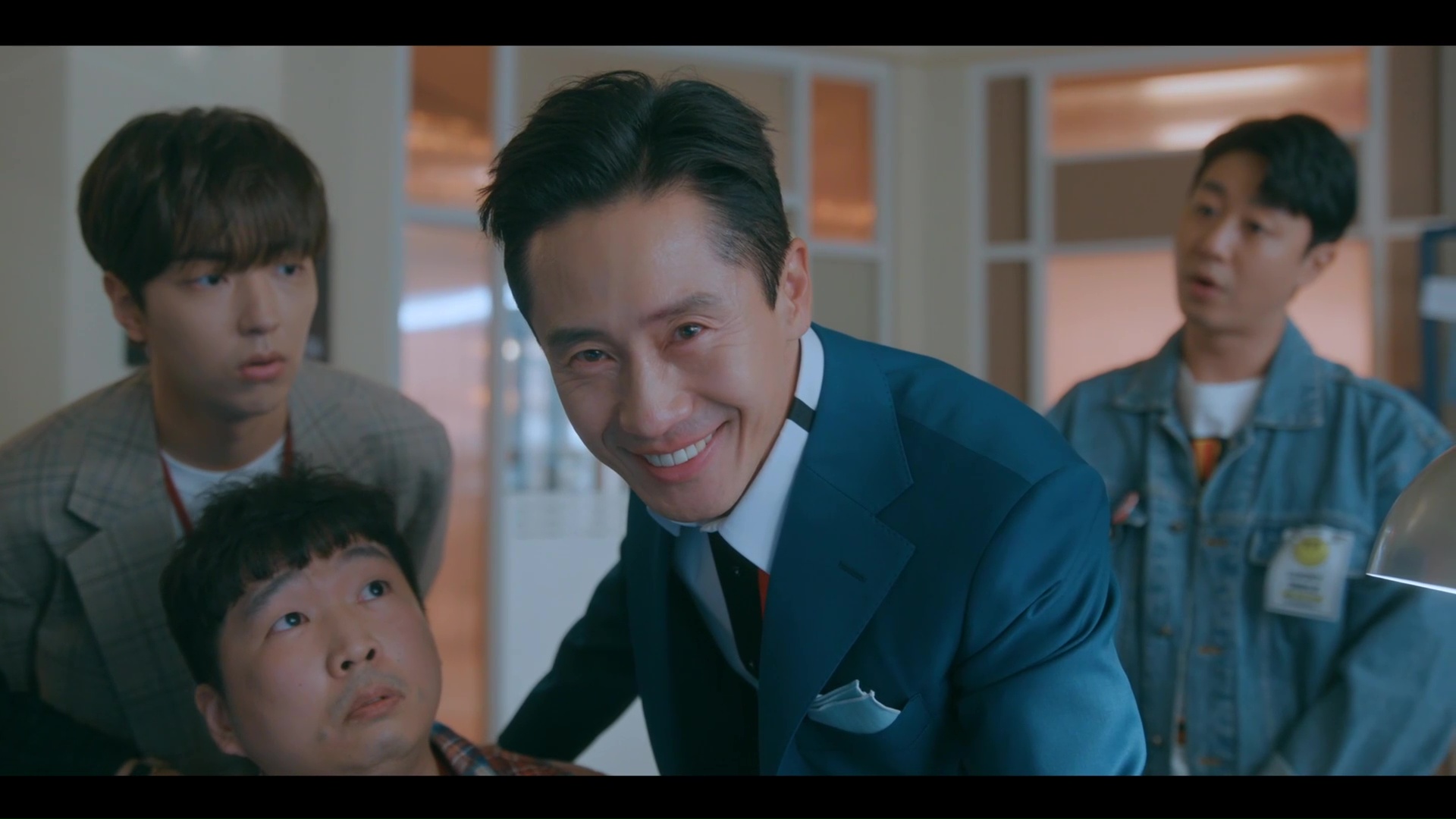 I didn't quite capture the reaction of the crowd during the HChavne presentation. Yes, he's so dumb to apply neurowaves to hair perming after all the magnificent applications that resonated in standing applauses...like I was disappointed myself despite not being a venture capitalist. I was jolted from wow!
daebak! to ice cold, completely stunned, and letdown.

I enjoyed the absurd humor x comedy for most of the time. Another happy pill sighted. And, Steve needs a Carol in his life for tethering.

I knew it was the sitcom version of Start-Up!

Is it just me or the Philip guy does really look alike Jung Ga Ram from Love Alarm?

I can't comment on the resemblance since I haven't watched Love Alarm, but if you'd like to see more of Kim Wook (the actor who plays Philip), he had a lead role in the webdrama Cat's Bar! It's a quirky and heartwarming show, and he was very likable in it☺