A woman from a prestigious family wants to remain a just prosecutor even in the face of politics and political pressure. When her husband's scandal threatens to destroy everything, she confronts ruin.

A woman from a prestigious family wants to remain a just prosecutor even in the face of politics and political pressure. When her husband's scandal threatens to destroy everything, she confronts ruin. 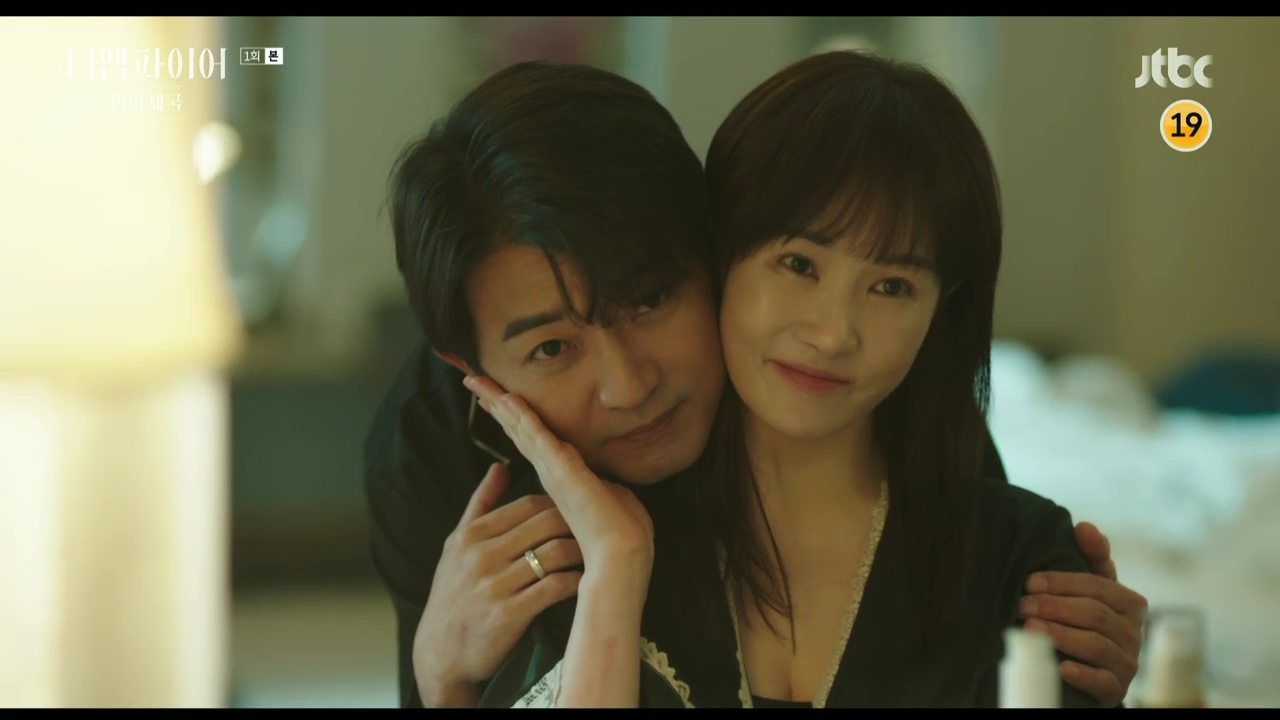 JTBC’s legal melodrama The Empire premiered over the weekend and it’s full of political scheming, ruin to come, and sumptuous chaebol breakfasts. I can’t say I enjoyed the episode much, but that’s less because it was poorly done, and more because it feels like a plot I’ve seen a hundred times already.

Editor’s note: If there is sufficient interest, drama coverage will continue with weekly hangouts. 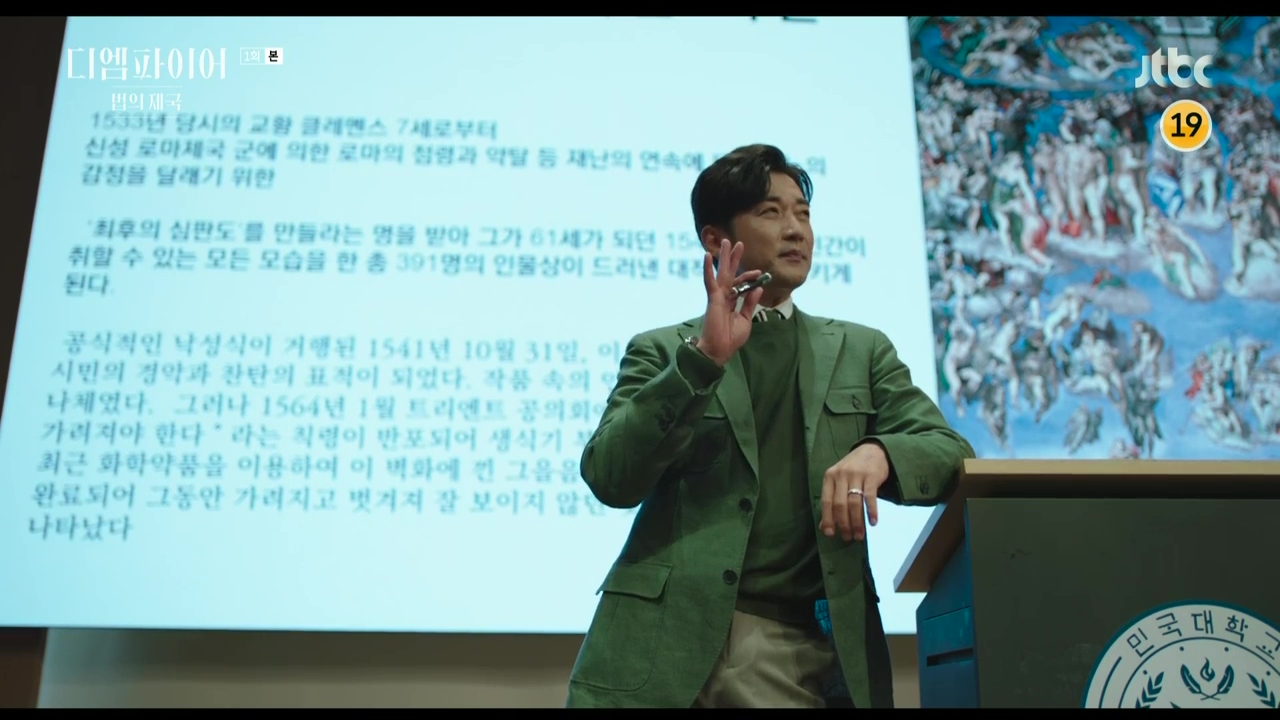 Before we meet our heroine, we meet her husband NA GEUN-WOO (Ahn Jae-wook). He’s clearly a man of power who commands respect — SNU grad, passed the bar exam in his 20s, was a judge, a lawyer, and now is a law professor who seems to enjoy being treated as a godlike figure. We first meet him at his book concert, where he is surrounded by adoring fans and the press, but the same motif continues into the classroom — and everywhere he goes, really. I don’t like him one bit.

But he seems like the perfect “national husband”? Our heroine HAN HYE-RYUL (Kim Sun-ah) comes home to their gorgeous house saying how tired she is and carrying on about the beautiful dinner he cooked for her. They’re quite cute and playful together and it’s all very nice… until the camera pans to widen the scene and we see that there’s a film crew shooting them. Yep, their very own chaebol reality program. Barf! 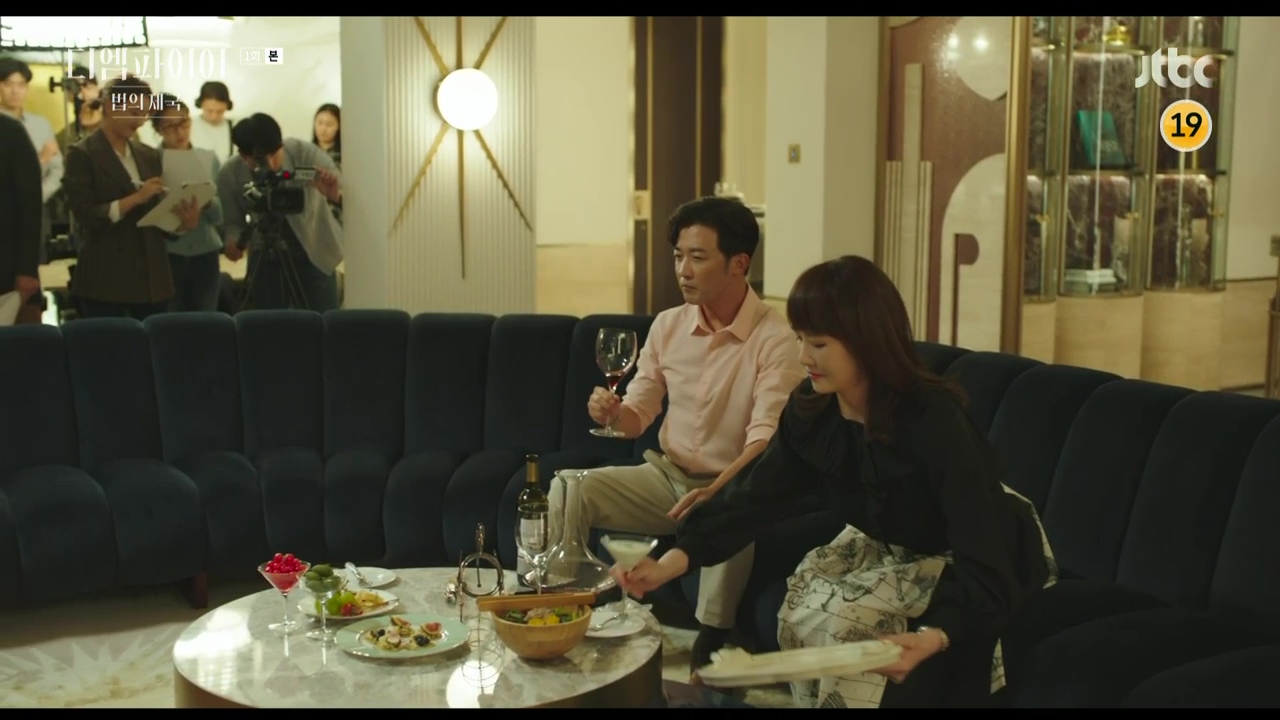 The show has done wonders for Geun-woo’s popularity and despite not being a politician he’s #1 in popularity for the next presidential race. Yeah, no. We’re shown in more detail than necessary that he’s having an affair with another woman — and that woman turns out to be a student in his class who has him wrapped around her finger. I’m totally getting A Couple’s World vibes here, and that doesn’t make any of this bode well.

Luckily our heroine is more likeable. Hye-ryul — or as she’s more commonly called, Prosecutor Han — is a real force to be reckoned with. She’s just as powerful and respected as her husband, but in contrast she seems to have some integrity behind her. When the drama opens, she’s deep in an investigation of a chaebol group that her family is in-lawed to. The reaction is either fury (her sister who married into the family in question) or respect (most everyone else, impressed that she doesn’t let “family” get in the way of justice). 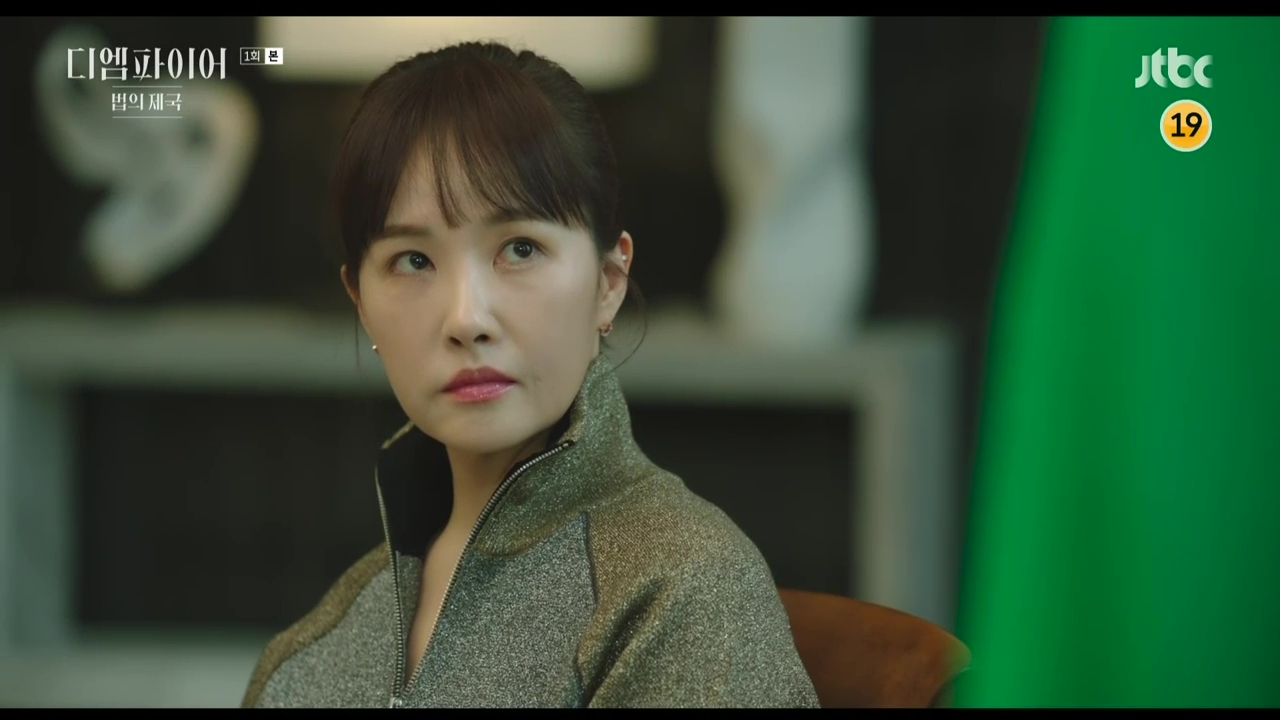 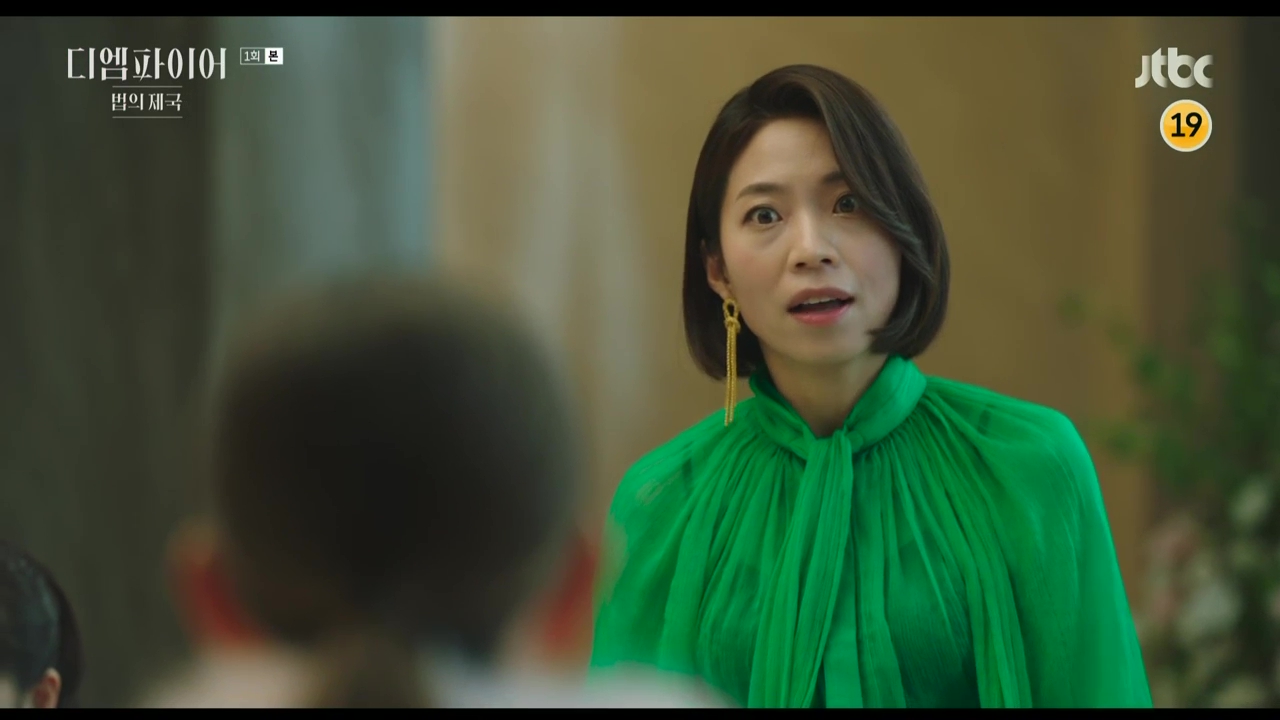 My favorite scene of the first episode was Hye-ryul out for drinks with a whole ton of prosecutors. After dealing with the taunts of a colleague (who claims she’s only fearless in her job because her family’s power can protect her), she subsequently outdrinks him. And by that I mean mixing somaek in a giant bowl worthy of bibimbap and downing the whole thing in one shot. Her colleague is dragged out barely conscious, and Hye-ryul stays behind for more drinks, and an oath about truth and justice that she has the newbies repeat after her. It’s clear she means every word she says, and it’s clear they respect her for it.

But we can’t have such a powerful, collected, and upright heroine without throwing her some problems — this is a drama after all – so there’s a terrible scene where she nearly finds her husband and his college student floozy HONG NAN-HEE (Joo Se-bin) having sex in a restroom during the intermission of a super fancy orchestra performance. Uh, thanks, JTBC? 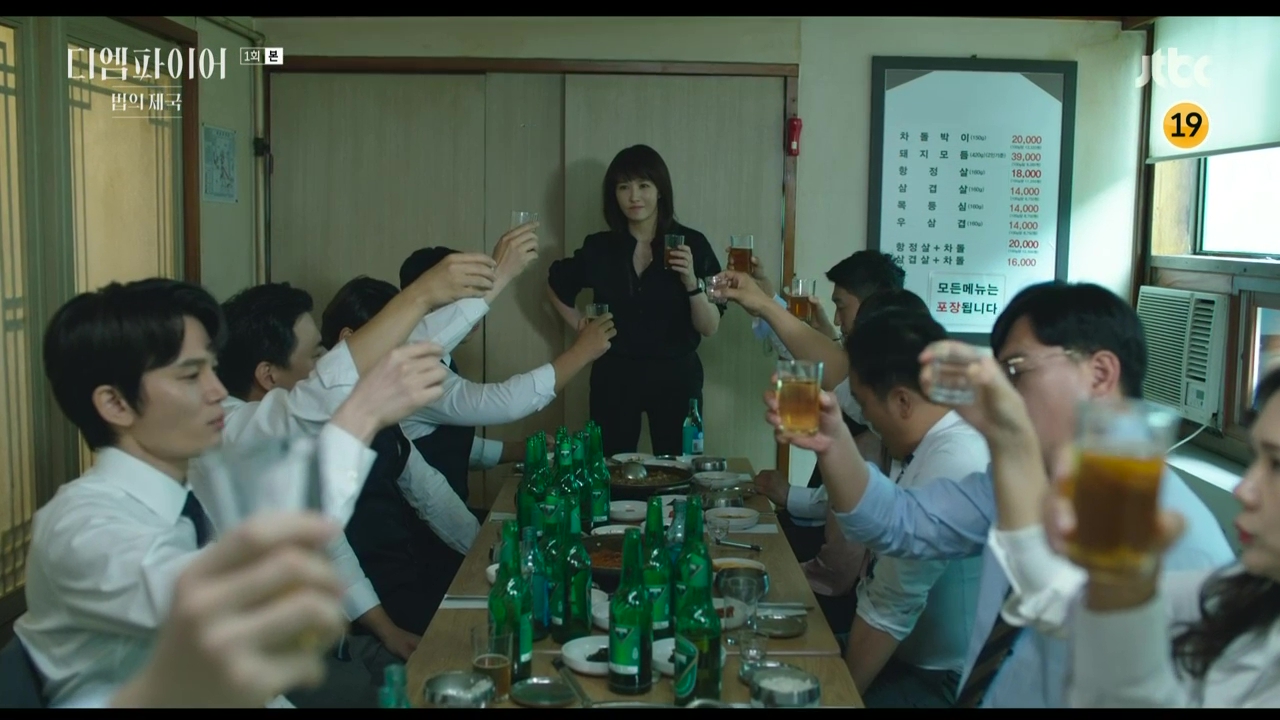 This is probably my least favorite thing about the story — not just the cheap affair, but the way the college student is so clearly manipulating Geun-woo, and so obviously going to burn his life down around him. He calls her his muse; she says she can be his shield, or his demon. Guess which one it’ll be by the end of this drama? And to further squickify things, Nan-hee seems to be friendly with and/or in the same class as Geun-woo and Hye-ryul’s son and his girlfriend.

Speaking of Hye-ryul’s family — it’s huge and confusing and they all live in the same palace-like dwelling. But for all the ridiculous wealth that they live in, they seem to be kinda normal? At least Hye-ryul and her mother (Lee Mi-sook) so far. In another nice scene, we see the two working away together late at night on Hye-ryul’s case. In another drama, they would be squirreled away at the kitchen table; in The Empire, they’re sitting at a gigantic banquet table that would have made King Arthur proud. 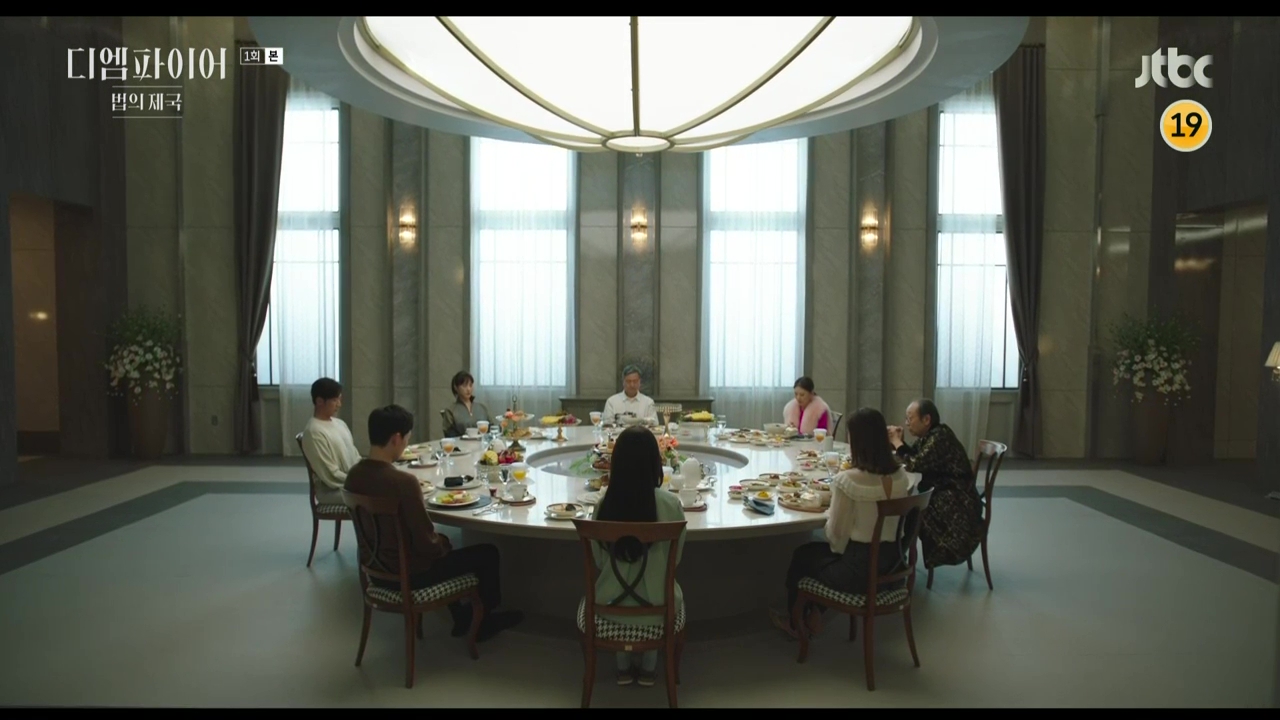 Without much action — but tons of character introductions and political/power setups which are too boring to drill into here — the first episode feels both overwhelming and underwhelming at the same time. There’s hope, though, by way of our other supporting characters. REPORTER YOON EUN-MI (Im Se-mi) seems to have an in with the police and some secret information that she drops to close the first episode. Geun-woo might be #1 in the popularity race for candidacy, but there’s another person who’s speeding up behind him at an alarming speed: Hye-ryul.

It’s meant to be a mic drop moment, and I guess maybe it can be, if we get more insight on Hye-ryul and how much she really knows, plans, and intends to do. But right now there’s not enough of the plot in motion to really say whether it’ll be satisfying to see Hye-ryul go after her husband and his scandal — or whatever other chaos waits around the bend.

If I’m going to watch a story of power struggles and vindication, well, there has to be some real emotion there in order for us to get behind it. Right now I’m not sure if Hye-ryul even really cares about her “perfect” husband, so will his scandal really break her? What does she want besides to do her job well? I think I need a little more emotional connection to these characters — any of them — if I’m going to follow them around for the entire drama, worry about the collapse of the eponymous “empire,” and root for the good guys’ success. Or in the case of Geun-woo, for his swift defenestration. 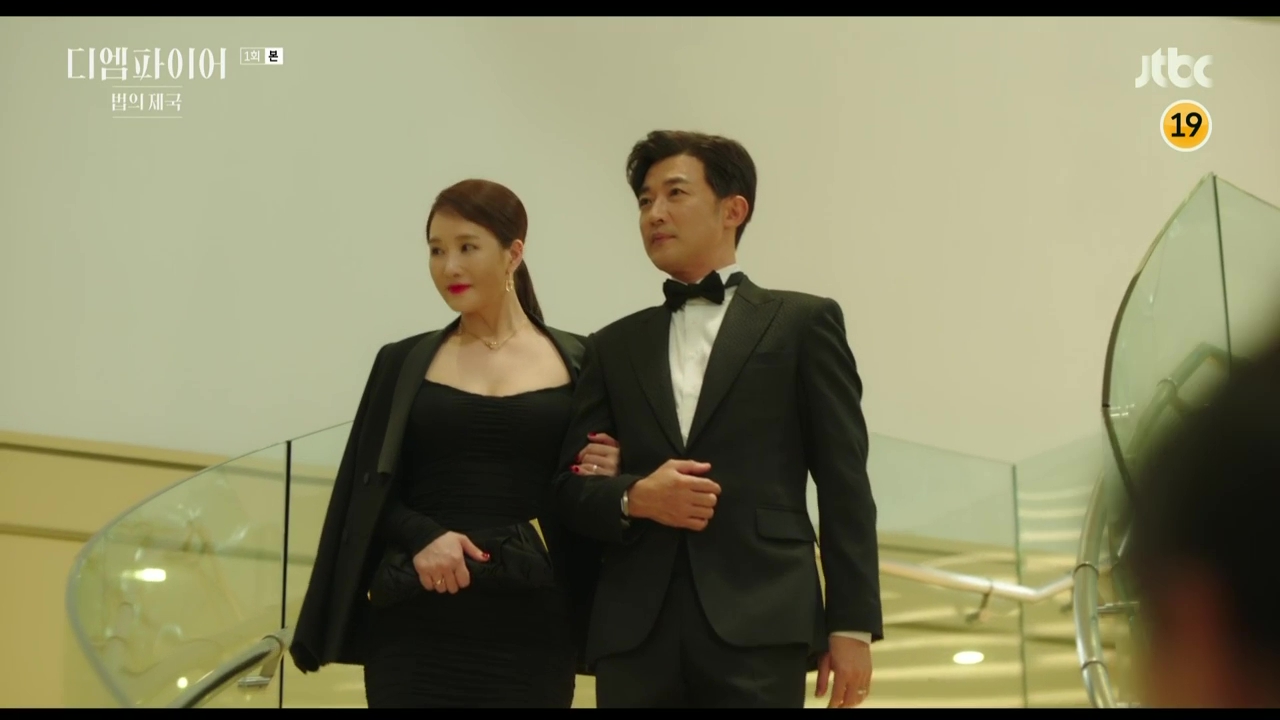 A wife gunning for the Blue House instead of it being just her preparing the way for her husband. This was a fresh one for me and yes, it was a mic drop moment. I hope both husband and wife see this race through to the end.

Most of this was typical chaebol tropes. However, as mentioned above the wife going for the Blue House is new. There is more interesting stuff in episode 2 that was interesting, so I will watch.

It has nothing that sets it apart from chaebol/ High income family dramas except the wife's ambition to Blue House.

I hope they run with this premises till the end. Unless the wife is unhinged, psychopathic murderer ; I am firmly on her side instead of the sleazy husband.

If you are aiming for highest elected position in country and have two brain cells to rub together, you should know not to have an affair where you would have everything to loose. He is either too entitled or too stupid.

@missvictrix This was the shortest first impressions of a drama I have read and I can sense that you are not invested in it, but am not complaining because my interest totally vanished as soon as I became suspicious of something brewing between the husband and the college girl.

Had they focused more on our leading lady and shown her strengths rather than the pathetic husband, this might have been refreshing because Kim Sun Ah has this powerful screen presence that can make any villain squirm and we all could have enjoyed the girl power. Dropped! Bye!

I hate this drama the empire this is totally shot how a student manipulating a professor and having an affair this is totally shot.i totally lost all the respect I have for kdrama.directors like this should be prohibited and also this story line. I hope this shot will not release furthermore.

I am watching it for Kim Sun Ah! The strength of her character is deep. I have not watched such dramas before, so I dont know anything about this plot. But I would like Han Hye Ryul to succeed after losing her husband.

I wonder if there will be a recap for this drama? well i guess not many viewers watching it due to the low rating. hm. ;/

Will you be uploading the recap of the episode 2?

i just finished episode 13 and this drama is nothing like what you all have stated after the first or second episodes... it's intriguing, because the story has shifted after each couple of episodes in directions you would not have expected...

people are missing out on this one. it started one way, i agree, seemingly like another makjang drama about self-entitled chaebol family members... but it has taken turns and TWISTS like all getout...